Perhaps some film studies undergraduate could write a thesis on aggressively serious filmmakers who decide it would be a good idea to tackle a comedy. There was John Frankenheimer with The Extraordinary Seaman in 1969 in the middle of a very long run of serious dramas and dark-toned thrillers. Then there was Otto Preminger towards the end of a very long, often prestigious career, with the baffling Skidoo in 1968. But was there anyone in Hollywood in the ’50s and ’60s more serious than Stanley Kramer, one of the iconic figures of liberal social issues filmmaking (the kind of thing that infuriated conservatives who tended to see Tinseltown as a threat to the American way of life because it dared to suggest that things might need to change). In 1963, at the end of an award-winning five-year run – The Defiant Ones (racism), On the Beach (nuclear threat), Inherit the Wind (the 1925 Scopes monkey trial), Judgement At Nuremberg (Nazi war crimes) – Kramer decided that he wanted to make the comedy to end all comedies. Arrogance? Hubris? It was an ambition that laid him open to great critical risks and in the event, although it turned out to be the year’s second-biggest box office hit, it was almost universally lambasted by reviewers. 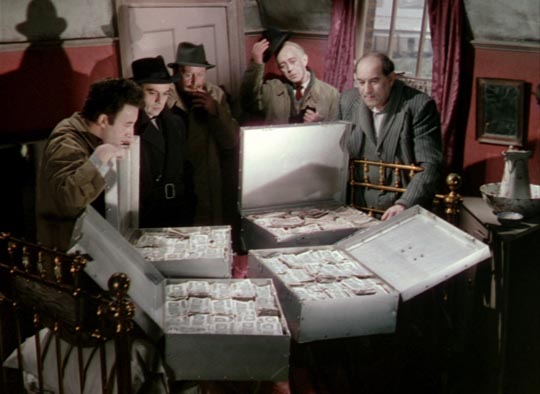 Alec Guinness and his gang contemplate their loot in The Ladykillers

Kramer worked from a script by the great William Rose, an American who in the ’50s had worked in England, particularly at Ealing Studios where he wrote the script for the studio’s crowning masterpiece, Alexander Mackendrick’s The Ladykillers. It’s illuminating to compare It’s a Mad. Mad, Mad, Mad World with that blackly funny tale of greed, innocence and self-destruction. Kramer’s epic (originally a 202-minute roadshow presentation, later cut to 163 minutes for general release) is also about a group of people driven to self-destruction by greed, but without the sharp focus of the Ealing film and with its larger intention to provide a showcase for virtually every radio, television and movie comic then working, its sprawl devolves into a seemingly endless string of skits and set-pieces barely held together by a thin narrative thread.

The occupants of four vehicles driving through the Mojave desert witness a car crash and find the driver broken and dying at the bottom a ravine. Gangster Smiler Grogan (Jimmy Durante) had been racing ahead of the cops to collect a stash of loot he’d buried fifteen years earlier. He gives the witnesses clues to the money’s location before (literally) kicking the bucket. From then on, after a few efforts to figure out how to cooperate in the quest, the group splits into fragments, each determined to get the money before the others. The movie becomes a three-hour cross-country chase marked by occasionally impressive vehicular mayhem, occasionally snappy verbal gags, and a lot of strenuous slapstick.

As a compendium of comedy styles, Mad World has interest – like a museum exhibit – but as directed by Kramer, no matter how hard the vast cast performs, it remains an idea of comedy rather than an actual comedy. The impression you get, as in Skidoo, is of a deeply humourless director who has studied comedy in all its common forms and then reverse-engineered what he has seen into a film of his own, but without any indication that he actually knows what makes it all funny; Mad World is all mechanics without instinct. This leaves his cast pretty much on their own, doing what they have done before, trying to inject humour into the proceedings despite the lack of support. Jonathan Winters, Ethel Merman and Terry-Thomas come off best, with Dick Shawn adding some amusing flavour, but Mickey Rooney and Buddy Hackett mug to the point of exhaustion and the legendary Sid Caesar can’t make much of his part, a huge chunk of which is restricted to ponderously mistimed slapstick in a hardware store basement. Almost every gag is played at least twice, and dragged out to the breaking point in each iteration.

What’s surprising is how many individual moments manage to survive as amusing, even at times actually funny, despite the directorial anvil tied around their necks. Kramer had no sense of comic timing, apparently no sense of how a gag needs to be shaped and built, and even the best parts tend to outstay their welcome, and the sour subtext about the venality of ordinary people tends to get lost in the noise (again, compare this to the taut structure of The Ladykillers).

It’s a Mad, Mad, Mad, Mad World has a lot of fans, though I suspect many of them treasure it for preserving a record of such a large group of comedians in one place; despite the original critical bashing, it has remained popular enough that Criterion has been inspired to release it in a five-disk, dual-format edition which includes the shorter general release version as well as Robert Harris’ “virtual” reconstruction of the roadshow cut. A full restoration is impossible because, after the film was cut down, the excised material was mostly destroyed. Harris uses stills accompanied by soundtrack elements, silent images with dialogue in subtitles, even once a section with Japanese subtitles. The reconstruction is like a giant jigsaw with a few pieces still missing, but while it occasionally provides some smoother transitions between sections which the original cut-down merely jammed together, much of the reinstated material merely adds more length, stretching scenes which were already longer than they needed to be.

Interestingly, after Mad World, Kramer never regained the prestigious position he had previously held and his subsequent work (apart from the dubious success of Guess Who’s Coming To Dinner) reveals a director floundering in search of an audience in a world which has moved on without him. Which is not to say that his epic didn’t have an influence on subsequent film comedy; it was followed by a number of similarly overloaded movies, packing large casts into episodic structures, from Ken Annakin’s Those Magnificent Men in Their Flying Machines and Blake Edwards’ The Great Race to John Landis’ The Blues Brothers. Perhaps not surprisingly, these various step-children are almost all much more creatively successful than Kramer’s movie, made as they are by filmmakers with actual comic abilities.

Criterion’s edition includes a commentary on the longer version, which I haven’t listened to yet; a featurette with Craig Barron and Ben Burtt about visual and sound effects; an episode of a talk show hosted by Kramer in 1974 featuring several of his stars discussing the film and comedy in general; clips from an AFI program in which a number of comedians talk about the film’s influence; a two-part verite documentary (tediously exposing the limitations of that form) made for Canadian television, covering the film’s extravagant press tour and premiere; extensive clips from press interviews featuring many of the stars; a collection of Stan Freberg’s TV and radio ads for the film … and a few other things. But I’m afraid all this supplementary effort fails to convince me that Mad World really is a comedy masterpiece. 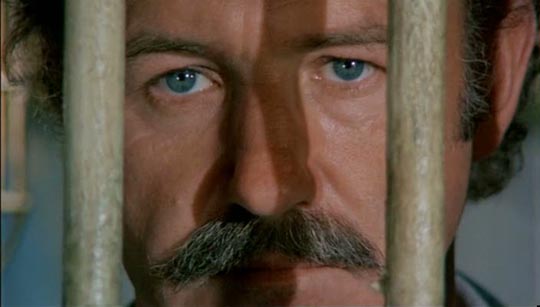 By coincidence, just after re-watching Mad World, I came across Kramer’s second-last feature, The Domino Principle (on a double-feature Blu-ray with George Pan Cosmatos’ The Cassandra Crossing). Made in 1977, it came a few years after the heyday of ’70s paranoid thrillers (Klute, The Parallax View, Three Days of the Condor, All the President’s Men, Night Moves, The Long Goodbye, etc). As with his approach to comedy, Kramer seems to have looked at those films, dissected the mechanics of their plots, and then attempted to recreate them without any deeper understanding of what powered them. 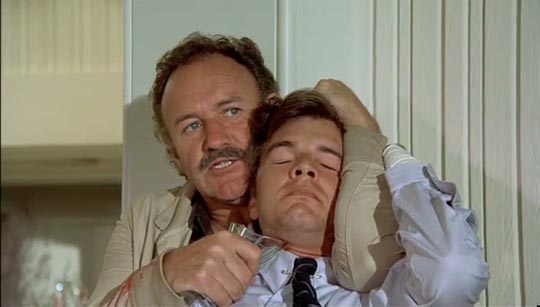 Gene Hackman plays Roy Tucker, a man serving a sentence for murder (though he may not actually have committed the crime); he finds himself recruited by some shady characters who may or may not be with the government (Richard Widmark, Edward Albert, Eli Wallach), who spring him from prison with the help of the warden. He’s then groomed for some plot which is never explained to him, although it eventually turns out that he’s to be used in an assassination. Nothing is ever clarified and the behaviour of the plotters becomes increasingly ridiculous – Hackman is flown to the assassination site (a remote house in the country) in a helicopter, with big boss Wallach along for the ride; after the target is killed, the security men on the ground shoot down the helicopter and Hackman and Wallach barely escape alive. Turns out Hackman actually shot into the ground and the target was killed by two other snipers placed on a nearby hillside. All of which makes no sense – if they had those other gunmen as backup, why use Hackman at all? And why expose themselves by riding along in the helicopter? Doesn’t that negate the whole idea of using Hackman as a patsy? The whole film is rife with this kind of nonsense. 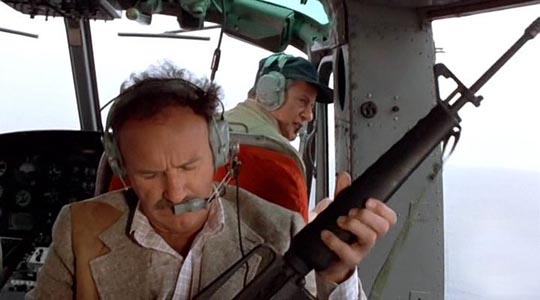 But Kramer obviously believed that he was doing more than making just a pulp thriller. The movie opens with a long prologue which seems to emulate Orson Welles’ prologue to The Trial with the parable of the man before the law; in The Domino Principle we get a turgid speech about the secret sinister forces which control all our lives and against whose schemes we are all helpless … but then, not only are these secret forces constantly running around badgering Hackman, they all go along on the job, rather negating the whole point of being secret-behind-the-scenes-forces.

Kramer’s work always lacked subtlety and nuance, but in the early part of his career his choices of subject matter lent themselves to a didactic approach. Those films came out of the clearly defined ideological conflicts of the ’50s with liberalism confronting the reactionary forces unleashed by the Cold War; those conflicts paradoxically created a kind of social stability. But in the ’60s that all started to come apart and Kramer found himself without a clear position from which to work and his earnestness fluctuated between attempts to deal with those new unstable conditions – changes in racial attitudes (Guess Who’s Coming to Dinner), youth revolt (R.P.M., Bless the Beasts and Children) – and attempts to make popular entertainment (The Secret of Santa Vittoria, Oklahoma Crude). Perhaps those early films are actually no better made than the later ones; they just appear to be because they’re more securely rooted in the time of their making.