Like many people of my generation, I was first introduced to silent comedy – to silent film, in fact – by television showings of the Keystone Kops and other early shorts. And, as for many others back in the early ’60s, the first silent personality I really became aware of was Chaplin – the dance of the dinner rolls; cooking and eating his boot in a bleak mountain cabin; walking away down a dusty street jauntily swinging his cane. I was quite a bit older when I finally encountered Keaton and found him replacing Chaplin in my slowly evolving sense of film history. Chaplin and Keaton back then were the silent comedy equivalents of the Beatles and the Rolling Stones; they tended to provoke people into “choosing sides”. I found that there was something cloying in Chaplin which gradually put me off (although still recognizing the brilliance of his comic constructions); the feeling that he rather desperately wanted the audience’s love and admiration, a neediness which seemed the antithesis of Keaton’s cool self-sufficiency. At its most basic level, this was a difference between technique rooted in emotion and technique rooted in intellect. Chaplin wanted you to feel; Keaton (like Jacques Tati later on) wanted you to become aware of the existential mechanics within which we are all obliged to live.

For a long time, those two giants defined the scope and possibilities of silent comedy for me. And yet, in their day neither of them was the most successful cinematic comedian. That title belonged to Harold Lloyd, someone whom I would only become aware of many years later, and whose films never seemed as widely available as Chaplin’s and Keaton’s. The Criterion Collection, with last year’s release of Lloyd’s Safety Last! (1923) and now their new edition of The Freshman (1925), have made it possible to get a clearer sense of Lloyd’s similarities to and differences from his contemporaries, with the two disks together providing an expansive course in Lloyd’s life and work.

Lloyd was, and still is, renowned for the meticulous construction of gags which build and build with a relentless logic. Many of these escalating sequences involved stunts which appear so dangerous that no star today would be allowed to perform them. Perhaps the most famous of these sequences is the second half of Safety Last! in which Lloyd as a timid store clerk has to climb the outside of a tall building. Although there were a number of techniques used to create a seamless illusion of precarious height, it really did involve Lloyd performing finely tuned bits of comic business high off the ground. The mix of comedy with genuine fear evokes a different feeling from, say, Keaton’s famous falling building gag in Steamboat Bill; as dangerous as Keaton’s gag was to perform, it has a lightness on screen which erases the real physical danger the performer was in, and it plays as an almost throw-away visual moment, that casualness being what makes the audience laugh. But there’s a meticulous attention to realism in Lloyd’s stunts which emphasizes rather than conceals the danger; in this perhaps Lloyd has had no peers other than Jackie Chan in his early films. 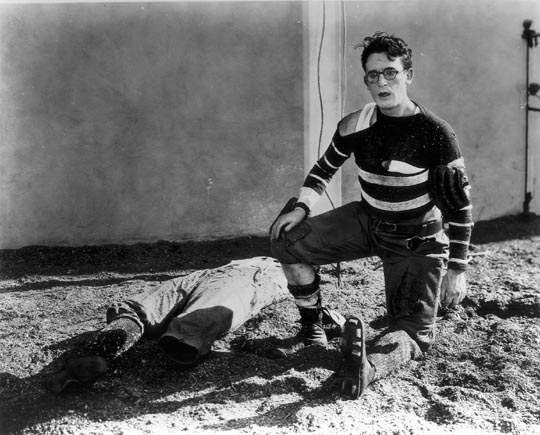 With only limited exposure to Lloyd’s work, this is the primary image I had of the comedian. Which is why The Freshman struck me as disconcerting on a first viewing. Here there were no extended comic sequences built on increasingly dangerous stunts. This is more of a character comedy – and perhaps more than Safety Last!, it reveals Lloyd’s considerable talents as an actor. This character, unlike the screen personae of Chaplin and Keaton, is an ordinary guy, not an archetype, which perhaps explains Lloyd’s popularity in the ’20s – unlike the other two, he seemed just like the people in his audience. The Freshman, his most commercially successful film and the year’s third biggest grosser, is a story of social aspiration, of a young man full of baseless self-assurance who’s determined to become the most popular man on campus. Ironically, Harold Lamb takes his pointers for this ambition from a movie – one of the film’s running gags involves a ridiculous little jig he has learned from “Lester Laurel” in The College Hero as a greeting which he uses whenever he meets someone new.

In the ’20s, the idea of college was deeply embedded in the middle class mind as a key to social standing; significantly, there’s no indication in the film that college has anything to do with education; its only apparent function is the granting or withholding of social validation, and in his eagerness Harold strives too hard and exposes himself as not a natural member of this cliquish society. As Kevin Brownlow points out in one of the disk’s extras, The Freshman is a “comedy of embarrassment” and one’s personal response to Harold’s social ambitions will govern the degree of one’s appreciation for the comedy. The audience, along with every other character in the movie, knows that Harold is acting a part, pretending to be someone other than himself in order to fit in; for the comedy to do its work, the viewer needs to be in full sympathy with his ambitions, while the characters all view him as a colossal boob. At our distance from the time in which the movie was set (and made), Harold’s desperation to achieve social acceptance, for me at least, seems more irritating than admirable, particularly as the society he wants to join is shown for the most part to be shallow and mean-spirited. Although Peggy (Jobyna Ralston), the socially “inferior” nice girl Harold falls in love with, eventually convinces him that he should stop trying to be something other than himself – and in the film’s final moments he does attain a triumphant success – even being himself at last, rather than freeing him from those social aspirations, gains him exactly the social acceptance he has been so desperate for all along.

The other great comedians always stood against society and the world, forging their own way and beating reality into a shape of their own making; Harold Lloyd in contrast goes through his struggles on the way to finding his proper place in a world which shapes him. This perhaps explains why he was far more successful at the box office than Chaplin and Keaton: he really did represent the ordinary guy and offered a point of identification for an audience which, like the character Harold, had no power to change the world, but might just manage to find a place within it along with a bit of admiration from his peers and the love of a sweet girl.

But despite feeling a certain antipathy for the character, there is much I can admire in The Freshman. Lloyd, although avoiding big set-pieces built on dangerous stunts, constructs a series of scenes which are predicated on elaborately conceived chains of detail which build to inexorable comic conclusions – not just the Fall Frolic in which he must deal with a new suit which has not been properly stitched together or the climactic football game, but his early attempt to give a speech to the student body while dealing with a frisky kitten and the physically brutal training session in which the team uses Harold as a tackling dummy. Although directed by long-time Lloyd collaborators Sam Taylor and Fred Newmeyer, as with all the great silent comedies, The Freshman is primarily the creation of its star, and it exhibits the precision of construction Lloyd was famous for.

Criterion’s 4K transfer of a 1998 restoration by the UCLA Film and Television Archive is virtually pristine (I noticed only a few minor scratches), looking much as it must have when originally projected in 1925. The new score composed by Carl Davis is lively and well-attuned to the star’s personality. As is now standard with Criterion, this edition is dual-format, with one Blu-ray and two DVDs.

Once again Criterion has loaded the disk with interesting and informative supplements. The audio commentary features a lively and admiring discussion of the film and Lloyd’s career by Harold Lloyd archivist Richard Correll, film historian Richard Bann and critic Leonard Maltin. A conversation between Correll and Kevin Brownlow (39:48) in its obvious deep affection for Lloyd, with whom both men had a long friendship, helps to clarify the nature of Lloyd’s comedy and the reasons for his popularity – he really was a likeable and accessible guy. A visual essay by John Bengtson, Harold Lloyd: Big Man On Campus, explores the various locations on which the film was shot; the climactic football game was filmed in three different stadiums, much of it grabbed quickly before a game or during half-time, a fact which makes the precision of the comic business on the field even more remarkable. Footage from a 1963 tribute to Lloyd features an on-stage conversation between the amiable comedian and Jack Lemmon, Steve Allen and Delmer Daves (29:21). There’s also a brief clip (6:31) of Lloyd on a 1953 episode of What’s My Line? during a promotional tour for a re-release of The Freshman.

Most valuably, the disk includes a lengthy excerpt from Harold Lloyd’s Funny Side of Life (1966, 29:37), a compilation of clips from many of his films highlighting some spectacularly elaborate and hair-raisingly dangerous stunts, and three early shorts in which Lloyd was developing the “glasses” character (named for the signature horn-rims he wore in all his subsequent films). The Marathon (1919, 13:58) is a one-reel chase comedy; the two-reel An Eastern Westerner (1920, 27:37) has the wastrel son of a wealthy family sent west, where he inadvertently gets in trouble with a gang of hood-wearing enforcers and falls for a girl who’s been targeted by the gang’s boss; and High and Dizzy (also 1920, 27:15) is something of a trial run for Safety Last!, with a drunken Lloyd stumbling around precariously on a high ledge. For anyone who has a problem with heights, this last is quite terrifyingly funny.

The pleasures of transgression