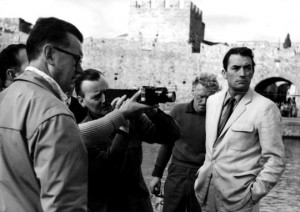 Oswald Morris (l) on The Guns of Navarone

The great English cinematographer Oswald Morris, whose work in both colour and black-and-white added enormously to the films he worked on. He had a long and fruitful association with John Huston (his work on Moulin Rouge in 1952 pushed the boundaries of what Technicolor was supposed to be able to do), and also shot several crucial films of the British new wave in the late ’50s and early ’60s (particularly Look Back In Anger and The Entertainer for Tony Richardson); but apparently there was friction between Morris and Stanley Kubrick on Lolita. He was at home working on big commercial movies and small intimate dramas, shooting J. Lee Thompson’s The Guns of Navarone in 1961, Peter Glenville’s Term of Trial in 1962 and Jack Clayton’s The Pumpkin Eater in 1964. and surprisingly ended his thirty-plus year career with Jim Henson’s The Great Muppet Caper and The Dark Crystal in the early ’80s. Though I just re-watched Huston’s magnificent The Man Who Would Be King (shot by Morris in 1975) and recently saw Huston’s The Roots of Heaven (1958) for the first time, my favourites among Morris’ work are Martin Ritt’s The Spy Who Came In From the Cold and Sidney Lumet’s The Hill (both 1965), two of the most stunning black-and-white films ever made. Oswald Morris was 98. 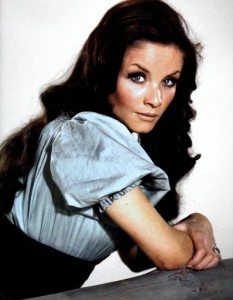 Kate O’Mara, the English actress with prominent cheekbones and sultry eyes, had a very long career in television in England and the States, where she was best known for her character Cassandra on Dynasty. Her looks made her ideal for late-era Hammer, but she only appeared in two of the studio’s movies, The Vampire Lovers and The Horror of Frankenstein (both 1970). She also appeared as Sue Lloyd’s concerned sister in Robert Hartford-Davies’ Corruption (1968), recently released on Blu-ray. Despite her striking looks and undeniable acting ability, she spent most of her career in supporting roles. Kate O’Mara was 74. 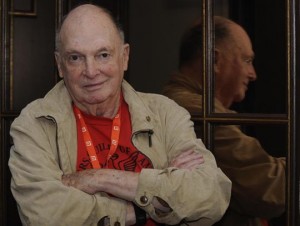 Lorenzo Semple Jr started as a writer in television in the mid-’50s, striking it big in 1966 when he created the campy Batman TV show; but his finest script was probably for Noel Black’s Pretty Poison in 1968. Although he co-wrote two of the best paranoid thrillers of the ’70s – Alan Pakula’s The Parallax View (1974) and Sidney Pollock’s Three Days of the Condor (1975) – the campy sensibility of Batman proved detrimental to the disastrous remake of King Kong (1976) and transformed Flash Gordon (1980) into a perennial cheesy delight. Back in 1984, while staying with a friend in Los Angeles, I had an opportunity to read a script Semple wrote based on one of my favourite SF novels, Alfred Bester’s The Stars My Destination, and I can only say that I’m glad it was never made because he had smothered what should have been a gritty space opera with the same kind of smart-ass nonsense he’d applied to King Kong. Lorenzo Semple Jr was 91.