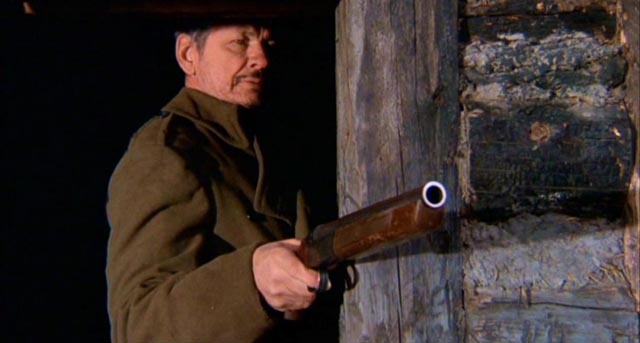 Charles Bronson as the “mad trapper” in Death Hunt (1981)

I didn’t see Death Hunt when it was released in 1981, but I seem to recall that it wasn’t well reviewed – at least not here in Canada. It was one of those tax shelter movies which offended our sense of national identity by trying to look like something produced by Hollywood. Financed by Raymond Chow’s Golden Harvest (Hong Kong money), executive produced by Albert Ruddy (The Godfather among many others), written by a pair of Americans (Michael Grais and Mark Victor), directed by an Englishman (Peter Hunt, an editor whose sporadic directing career started with On Her Majesty’s Secret Service in 1969), starring two big Hollywood names (Charles Bronson and Lee Marvin), with Canadian actors relegated to small supporting roles, there’s very little sense of a Canadian identity in the finished film. And yet it’s based on an actual historical incident which occurred in the Northwest Territories and Yukon in the early ’30s. Very loosely based, that is, in its attempt to transform that incident into a very American statement about rugged individualism and the need for a man to stand his ground on a lawless frontier. In the film, the Canadian history of an organized, cooperative community working together to contain an irrational, violent threat has been transformed into the American myth of a strong, peaceful individual driven to rightfully protect himself against an irrational, violent community. 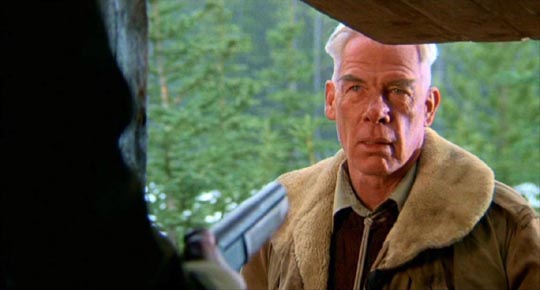 The identity of the real “Mad Trapper of Rat River” is still a mystery. Known as Albert Johnson, he may have been Scandinavian, but he ended up in the remote Northwest Territories where he built a tiny cabin on the Rat River. Other trappers accused him of sabotaging their traps and two RCMP constables went to question him. When he refused to cooperate, they returned to Aklavik to obtain a search warrant (yes, this was the Canadian frontier, not the American west). When they returned with the warrant, Johnson shot through the cabin door and wounded Constable Alfred King. 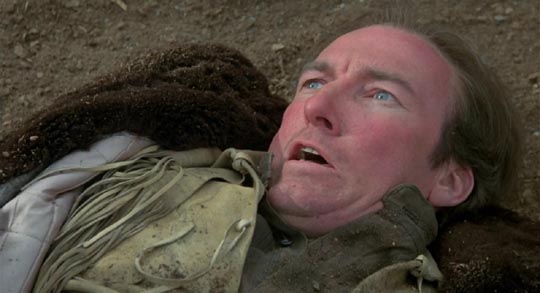 Ed Lauter as the villain

A posse was formed and an attempt was made to dynamite Johnson out of his cabin, but he’d created a dug-out for himself and survived the blast, and held the posse off with gunfire. Thanks to radio, the incident became a media event; the posse grew larger and Johnson disappeared into the wilderness. A month-long hunt ensued as he covered 240km on foot through the snow before a final showdown on the Eagle River in the Yukon, where Johnson was shot to death. 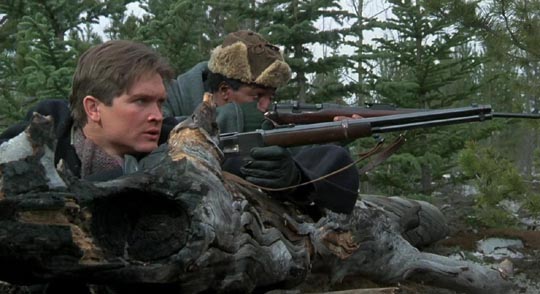 Death Hunt retains some of these details, but invents more. Charles Bronson as Albert Johnson arrives in the north looking for some peaceful isolation, but the locals are a bunch of redneck jerks. When Johnson rescues a seriously injured dog from a brutal dogfight, the animal’s owner, Hazel (Ed Lauter), gets his friends together to teach the stranger a lesson. But Johnson being Bronson, the attempted ambush ends badly for the gang, with one left dead. Hazel insists that the local RCMP sergeant (Lee Marvin as Millen) arrest the killer, claiming that the killing was unprovoked. 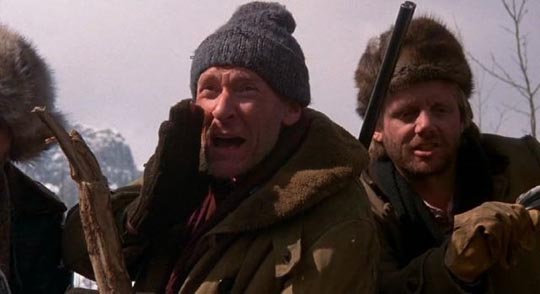 Although Millen knows the story is a lie, and generally likes to live a quiet life, spending his time boozing and having sex with local native women, he attempts to take Johnson in. But his peaceful effort is ruined when one of the accompanying gang tries to shoot the trapper, setting off a firefight which leaves several dead. The cabin is blown up, Johnson escapes, and the cross-country hunt begins. 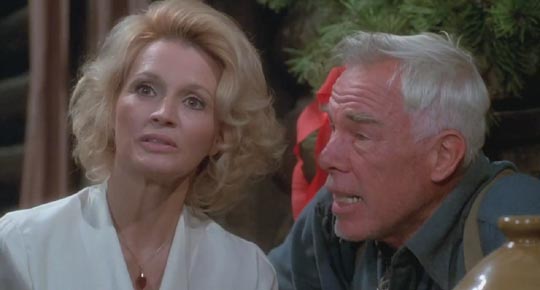 Angie Dickinson in a thankless role

In reality, Edgar Millen was a mere constable and he was shot to death by Johnson on January 30, 1931. The scriptwriters have transformed the ill-fated young policeman into a grizzled older man who mirrors the film’s Johnson – we learn nothing about either man’s background, only that both have retreated to this wilderness looking for peace and a quiet life, classic figures from the western who see the world moving on past them and don’t like the look of the future. 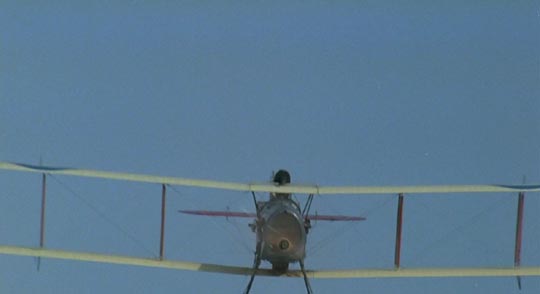 That future is most pointedly represented by Scott Hylands as a Royal Canadian Air Force pilot who arrives in his bi-plane, mounted with machine guns, to prove that men on foot are no match for modern technology. This arrogant man disregards the safety of everyone on the ground, eventually shooting up the posse in his efforts to kill Johnson from the air and meeting an explosive end himself. In reality, this character was actually a prominent aviator named Wop May, not a military man, and he used his aircraft (a monoplane, not a biplane) not simply for spotting from the air, but also for ferrying a wounded man back to town, saving his life. It was May’s aerial surveillance which eventually enabled the pursuers to locate Johnson. 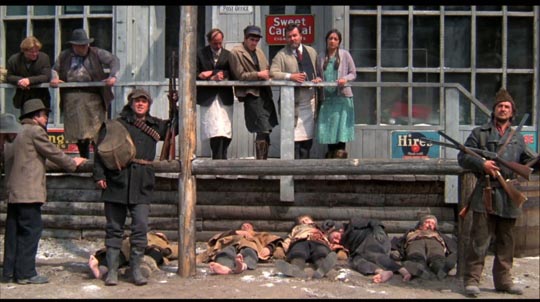 The myth scriptwriters Michael Grais and Mark Victor are working with here is the same one Sam Peckinpah revisited in a number of films, particularly The Wild Bunch and The Ballad of Cable Hogue, a lament for the displacement of rugged individualists by the dubious progress of a civilization which was creating a world in which they had no place. Like Pike Bishop and Deke Thornton in The Wild Bunch, there’s a bond of admiration and identity between the two antagonists of Death Hunt, a recognition that who they are can only end in a final connection through death. Except that in Death Hunt, civilization is staved off for another moment and Millen contrives to help Johnson escape across the mountains to Alaska through the convenient device of invented character Bill Luce (Henry Beckman), a killer whose own death provides the necessary cover for Johnson’s disappearance. 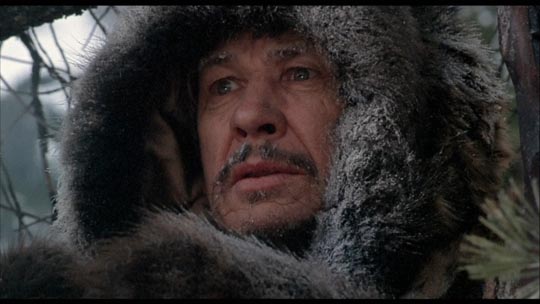 But of course, movies are really not about the facts or historical accuracy. What matters is the business of entertainment and, despite the national offense to Canadian identity, Peter Hunt and his writers have fashioned a rousing adventure from the story of Albert Johnson. But in all its essentials, this is an American story, not a Canadian one and one suspects that if it hadn’t been for the tax shelter requirements, it would have been better set in the mountains of Colorado rather than Canada’s far north.

The inexpensive Shout! Factory/Timeless Media Group Blu-ray edition of this 20th Century-Fox movie includes a brief interview with Albert Ruddy in which he basically runs down a list of the cast to say how great everyone was, plus two commentary tracks – one with the two writers, the other with three members of the cast: Andrew Stevens, Len Lesser and William Sanderson.

I was surprised to discover, during the opening titles, that I have only a couple of degrees of separation from Lee Marvin and Charles Bronson, as Death Hunt was photographed by Jimmy Devis, whom I got to know while working on Dune back in 1983; he was second unit director on David Lynch’s sci-fi epic.