The completist impulse is a key element of the collector’s mentality. For instance, I have forty-nine of Hitchcock’s features on DVD, plus his two Second World War propaganda shorts and season one of Alfred Hitchcock Presents. It’s not that I like all his films – in fact, I know I won’t ever watch some of them again (I now find both his 1956 remake of The Man Who Knew Too Much and – sacrilege! – North By Northwest too irritating to sit through) – but I like having them all on the shelf.

I have all the Dreyer, Murnau and Lang I’ve been able to get my hands on, twenty-five Mario Bava titles and even nineteen of Lucio Fulci’s. So the impulse spans a pretty wide range in terms of quality and respectability. Because Anthony Mann was such an interesting filmmaker, I’ve even gone out of my way to pick up disks of his last two, poorly regarded movies, A Dandy In Aspic (1968) and The Heroes of Telemark (1965), and when, in the wake of the re-release of A Night to Remember, I just came across a previously unknown title by Roy Ward Baker, Flame In the Streets (1960), there was no question that I had to have it.

I’m totally aware that this impulse frequently leads to a waste of money, but I’m powerless to resist! 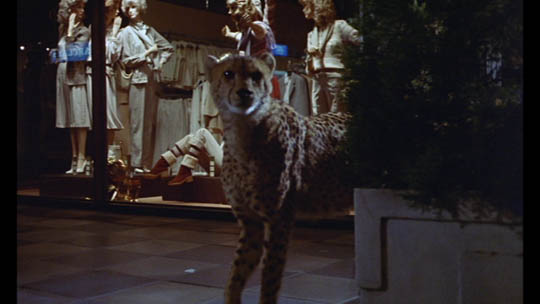 It was only recently that I realized that Blue Underground’s 8-disk Mondo Cane Collection (2004) didn’t represent the complete works of Gualtiero Jacopetti and Franco Prosperi. So when a German edition of their Voltaire adaptation Mondo Candido (1975) turned up in a Diabolik DVD newsletter, I immediately ordered it; then, in the extensive supplements to that film, I discovered that Prosperi had subsequently gone on to make one more movie by himself, and that too was available from the same German company, Camera Obscura, so I had to have that as well.

Wild Beasts (1984) is unlike anything Prosperi was involved in with Jacopetti. Although many critics saw the pair’s documentaries as exploitation, those films, from 1962’s Mondo Cane to 1971’s Addio zio Tom, while packed with shocking images and at times incendiary ideas, nonetheless were often built on a foundation of serious ideas. Wild Beasts, however, is unashamedly a piece of Euro-exploitation. Shot on location in Hamburg and made as a favour to Prosperi’s nephew, it’s a nature’s revenge horror movie in which a water supply polluted with PCP drives all the animals at the city zoo into a killing frenzy. 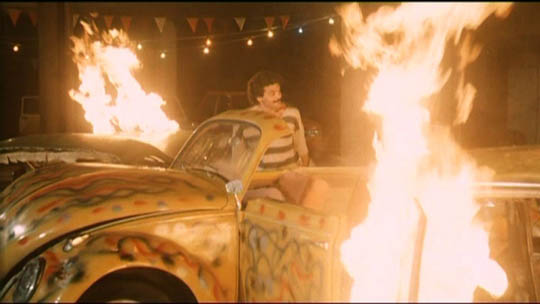 All the security measures at the high-tech zoo manage to fail at the same time and the animals are released from their cages, at first shredding the nightshift employees, then heading out to wreak havoc in the city. The police call in animal expert Rupert Berner (John Aldrich) and his companion Laura Schwarz (Lorraine de Selle) to help sort out the mess. The acting is pretty much what you’d expect in this kind of potboiler, and beyond some clunky dialogue about irresponsible human behaviour bringing this mini-holocaust to town, there are no signs of any serious purpose behind the mayhem.

What there is, though, is some occasionally haunting imagery of the animals roaming the city streets and some extremely disturbing real violence to animals, one of those uncomfortable cultural differences between Continental and Anglo-American filmmaking. 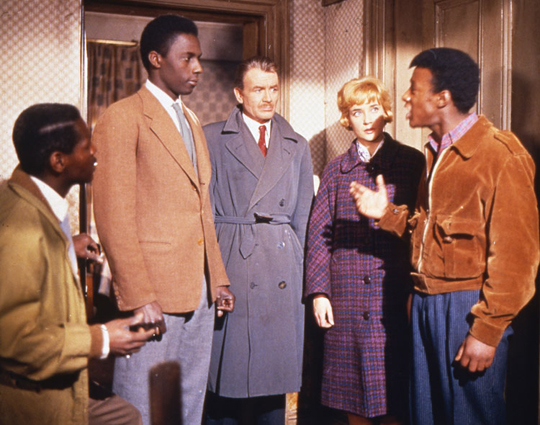 There are, of course, differences even between British and American film. Hollywood often finds it necessary to soften difficult issues for fear of offending some segment of the audience. Racism has always been one of those tricky subjects. Stanley Kramer tackled the issue more than once, particularly with the somewhat allegorical thriller The Defiant Ones (1958) and the liberal middle-class Guess Who’s Coming to Dinner (1967). Flame In the Streets, written by Ted Willis and directed by Roy Ward Baker, makes no effort to make the subject comfortable. Although the set-up is vaguely similar to Guess Who’s Coming to Dinner, with young teacher Kathie Palmer (Sylvia Syms) falling in love with her Jamaican colleague Peter Lincoln (Johnny Sekka), her family isn’t complacent and middle class. Her father Jacko (John Mills) is a union organizer who’s currently fighting prejudice in a local factory where a black man is in line to be made foreman against the wishes of many of the white workers. Jacko makes an impassioned speech against the very idea of racial prejudice and swings the vote in favour of Gabriel Gomez (Earl Cameron), only to be confronted immediately afterwards by his daughter’s relationship. 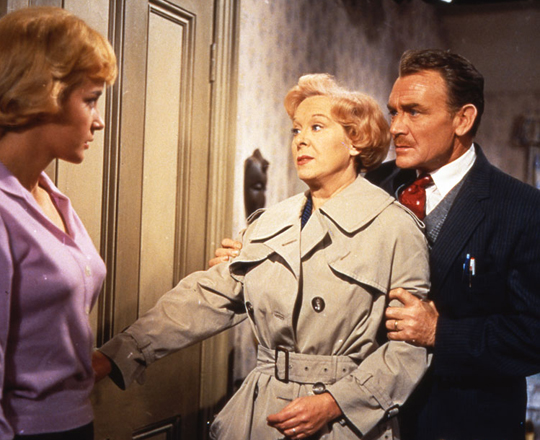 Kathie’s mother Nell (a terrific performance by Brenda De Banzie) harbours a lifelong resentment of her husband’s devotion to social justice outside the home while neglecting her and her needs inside, and her bitterness spills over in a vicious attack on her daughter and virulently racist slurs which drive Kathie from the home. Jacko is faced with a conflict between his socialist philosophy and his personal feelings, trying to argue rationally with Kathie and Peter about the impossibility of their relationship in a less than perfect society. It takes the eruption of a riot at the neighbourhood Guy Fawkes celebration to force Jacko to take a stand, and the film ends with some very tentative steps towards reconciliation within the family even as we see just how volatile the surrounding society is.

The gritty realism of the location filming and the refusal to simplify the issues for audience comfort give the film some real power.

I’ve been hooked on the BFI’s eclectic Flipside line of DVDs since they released Richard Lester’s The Bed-Sitting Room in 2009. Possibly the most inexplicable title yet is exploitation director Norman J. Warren’s first feature, Her Private Hell. Shot for peanuts in less than two weeks, it has no pretensions toward any kind of realism. Although there may be some historical value in what is presented as Britain’s first “narrative sex film”, the weak script and often confusing direction make it an unsatisfactory viewing experience. 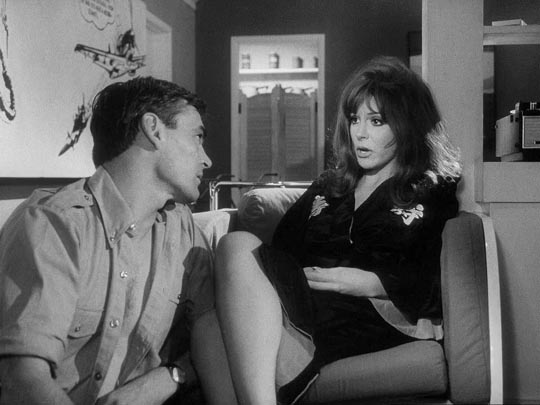 A young woman named Marisa (Lucia Modugno) arrives in London from the Continent to sign a modelling contract, but there’s something shady about her new employers. Neville (Robert Crewdson), the boss, comes on like a gangster caricature; his assistant Margaret (Pearl Catlin) eyes Marisa with what looks like more than professional interest; and photographer Bernie (Terence Skelton) hustles the model away to a remote, run down house where she’s kept virtually as a prisoner. Pictures are taken, but Marisa never sees any money. Photographer’s assistant Matt (Daniel Oliver) warns her not to trust the others, but manages to get her to pose in the nude for him. 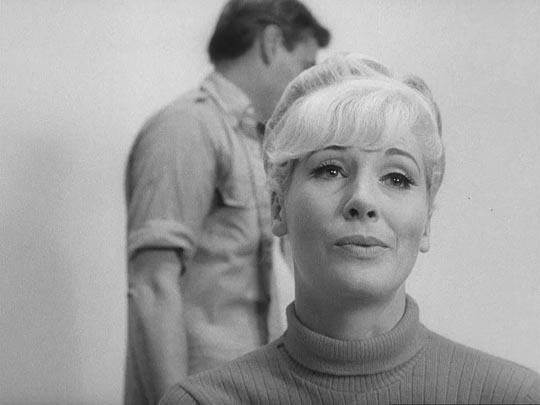 The film is so coy about the porn business, and so careful to avoid showing any nudity except for a couple of bare breasts, that you simply have to assume what the nature of the threat to the implausibly naive Marisa is; because Neville and the rest keep her in the dark about their plans to exploit her, it’s difficult to see how they’ll ever actually make any money off her. It’s even harder to understand why the film played for months in London when it was released because it offers little in the way of titillation for the raincoat crowd, and by 1968 there was more nudity turning up in European films which were getting more lenient treatment from the censors.

Apart from a few sequences in which Warren manages some expressive camerawork (in the opening at London Airport; when Marisa explores the derelict mansion she’s imprisoned in), the film remains obtuse and dull. Although Warren had directed a couple of visually interesting shorts before being given this “break” (both included on the Flipside disk), he eventually went on to make dull, impersonal horror movies like Terror (1978), Prey (1978) and Inseminoid (1981). 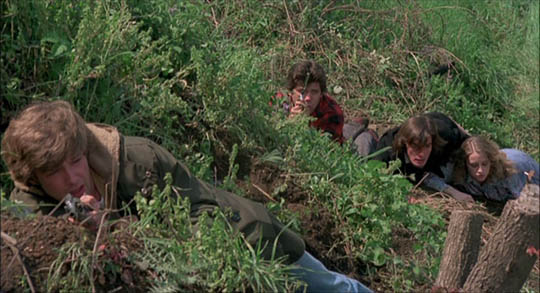 The Italians were masters of exploitation in the ’70s. While westerns and horror films often found a market outside the country, many of the thrillers known as poliziotteschi are only now coming to light in versions accessible to English speakers. These films are often harsh, nihilistic, and implicitly critical of the politically troubled society that they emerged from. The work of directors like Sergio Martino, Umberto Lenzi and the recently “rediscovered” Fernando Di Leo have few parallels in British and American film – perhaps Dirty Harry (1971), Death Wish (1974) and Get Carter (1971) come closest to capturing the sheer nastiness of the Italian genre’s worldview.

The prolific Di Leo not only directed, but also wrote many scripts for other directors; 1976’s Young, Violent, Dangerous (just released on DVD by RaroVideo as a follow-up to their four-disk Di Leo Italian Crime Collection) is an excellent example of his work. The Italian title Liberi Armati Pericolosi is more accurately translated as Free, Armed, Dangerous, but either way it’s descriptive of this story of three young middle class guys who go on a violent crime spree for no apparent reason. The film offers no particular rationale other than boredom, a reflexive lashing out at a society they don’t feel part of. They try to rob a gas station and end up killing a bunch of cops; they attempt to rob a supermarket and kill some more. The film takes place over a short time period, with the three friends trying to get out of Milan after the police shut the city down in an attempt to stop them. Although the police often come off no better than the criminals in these movies, Tomas Milian is sympathetic as the commissioner trying to bring the killers in, but even this decent man is helpless against such nihilistic violence.