The good and the bad of Warner Brothers

There has been a lot to admire about Warner Brothers since the advent of DVD in the late ’90s. The company was one of the first to really take advantage of the format’s possibilities, enhancing releases with commentary tracks, documentaries and other supplementary materials (shorts, newsreels, etc). They also put a great deal of effort into older “catalogue” titles, often packaging multiple movies into box sets which enhanced individual titles by providing a broader context. And when disk sales plateaued a few years back, the company pioneered the burn-on-demand model which allowed them to make available a lot of movies which probably wouldn’t have been economically viable as standard releases. Warners still gets a lot of things right, but some recent releases have not been as satisfying as we might have hoped (and don’t get me started again on their bizarre corporate animosity towards Ken Russell’s masterpiece, The Devils).

Speaking of Ken Russell, I just got around to revisiting Altered States (1980) via Warners’ two year old Blu-ray. I admit that I have a soft spot for this movie because it came towards the end of Russell’s glory days, before his work began to look more ragged (Lair of the White Worm, Gothic, Salome’s Last Dance). But also because Paddy Chayefsky’s sole venture into novel writing is essentially an updated version of Jack Arnold’s Monster On the Campus (1958), in which a university researcher is contaminated with the irradiated blood of a prehistoric Coelacanth and reverts to a savage hominid. While Chayefsky dressed the story up with some lofty philosophizing about religion and man’s place in the cosmos, the story is more than just similar. It’s a cheesy B-movie delight given a very polished treatment by Russell, cinematographer Jordan Cronenweth (Blade Runner) and a fine cast headed by an earnest young William Hurt, Blair Brown, Bob Balaban and Charles Haid.

Chayefsky was very unhappy with the way Russell treated his work (signing the screenplay with a pseudonym), partly because Russell embellished the hallucinatory montages with his own Catholic-inflected imagery, but more because Russell buried much of the overwrought “philosophy” by having his actors speak really fast and talk over each other’s lines; this gives us the gist of what they’re saying without giving us time to dwell on the “deep” meanings. Russell’s approach shifts the emphasis of the story to the relationship between Hurt’s Eddie Jessup and Blair’s Emily … it becomes a love story between a man driven almost mad by his doubts about the meaning of life and the woman who feels that their emotional connection embodies that meaning. Jessup has to come face to face with the bleak cosmic abyss before he realizes what she’s known all along. There are a lot of similarities between Russell’s movie and David Cronenberg’s The Fly, made six years later, but not surprisingly Cronenberg’s film ends in nightmare while Russell’s reaches a note of hope and redemption.

Warners Blu-ray looks very good, with a strong, colourful transfer that serves the complex opticals well; it looks way better than previous DVD editions. But there are no extras, though a commentary track from Russell would have been welcome, as would an effects expert talking about the achievement of those pre-computer visuals. This bare bones treatment is also what disappoints about a pair of recent Blu-ray releases from Warners of two of the best movies of the ’70s.

Mike Hodges’ first feature, Get Carter (1971), was attacked at the time of its release (particularly in England) for being a nasty, sadistic piece of work. It is that. But it’s also a bleak and savage look at England at the tail end of the trendy ’60s, a time of industrial decline in the North; there’s an air of desperation driving the petty criminals and their more “respectable” bosses. Michael Caine was an established star by the time he played Carter, with a solid body of work in comedies, dramas and thrillers, but even as his anti-Bond agent Harry Palmer, he was known as a more or less heroic character. The likeable actor seemed shocking as the relentlessly brutal gangster who returns North from London to find out why his brother died. Written off as an accident, to Carter the death looks like murder and he digs his way through the layers of the local underworld. Beating men and women alike and casually killing a few people along the way, he uncovers a sordid porn industry which involves pretty much everyone he meets and which was directly connected to his brother’s death. Despite orders from his own bosses in London, the family connection keeps him going and he destroys the entire well-connected vice ring.

Get Carter was significant in a number of ways, not least its bleak shot-on-location portrait of a side of England largely invisible during the previous decade (brilliantly photographed by Wolfgang Suschitzky). It also paved the way for other filmmakers to use genre stories to illuminate aspects of British life and politics. John Mackenzie’s brilliant The Long Good Friday (1980) is a direct descendant of Hodges’ film, with the late, sorely lamented Bob Hoskins playing a more complex and nuanced figure straddling the underworld and a corrupt establishment. Given the position of Get Carter in British cinema, it could easily support a thoughtful documentary about its making and the society it came out of and influenced – but Warners offers only the 14-year-old commentary track from the original DVD release (with Caine, Hodges and cinematographer Suschitzky).

Warners’ biggest recent missed opportunity, however, is their Blu-ray release of William Friedkin’s Sorcerer (1977). The director’s finest film by far has had a rather sorry history; poorly received on its original release, its previous appearances on home video have been lacklustre pan-and-scan transfers which did a great disservice to the superb photography by Dick Bush and John M. Stephens. The film’s relative failure at the box office had a number of causes, one of the most important being the fact that the fairly high budget had been split between two studios (a rarity at the time), with the result that it fell between the marketing cracks as neither Universal nor Paramount seemed to want to take responsibility for it. Another big reason, though, was an odd miscalculation on Friedkin’s part: that title attached to the director’s first film since The Exorcist led a lot of people to expect a similar horror movie, not a gripping existential adventure. (The title derives directly from the name painted on one of the trucks, but ancient tribal imagery scattered through the film indicates a more primal link to the implacable forces of fate which envelope the characters’ lives.) Poor advertising plus mistaken expectations gave the film an undeserved reputation as a misfire (even J. Hoberman in his review of the Blu-ray for the New York Times seems somewhat dismissive of the movie as an act of directorial madness).

Based on the same Georges Arnaud novel as Henri-Georges Clouzot’s Wages of Fear (1953), with a script by Walon Green (The Wild Bunch), Sorcerer is one of the most visceral movies ever made, with a remarkable, intense feel for the details of place, the sights, sounds, even smells it seems, of a world defined by contingency and human weakness[1]. Unlike Clouzot’s film – which exists solely within the South American hell-hole where its hopeless characters are trapped with no way out other than taking on the suicidal job of driving nitroglycerine over harsh mountain roads to the site of an oil well fire – Sorcerer takes its time to establish each of its characters in the worlds they come from – a young Palestinian (Amidou) running from Israeli forces after planting a bomb; a wealthy French businessman (Bruno Cremer) facing criminal charges for shady dealings; a nameless hitman (Francisco Rabal) who may or may not have been sent to kill a smalltime New York hood (Roy Scheider) on the run from a powerful gangster after making the mistake of robbing the gangster’s own church. 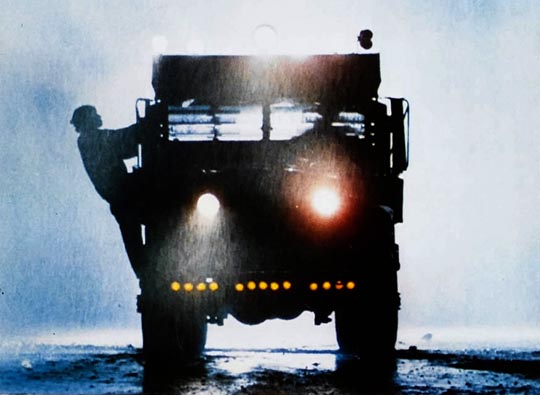 With each man given a reason to escape from his own world, the film cuts to an impoverished South American country where the locals are kept in line by the military in order to facilitate their exploitation by an American oil company. When a remote well blows up, the only way to put out the fire is to get crates of unstable dynamite two hundred miles through the jungle and over the mountains. The second half of Sorcerer details this grueling journey. Although the film’s impact is inevitably diminished on a small screen, it remains one of the most physical movies ever made and the good news is that Warners’ restored hi-def transfer is visually spectacular. This is one of the best recoveries of an almost lost film in quite a while; colours are rich and deep, the image so detailed that you can virtually feel every texture.

This in itself is great news; but surely a film like this deserves a treatment which would go so much further in restoring it to its rightful place as one of the masterpieces of the ’70s. Certainly, William Friedkin is still around and has shown himself more than willing to participate in commentaries and documentaries (not just about his own work, either; he’s contributed interesting commentaries to other filmmakers’ work – his track on Val Lewton and Jacques Tourneur’s The Leopard Man adds a great deal to that movie – and he gives an enthusiastic appreciation of Richard Fleischer on Eureka’s recent region B Blu-ray of Violent Saturday [1955]). But Warners offers just the movie. Not even a trailer. I’m grateful for the quality of the restoration, but this disk seems like a badly fumbled, missed opportunity. On top of which, against the director’s wishes, the company has inexplicably re-released the crappy pan-and-scanned DVD at the same time (Friedkin has a comment on Amazon warning people to avoid it). How is it that a company which has shown itself to be so aware of the value of the movies in its care is also capable of such thoughtless omissions? Baffles me …

_________________________________________________________________
(1.) While I’m a great admirer of Clouzot’s film, the ending never fails to irritate me as Yves Montand, feeling so ecstatic about his survival, starts driving like an idiot on a dangerous road, swinging the steering wheel from side to side in what is supposed to be an expression of joyful abandon – until he plunges the truck into a ravine and pointlessly dies. The revision of this ending in Sorcerer is far more effective: somewhat humbled by his survival, Roy Scheider’s character is grateful for the second chance he’s earned – at which point the consequences of his original crime catch up with him, yet another manifestation of the implacable fate which relegates these men to a hopeless existential dead end. (return)

Disappointment of the week: Prometheus

Book Review: They Came From Within by Caelum Vatnsdal