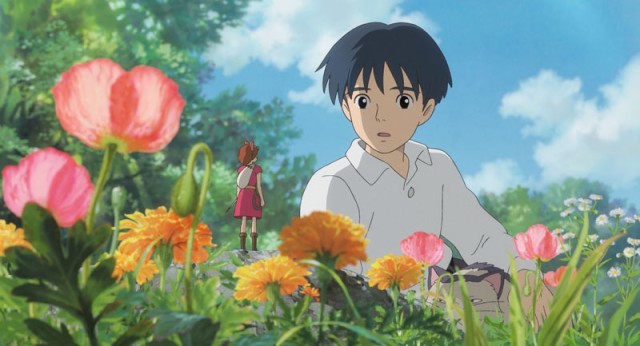 I went to see the new Studio Ghibli release a couple of weeks ago. The Secret World of Arrietty (2010) is based on the Borrowers books by Mary Norton, mostly written in the ’50s. These stories of little people who live in the walls and under the floorboards of houses, “borrowing” unwanted scraps from the human inhabitants, have been adapted a number of times before, both for television and the big screen, but interestingly all previous versions have been live action. As with Howl’s Moving Castle, the great Hayao Miyazaki, who scripted the new film, effortlessly transfers the English children’s fantasy to Japanese animation. 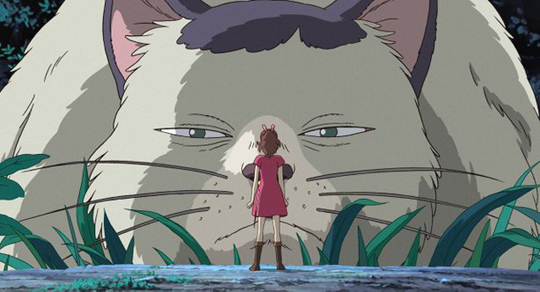 But I have to say I was a bit disappointed by Arrietty. As with Tales of Earthsea, the 2006 adaptation of Ursula LeGuin’s fantasy series which was directed by Miyazaki’s son Goro, Arrietty strains very hard to look like an authentic Hayao Miyazaki film – the designs, the beautifully rendered details of landscape and house, the sensitivity to nature and the wonders hidden just below the surfaces of things – but without the master in charge, there’s something missing. Director Hiromasa Yonebayashi’s characters lack the depth and nuance that distinguish Miyazaki’s work, and the narrative moves sluggishly, without any real sense of wonder or discovery. 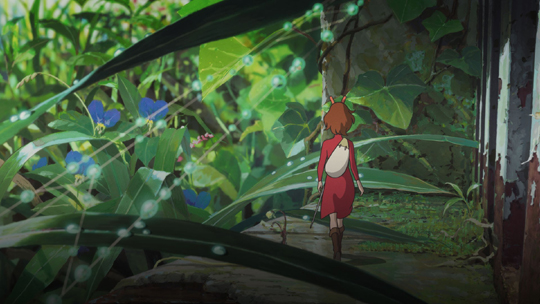 But having said that, I’ll reserve final judgement until the DVD comes out with the original Japanese soundtrack, because part of the problem may simply be the flat and uninteresting American voices dubbed over the Disney release.

None of my recent home viewing has been as family-friendly as The Secret World of Arrietty.

Mondo Candido was the final collaboration between Gualtiero Jacopetti and Franco Prosperi, the dynamic Italian pair who introduced the world to “mondo”. Although Addio zio Tom (1971) used dramatic techniques to “document” the history of slavery in America, this film was their only all-out fiction … at least in the sense that it was adapted from the satirical novel by Voltaire. This adaptation is very free, and eventually the film becomes a kind of catalogue of atrocities and depravity which bears a strong resemblance to the original Mondo Cane and its sequels.

Candido, the cheerfully naive young man who has grown up in the privileged precincts of a vast Westphalian estate, is kicked out into the harsh world when the Baron discovers the boy fooling around with his daughter, Cunegonde. Candido clings to his optimistic view of the world, learned from Doctor Pangloss who insists that everything that exists exists for a very good reason and therefore the world simply couldn’t be better than it is. But that optimism is sorely tested as the boy encounters war, cruelty, rape, murder … all the while clinging to his romantic memories of Cunegonde.

Jacopetti and Prosperi use all manner of anachronisms to point up the deficiencies of the human race, with 18th Century soldiers cut down by tanks, machine guns and flamethrowers. Candido’s travels eventually take him to modern New York, where materialism and commerce rule; Northern Ireland, where young children throw bombs at soldiers; and Israel, where beautiful female soldiers and handsome young fedayeen slaughter each other in a vibrantly colourful field of poppies.

Although Mondo Candido was a project Jacopetti pursued for a long time, the nature of the film doesn’t really draw on the directors’ strengths. The influence of Fellini and Pasolini (particularly the raucous Trilogy of Life) is apparent, but there are times when the loud, crowded scenes become grating rather than comic.

The real value of Camera Obscura’s lush Region 2 edition is the second disk containing almost three-and-a-half hours of interview-based supplements which cover the entire careers of the two directors, before, during and after their collaborations, and the making of Mondo Candido itself. This release is an excellent companion to Blue Underground’s now out-of-print box set containing all the other films by Jacopetti and Prosperi. 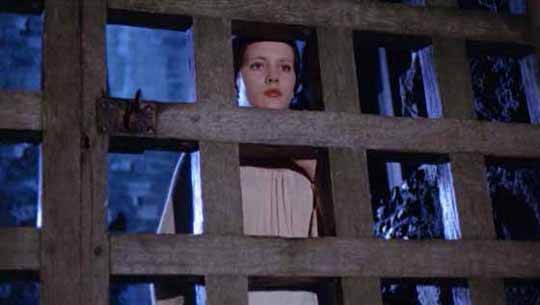 Continuing with “disreputable” European cinema, I’ve also watched the new Redemption/Kino Lorber Blu-ray editions of five of Jean Rollin’s films. Rollin for decades had a reputation for making soft-core vampire fantasies which were looked down on by critics and sought by fans of Euro horror. While it’s true that his films are infused with sex and death, and there are times when they seem somewhat deformed by gratuitous nudity and simulated sex, frequently imposed on them by demanding producers who not surprisingly wanted to recoup their investment in the exploitation marketplace, it’s also true that there’s a genuine aura of chaste innocence running through his work. 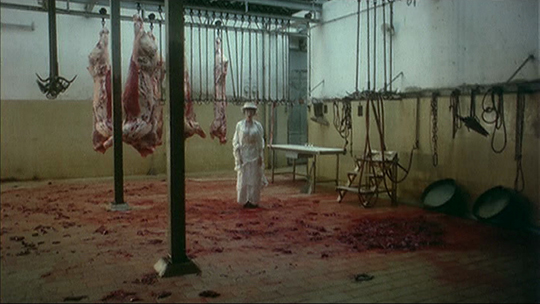 Despite his limitations – not simply the restrictions imposed by low budgets and very tight shooting schedules, but a certain clumsiness with the camera and an unwillingness to edit more tightly when a particular image took his fancy – despite these limitations, Rollin (who died just over a year ago, having continued to make films right to the end) was a genuine auteur. Although the prints sourced for the new editions are occasionally a little battered, the hi-def format reveals the richness of his visuals and confirms his auteurist strengths. 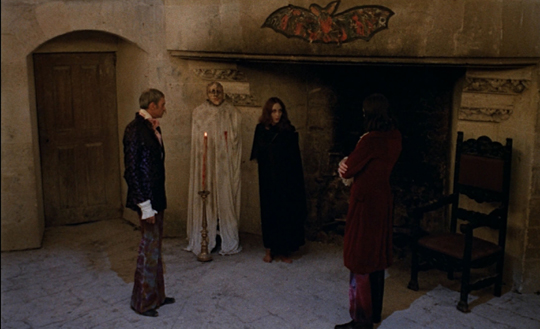 Despite the sexuality at play in the films, the overriding mood is one of melancholy. Rollin’s characters are almost always driven by a sense of loss and longing, clinging to the memory of some past, almost forgotten joy, drawn towards their deaths by a quest to regain what has been lost. Eros attempts to counter this melancholy, but being transient it inevitably serves only to amplify the sense of loss and longing it attempts to dispel … 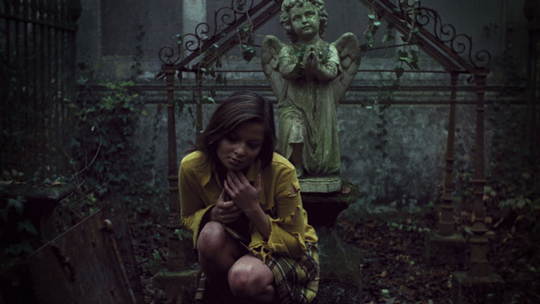 The five disks released so far represent some of Rollin’s best work: La vampire nue (1970), his second feature and the first in colour; Le frisson des vampires (1971), containing a strong comic element in the two cousins, former vampire hunters, now vampires themselves in all their bourgeois glory; La rose de fer (1973), often considered his most poetic work, and certainly the fullest expression of the inextricable relationship between Eros and Thanatos; Levres de sang (1975), which he himself considered the best of his scripts, certainly the clearest evocation of the power of memory to shape a life; and Fascination (1979), his great non-supernatural ode to blood fetishism. 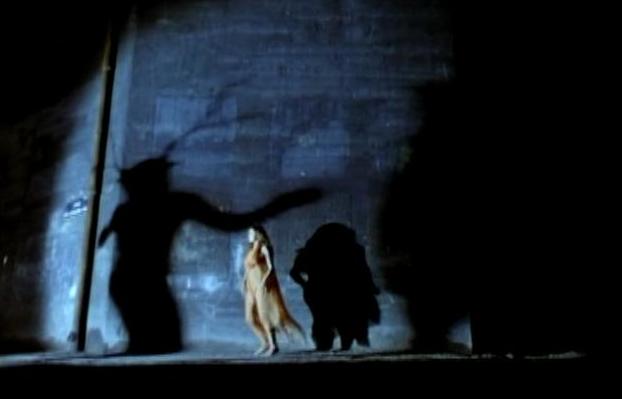 There are several brief interviews with collaborators included on the disks, but unfortunately they don’t carry over the supplements from Encore Films’ Region 2 special edition DVDs – commentary tracks with Rollin himself, deleted scenes, additional short films … Still, hopefully Kino Lorber will continue with other releases. Although Rollin is no longer around to appreciate the attention, it’s good to see him finally being taken seriously. 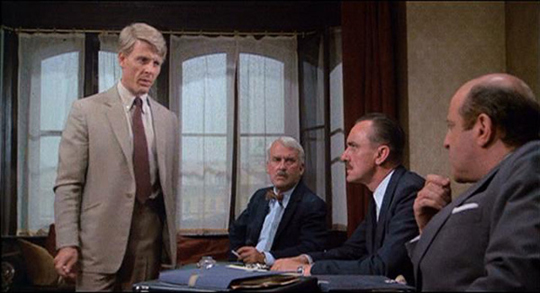 Fred Zinnemann’s adaptation of Frederick Forsyth’s bestseller is the polar opposite of the personal-obsession cinema of Rollin. It’s a finely tuned machine turned out by an industry. It was scripted by Kenneth Ross, who has a short list of credits which includes another Forsyth adaptation (Ronald Neame’s The Odessa File [1974]), two of John Frankenheimer’s lesser films (Black Sunday [1977] and The Fourth War [1990]), and Franco Zeffirelli’s cloying teen religious romance Brother Sun, Sister Moon (1972). Apart from the oddity of the Zeffirelli film, there’s nothing in this list to indicate anything more than a competent craftsman providing foundations for industrial product. 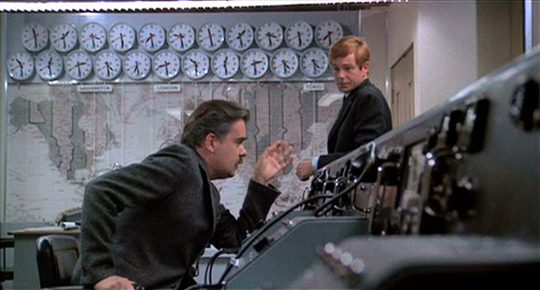 Zinnemann, of course, had a long and varied career spanning more than fifty years, starting with the wonderful Menschen am Sonntag (1930), a vibrant depiction of ordinary life in late Weimar Berlin, made in collaboration with Curt and Robert Siodmak and Edgar G. Ulmer. In Hollywood in the ’40s, he made a few B-movies, then several films dealing with the aftereffects of the war (The Search [1948], Act of Violence [1948] and The Men [1950]) before hitting it big with his somewhat overrated western High Noon (1952). From then on, he was a serious and respected mainstream filmmaker who could follow up the James Jones adaptation From Here to Eternity (1953) with the Technicolor musical Oklahoma!, and sandwich Jackal between the so-terribly-serious A Man For All Seasons (1966) and the prestigious, award-winning weepie Julia (1977), based on Lillian Hellman’s memoir.

My point is that there’s not a lot of individual personality in Zinnemann’s work, but at its best, it’s well-crafted studio product. The fact that after the break-up of the big studios, his projects became fewer and farther between suggests that, like many of the old studio directors, he wasn’t really suited to the tougher landscape of independent production. 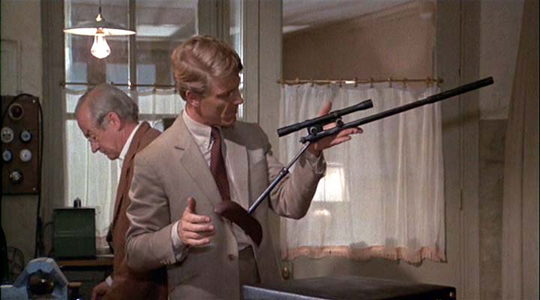 But having said that, his version of The Day of the Jackal holds up very well … not because of any deep meanings or insights into character and politics, but because it is a finely-tuned machine, a relentless depiction of procedures on the part of both the assassin and the authorities tracking him. In the ’60s, as France loses the war in Algeria, patriotic military men blame President De Gaulle. After a failed assassination attempt, they decide to hire an outside killer who can’t be traced by the police. And so the unnamed man, taking the codename Jackal (later appropriated by Ilich Ramírez Sánchez, the famous ’70s terrorist Carlos), sets about methodically planning the job – compiling various fake IDs, commissioning a specially designed weapon and ammunition.

One of the interesting things about the film now, made as it was in the pre-computer age, is the ways in which the small traces his activities leave gradually accumulate and become visible to the dogged police inspector assigned to find him (Michael Lonsdale, wonderful as always). Before databases and the Internet, detection was an intuitive art rather than a matter of endlessly consulting screens which cough up required plot points at convenient moments. 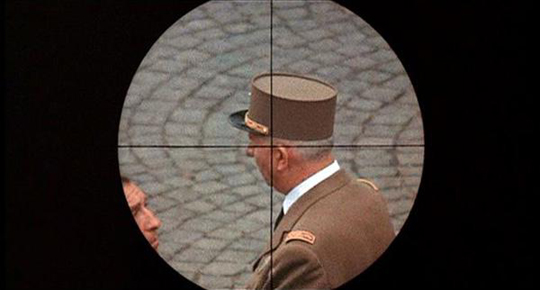 Because we never know anything about the Jackal (ably played with cool determination by Edward Fox), other than his methodical professionalism, the crucial moment when he learns that the police know of his mission and yet he still decides to continue rather than abort remains psychologically opaque. We see that this film is not really about human beings, but rather a collection of game pieces being skillfully manipulated around a board. But in terms of the narrative machinery, it doesn’t really matter why he makes that decision … it’s simply necessary for the process to play out to the inevitable end. And on that score, The Day of the Jackal remains a satisfying entertainment.

One thought on “Recent Viewing”