I’ve been falling behind on my notes about what I’ve been watching, so I won’t be going into a lot of detail here, just making a few observations about some of the movies I saw in the past month.

Spanish director Alex De La Iglesia has a flamboyant style which infuses his work with surreal touches which can add interest to the material, and sometimes even overwhelm it. His recent The Last Circus (2010) starts off as a fascinating meditation on the madness of Franco’s Spain but by the end has gone totally off the rails, far from any recognizably real world. On the other hand, his previous feature, The Oxford Murders (2008), manages to stay rooted in something like the real world, while nonetheless infusing it with a disorienting strangeness.

American student Martin (Elijah Wood) arrives in Oxford, hoping to work on his PhD under the supervision of the brilliant mathematician Arthur Seldom (John Hurt). When this appears to be impossible, and after a humiliating public encounter with his idol, Martin decides to go back home. But then he finds himself caught up in a puzzling murder case, with circumstances throwing him into a prickly partnership with Seldom as they try to interpret the symbolic clues left by the killer before there are more deaths.

With an excellent cast, atmospheric photography by Kiko de la Rica, and a script which revels in its often over-ripe dialogue, The Oxford Murders is one of the most entertaining mysteries to come along in a while. Its premise that truth is unknowable is sustained to the end, when Martin, thinking that he has interpreted everything perfectly, discovers that he really didn’t understand anything at all, and further that he himself was deeply, unknowingly implicated in the crimes. 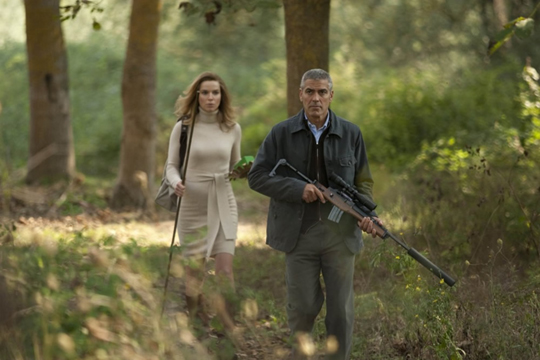 Anton Corbijn, in The American, his follow-up to Control (2007), his film about Joy Division, aims for something more spare than De La Iglesia’s dense mystery. This laconic story of a hired killer hiding out in a small Italian town, waiting to finish one final assignment before getting out of the business, tries for a stripped-down ’70s vibe. On the plus side, there are gorgeous locations, an attention to the minutiae of his work (constructing a specially designed assassin’s rifle), and a willingness to take the time for nothing to happen. But what ultimately makes the film fail to work is the presence of star (and producer) George Clooney. The actor, of course, is capable of summoning a great deal of charm on screen, but here he turns in a performance which is dour, inexpressive, and trapped in one energy-less note. It’s as if he decided that charm and a touch of humour would somehow violate the cool, paranoid tone of the film, but it’s a decision that sucks all the air out it. 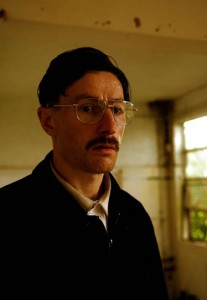 A more successful piece of narrative minimalism is Gerard Johnson’s strange and disturbing Tony, a few days in the life of one of the most uncomfortably socially inept characters ever to show up in a movie. Tony (Peter Ferdinando) lives alone in a grim London flat where he watches old action movies on VHS; he wanders the streets, awkwardly impinging on people’s personal space and trying to start banal conversations; he tries to resist pressure from a very unsympathetic bureaucrat to get a job. And being a rather creepy guy, he faces the hostility of some aggressive neighbours when a young boy disappears. The irony is that Tony has actually had nothing to do with the boy, but he is a serial killer. He invites a couple of drug dealing thugs back to the flat and dispatches them with a chilling lack of affect; he picks up a gay hustler and does the same. When the police come to hassle him about the missing boy, he explains that the foul smell in the flat is due to clogged drains.

So low key that it seems as if nothing much happens in the film, Tony nonetheless evokes such a rich sense of urban alienation, and the ways in which people living in close proximity may know absolutely nothing about one another, that it stands as a terrific example of urban horror. And Ferdinando, a TV and supporting actor, is brilliant in his first lead role. 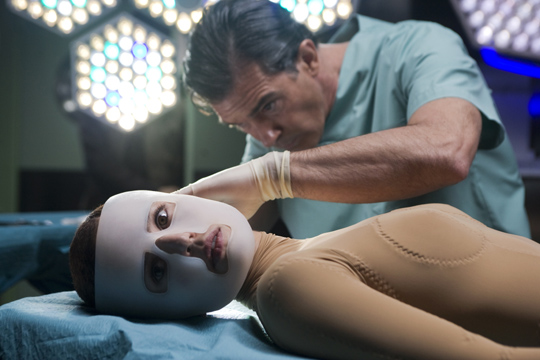 The essence of Pedro Almodovar’s cinema is the opposite of minimalism; his work is steeped in style and narrative complexity, full of colour, irony, satire and an overriding assertion of gender indeterminacy. His films envelop the viewer in their conceptual and emotional richness. So it seems a little odd that in tackling what is essentially a horror film (a genre which addresses the audience’s emotions more directly than most), in The Skin I Live In he has come up with one of his most detached films yet. The puzzle at the heart of the film plays out as an intellectual game rather than an emotional one. 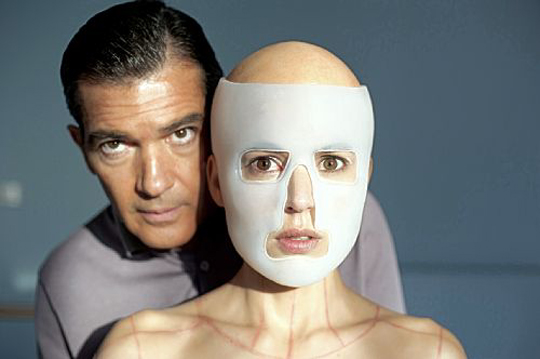 With a nod to Georges Franju’s classic Eyes Without a Face (1960), Almodovar tells the story of brilliant plastic surgeon Robert Ledgard (Antonio Banderas) who performs probably illegal experiments with genetically modified skin in his private laboratory; driven by the death of his wife several years ago in a fiery crash, he’s determined to come up with the perfect replacement for burn victims’ scars. But he also has a mystery patient kept locked in a room in his mansion, watched constantly over closed circuit TV. The identity of Vera Cruz (Elena Anaya) and Ledgard’s relationship with her is the mystery at the centre of the film, but we seem to get away from that focus when the narrative takes a long detour into flashback and the story of bored smalltown stud Vicente (Jan Cornet) and an incident involving Ledgard’s daughter Norma (Blanca Suarez), who was severely psychologically damaged by the death of her mother.

The various threads eventually come together in an unexpected way, bringing the film back to Almodovar’s favourite theme of the mutability of gender and identity, and the bloody finale makes narrative sense. But the story stubbornly remains an intellectual puzzle rather than a fully realized emotional experience. Needless to say, though, it’s visually ravishing and the performances are all excellent. 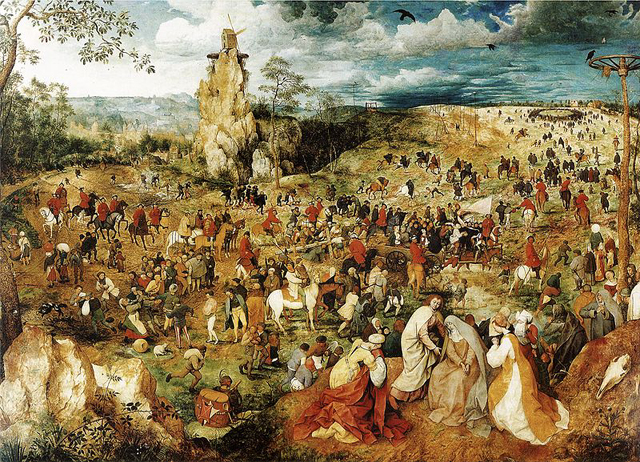 The most impressive film I’ve seen recently is Polish artist/filmmaker Lech Majewski’s fascinating meditation on art and history, The Mill & the Cross. While there are stylistic echoes of Miklos Jancso and Peter Greenaway, this is unlike anything I’ve seen before and is possibly the most creative and effective use yet made of CG technology. 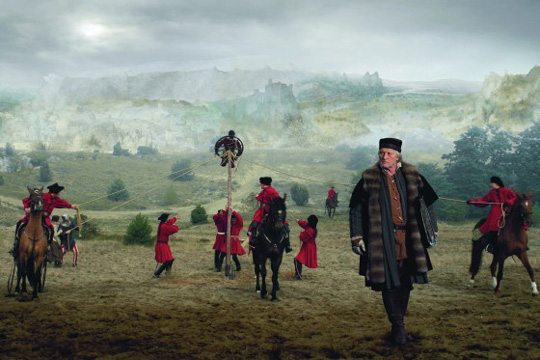 Majewski takes one of his favourite works of art, Pieter Breugel’s “The Way to Calvary” (1564), and brings the picture to life, complete with its complex manipulation of perspective and the combination of religious allegory (the Crucifixion) with contemporary Flemish events. The canvas is crowded with life and incident, with Christ going almost unnoticed in the midst of the carnival-like activity of peasants and burghers, and the oppressive Spanish occupiers standing in for the Romans inflicting torment on the population. 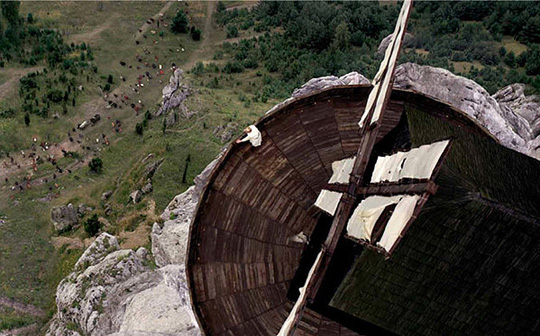 As Breugel (Rutger Hauer) observes the beauty and brutality around him, gradually drawing his observations together into a complex, symbolic painting, his patron Nicolaes Jonghelinck (Michael York) watches the violence and suffering from a more political perspective. But none of this can really convey what’s going on in the film, packed with the pleasure and pain of life and the incredible creative effort it takes to discover and convey a sense of order and meaning. Majewski’s images, faithful to his source, are exquisite, evoking the emotional and intellectual essence of great art by revealing its roots in the intersection between reality and imagination. 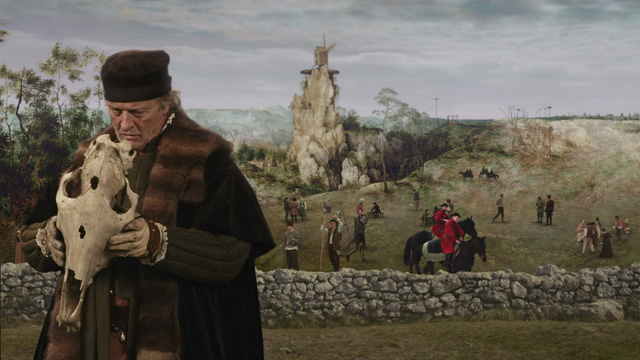 Kino Lorber’s Blu-ray of The Mill & the Cross is visually stunning, but I imagine that this is one film that really needs to be seen on a big screen to be fully appreciated.

Spectrum of Horror: from class to crass

DVD of the week: The Feathered Serpent