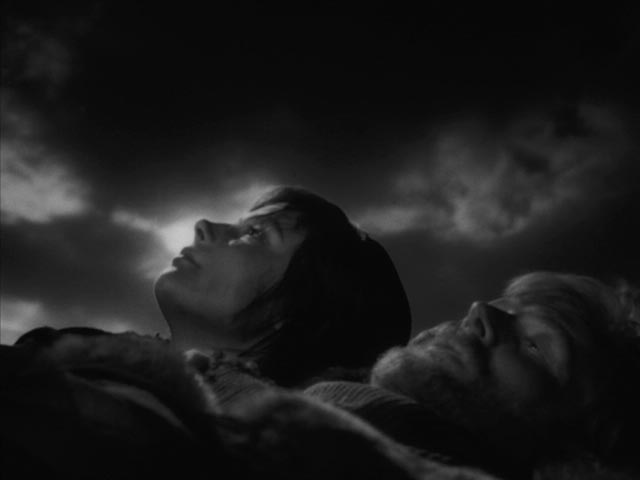 Mikhail Kalatozov, whose career began in his mid-20s with a number of documentaries, made some of the most interesting films to come out of Soviet Russia. Like most major filmmakers under the communist regimes of the ’30s through the ’60s, he had a rocky relationship with the authorities who controlled filmmaking, at one point even being barred from the industry for a number of years after his film Nail in the Boot (1931) was banned by the censors. 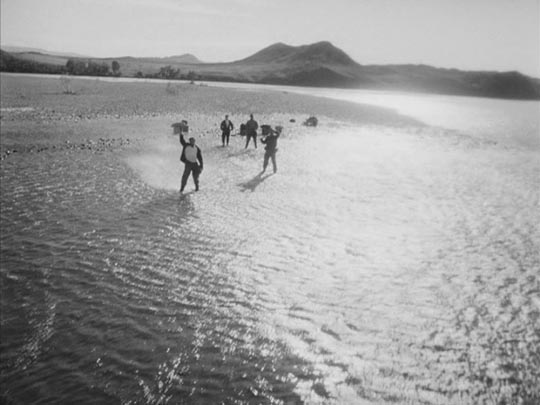 It seems that it was only after the death of Stalin and the general loosening of restraints in the mid-’50s that Kalatozov was able to experiment and express himself freely in film, and the results were a handful of movies which are so visually distinctive that he found himself condemned for “empty formalism”. His breakthrough came with The Cranes Are Flying (1957), a story of the impact of the Great Patriotic War on one family. This was the only Soviet film to win the Palme d’Or at Cannes, a recognition of the striking visual style Kalatozov had begun to develop with the cinematographer Sergei Urusevsky which they would expand in their subsequent films together, culminating in the idiosyncratic epic I Am Cuba (1964). This style is highly expressive, using aggressive camera movements, dynamic framing, and a surprisingly agile hand-held technique. 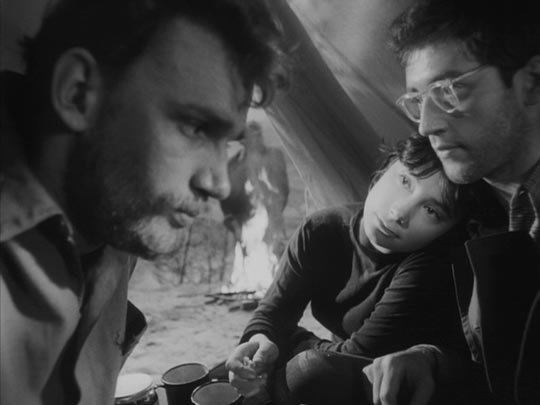 In The Cranes Are Flying, their technique powerfully evokes the emotional effects on ordinary Russians of the war against Germany, while in I Am Cuba it creates a monumental ode to the lives of ordinary Cubans and their struggle against oppression, leading to the triumphant revolution of 1959. At the time, that film was condemned for aestheticising the political struggle, but in retrospect, although some see the film as a monument of kitsch, it evokes a deep emotional involvement with the revolution and its causes.

Between these two masterpieces, Kalatozov and Urusevsky made one other film, Letter Never Sent (1959), just released by Criterion in an eye-popping edition. 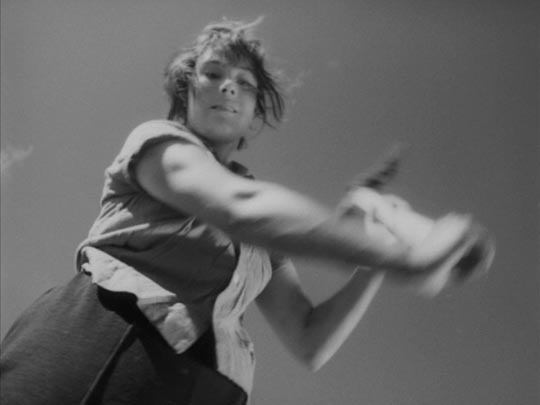 The story of the film is quite simple. Three geologists and a guide are dropped off in a remote part of Siberia to search for diamonds. They are presented as intrepid pioneers, seeking a way of freeing the Soviet Union from dependence on foreign sources of wealth. The expedition is led by Sabinin (Innokenti Smoktunovsky, whose career spanned 40 years and included Kozintsev’s Hamlet [1964]), and the film is partially narrated by him through an on-going diary he writes in the form of a letter to the wife he has left behind, a sacrifice to the needs of the nation. The other two geologists are Tanya (Tatyana Samoilova, the radiant star of The Cranes Are Flying) and her lover Andrei (Vasili Livanov), and their guide is Sergei (Yevgeny Urbansky).

As the summer passes and the group have no luck in striking the vein of diamonds which geologists have predicted should be there, the group engage in discussions of duty to the nation and the place of personal desire in a life devoted to the state. A barely expressed triangle forms, as Sergei, a loner, is attracted to Tanya. But there is very little in the way of personal drama in the film, and this of all Kalatozov and Urusevsky’s collaborations may justify those charges of empty formalism, because the visuals completely overwhelm the slender narrative. 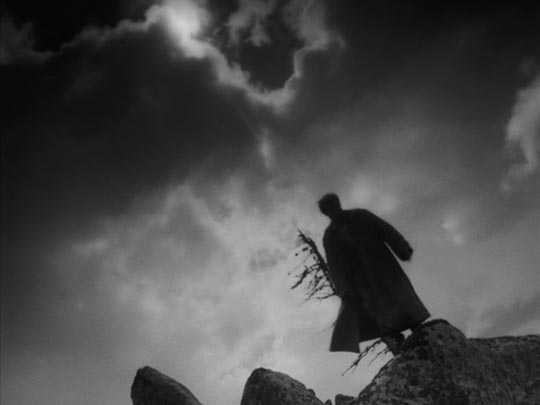 The film is so packed with extreme images that it often feels claustrophobic despite the wild landscapes in which it was shot. Kalatozov and Urusevsky choke the frame with extreme close-up compositions, huge faces looming towards the viewer. Early in the film, after the quartet have been set down on a riverbank, there’s an extended hand-held shot of them pushing their way through the dense undergrowth on the shore, an elaborately choreographed sequence which is disorienting, creating a sense of chaos rather than coherent purpose.

The scenes of Sabinin writing to his wife are all set beside campfires, and as his voice is heard flames engulf the screen. Through this fire, we see elaborate montages of the geologists’ work, digging, panning, full of shots which are reminiscent of the great silent films of Eisenstein, Dovzhenko and others, where the needs of state propaganda were often pushed aside by poetic visual expression. Objectively, this fire might be interpreted as passion, an expression of the energy the team are putting into the job; but one can’t help wondering whether this is really a vision of hell in which these individuals are trapped. 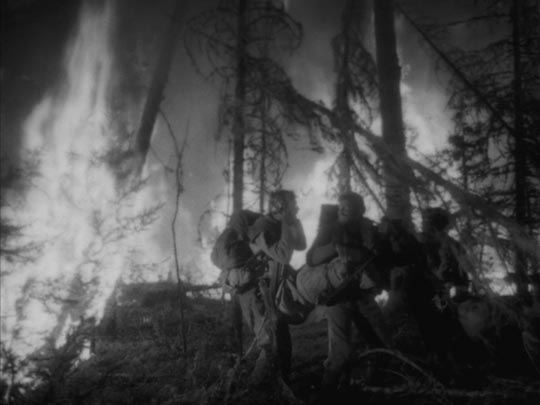 After the triumphant discovery of diamonds, there’s an exultant sequence which appears to have been shot (like much of I Am Cuba) on infrared film, giving the lush foliage of the taiga a gleaming white sheen, as if the landscape has been transformed into pure energy by the characters’ elation. But the next morning that joy is obliterated as they wake to a raging forest fire. This sequence, which goes on for a long time (we hear on the radio that the fire stretches for a thousand kilometres), is spectacular; the actors are shot amidst real flames, the burning trees stretching away into the distant background.

The arduous grind of their work is now replaced by a desperate struggle for survival. Sergei is the first to die, sacrificing himself to save their supplies. Cut off by broken radio, exhausted, the three geologists drag themselves through the now-deadly landscape, determined to bring the map of the diamond vein back to the authorities. Towards the end, Sabinin is alone, drifting down a fast-running, ice-clogged river. Barely alive, he has a vision of a grand industrial development on the shore which will subdue the nature which has defeated them as individuals … 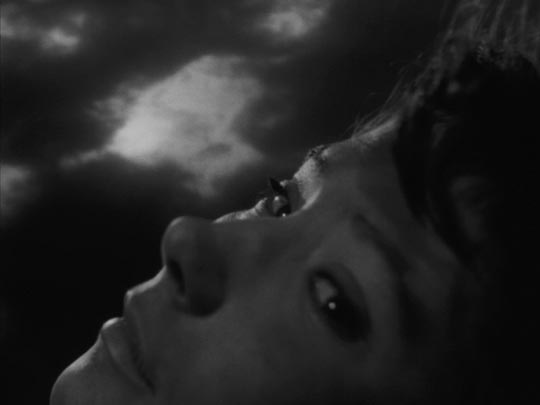 When the film was released, its apparent defeatism, the idea that even in peacetime a good citizen must suffer and die, displeased audiences, and the film was largely dismissed and forgotten, while The Cranes Are Flying and I Am Cuba have gathered increasingly impressive reputations. In some ways, Letter Never Sent almost seems like a satire on Soviet realism, on the sublimation of the individual to the larger social progress of the state, but the monumentalism of the imagery also seems to indicate a genuine heroism in the fate of the characters …

Letter Never Sent is a strange and somewhat confusing film, which is now largely notable for what we can see of Kalatozov and Urusevsky’s development of the visual strategies that would find their fullest expression in I Am Cuba. The influence of this creative team can be seen in the elaborately choreographed long takes of Andrei Tarkovsky, and certainly Tarkovsky’s first feature, Ivan’s Childhood (1962), owes more stylistically to Mikhail Kalatozov than it does to, say, Grigoriy Chukhray’s more orthodox realism in Ballad of a Soldier (1959). 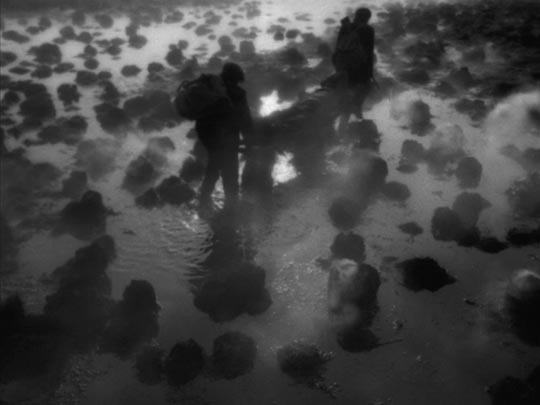 It’s also interesting to note that Kalatozov came from the capital of Georgia, Tiflis (Tblisi), the same town as Sergei Paradjanov, another filmmaker who sublimated narrative content to richly expressive visuals, but one who managed to avoid the trappings of state cinema.

Criterion’s edition of Letter Never Sent is a bare-bones disk with no extras, but the transfer is breathtaking, with the high contrast images showing a great deal of detail. The accompanying booklet has a useful essay on Kalatozov and the film by film scholar Dina Iordanova.