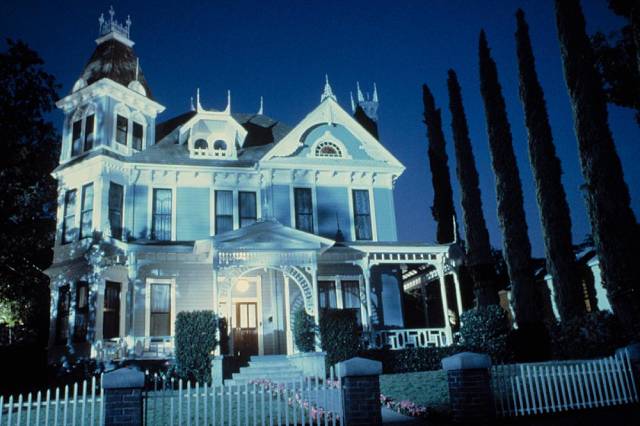 I’ve said it before – collecting is an addiction, and like any addiction it can trigger feelings of confusion and remorse, even as it continually promises the exhilaration of endorphin highs. With movies on disk, there are two separate components to the craving: the movies themselves and the physical object which constitutes the delivery system for them. Back in the prehistory of home video, that delivery system (tape) was purely functional … it changed the transitory nature of film-watching (in theatres, on television) into something over which the viewer now had some control. Over time, as technology developed, the carrier of the “signal” took on more importance – quality improved, the physical objects themselves became more appealing (shelves packed with slim disk cases began to offer the kind of comfort and reassurance that shelves full of books had always provided). Before the sheer weight of my collection began to feel like a burden with its reminder of just how finite my time here is, there was a seemingly unalloyed joy in being surrounded by the history of Cinema and my ability to dip into any period, any nationality, at any time I felt the urge. 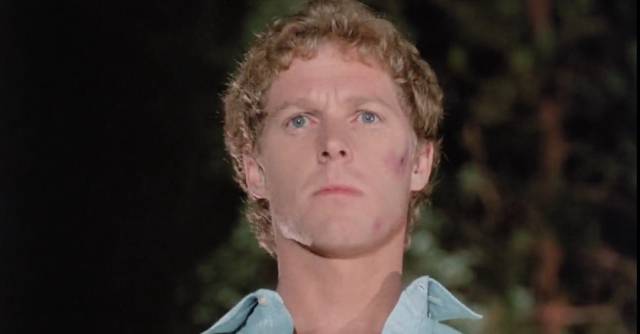 At some point during the two decades since the coming of DVD and, later, Blu-ray, possession of the objects seemed to take precedence over what those objects contained. (The same was once true of books, when I would buy stacks of them that I simply didn’t have the time to read – there are books on my shelves that I bought decades ago but never got around to reading.) That is of course something of an exaggeration and oversimplification; I still love the movies and take pleasure in my ability to experience such a range of art and entertainment without having to leave my apartment. But it does mean that I have a tendency to order way more stuff than I have time to watch … and to order things that, after they arrive, I have to ask myself what the heck I was thinking.

As a for instance, I recently ordered Arrow’s box set of House: The Collection, an extras-laden package of four movies produced by Sean S. Cunningham between 1985 and 1991. Reasons for ordering it: yet another impressively produced Arrow box set, on sale at a deep discount from Zavvi in England (came to ten bucks per disk compared to $100 for the set on Amazon); added to an order for several other sale items, it seemed an even more reasonable purchase. Reasons against buying it: I’d seen Steve Miner’s House during its original theatrical run in 1985 and really didn’t like it… 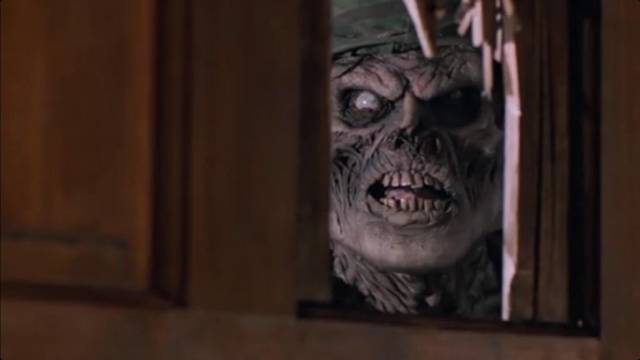 The fact that I had a low opinion of House should have put me off, and yet here it was, housed with three sequels and supplemented with commentaries and new and archival features, all at a (relatively) low price. Someone obviously thought it was pretty good and maybe after thirty-five years I’d be able to see something in it I’d missed the first time around.

But no, my first impression was correct. House is a mediocre movie obviously aimed at the audience which had made Tobe Hooper’s Poltergeist a hit just three years earlier. But it misses the target by a wide margin, primarily because it never gets the tone right. The horror elements are totally undermined by failed attempts at comedy. Horror-comedy is a tricky genre at the best of times, seldom scary and heavily dependent on the humour. Often, the horror leans on gross-out effects (Peter Jackson’s Bad Taste and Dead Alive) rather than scares; less often, a filmmaker may be able to weave something genuinely creepy into the comedy (the serial killer ghost in Peter Jackson’s The Frighteners). In House, there’s a fair amount of slapstick, but what sinks it is the failure to conceptualize just what the nature of the horror is.

The house is apparently a portal to other dimensions through which various random monsters impinge on this world – what they are and where they come from is never clear (not even a tossed in native burial ground to justify the phenomena). But somehow that portal leads back to the protagonist’s traumatic experiences in Vietnam, about which he’s trying to write a book … so maybe the house simply reaches into its residents’ subconscious to manifest their fears, though if that’s what it’s doing, what are the other random monsters?

To make matters worse, we’re offered the least convincing Vietnam flashbacks ever committed to film. Oh, and then there’s a secondary traumatic subplot involving the mysterious disappearance of the protagonist’s young son who vanished some time ago while he and his wife were staying in the house when it was owned by his aunt. The batty old woman asserted that the house itself had taken the kid, which ultimately proves to be the case … just more random plotting piled on top of everything else. Although all these elements are dragged together at the end – Vietnam nemesis defeated, kid rescued, marriage maybe saved – the jokey tone makes it all count for nothing. It’s just a weak display of ham-handed filmmaking offering neither emotional investment nor even rudimentary entertainment value. 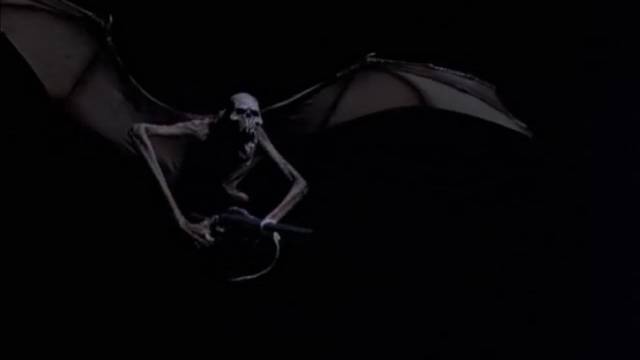 And who knows what this is and where it comes from?

That’s all probably unreasonably harsh because I’m annoyed at myself for buying the damn set and then wasting my time by watching a movie I already knew wasn’t any good. I’m a slave to my disk addiction and we always resent the things which have power over us, yet can’t deliver the high we crave. But I didn’t stop there – I went on to watch the rest of the set in some vague, absurd hope that maybe the sequels would be better.

Number two, The Second Story (1987), not surprisingly had the same tonal problems because it was written and directed by the original movie’s writer, Ethan Wiley. In fact, it piles on even more “comedy”, with a couple of decaying undead cowboys trying to get hold of a crystal skull stashed in the house, an object looted by them from an ancient Central American site several generations earlier. Although it has the power to keep its holder alive, it can’t stop them rotting, so really not much use. 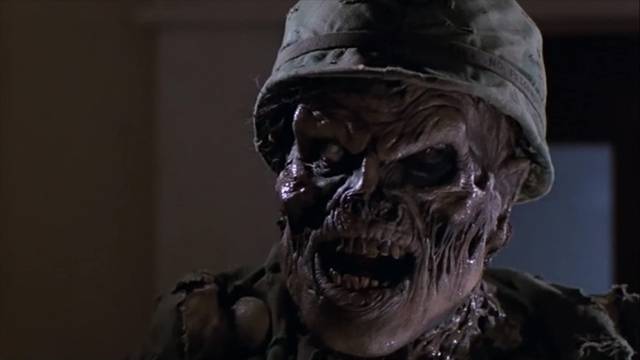 This time, the house offers a portal to a prehistoric world inhabited by an implausible body-builder caveman and various dinosaurs, including a cartoonish baby pterodactyl and a silly caterpillar-dog hybrid. As before, the comedy is pitched at a sub-Bill and Ted level. But did that stop me? Nope, I moved on to number three, which if nothing else confused me because it bears absolutely no relation to the first two movies either in tone or content. In fact, it appears to be just a random movie which Arrow has slapped the House tag on.

Even more confusing, it turned out to be a movie I’d actually watched six years ago without being aware of this phantom connection. Jim Isaac’s The Horror Show (1989) was apparently shot under the title House III, but released in the States under this other title (though it maintained the connection in other markets). It’s easy to see why the change was made; strictly from a marketing perspective, it avoided the potential of confusing (and disappointing) fans of the first two movies. 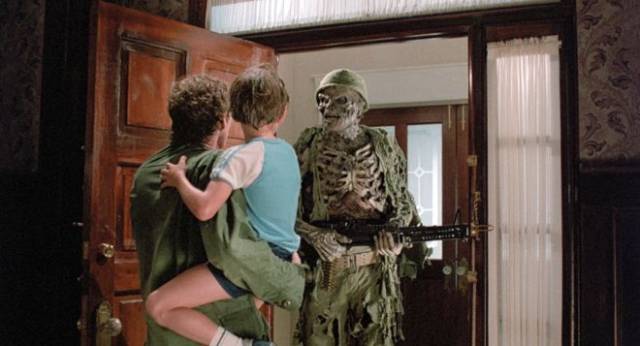 … but Cobb manages to rescue his son from the other realm

The most interesting thing about The Horror Show is its similarity to Wes Craven’s Shocker, released six months later. A vicious serial killer is executed in the electric chair, his spirit somehow getting into the grid to continue his gruesome work. Here, the monster goes after the cop who put him away, a guy already compromised by psychological problems caused by his work on the case. Naturally, everyone else believes the killer is dead so suspicion for the new killings falls on the cop whose behaviour makes him look crazy and dangerous.

When I saw the movie back in 2014, I thought it was pretty mediocre, but in this new context it came as something of a relief. At least it plays as straight horror, ditching the lame comedy. Generic in every sense, it does manage to do what it sets out to do with consistency and competence (apart from some continuity issues). Faint praise, perhaps, but it did offer a brief respite from the sinking feeling I got from the first two movies. 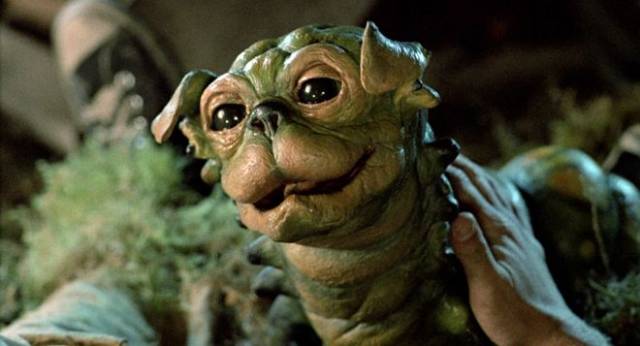 The prehistoric dog-pillar from Ethan Wiley’s House II: The Next Story (1987)

And so, somewhat braced, I moved on to House IV (Lewis Abernathy, 1991) – the packaging dubs this House IV: The Repossession, but on screen it can’t even muster the energy to add that subtitle. By this point, I felt like someone who has set off on a hike and run into bad weather; the path was turning to mud, but I just had to keep going if I wanted to make it home… In a situation like that you have two basic choices. You can bitch and complain and fight the circumstances, which wastes energy and takes more effort – or you can tell yourself that it’s actually invigorating and somehow in the end you’ll look back and consider that it was actually worth the effort. The latter is a lie you tell yourself in order to feel better, but even knowing it’s a lie maybe you do feel a bit better about getting yourself into a lousy situation. 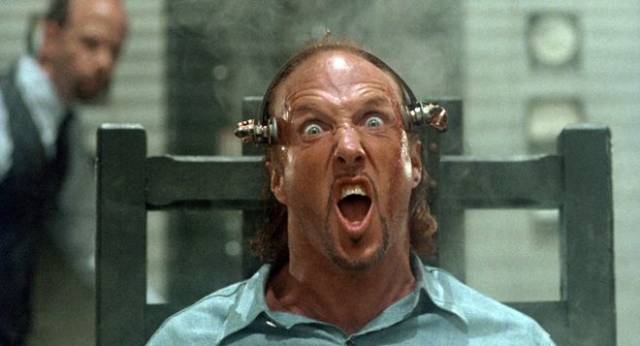 And so, at the start of House IV, while recognizing that it was a return to the original unsatisfying form of the first two movies, I thought it was a bit of an improvement. It was darker, the attempts at humour were more connected to the characters and situation rather than tossed in for the sake of being wacky. There was some genuine trauma for the characters to deal with; there was a creepy, obnoxious bad guy to root against; there was some ancient Native energy to fuel the house (complete with wise Indian elder to offer cryptic explanations) … there were even a couple of fairly engaging performances to encourage some emotional investment. 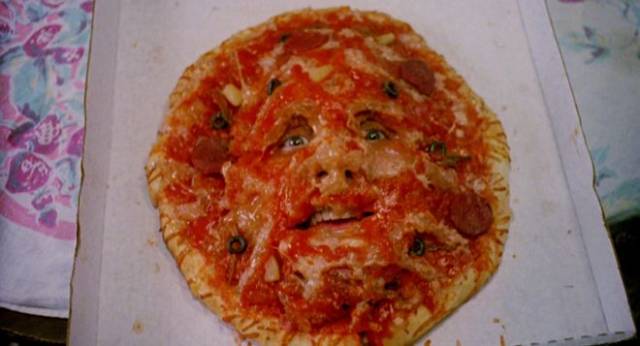 An aggressive pizza threatens the inhabitants of Lewis Abernathy’s House IV: The Repossession (1991)

But then the villains become cartoonish and “comic” – with the addition of some gross-out stuff which is gross in a really gross rather than funny way – and the ancient Native powers are pretty much forgotten about, setting aside much of the supernatural horror potential. The franchise finally limps to an end, leaving you to wonder how on earth this ended up being four movies … did any of them actually take in enough money to make it worthwhile?

And yet here I am, watching them all despite a near-constant sense of irritation. I shouldn’t be blaming Sean S. Cunningham and the various writers and directors, but rather my own lack of judgment and will power. Nobody forced me to buy the damn set and certainly nobody forced me to keep watching, even after I quickly realized that the first movie was as bad as I remembered. I tell myself that I must try harder in future, resist the temptation to buy something I know I shouldn’t waste my time on no matter how good a bargain it appears to be. But it’s not easy to fight a long-time addiction and I know only too well that I will be taking more pointless hikes like this…