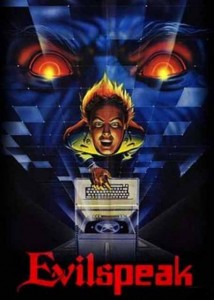 After a brief prologue in which a cult of Satanists is banished from Spain by the Inquisition, Evilspeak (Eric Weston, 1981) transports us to an American military academy where a much abused cadet (Clint Howard, younger brother of director Ron and former child star of TV’s Gentle Ben) discovers a large “hidden” room in the chapel basement (it’s unclear why no one else has ever found it as it’s very easy to get into) where he finds various magical paraphernalia and mystical books (which he quickly translates using what now seems a laughably primitive computer). So, we’re all set for a standard “worm turns” story as the cadet summons Satan to effect revenge on his tormentors. But unfortunately he loses the key book quite quickly and manages to fumble the incantation by failing to provide the final two ingredients (a consecrated wafer and human blood). So he continues to be tormented for almost an hour and a half until almost by accident his chief tormentor finally completes the incantation, at which point somewhat inexplicably, our abused cadet is possessed and in the five minute fiery finale, manages to slaughter everyone. While there is certainly some splatter here at the end, Evilspeak is mostly silly, innocuous and unsatisfactory as a piece of storytelling. And yet it is one of the 39 movies which ended up on Britain’s Director of Public Prosecutions’ final list of video nasties in the 1980s. 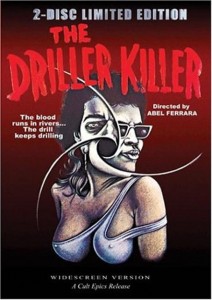 You have to wonder what it was about this minor, forgettable movie that was perceived as a threat? The fear that it would inspire the victims of bullies to summon Satan for revenge? … well, it’s quite obvious in the film that this is not really a viable option as the cadet ends up incurably insane. That someone might be inspired to unleash a pack of large pigs who might then attack and eat a woman while she’s taking a shower? … rather unlikely. Probably it was the quick glimpses of several beheadings and a couple of moments of pigs munching guts. But the question remains: in what way did this movie threaten to “corrupt the innocent”?

The argument with regard to movies like Abel Ferrera’s The Driller Killer or Dennis Donnelly’s The Toolbox Murders was that they would provide ideas for unstable people to commit copycat crimes – as if no one would think to use a hammer or a screwdriver or a power drill as a weapon if they hadn’t first seen it in a movie. But it’s less clear what the thinking was behind many of the other decisions to ban films. 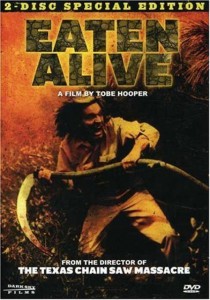 The peculiar, even random, mix of titles included on the DPP lists (both the final banned list and the supplementary “suspect” list: the complete, combined list of titles can be found here) during the British “video nasties” scare of the early 1980s indicate an almost total lack of critical experience on the part of the authorities who compiled them, absolutely no knowledge of film history, and apparently little awareness of how and why people watch movies in the first place. It was as if during Prohibition some prosecutor had walked into the local saloon and seized a half dozen brands of cheap liquor plus a couple of quality labels kept for more exclusive customers and declared that they alone would be forbidden, while dozens of other brands would be permitted. These lists really don’t make any sense. Why, for instance, do they include Tobe Hooper’s Death Trap/Eaten Alive and The Funhouse, but not his far better known and more notorious Texas Chainsaw Massacre? 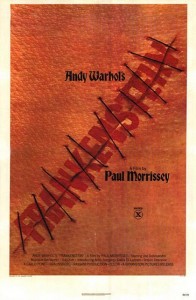 Having personally seen only 30 of the total 72 movies, I can’t vouch for all of them – but I can say that as far as I know, I haven’t become psychotic or even mildly antisocial because of them. They include a wide range in terms of quality and tone, from incompetent no-budget rubbish to ingenious no-budget creativity; from mainstream exploitation to high end art film. The only tenuous link among them is an apparent ability to cause offence to upright middle class sensibilities, as in “how dare anyone even think of being entertained by cannibal gut-munching and axe murders.” While some of these films can be seen as comedies (Andy Warhol’s Frankenstein, The Evil Dead, Twitch of the Death Nerve, Death Trap/Eaten Alive), even many of those which try to play it straight seem to appeal to an almost child-like desire to test one’s tolerance for looking at gross things. Watching some of these movies is a kind of endurance test, and making it to the end offers a confirmation that the viewer can indeed “take it”. This in itself sometimes provides the sole entertainment value of some of these titles, because in truth many of them (like Joe D’Amato’s Anthropophagous, Lawrence D. Foldes’ Don’t Go Near the Park) are not well made and are a genuine chore to sit through. 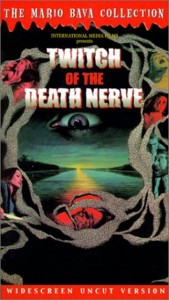 I can recall the first time I saw Peter Jackson’s Bad Taste (which no doubt would have been included on the list if someone had noticed it), watching a poor quality VHS copy with a friend, and the two of us being reduced to a state of absolutely helpless laughter by the escalating grossness, driven to a kind of exponentially increasing desire for the director to push things even further as each moment acclimatized us to the extremity of what we were seeing, demanding that Jackson continue to top himself – and perhaps feeling a bit of disappointment by the end because, of course, infinite escalation isn’t possible. But the point is, our reaction was based on a full awareness of Bad Taste as a movie, as a creative construct operating on certain terms which the filmmaker establishes at the start and then endeavours to remain faithful to until the end. Watching such films is a game that the viewer plays with the filmmaker, and if the filmmaker is a skillful enough player, the end result is viewer satisfaction; but if the filmmaker can’t keep his or her end of the bargain, there’s a sense of disappointment (such as I had long before Evilspeak limped to a conclusion). 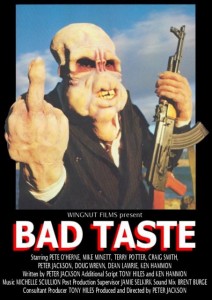 But again, the question is how does this process “corrupt”? The chief argument over the years has been the one about desensitization, and perhaps there is some truth in that. I’m sure that my tolerance for depictions of on-screen carnage is higher than that of someone who never watches these kind of films. But of course there is always a broad range of sensibilities in any human society … and in fact violence and spectacle has been a part of human entertainment forever – once used by those in power to manage the mob (Rome’s gladiatorial spectacles, mass guillotine executions during the French Revolution, public hangings in England until 1868), more recently looked down on as a matter of poor taste (though in England of course the very class that was appalled by the “nasties” was still indulging in its ritual blood sports like the fox hunt, which was the cherished province of the privileged while the “nasties” were largely enjoyed, it was believed, by the lower classes) … what seems clear is that this argument about desensitization has always existed, and that these aspects of human behaviour are pretty constant; only the media change and develop, with predictable eruptions of outrage at the appearance of each new venue for delivering this kind of entertainment. 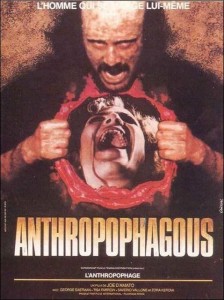 This is why it seems so clear that these outbreaks of “moral panic” are actually more about an apparent slipping of social control by those in power than they are actually about the danger posed by the books/comics/movies/rap music/videogames or whatever that are supposedly threatening to turn innocent people into mindless psychotics. A fact which the lists of video nasties appear to indicate. They seem more rooted in class issues, questions of “good taste”, than in any rational, quantifiable criteria. By and large, big budget studio productions were exempt, while more disreputable productions were targeted. How else to explain that while Alien was widely shown, Luigi Cozzi’s incompetent Alien rip-off Contamination found itself on the lists? Or Argento’s Tenebrae, but not Hitchcock’s Frenzy? 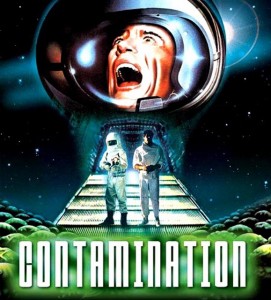 So we see things on the lists like Joe D’Amato’s unwatchable Anthropophagous, Andy Milligan’s no-budget The Ghastly Ones, Jess Franco’s Bloody Moon, James Bryan’s Don’t Go In the Woods, Charles McCrann’s Toxic Zombies, Jack Weis’s Mardi Gras Massacre … and so on. Movies whose chief offence really seems to be a disregard for good filmmaking, an affront to the standards middle class politicians, policemen, magistrates and judges hold their entertainment to. 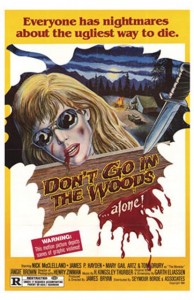 But perhaps that’s not entirely fair, because also on the lists are a number of movies which quite deliberately set out to disturb and cause offence, which in fact quite openly intend to challenge those middle class standards and the society they reflect.

Several of those will be the subject of my next post.

One thought on “Video Nasties, Part 2”

Edgar G. Ulmer, B-movies, and the art of the low budget