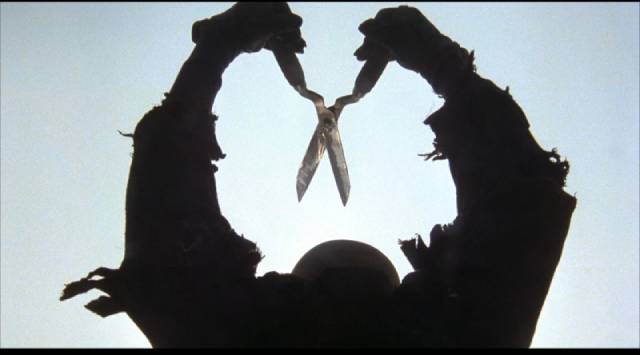 The killer strikes in Tony Maylam’s slasher The Burning (1980)

Recovery from my rotator cuff surgery back in June has been long and tedious, although I have enjoyed all the paid time off work. This extended medical vacation is now finally drawing to an end and one consequence of an impending return to work has been a kind of desperate increase in my disk watching – though for some reason, I never did get around to things I had specifically planned to watch: Arrow’s Jacques Rivette set, their edition of Kieslowski’s Decalogue, the BFI’s massive Alan Clarke at the BBC (which I’ve at least dipped into). I have no excuse for having devoted so many hours to trashy entertainment instead of art … maybe I just have to admit that I’m not a very serious cineaste after all.

My recent rush to consume has involved even more trash, peppered occasionally with something of higher quality. Partly under the influence of one of my work friends with whom I’ve maintained frequent contact specifically about genre and exploitation movies, I dived into a stack of ’80s slasher movies (mostly from Arrow). As genres go, this is one of the most generic, mired in simple formulas which could be executed on minimal budgets, often amateurish and predicated on a series of gory set-pieces involving the deaths of interchangeable (non)-actors. Though a reasonably talented filmmaker (often near the beginning of their career) might squeeze something original from the formula, most don’t. Watching them, particularly in bulk, is largely a quest for those nuggets of invention, though in the aftermath I do wonder why I bothered and what I actually expected. After all, I wasn’t a particular fan at the time, so watching them now is a strange form of displaced nostalgia. 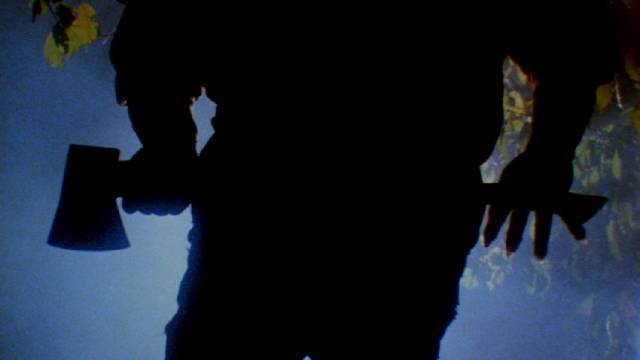 A killer stalks the woods in Joe Giannone’s Madman (1981)

Recent consumption includes Tony Maylam’s The Burning (1980) and Joe Giannone’s Madman (1981), both based on the urban legend about a hook-handed madman who killed children in Staten Island. Maylam’s movie is one of the more polished slashers, taking its time to develop rudimentary characters at a summer camp before turning on the blood. It’s most notable though for the first screen appearances of Fisher Stevens, Jason Alexander and Holly Hunter (who doesn’t even get a line of dialogue). Giannone’s movie (his sole credit) is structured as a campfire tale, in line with its story-to-scare-kids inspiration, and leans heavily on repetition and characters being dumb.

Using the return of the repressed idea Halloween was based on, Ovidio Assonitis’ Madhouse (1981), not to be confused with the 1974 Vincent Price-Peter Cushing movie, has evil twin Helen (Morgan Most), driven insane by a disfiguring disease, escape from hospital to torment her sister Julia (Patricia Mickey). People around Julia start to die gruesomely as her birthday approaches, leading to a finale reminiscent of J. Lee Thompson’s Happy Birthday to Me (also 1981), with the addition of a second mad killer. 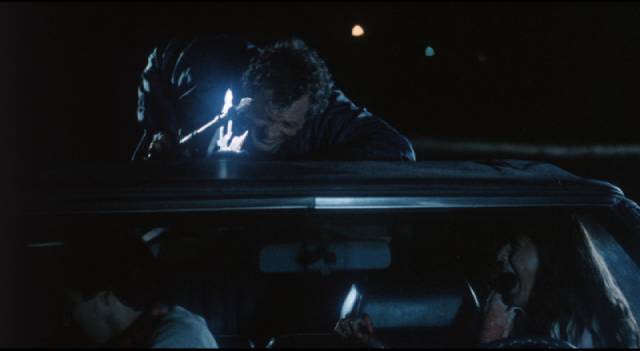 Buddy Cooper’s The Mutilator (1984) is one of the most generic slashers ever made. Four friends (two couples) head for the beachfront house belonging to the estranged father of one of the guys, where they party, walk on the beach, swim … and get killed one by one by dad, who seems to have no motivation other than that the movie needs someone to kill the kids. The main point of interest is the presence of Matt Mitler as the lead, though here he exhibits little of the screen presence he had in his next movie, Battle for the Lost Planet (1986). 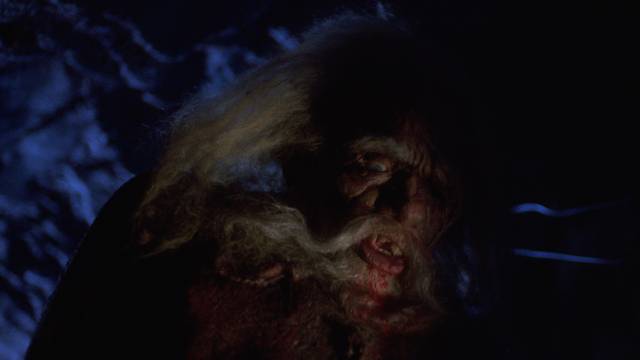 Considerably more atmospheric is Leszek Burzynski’s Trapped Alive (1988), which has a couple of friends stopped on a snowy road on New Year’s Eve by three escaped cons. If that wasn’t bad enough, they take a side road to avoid a police roadblock and end up plunging into an abandoned mine inhabited by a murderous cannibal trapped years ago by the cave in that closed it down. With echoes of Gary Sherman’s Death Line (aka Raw Meat, 1972) and George Mihalka’s My Bloody Valentine (1981), Burzynski makes good use of the limited, claustrophobic mine set, while “star” Cameron Mitchell, apparently hired for a day, frets at home about his overdue daughter. 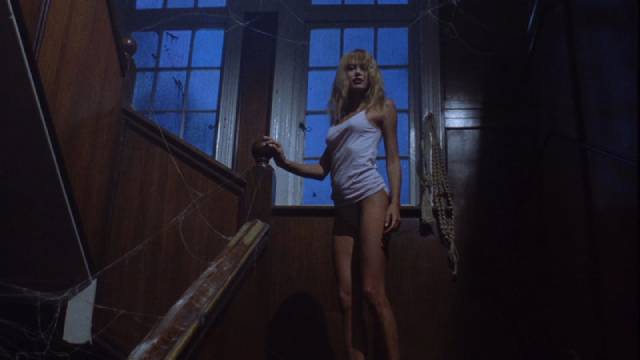 A seductive zombie lures unwary travellers to the doom in William A. Levey’s Hellgate (1989)

Hellgate (1989) adds a supernatural element (a crystal which can both kill and revive the dead) to a slasher with echoes of Tobe Hooper’s The Funhouse (1981). It’s set mostly in a fake ghost town tourist attraction run by Lucas Carlyle (Carel Trichardt), who hates everyone since his daughter was killed by bikers, a town which is populated by zombies who are the reanimated corpses of tourists he’s killed and revived. Yet another pair of vacationing couples get lured to the town and bumped off one by one. This one has an odd tone, partly because its rural American setting was actually shot in South Africa with a largely South African cast. And partly because it was directed by William A. Levey, who began his directing career with Blackenstein (1973), and in between made a family-friendly horse movie with Mickey Rooney and gave Patrick Swayze his showbiz start with Skatetown, U.S.A. (1979). Hellgate recaptures some of the distinctive flavour of those early-’70s regional horror movies that didn’t always make sense but rustled up an odd dreamlike ambience. 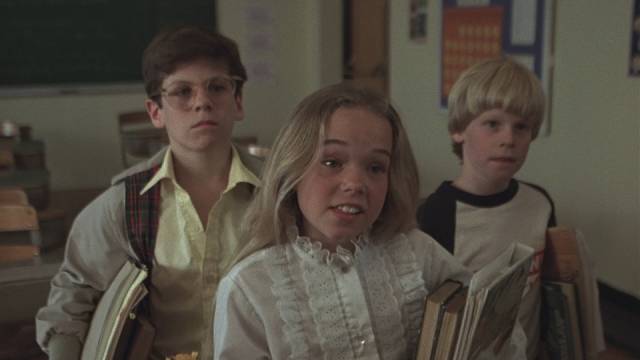 Ed Hunt’s Bloody Birthday (1980) is related to the slasher genre – there are a series of killings in a quiet suburb – but it fits more closely into the evil kids sub-genre, with a trio of ten-year-olds, all born at the same moment during a total eclipse, which somehow left them all soulless sociopaths. This is Hunt’s best movie, with the cheerfully murderous kids quite chilling as they manipulate the adults around them and rack up a body count in the days leading up to their birthday party. I have no idea what it says about me, but I’ve always preferred this particular genre to the basic slasher. Maybe seeing kids as creepy and alien has something to do with why I never had any of my own! 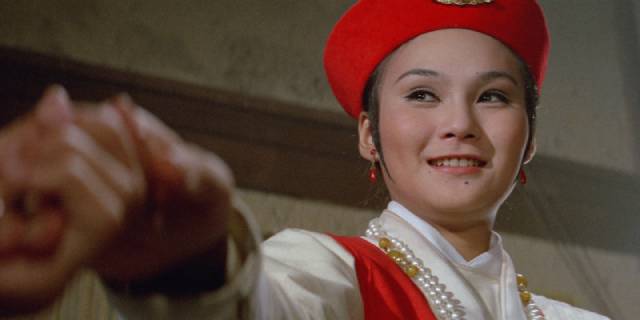 Hu Chin as Shui Mi-tao, a member of tavern staff with special skills in King Hu’s The Fate of Lee Khan (1973)

Seemingly by chance, a big chunk of my recent viewing consists of movies from the early to mid-’70s, the period when my movie watching got serious and I developed an appreciation of cinema and acquired rather eclectic tastes. A lot of these are movies I wouldn’t have had access to at the time, or simply didn’t go to see; while others are ones I did see and in some cases am now revisiting for the first time in decades. Back then, for instance, there simply wasn’t much distribution of Asian movies and I’m still catching up – most recently with the Female Prisoner Scorpion (1972-73) and early Seijun Suzuki sets from Arrow and King Hu’s The Fate of Lee Khan (1973) from Masters of Cinema.

Apart from arthouse films by the likes of Fellini, Antonioni and Petri and an occasional high-profile thriller by Argento, I didn’t see a lot of Italian movies back then either. In recent years, I’ve consumed Italian genre movies like a glutton – the Gothic horrors and gialli of Mario Bava, Antonio Margheriti, Fulci, Lenzi and others. Most recently, it’s been a grab-bag ranging from sleazy to art, from Luciano Ercoli’s first giallo The Forbidden Photos of a Lady Above Suspicion (1970); to Leopoldo Savona’s Byleth: The Demon of Incest (1972), a Gothic tale about a Duke with incestuous feelings for his recently married sister who summons the title demon, leading to murders in the neighbourhood; to Andrea Bianchi’s sleazily titled giallo Strip Nude for Your Killer (1975), set like Bava’s Blood and Black Lace in a fashion house; to Pasquale Squitieri’s more serious crime movie The Climber (also 1975); and in a different class altogether, Elio Petri’s Property is No Longer a Theft (1973) and Pier Paolo Pasolini’s pre-Modern Trilogy of Life (1971-74). 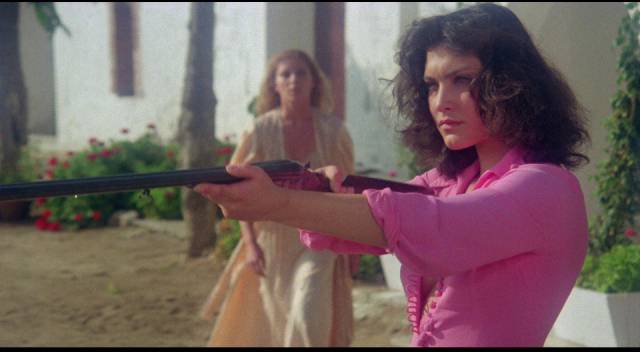 I’ve already commented here on most of the British films from this period that I recently watched – Albert Finney’s Charlie Bubbles (1968), Stephen Frears’ Gumshoe (1971), Malcolm Leigh’s Legend of the Witches (1970) and Derek Ford’s Secret Rites (1971), and Robin Hardy’s The Wicker Man (1973). Although it dates from slightly earlier, I also recently saw Carol Reed’s The Running Man (1963) for the first time. Reed was almost thirty years into his directing career when he made this thriller, with his best years behind him (ironically, he finally won an Oscar for the bloated, atypical musical Oliver! [1968]), and The Running Man is a pale shadow of his most famous film, The Third Man (1949), which had been his third masterpiece in a row, following Odd Man Out (1947) and The Fallen Idol (1948).

The Running Man, adapted by John Mortimer from a novel by Shelley Smith and set in colourful Spanish locations, seems to have the ingredients of a good thriller – a man and his wife on the run after faking his death for insurance money encounter an investigator who may or may not be onto their real identities – but somehow it never gels. Part of the problem is Laurence Harvey in the lead role; he obviously needed the director to rein him in as he completely overdoes his impersonation of a rich Australian sheep farmer as he hides out in Spain. With bleached blond hair and an outrageously unconvincing accent, he plays the husband as a total jerk for whom we never gain any sympathy. On the other hand Alan Bates is very good as the insurance man and Lee Remick was never lovelier than she is here as the wife who fights against the realization that her husband really is an arsehole.

According to extras on the Arrow Blu-ray, Reed had completely lost confidence the previous year when conflicts with Marlon Brando got him fired from Mutiny on the Bounty (Lewis Milestone, 1962). On location in Spain, he had difficulty making decisions, with any suggestions offered by cast and crew causing him to second guess himself. It’s sad to see when a great talent burns out like this.

Of the American movies from the same period, two I hadn’t seen since their theatrical release, two I had watched fairly recently but watched again because I’d just bought upgraded disks, and two I hadn’t seen in years and was a little nervous about the risk of disturbing positive memories by seeing them again.

But I’ll reserve those six for my next post.