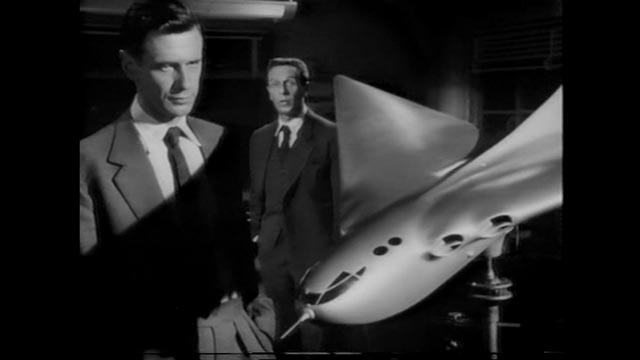 Michael Heathley (James Donald) has idealistic hopes for his experimental plane, the M-7, in Anthony Asquith’s The Net

Before I saw his first feature films from the late 1920s, I had formed an impression of Anthony Asquith’s work from his well-appointed adaptations of British theatre: George Bernard Shaw’s Pygmalion (1938, co-directed with Leslie Howard who plays Henry Higgins), Terence Rattigan’s The Winslow Boy (1948) and The Browning Version (1952), and Oscar Wilde’s The Importance of Being Earnest (1953). Asquith seemed an intelligent and respectful but not especially imaginative filmmaker, an impression suggested by the director’s personal background: he was the son of a Conservative Prime Minister and educated at Oxford’s Balliol College. Probe a bit more, however, and you discover that upon graduation young Asquith became one of the founding members of the Film Society where he absorbed the lessons of Russian montage and German Expressionism and proceeded to make a series of short nature films. 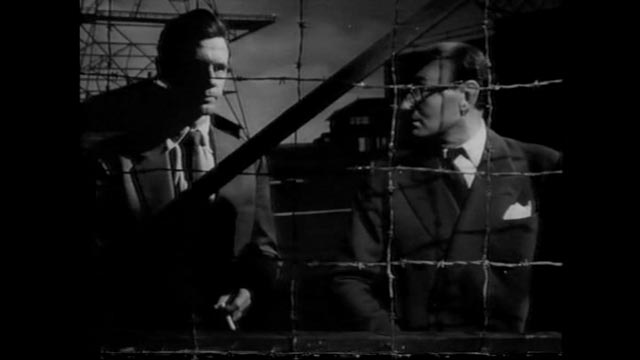 The early fiction features that initiate his career are, of course, a revelation: Shooting Stars (co-credited to V. Bramble, who was assigned to oversee the production) and Underground, both released in 1928, and A Cottage on Dartmoor (1930) show a facility of technique and an acute understanding of the human comedy that made Asquith as exciting a talent as his contemporaries Alfred Hitchcock and G. W. Pabst.

In accepting George Godwin’s invitation to contribute to his blog, I want to initiate an exploration of Asquith’s filmography for overlooked (and as yet unseen) films which might confirm or query the standard view of this filmmaker. 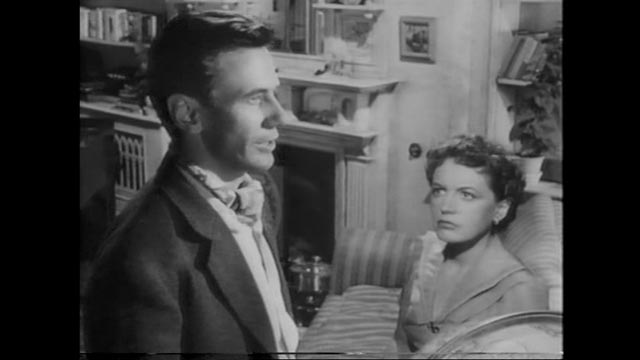 Heathley, immersed in his work, neglects his marriage to Lydia (Phyllis Calvert)

I’ll begin with one of Asquith’s lesser-known movies, The Net (1953), a Cold War drama about an international group of scientists assigned by the British government to build and test an experimental aircraft, the M-7, capable of speeds in excess of the sound barrier. (David Lean’s Breaking the Sound Barrier, which I wrote about earlier in this space, was successfully released the previous year and science fiction films were beginning a return to British cinema following the war.) It’s striking that William Fairchild’s script (from a novel by John Pudney) introduces marital and familial relations between the characters as much as it does scientific concerns, or perhaps it’s best to say, the personal and the professional intersect. 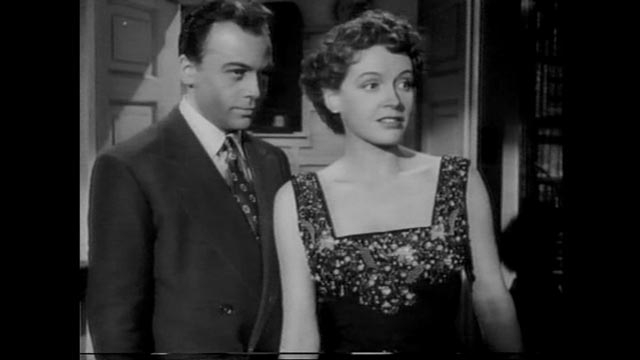 Early on it’s revealed that the idealistic leader of the group, Michael Heathley (James Donald), is a young man who takes his wife Lydia (Phyllis Calvert) for granted, a situation observed by Heathley’s colleague, Alex Leon (Herbert Lom), a German refugee from an Axis concentration camp who is attracted to Lydia. This marital tension is mirrored in a younger couple: Brian Johnson (Patric Doonan), a Scotsman and Heathley’s protégé whose concern for his bedridden father affects his courtship of Caroline Cartier (Muriel Pavlov), a young French researcher. The team also includes an Irish doctor, Dennis Bord (Noel Willman), a Canadian security officer Sam Seagram (Robert Beatty), a government liaison Sir Charles Craddock (Walter Fitzgerald) and the older, conservative head of the project, Professor Carrington (Maurice Denham), whose early demise raises the suspicion that there may be a traitor in the group. 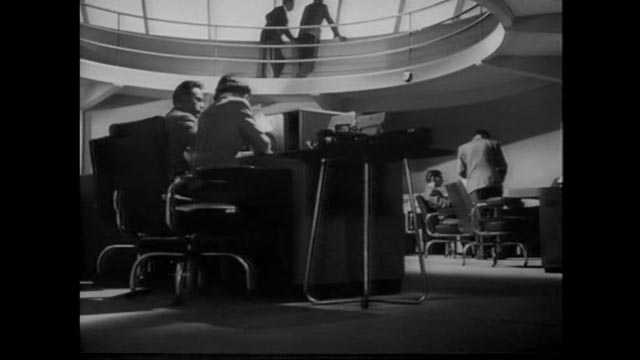 This cast of characters raises the prospect of a standard Cold War thriller consistent with American and Russian films of the period, but Asquith eschews a whodunit plot – the traitor’s identity is revealed early on – and commits to his interest in the psychological dimension of the setting and story. He does this by integrating the science-fiction elements through passages of striking mise-en-scene and selective episodes of montage reminiscent of Asquith’s late ’20s movies. 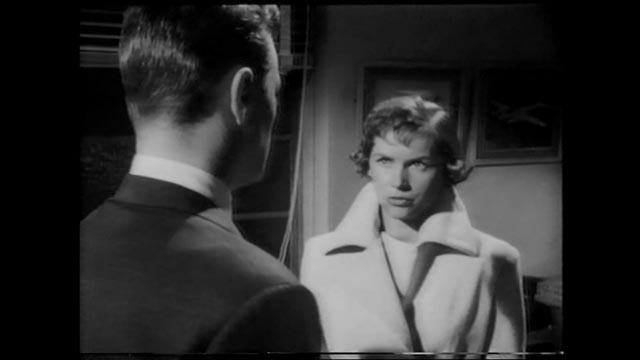 Like Breaking the Sound Barrier, The Net begins on the English south coast; here a silhouetted soldier patrols a military research installation where just a few years before, an anti-aircraft gun guarded the facility. Part way into the opening sequence, the camera tracks forward to introduce the discussion between Carrington and Heathley, the two men enclosed behind a wire grid fence extending to the four edges of the frame. In their conversation Heathley insists the M-7 is ready for a manned test but Carrington counters that ground control is safer at this stage of the project. The object of their argument meets their gaze in a long-shot: an angular metallic object – Carrington calls it “a new toy” – floating in the water off-shore like a piece of modernist sculpture. (A model of the aircraft, resembling a metallic bird suspended in flight, will dominate the frame in a working space within the installation or “camp” as it’s referred to by no less than three characters.) The film’s title could be a direct reference to Carrington’s preference for a safety net but as well, it’s suggestive of the isolation that the entire group is prone to. Asquith exploits both ideas. 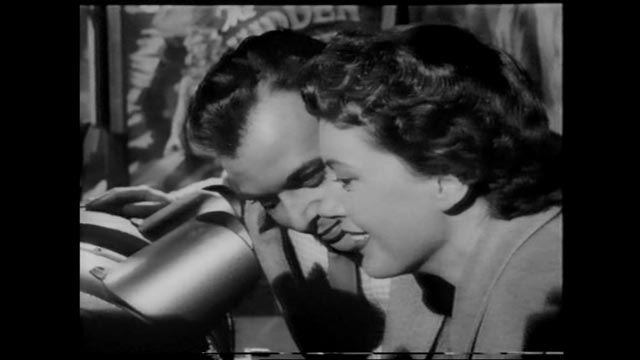 Asquith uses a tawdry fairground peepshow to spark and comment on … 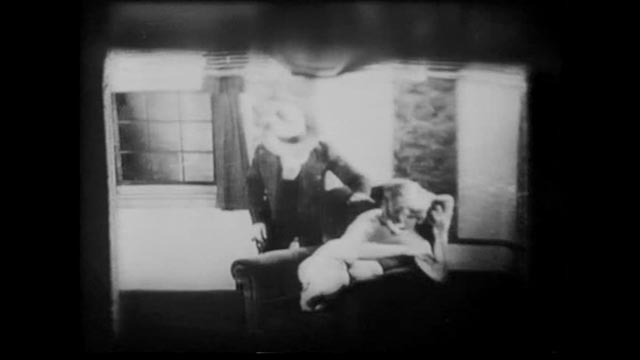 … the potential romance between Alex and Lydia

The Net is very much a film of its time: backing up the internationalism of the scientific group is a liberal sentiment redolent of the idealism of the early years of the United Nations. Heathley voices that sentiment with the following words:

I suppose I’ve always had the feeling that in this world, everyone lives just around the corner and just out of sight of everyone else. But M-7 could change that. It could make this world all our place. It may be simple-minded but I believe that; when that happens, we may learn to trust.

However, Heathley’s ideals also betray an impatience with doing things in any other way but his own. Here, the rigidity of his jawline and the timbre of his voice suggest a barely contained mania that begins to alienate his partners. Ever polite, Lydia is nevertheless alert not only to her husband’s alienation but also to the effect his behaviour has on other colleagues, including Alex, who she senses is intruding into her marital space. But just as Lydia becomes conscious of Michael’s insensitivity, Alex is aware she is susceptible to seduction and to the hurt that might bring. 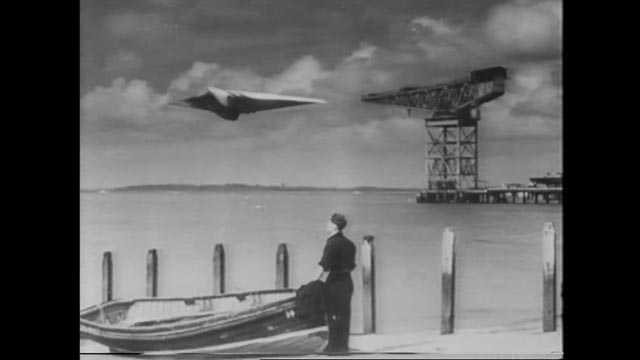 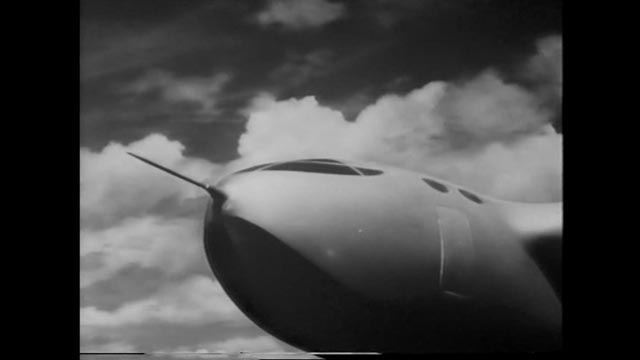 The model effects by Bryan Langley, Bill Warrington and Albert Whitlock make impressive use of a limited budget

A curious although not unexpected phenomenon given the group’s isolation is the need for diversion, including a nearby pub that caters to the scientists – a location that also becomes a conduit for espionage – and house parties that bring colleagues and their spouses together where alcohol and sing-alongs awkwardly combine. One of these diversions is particularly striking for the way it conveys the affair between Lydia and Alex. The two escape to a fairground; upon entering an enclosed area, they engage a peep-show device featuring a short risqué movie entitled What the Butler Saw[1]. Their heads side by side, they gaze at the slightly blurry image of a man lurching from a sofa to embrace a woman. A brief montage intercuts the image with that of the viewers; Lydia and Alex hesitate, then respond to what they’ve seen by kissing. The effect is reminiscent of the episode in A Cottage on Dartmoor when the young lovers and a rival go to the cinema where they are excited less by the images on the screen than by the musicians in the orchestra pit. 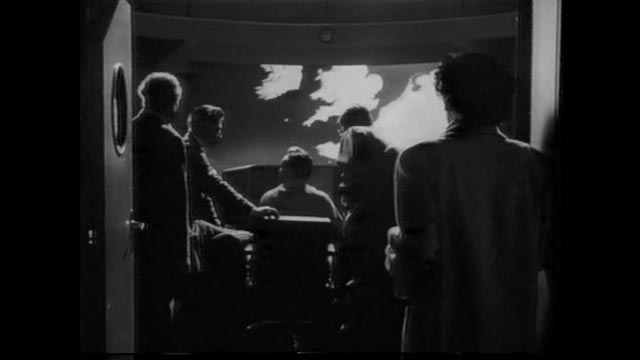 The climax of The Net has Heathley in the cockpit of the M-7, flying beyond supersonic speed, betrayed by a colleague determined at gunpoint to direct the aircraft eastward toward a Cold War enemy base. In the physical struggle Heathley bests the traitor but is no longer able to pilot the plane. The film returns to the question posed by the original argument about giving control back to the home base. This struggle stretches the climax for just over 12 minutes to the very end of the film, and includes (by my count) 211 shots, an average shot length (to use Barry Salt’s terminology) of 3.2 seconds. In other words, the episode is an extended montage intercutting the control room, where Lydia joins Alex and others in the group, the M-7 interior where Michael discovers the traitor’s purpose, and exterior shots of the plane climbing, swooping and diving as the action unfolds. 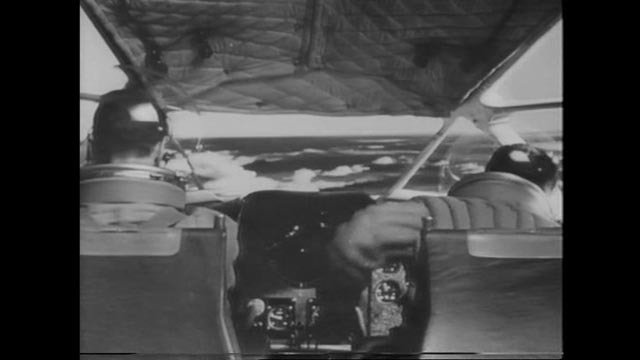 Heathley loses control of the plane during the fight

Lydia is an essential part of this montage. Standing at first just outside the control room, just as she has stood outside the tight group of scientists throughout the drama, Lydia steps across the threshold when the transfer of control is essential to her husband’s survival. Given the failure of communication between the couple up to this moment, Lydia’s now calling out his name and he in turn replying, “Lydia, are you there?” evokes a striking poignancy. Another crucial part of the montage: a two-shot of Brian and Caroline followed by a shot of Alex looking left off-screen towards Lydia, acknowledging the couple’s reunion. Ground control and human connection renewed, the film ends with an image in optimistic contrast with the film’s gloomy opening: the open sky of England’s future. 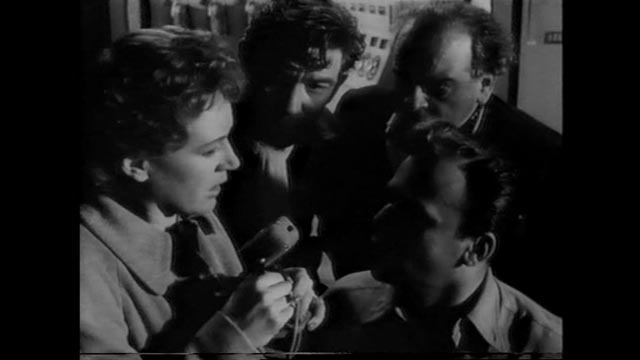 The Net may not have the tabloid thrills of Val Guest’s Quatermass films or the political sophistication of Joseph Losey’s These Are the Damned, but it does offer the integration of restrained set decoration and domestic melodrama into British science fiction. For these qualities alone it deserved inclusion in the Science Fiction volume of Phil Hardy’s Film Encyclopedia of 1984. (Perhaps a revised updated edition will include it.) Further, as I hope these notes suggest, the film sees Anthony Asquith still capable of the cinematic insouciance that excited him as a novice filmmaker.