Michael Dowse’s Goon: Made in Winnipeg

Winnipeg may have been put on the cinematic map by the international success of Guy Maddin, and there have occasionally been other interesting home-grown movies – the best feature ever made here, Greg Hanec’s Downtime (1985), is finally getting a DVD release sometime this year – but mostly, production in Winnipeg falls into the “service” category. Home Alone 5 with Malcolm McDowell and Jodelle Ferland just wrapped here, and crews are kept busy with cable movies, mostly for Lifetime and Hallmark (we seem to have become the go-to location for Hallmark Christmas movies, each worse than the last, though this year’s lack of snow due to a record warm winter may put an end to that!), and cheap direct-to-DVD horror (a few Wishmasters and Wrong Turns).

But occasionally something a bit bigger does drop in. Two years ago, there were a couple of Canada-France co-productions shooting simultaneously. Julian Magnat’s Faces In the Crowd started with a fairly interesting hook – a woman who witnesses a serial killer at work gets a head injury resulting in “face blindness”, so she can’t recognize the killer even if he’s standing in front of her (nor her boyfriend and best friends either) – but the script is pedestrian and the film never builds any tension. Even with Milla Jovovich in the lead, and a guest appearance by Marianne Faithful, it went straight to DVD. 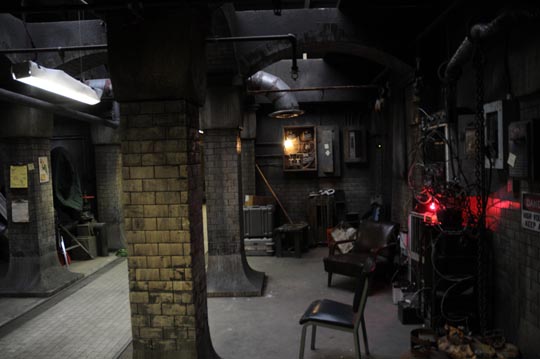 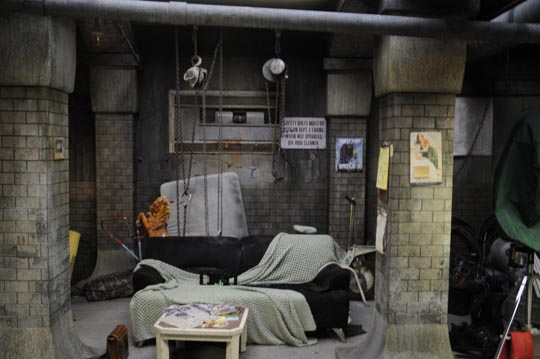 Simultaneously, Xavier Gens, following up the slickly vapid Hitman and his earlier Texas Chainsaw clone, Frontiere(s), came to town to make The Divide. That one, inexplicably, did get a theatrical release, though it’s hard to figure out who the target audience was. Relentlessly unpleasant, without a single recognizably human character, this post-apocalyptic opus is even more joylessly sadistic than the Hostel and Saw franchises. On the other hand, at the level of craft – camera, editing, performances – it’s actually quite well made.

Best of all are the very impressive sets, designed by Tony Noble (who designed one of my favourite films of the past decade, Duncan Jones’ Moon [2009]) and built by my friend Gord Wilding and his crew. Standing in that grungy basement shelter, you got a genuine sense of being trapped in a nasty, claustrophobic space, and if the characters had been better thought out, the movie might well have worked as a Lord of the Flies-type story about ordinary people devolving in harsh circumstances.

Anyway, all of this is mere preamble to explain why Michael Dowse’s violent hockey comedy Goon came as a welcome surprise. Shot here last year, with Gord as production designer, it’s a minor piece of work, but genuinely entertaining. I actually laughed out loud quite frequently while watching it in a fairly crowded theatre at a Tuesday matinee several weeks after it opened.

I should mention that I have no interest in sports (never have) and thus know nothing about hockey. I have friends who are fans of the game, and one of them refuses to see the movie because he finds the idea that fans are there just to see the fights offensive. But as an outsider with vague memories of George Roy Hill’s Slap Shot (1977), I enjoyed this “fact-based” story of a dumb but likeable guy with no talent other than having a head like a brick and fists to match. 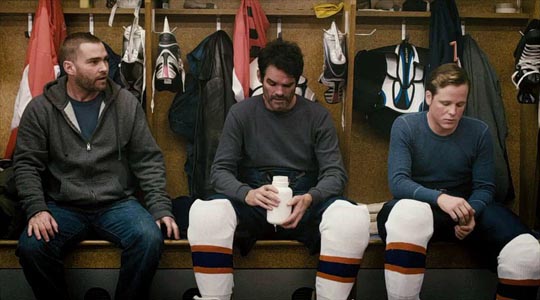 After decking an angry player in the stands at a local minor league game, Doug Glatt (Seann William Scott) is recruited by the team even though he can’t skate. After some training, he hits the ice as an enforcer, a player whose sole purpose is to take out members of the opposing team. He’s so good at it that he gets the nickname “the Thug” and is transferred to a better team, his job specifically to protect a star player, Xavier Laflamme (Marc-Andre Grondin), who’s got performance problems after receiving a concussion from Ross Rhea, another enforcer, played surprisingly by Liev Schreiber. In a parody of the typical sports movie structure in which the underdog gradually makes his way to the big moment when he gets a chance to win against the odds, Goon heads inexorably towards the moment when Doug and the soon-to-retire Rhea get to throw down the gloves and beat the crap out of each other.

There’s nothing particularly new in any of this and if the film has one weakness it’s that the script by Jay Baruchel and Evan Goldberg (based on a memoir by Doug Smith, a player known for his fighting skills) doesn’t stretch for something more than the essentials. I found myself wishing that it went deeper into the relationship between Doug and his uptight, middle class Jewish parents who are appalled that he uses his head to break noses rather than for more intellectual pursuits; or the relationship between Doug and his roomie, Laflamme, the player who’s been driven to drugs and sex as a way to dull his fears of further injury.

Crude and no doubt offensive in its relentlessly sexist and homophobic jock talk, the script nonetheless conjures up some appealing characters and at least attempts to counter the more “incorrect” elements by introducing Doug’s gay brother and Eva (Alison Pill), the sweet hometown girl who falls for Doug. There’s genuine charm in their tentative relationship. Despite the opportunity the script provides for cartoonish caricature, the cast for the most part underplays effectively. Seann William Scott, himself something of a walking cartoon, makes Doug a sympathetic hero and Alison Pill brings a natural charm to the girl who likes to sleep around and finds herself surprised by her own attraction to this simple, unaffected guy. Although only given small moments, the team members make the locker room scenes lively and funny, while Liev Schreiber, as the ageing enforcer on his way out, plays his role straight, a warning to Doug of the inevitable dead end he’s heading towards. Schreiber also gives a pretty good impersonation of a Newfoundlander.

Somehow I’ve managed to miss Dowse’s previous films, Fubar 1 & 2 (2002, 2010) and It’s All Gone Pete Tong (2004), but Goon shows a relaxed and natural comic sensibility which gives the movie an appealing lightness despite the scenes of bone-crunching on-ice violence. And there’s a grungy authenticity to the design which helps to make it seem more than just a dumb jock comedy.

Will this ever end?