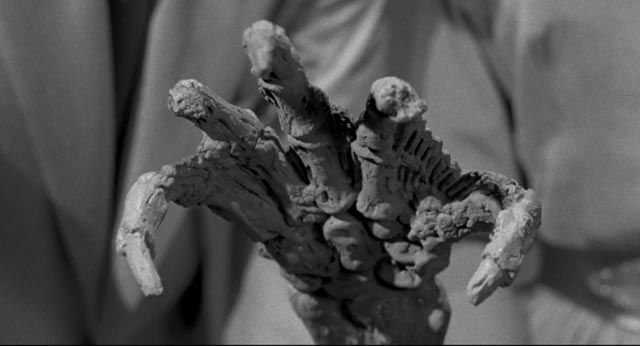 The fossil claw, in your eye, in Jack Arnold’s Creature From the Black Lagoon 3D (1954)

There were a couple of changes to this year’s New Year ritual. For a long time now, I’ve gone over to my friend Steve’s for some major eating, drinking and socializing, with maybe a movie or two to see out the old year and see in the new. For most of those years, our mutual friends Mike and Susan were also there for the eating, drinking and socializing (they always left before the movies). This year was the first since I can remember that Mike and Susan weren’t a part of the evening – they moved in retirement out west to Victoria a few months back. The evening was a lot of fun, but there was a discernible hole nonetheless.

The second change relates to the movie-watching part. Steve had just acquired a couple of 3D headsets to go with his 55” TV. At first, things didn’t look too promising – he couldn’t get the sets to register with the TV (apparently a pretty common problem if you believe all the complaint threads on-line). In fact, he was ready to give up and send the sets back to Amazon … but gave it one more last minute try and achieved lift-off on the afternoon of the 31st. 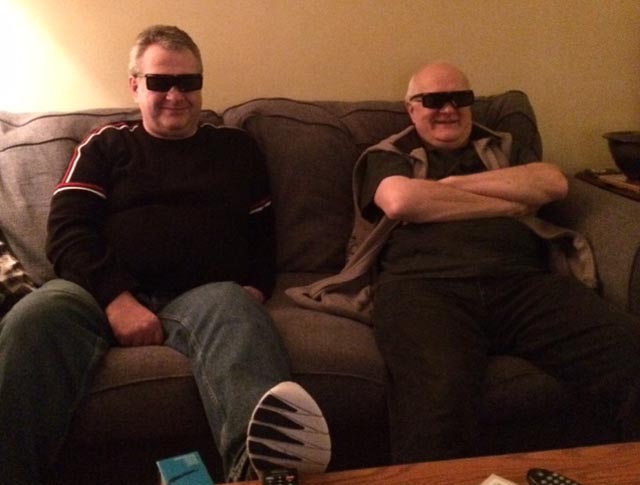 Although he’s had the TV for a couple of years, the impetus for finally buying the glasses was a couple of Blu-rays his kids gave him for Christmas: Jack Arnold’s The Creature From the Black Lagoon and It Came From Outer Space. He watched all of the first and the opening moments of the second during the afternoon and pronounced the experience pretty good. (His wife Val mentioned some distinct visual discomfort, however.)

I always take a selection of disks with me for the evening (though in recent years we often end up watching something on Netflix – last year it was Ridley Scott’s overrated The Martian). As I have a number of 3D Blu-rays in my collection (as parts of dual-format editions – I’ve watched them all in 2D), I grabbed a few so we could sample the technology.

As usual, the party broke up by around 10:00 – the kids heading out to other parties, other guests leaving, and Val disappearing into another room to watch the hockey game she’d been recording during dinner – and Steve and I settled down to judge his new toy. 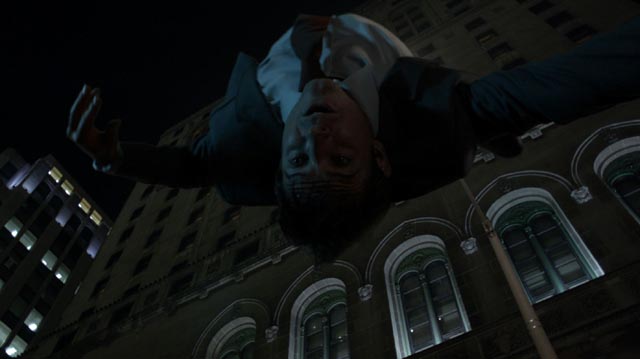 First up was the opening scenes of Doug Aarniokoski’s Nurse 3D (2013), the retro exploitation thriller about a nurse (Paz de la Huerta) who uses her sexual allure to attract married men looking to cheat on their wives so she can lecture them about morality as she kills them. The sense of 3D space wasn’t bad, with appropriately layered images.

Dracula, tired of being a bat or a wolf, tries something new in Dario Argento’s Dracula 3D (2012)

Next, there was Dario Argento’s Dracula 3-D (2012), a disappointing movie in any format. Again, there was a decent sense of space as the camera tracked through narrow cobbled streets. Steve quickly found the movie dull, so we skipped ahead and landed on the scene with Dario’s daughter Asia taking a bath – once again I found his penchant for shooting his daughter in the nude somewhat creepy. Then ahead again so I could show Steve the jaw-droppingly ludicrous bit where Dracula turns himself into a giant praying mantis. That certainly didn’t work any better in 3D. 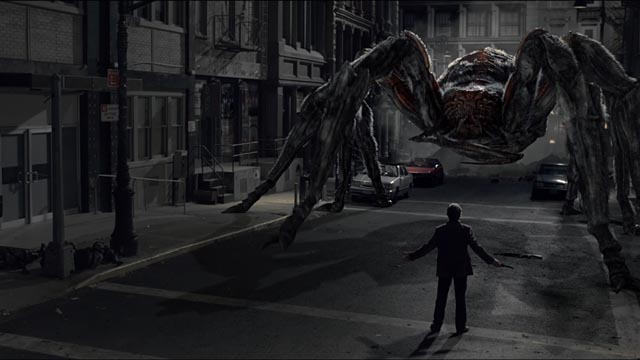 Why, oh why does space radiation cause so many problems? Tibor Takacs’ Spiders 3D (2011)

Third was Tibor Takacs’ Spiders (2011). I’d picked that up a couple of years back for two main reasons: first, Tibor is a buddy of my friend Gord Wilding, who’s production designed several movies for him both here in Winnipeg and in Bulgaria (Gord’s work on Killer Rats in 2003 gives me my one degree of separation from Ron Perlman); and second, how can you pass up a movie in which Xander from Starship Troopers appears as a New York transit supervisor battling an invasion of giant spiders in the subway? The spider effects turn out to be pretty good in 3D – and certainly a vast improvement over the dire CG critters in Tibor’s Ice Spiders (2007). We watched the opening with its space debris colliding with an orbiting research station swarming with the deadly arachnids (the result of a Russian genetic experiment gone wrong), then skipped ahead to the battle in the street where an army unit (commanded by poor Lieutenant Gorman from Aliens, once again out of his depth with an alien menace) is overrun by a swarm of mid-size mutant spiders, actually a pretty effective mix of stunts and CG effects. 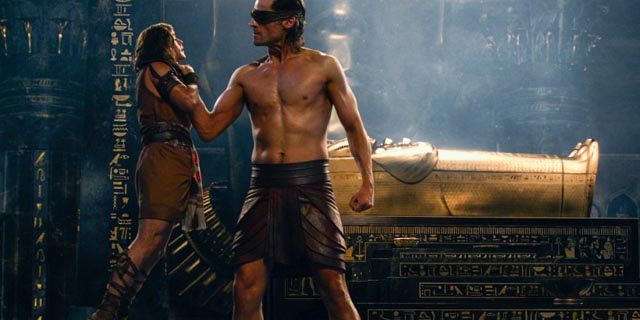 Then we popped in Alex Proyas’ Gods of Egypt (2016), and it was immediately apparent that this was designed and shot with a very clear sense of the possibilities of 3D. Steve hadn’t seen it before and opted for watching the entire film this time, a decision with which I concurred as I’d really enjoyed it in 2D. This is one of those movies where I’m baffled by audience and critical hostility; it’s an epic fantasy which creates a world in rich detail and packs it with a lot of narrative. Criticisms that it’s silly or unbelievable or whatever are irrelevant – this belongs in a direct line with movies like The Thief of Bagdad (both the 1924 and 1940 versions) and Ray Harryhausen’s Sinbad movies and Jason and the Argonauts … and even more appropriately, Clash of the Titans. To reject these films for being silly is to reject a whole area of imaginative storytelling. (Tarsem Singh’s Immortals and Andrew Stanton’s John Carter also suffered from this strange contempt.) The other common complaint, that it’s cast with white Europeans instead of Middle Eastern or North African actors, also seems odd to me, as if trying to drag the film towards some kind of historic verisimilitude when every aspect of the story is rooted in pure fantasy – it’s a story of gods and mortals located on, as Proyas puts it, “Planet Egypt”, not a plodding attempt to give a gloss of realism to stories from the Bible like Ridley Scott’s Exodus: Gods and Kings.

Anyway, Steve and I thoroughly enjoyed the spectacle and adventure – and the 3D ambience of the imagery.

To wrap up the evening, despite feeling some real eye fatigue after 3 1/2 hours of wearing the glasses, we watched a few scenes from The Creature From the Black Lagoon and It Came From Outer Space. Not surprisingly, these are simpler, less visually cluttered movies and that in itself was quite pleasing. We watched the opening discovery of the fossil claw in the former, then skipped ahead to Julie Adams’ swim, which is quite appealing in 3D; the pool in which it was shot was full of debris which floated in front of our eyes and the compositions with Adams above and the Creature below mirroring her movements have a genuine charm. 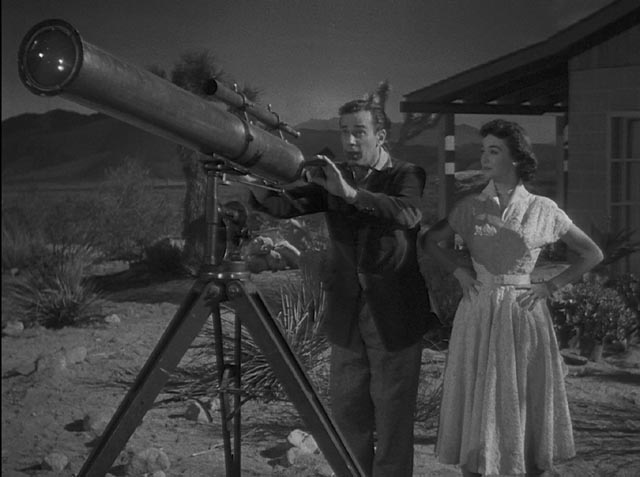 As for the opening of It Came From Outer Space, I was far more aware in 3D of the support mechanism holding up the flaming meteor, and was startled when Steve pointed out a massive flaw in the shot in which the meteor rushes straight at the camera – just before it explodes, on the left side of the screen, a glass surface reflecting the meteor is plainly visible. When I got home, I took a quick look at my old DVD of the movie and the support is actually visible there, though I hadn’t really noticed it before, but that reflecting object to the left isn’t visible. I’d have to make a side-by-side comparison, but I suspect that the shot had been reframed in the DVD transfer to cut it out. 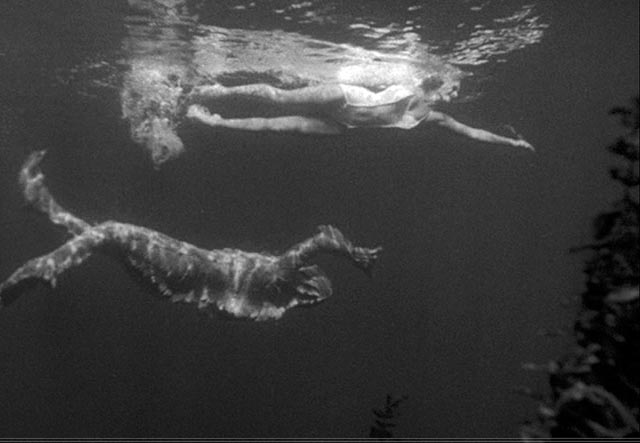 Julie Adams is unaware of the Creature’s underwater mating dance

Despite all the technical sophistication of the newer movies we sampled, I have to confess that for me the real highpoints of the evening were the poke-in-the-eye moments in Jack Arnold’s two movies – the fossil claw jutting out of the cliff face in Creature and Richard Carlson’s amusingly large telescope in Outer Space. These shots made me realize a couple of things: first, in the newer films, seldom if ever do the 3D effects jut forward out of the screen – rather, all the depth falls behind the screen, as if you’re looking at the image through a window. And second, these days, in order to avoid accusations of being cheesy and gimmicky, makers of 3D movies generally avoid this kind of direct ocular assault. And yet, for me, these moments – like the guy with the paddle ball at the start of House of Wax, or the Baron kneeling facing the camera at the end of Andy Warhol’s Frankenstein, the lance jutting out into the audience with his liver impaled on the end, ready to drop into your lap – are what make 3D fun.

As I walked home at 1:45 through the snow on a bright, clear night, the streets around me appeared in full 3D … but nothing suddenly poked out to startle me. When you think about it, what’s the value of an elaborate technology which merely mimics what you see all the time?