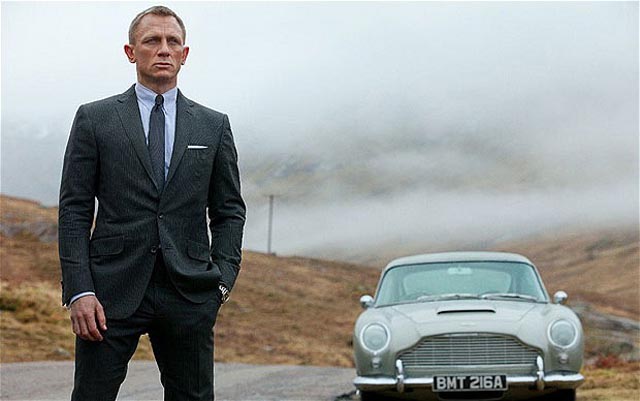 Well, they got the car right …

The critical consensus seems to be that Skyfall is the greatest James Bond movie ever. So, naturally, I had such major problems with it that it left me feeling irritated, despite having sat through all 22 of the previous movies – well, 23 if you count Never Say Never Again, or 24 if you include the original Casino Royale parody – with varying degrees of enjoyment and occasional disappointment. I have to confess that Daniel Craig, although a decent actor, really doesn’t fit the Bond mold for me – too much the thug, too little the suave womanizer.

Not that Skyfall is totally devoid of interest – Roger Deakins’ moody photography, a pre-title action sequence which ranks with the best the series has to offer. In fact, the titles themselves are the best in years and Adele’s theme song comes close to capturing the quality of the great early ones, almost up there with Shirley Bassey’s Goldfinger.

But what’s fundamentally wrong with the movie is a matter of tone and attitude. Will we ever be able to get away from tortured angsty heroes? Director Sam Mendes and his team of scriptwriters have taken the Dark Knight road here with Bond haunted by his past. He’s brooding and gloomy to the point of seeming emotionally dead. When the villain puts a bullet through the head of the beautiful women who recently helped 007 and with whom he apparently had a pleasant sexual encounter, there’s no reaction. 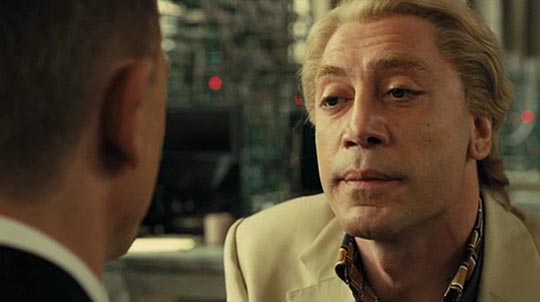 This is supposed to be fun, Mr Bond

And then there’s that villain, Javier Bardem’s Silva. Bardem plays him with such ferocious humour that he seems to be ridiculing the whole idea of the 50-year-old series. The scene in which he taunts a tied-up 007 with overheated homoerotic provocations is so funny that it derails the film. It never really recovers and I was left longing for more of the same – but unfortunately the script reigns Silva in and he becomes merely a plot function, and a poorly conceived one at that.

There’s no threat to world peace involved in this episode of Bond’s adventures. The stakes are embarrassingly small and personal. Mendes and the writers have decided that what a big popcorn action franchise like this needs is “psychology” and they serve up a ludicrous narrative of two “brothers” in a deadly struggle for the love of a distant and frighteningly stern “mother”.

You see, Silva was betrayed by M (Judi Dench) and tossed to the Chinese wolves when he became compromised. So now he wants to punish her. Bond too was betrayed when she ordered another agent to take a shot at a bad guy in the opening sequence while Bond was in the way. It’s only when M has been targeted by Silva that Bond returns from hiding out on the beach where he was recovering from his wounds; being the “good son”, he sets aside his bitterness and humourlessly goes about protecting her as Silva closes in. 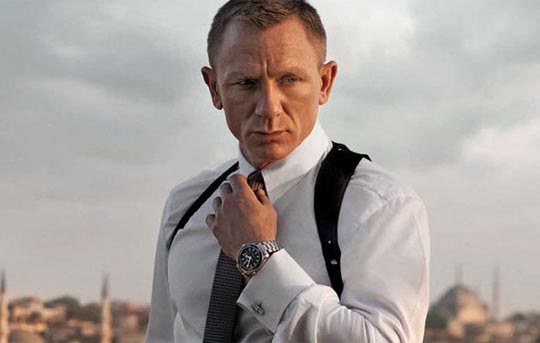 Am I brooding enough?

The entire end section hammers at the family drama relentlessly as Bond takes M back to his old family home on a remote Scottish moor, the place where he was orphaned at an early age and which is still maintained by a crusty old gamekeeper (a hilariously cartoonish Albert Finney). Here we get to glimpse the ghosts which have apparently haunted Bond and made him the cold-blooded killer he is; but not to worry because during Silva’s attack the entire place will be obliterated, no doubt psychologically freeing James (though whether that might undermine his effectiveness as an agent remains to be seen).

In Skyfall, instead of a high-testosterone romp, we get to see Craig and Bardem reduced to a strange infantile contest for mother’s love – yet she only loves one of them and she pays a high price for withholding her affection from Silva, in the end dying in Bond’s arms. There’s a strangely creepy echo here of the ending of On Her Majesty’s Secret Service, the only Bond film in which 007 has an actual adult relationship with a woman (Diana Rigg), who is killed just after they get married. That’s the only time in the series when he gets to show genuinely mature emotion, the intense pain of loss. Here in Skyfall, he’s reduced to a little boy crying over his Mommy.

There are elements in the movie which try to turn back the clock, to reestablish contact with the earlier great days of Bond (i.e. the Connery years) – the banter with the new Q, the resurrection of the Aston Martin DB5 from Goldfinger – and the ending obviously desperately wants to restore the series to what it once was: we get a new Miss Moneypenny and Ralph Fiennes installed as a seriously masculine M (daddy back in charge at last).

But as long as Craig maintains his grim, dark, humourless angst the series is doomed to be devoid of the fun which once made even the lamer entries at least entertaining.