… which transforms into an orbiting weapons platform through an edit that bridges millions of years.

We human beings love to make lists, putting things in order, ranking their relative value. It’s apparently in our genes. We also love to dispute each other’s choices, our first response to someone else’s list being to say “yes, but what about …?” When it comes to movies, we’re inundated with year-end 10-best lists, regular best-this and best-that lists; every ten years or so, we get the “best films of all time”-list revisions, reflecting shifting critical opinions – Citizen Kane ruled for decades, but was more recently displaced by Vertigo, a movie which had suffered a, shall we say, conflicted critical reception on its original release and for many years after.

While list-making can often be an enjoyable game, a way to prod people out of complacency and provoke discussion and sometimes heated disputes, it can also have practical motivations. The once-prestigious American Film Institute devolved many years ago into a machine for producing seemingly endless 100-best lists, which seem largely to have been designed to promote home-video sales by providing viewers with lists of titles they really ought to see (and buy).

I used to make lists myself, poring over my records at the end of every year and whittling down the past twelve months of viewing into “the ten best” movies I’d seen. I get together with a group of friends every January to share our lists, but in recent years I’ve given up trying to rank what I see. Such choices began to seem arbitrary and contingent, tending to change with my current mood; but they also began to seem impossible to justify as I saw more and more movies. When you see a handful, it’s easy to say which you think is the best, but when you’ve seen hundreds or thousands it’s so much harder to weigh them all against one another and pretend to make a definitive judgment. Now I take to those evenings a long list of what I found interesting in the past year – movies both good and bad, just as long as there’s something worth saying about them.

In the end, although you’ll often find a lot of agreement among different people’s lists, they’re obviously subjective … and rooted in the limits of what people have had access to. Mainstream critics tend to cluster (like awards juries and Academy voters) around certain titles which have forced their way into the general consciousness, but aren’t really drawn from all that’s been released during the year. And there’s a certain pretension to making “anti-lists” against that grain (a la Cinema Scope), by drawing on obscure, difficult-to-see titles (difficult to see unless you have access to a whole lot of festivals around the world).

Some lists seem implausible and pointless other than as a means to provoke a response, or more positively a discussion … like this recent “Top 10 Most Effective Editing Moments of All Time” list posted on the CineFix YouTube channel (which regularly posts such lists) …

The first thing one notices is that most of the choices seem obvious and predictable – high-profile moments from prominent mainstream movies – and even the two selections which stand outside the Hollywood standard (Battleship Potemkin and Un Chien Andalou) aren’t surprising, being two of the most commonly seen films in any film history class. The flashy opening of City of God (#10) is an effective start to a flashy movie, but the technique is heavily influenced by the standard music video style, and isolated as it is here it doesn’t look much different from any one of Michael Bay’s montages.

Lawrence blows out a match …

The examples drawn from 2001: A Space Odyssey (#2) and Lawrence of Arabia (#1) are both single transitional edits rather than scene building. Transitions can be striking, surprising, thematically loaded as they are in these two examples (although the full meaning of Kubrick’s cut from the bone tossed into the air by an apeman to an orbiting satellite millions of years later isn’t fully apparent unless you’ve read Arthur C. Clarke’s novel or seen interviews about the film: the satellite is actually an advanced weapons platform, representing human progress in a very dark way from crude club to nuclear bombs in a single cut). But as impressive as that cut and the one from Lawrence’s match to the desert sunrise are, such juxtapositions are not the toughest kind of editing (and can be used for a joke just as easily as a profound statement: the cut from a character falling into a wood-chipper to a blob of jam splatting on a breakfast plate in Dark Night of the Scarecrow, for instance). Such moments are easy to pick out (are Kubrick’s and Lean’s cuts really that much more powerful than Cimino’s cut from the misty Pennsylvania hills to a Vietnamese village being torched in The Deer Hunter?); but what’s more important to a movie’s effectiveness is the internal editing of scenes and the movement forward from each scene to the next, which gives every movie its rhythm, its pace, and its emotional flow.

And, of course, those isolated moments only possess the power they have because of the larger context in which they occur. Which is why to single out a specific cut like those in 2001 and Lawrence as “the greatest” is actually to obscure the real essence of editing – the thousands of micro-choices which lead, through experience, intuition, personal taste and creative idiosyncrasy, to the work as a whole.

While there’s nothing in the CineFix list likely to provoke an objection, like many of its kind it automatically pushes that “yes, but what about …?” button, as seen in the 200+ comments posted by YouTube viewers. The stream of other titles offered merely goes to show how futile an attempt to define the “10 most memorable edits” really is.

But this difficulty comes from something a little more than merely the sheer volume of choices we can draw from. It’s rooted in the nature of editing itself. Editing simply isn’t a separate, separable element within a film – not like photography, performance, writing, music; more than any other single function in filmmaking, it’s a holistic process rather than a thing-in-itself. This is why editing and editors have long been the most invisible aspect of filmmaking … when it’s working well, editing can’t be seen because its entire purpose is to involve the viewer in the larger context of the movie, whether it’s approached intellectually (Bunuel, Eisenstein), viscerally (Peckinpah, surprisingly not included in the list), or emotionally (the classic Hollywood paradigm). 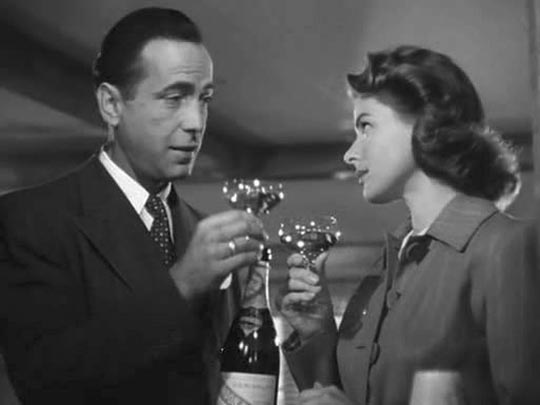 Rick and Ilsa in happier times

To take just one example, both classic and popular, think about Casablanca: there’s no finer example of what the Hollywood studios of the golden age were capable of. Two scenes in particular stand out for their editing (which is inextricably bound up with the shot choices of director Michael Curtiz, the rich photography of Arthur Edeson, the lush music of Max Steiner, and the screen personas of the actors). First, the scene in which Rick (Humphrey Bogart) hears piano-player Sam (Dooley Wilson) playing the song “As Time Goes By” and angrily hurries across the bar to tell him to stop – and then sees Ilsa (Ingrid Bergman) sitting there. The exchange of glances between the three characters evokes a complex mix of emotions which the audience feel even before they know the story behind them. By the time we reach the climax at the airport, we know the entire story, we’re fully invested in the complex romantic narrative, and yet we’re conflicted about how we want it to play out (in fact the filmmakers toyed with several different versions of the ending before settling on what we now accept as the perfect solution). Again, the scene plays through a series of exchanged glances combined with Steiner’s music and the dramatic sound of plane engines firing up. While the conclusion of Casablanca satisfies in its narrative details – the characters all end up where they need to be to reflect their best natures – it’s in the editing of those dramatic close-ups that we feel the rightness of it and exit the movie feeling completely sated. 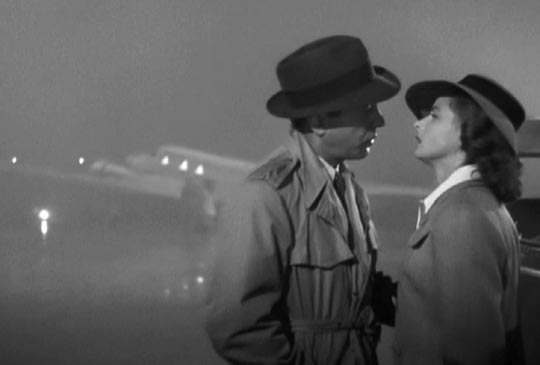 The exchanges of glances in those two scenes from Casablanca draw the viewer deeply into the emotional and psychological states of the characters and that’s what we feel and respond to – perhaps later we can get a little distance and observe just how skilfully the work has been done, but in the moment (even when that moment has been experienced countless times on repeat viewings), it’s the emotion we feel. Some find this manipulative (I can recall reading a critic years ago, though I now forget which one, who objected to the “Marseillaise” scene in Casablanca as playing on our basest nationalistic and culturally chauvinistic inclinations), but part of what we come to movies for is to have our emotions manipulated – what matters is the skill and efficacy with which it’s done, and therein lies the value of editing.

And so those two scenes, I’d suggest, are every bit as great as the ones offered in the CineFix list. As are any number of others I can think of off the top of my head: the opening of Citizen Kane, the rejection scene in Chimes At Midnight, the death of Jeff Goldblum in McCabe and Mrs Miller, the death of Sterling Hayden in The Long Goodbye. And what about “editing” within the image, that is, the use of long, complex shots where the editing function (which is a way of directing viewer attention) is performed by camera moves and staging? The remarkable time shifts achieved by Angelopoulos in The Travelling Players, for instance; the spa scene in Fellini’s 8 1/2 … My point is that editing is woven into the fabric of every film, and is an essential part of every great film, and so to single out one particular moment, and as in this list one particular cut, is actually to separate editing from its core function.

The limitations of the CineFix list are immediately apparent from the fact that seven of the films were made in the twenty years between 1959 and 1979, with two from the 1920s and one from 2002; in addition, two of the ten were directed by Alfred Hitchcock and another two by Francis Ford Coppola, indicating a very narrow sampling.

One thought on “The limits of list-making”