There are always risks involved when revisiting a movie that impressed you years ago, when you were a lot younger and no doubt more arrogant but less wise. But it’s hard to resist taking the chance. Last year I was pleasantly surprised to find that Andrew Marton’s Crack in the World was not only just as I remembered it, but also actually a pretty good movie. 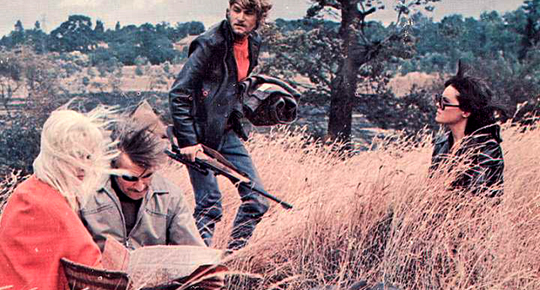 I saw Cornel Wilde’s No Blade of Grass (1970) a couple of times on its original release. I would have been 16 back then, and there hadn’t been a lot of grim disaster movies to prepare me for it. Its darkness and savagery left a deep impression, and I’ve been looking for it on home video for decades now. So it was good news when the Warner Archive announced a remastered edition. It arrived this week and I threw it in the DVD player immediately and sat back nervously, prepared to be disappointed but hoping for the best.

What I hadn’t been prepared for, though, was the inexplicable mastering error which puts the film’s reels in the wrong order on the disk. About 37 minutes in, there’s a confusing narrative jump, far more disorienting than Wilde’s unnecessary flash-forwards which occasionally diminish the impact of major sequences. That narrative gap turned out to be almost 18 minutes long, the missing material showing up eventually to interrupt a battle scene witnessed by the small band of survivors, an attack on a farm by a renegade military unit.

Needless to say, this inadvertent (and unforgivable) non-linearity severely undermined my experience of rediscovery. But even despite the problem, I wasn’t disappointed by the film. Yes, Wilde’s approach is heavy-handed, but it’s interesting to see the arguments about climate change and the environmental damage done by human activity which are so pervasive now already spelled out quite clearly in this rough, often nasty, sci-fi adventure made more than 40 years ago.

I can remember the moment in the film when it took hold of me back in 1970. Having sketched in the background, Wilde gets to the point where the Custance family are preparing to flee from London after having received a warning from a friend that the government is planning to seal off the city, possibly with the intention of killing the entire population to relieve pressure on the nation’s diminishing food supplies. As they leave their house in the middle of the night, they’re approached by a police constable in traditional “bobby” uniform. This was just four years after I left England for Canada, and I can recall the almost visceral shock I felt when I realized that the constable was carrying an automatic weapon – this was a detail which signalled just how desperate the situation facing the characters was. No doubt, an average North American viewer wouldn’t have felt anything like that shock, but for a kid from England where the police never carried guns, it conveyed a conceptual shift which clearly spelled the end of the world as I knew it.

Cornel Wilde didn’t direct many movies, and his aesthetic was what you might call primitive, but there’s no denying the raw power of The Naked Prey (1966), Beach Red (1967) and No Blade of Grass. He had a vision of human beings as animals whose inner nature is barely contained by the trappings of civilization, and in these three films those trappings are stripped away – in The Naked Prey, the protagonist has to fight for survival alone and unarmed in the African wilderness; in Beach Red, American and Japanese troops are caught in a bloody struggle for possession of a Pacific island; and in No Blade of Grass, an ordinary middle class family face the complete collapse of society as a worldwide famine forces people to turn against each other for possession of rapidly dwindling food supplies. What makes Grass so shocking is the ease with which the characters adapt to the new violent reality. Unlike “fun” catastrophe movies (Michael Bay’s Armageddon [1998], say, or Roland Emmerich’s 2012 [2009]), Wilde’s film more closely resembles the great ’70s BBC series Survivors in its depiction of the sheer, unpleasant hard work of survival. It’s not a pretty picture, but Wilde presents it with genuine conviction.

Apart from the mastering error, the Warner Archive disk presents generally good image quality. There is some speckling, particularly near the beginning, and occasionally some intrusive graininess which appears to result from varying quality in the original photography. Although it would have been nice if Criterion had included No Blade of Grass and Beach Red in a Wilde set when they released their edition of The Naked Prey a few years ago, I’m grateful that Warners have finally made it available, even if it is just on DVDr … and who knows, maybe I’ll even be able to get a replacement copy from them when they fix the mastering problem!

P.S. The DVD is currently listed as “unavailable” on Amazon, so I assume Warner Archive is in the process of correcting the error before resuming sales — one of the benefits of burn-on-demand. Meanwhile, I’ve ripped the DVD and put the reels back in order in FinalCut Pro, so I can at least watch it again in my own “illegitimate” version: it took me very little time, so Warners should manage to make the correction quickly.

P.P.S. 8/12/11 Warners informs me that they’ll only be replacing copies bought directly from them, so I had to return my copy to Amazon for a refund.

P.P.P.S I eventually bought a copy of the corrected disk, so now it’s a handy part of my collection.

One thought on “Disk error: No Blade of Grass (Warner Archive)”