← DVD Review: The Making of the President: The 1960s
My movie map of Winnipeg — part two → 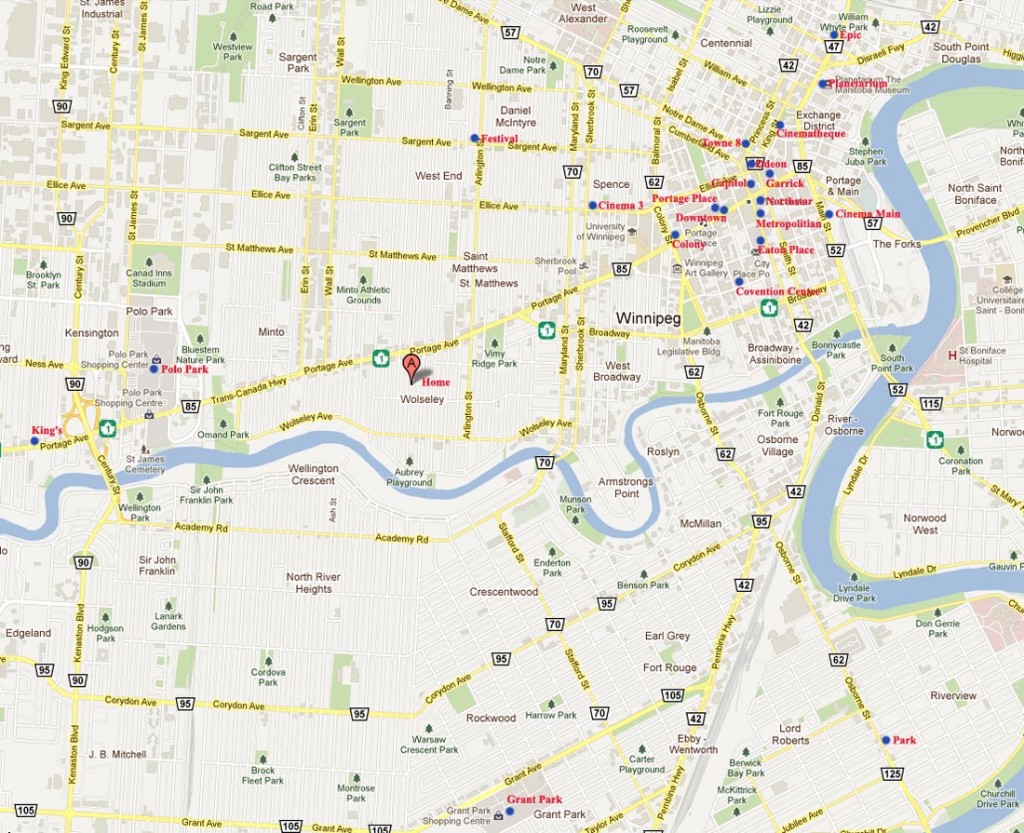 When I first arrived in Winnipeg back in 1973, I took a room in a boarding house in the Wolseley area, within walking distance of downtown. I quickly formed a mental map of the city which was anchored by two elements: bookstores and movie theatres. Although I’ve since had many addresses in Winnipeg and other places, when I came back in 1999 from a year in Toronto, where I attended the Canadian Film Centre as a resident editor, I took an apartment which happened to be just three blocks from that boarding house. But virtually none of those old anchor points remained.

There weren’t a lot of bookstores in the early ’70s – the Classics across Portage Avenue from the University of Winnipeg; the book departments of Eaton’s and the Bay; a great little fantasy/sci-fi store called the Galaxy Bookshop on Hargrave Street; and Don Unruh’s terrific used book and music store, Pyramid Records, first on Donald Street, then on Portage. But there were quite a few movie theatres in and around the city centre.

On the June 24th opening night of Terrence Malick’s The Tree of Life, I caught a screening at the Grant Park Cinemas, an eight-plex occupying the space in the Grant Park Mall which had once held a large, Cinerama-style single screen (720 seats; it was split into four in 1989, with another four screens added in 1998, for a final total of 1600 seats). I can remember seeing Gone With the Wind for the first time on that screen, probably in the early ’80s when it received a re-release disastrously cropped to appear “widescreen” – in two-shots involving a seated Scarlett and a standing Rhett, all you could see was his chin and her forehead.

Back in the day, the Grant Park Cinema pretty much represented the outer edges of the city in my mind, as I liked my world to be contained within walking distance. I still have only a vague sense of the surrounding districts – Transcona, the North End, St James, Charleswood, St Vital and so on … 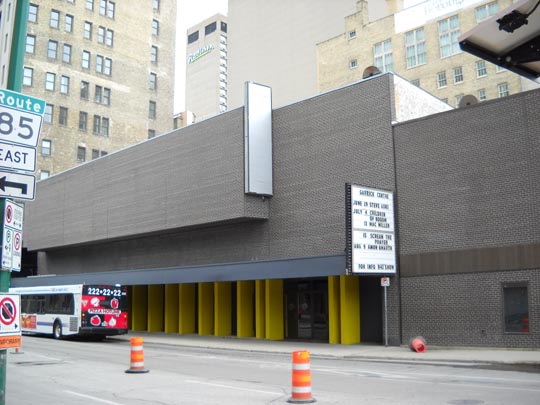 There were a lot more theatres back in those days, mostly single-screen, and they all had their own atmosphere – you might even say “personality”. The Garrick on Garry Street had two screens (combined capacity 1400), both, like the Grant Park, curved in pseudo-Cinerama style, though they were not Cinerama-sized. Later on, the Garrick expanded by adding two smaller auditoriums on the north side, characterless boxes (adding about 500 more seats). I think it was at the Garrick that I saw Brian De Palma’s Phantom of the Paradise on a stormy evening early in January 1975; I was killing time before flying to England that night – the airport was shut down a couple of hours after I left because of the blizzard. Phantom went on to play for a year straight in Winnipeg, the only place in North America where it was a hit. And I still remember well that peculiarly druggy moment in Wes Craven’s Nightmare On Elm Street, also seen at the Garrick, when Freddy’s arms stretch out impossibly across the shadowy back alley as he pursues one of his victims. The Garrick closed in 2002 and is now used as a conference and occasional performance venue; I saw John Waters live there last winter. 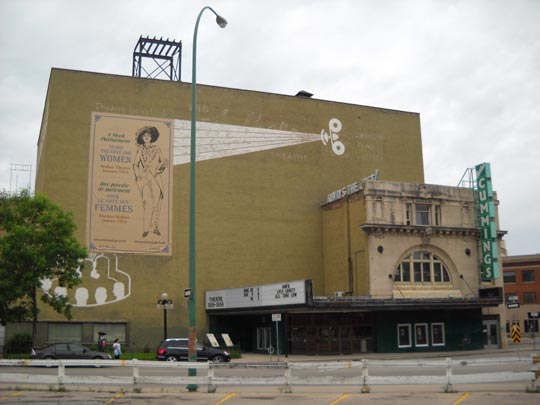 A block north and west of the Garrick was the Odeon (over 1100 seats). This was a beautiful old legitimate theatre converted long ago to showing movies, but the interior had never been “done over”, so there were box seats at the sides, and ornate decorations on the walls and ceiling. It was also the local head office for the Odeon chain, so there was a small screening room off to the side where press showings were offered; I went to a few there when I was writing reviews for the University of Winnipeg’s student paper, the Uniter. The only one I can remember seeing, though, was Fred Walton’s When a Stranger Calls; one of the first “urban legend” thrillers, it starts with an effective sequence which would work as a stand-alone short, but then drags the premise out interminably as it tries to repeat the same brief story at feature length.

The Odeon has long since reverted to a live performance venue, first under its original name, the Walker, more recently inelegantly renamed the Burton Cummings Theatre for the Performing Arts. 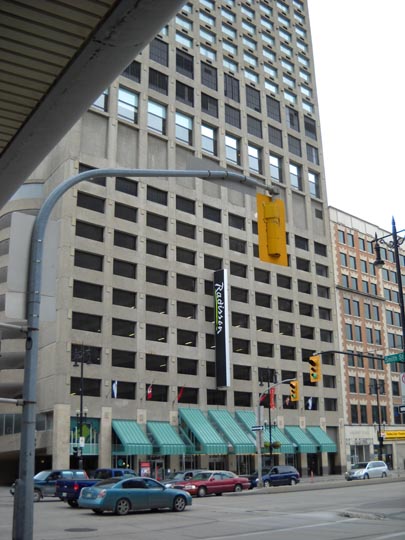 Just a block away on the south side of Portage Avenue was the two-screen Northstar (combined capacity of about 1100), located in the basement of the Northstar Hotel (which has gone through so many different owners that it’s hard to remember what it’s called on any particular day). The Northstar’s auditoriums were quite large and long and pretty comfortable. I saw several of Ely Landau’s American Film Theater “special presentations” there in the mid-’70s, including John Frankenheimer’s great version of O’Neil’s The Iceman Cometh. There was also William Friedkin’s controversial Cruising.

Nearby, half a block north and half a block south on Donald Street were the two great downtown theatres: the Metropolitan to the south, the Capitol to the north. 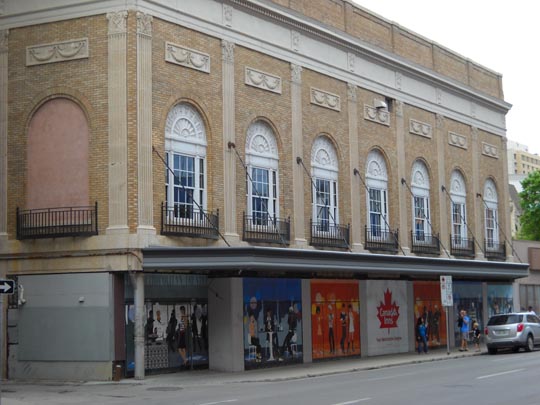 The Met, finally revived in 2012 as a restaurant, bar and event location

The Met was an old-style theatre (1800 seats), ornately decorated, with a large mezzanine, and a towering ceiling in the auditorium with an upper balcony that felt high enough to give you a nosebleed. I remember sitting way up there in the back row, just below the projection booth window, for a screening of Jean-Jacques Annaud’s ridiculous Quest For Fire and feeling like I needed binoculars to see anything. Several years later, I was sitting much closer to the screen on the ground level for my first viewing of David Lynch’s Dune, pumped with excitement to see on screen what I’d witnessed being filmed over the summer of 1983 in Mexico, admiration struggling throughout with a growing sense of disappointment. It was recently announced that, after almost 25 years of dereliction, the Met is going to be renovated as a restaurant and meeting venue by CanadInns, the company which bought it several years ago. At least it’s not being torn down, but the possibility of its revival as a movie theatre is finally over. 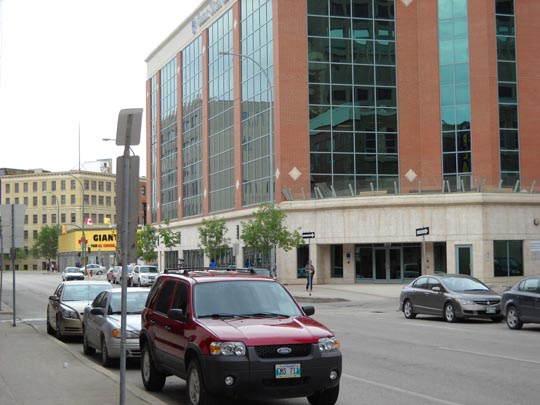 No trace left of the finest theatre Winnipeg ever had: the Capitol

A few hundred feet north of the Met, Winnipeg’s largest single-screen cinema, the Capitol, was a sleek, modern theatre, its lobby like a plush cave, its auditorium vast and long, with a big balcony section (with a total capacity of almost 2000 seats). The Capitol may have been my favourite theatre, it had such an air of modernist luxury about it. I remember standing for an hour in the freezing cold one winter morning in 1973, part of a long line-up waiting to get into the first screening of William Friedkin’s The Exorcist, one of many people anticipating the fine experience of “the greatest horror movie ever made”. The crowd had worked itself up to such a pitch that there actually were people screaming in the theatre, some even fleeing the auditorium in terror. Unfortunately all that merely increased my sense of the comedy of the film, the sheer silliness of the whole demonic possession thing. Somehow, it had worked better on the page in Blatty’s novel; on screen it was risible. Four years later I had a much better time watching Friedkin’s masterpiece, Sorcerer, in the same theatre. 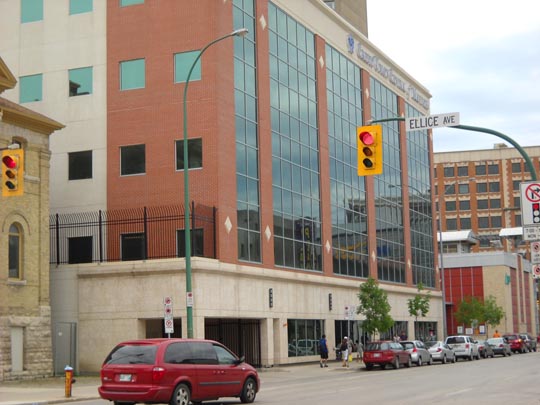 In the Capitol’s final years, Famous Players destroyed its ambiance by closing off the balcony and adding a second, small screen up there (reducing the overall capacity by almost 700 seats in the process). Apart from the fact that the architectural aesthetics of the new second auditorium were appalling and the screen itself small and distant from the seats, so you could never lose yourself in a movie, always aware of the awkward space you were sitting in (it was like watching a movie in a tunnel), you could also clearly hear the sound from the screening below. I first saw George Miller’s Mad Max up there, the American-dubbed version of course. After closing in 1990, the Capitol stood empty for years before finally being torn down to make way for an office building. 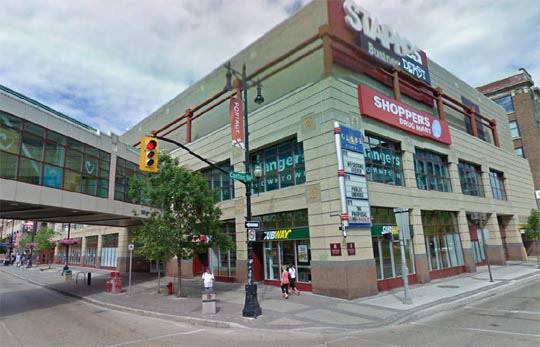 A few blocks west along Portage was the Downtown (just over 400 seats); I guess you’d call it Winnipeg’s equivalent of a grindhouse – often showing seedy, disreputable movies. This was located in the easternmost of the three blocks which were demolished to make way for the grim Portage Place mall in 1986. 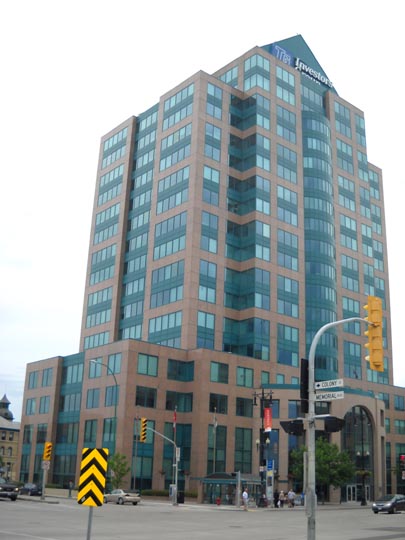 The Colony, formerly the soft-porn Eve, and before that the Gaiety … all gone

Further west there was a theatre right on the corner of Portage and Memorial, one which again went through a number of incarnations before settling down as the Colony (490 seats), which it remained until it was bulldozed to make way for a fancy office block for financial companies. Originally called the Gaiety, in the late ’70s it became the Eve, a soft-core porn theatre where I once saw a movie called Dracula Sucks. Later, when it had become the Colony, I eagerly went to see what had been advertised as Wes Craven’s Last House on the Left, but which turned out as the opening titles rolled to be something called Last House 2, seemingly some piece of dubbed Italian crap. I walked out and got a refund, only discovering much later that I’d passed up an opportunity ( the only one I’d ever have) to see a Mario Bava film in a theatre; it had been a ragged print of his black comedy Bay of Blood under one of its many alternate titles. (It wasn’t until years later and the advent of DVD that I finally got to see both Bava’s film and Craven’s Last House.)

Later still, I lined up with a lot of other people around the block to catch Kubrick’s The Shining on opening night. As I and my two friends got close to the door, an usher came out counting heads; she came close and dropped her arm in front of us, saying the theatre was full. I whined pleadingly that there must be just a little bit more room and she lifted her arm and dropped it behind us, seriously annoying the next people in line who definitely weren’t getting in. I ended up sitting in the last seat on the right of the very first row, watching the movie from a strangely distorting angle. Subsequent viewings in better circumstances haven’t improved what seems to me to be Kubrick’s worst film; he was intellectually and temperamentally wrong for horror and no matter how gorgeous the images, the film just doesn’t work for me, from the ridiculous casting of Jack Nicholson and Shelley Duvall as a completely implausible couple, through Nicholson’s obvious madness from frame one so he has nowhere to go with his performance except into self-parody, to Kubrick’s complete dismissal of King’s depiction of the Overlook’s supernatural history until a sudden and inexplicable eruption of that ghostly history in the final moments, culminating with that illogical final shot placing Jack in the old photograph, somehow implying that he himself has been a manifestation of the hotel’s sinister personality.

4 thoughts on “My movie map of Winnipeg — part one”