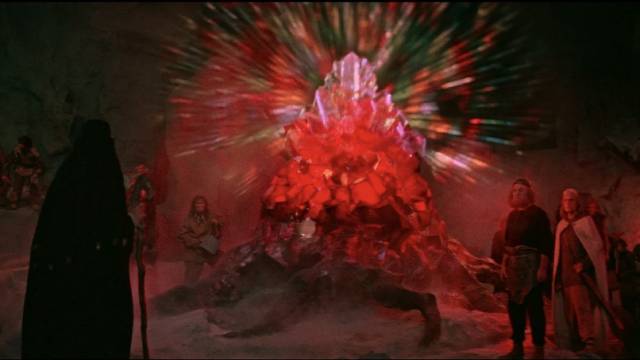 Deaf Crocodile has released two of Aleksandr Ptsuhko’s epic fantasies in gorgeous Blu-ray editions which restore the films to their original form after decades of only being available in badly-dubbed, re-edited versions. Ptushko’s practical and optical special effects create impressive worlds which blend folk tales and historical events, clashing armies and fantastic creatures, romance and sorcery.

It’s been a good year for movies on disk, with a remarkable range of releases from many companies which are devoting considerable resources to rediscovering, restoring and preserving movies in numerous genres. Ranging across nationalities and spanning cinema history, there was plenty to divert attention from a real world which has become so depressing and exhausting.

Criterion have just released Andrei Tarkovsky’s most personal Film, Mirror (Zerkalo, 1975), in an exemplary two-disk edition. The 2K restoration supplied by Mosfilm has been supplemented with four-and-a-half hours of new and archival documentaries, including a superb feature-length survey of Tarkovsky’s life and work made by his son, Andrei A. Tarkovsky, in 2019.

Criterion upgrade their bare-bones edition of Larisa Shepitko’s The Ascent (1977) with an extras-packed Blu-ray restoration of this starkly beautiful war film which moves from visceral realism into religious allegory.

Criterion’s Blu-ray edition of Elem Klimov’s searing depiction of war Come and See (1985) is a superb presentation of one of the most emotionally harrowing films ever made.

Criterion’s Blu-ray presents Andrei Tarkovsky’s masterpiece Stalker in a stunning new restoration which does full justice to its rich imagery and subtle soundscape.

Hard to Be a God (2013), the final film of Russian director Aleksei German, more than a decade in the making, is a dense, obscure, visually stunning adaptation of a novel by the Strugatsky brothers. While German’s storytelling is extremely oblique, this depiction of a brutal medieval world which eventually corrupts Earth scientists who have traveled there to study a Renaissance which failed to happen, is realized with such visceral power that the viewer becomes immersed in the filth, madness and horror, occasionally gleaning brief moments of transcendent beauty.

Andrei Konchalovsky’s Runaway Train, although an American production, has a distinctly Russian tone in its mix of action and existential allegory.