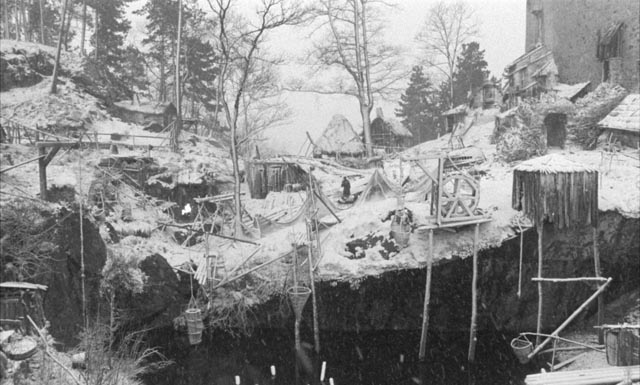 I sometimes forget what it’s like to be surprised by a film. This is probably because it happens so infrequently these days. But this kind of temporary amnesia is a blessing because it helps to magnify the surprise when it actually happens. I think surprise generally – though not always – comes from encountering the work of a filmmaker who is him(or her)self so immersed in what they are doing that it never occurs to them to make concessions to an audience. They don’t pander, and they don’t go out of their way to make it easy. These are filmmakers like, say, Terrence Malick at his best, or Theo Angelopoulos, or Andrei Tarkovsky, whose work always struck me on first viewing with the force of revelation. 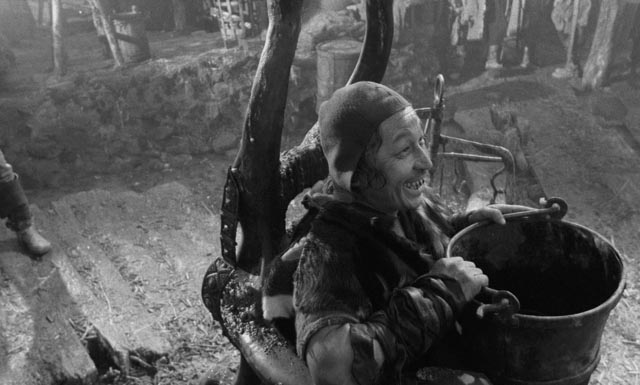 Filth, cruelty and madness permeate the kingdom of Arkanar

I often have to watch the films of these directors repeatedly before I come close to understanding what they are doing … but right from that first encounter, I know that something special is going on and even if I don’t have an immediate understanding, I’m enthralled and I’m willing to give as much time to their work as I can. The key thing is that such filmmakers open up whole worlds of meaning and emotion and ideas which I might not have been conscious of before seeing their films, but which seem after that encounter to be something always known and understood. These are films which are never “mere entertainment”; they are transformative, altering my perception of the world in which I live. The sense of surprise comes from having one’s eyes opened by the power of an artist.

It’s been a while since I’ve had that kind of experience, but then I don’t go out to movies much any more and anyway these kinds of films are often only available in cities where major festivals occur. As good as Blu-ray is as a medium, it still can’t equal the impact of watching something in a big theatre, so it’s even more unlikely to find this kind of revelatory experience at home. And yet, as I’ve just discovered, it is possible. 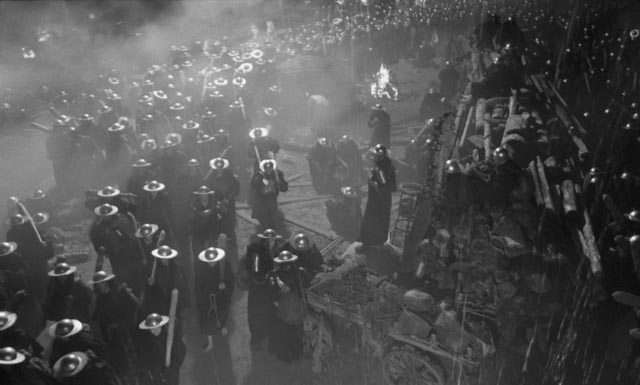 The oppressive religious, political forces of the ruling elite

Frankly, I had no prior knowledge of the Russian filmmaker Aleksei German before seeing announcements for the release of his final feature, Hard to Be a God (2013), earlier this year (by Kino Classics in the U.S. and Arrow Academy in the U.K.). The fact that this was a three-hour Russian adaptation of a novel by Boris and Arkady Strugatsky, the authors of the novel which was the source for Andrei Tarkovsky’s greatest film, Stalker (1979), was enough to make me want to see it.

Whenever I encountered a new Tarkovsky film, I would try to see it two or three times as quickly as possible (on consecutive evenings in some cases) because my first impression was often bewildering. These films would plunge me into a complete other world where I would initially have no bearings; it was the visual artistry, the evocation of mood, the sombre emotional tone which would grip me and make me want to understand more deeply. This was the effect I felt on first viewing German’s film. The world it presents is so dense, so filled with detail, that it’s like being dropped unprepared into a foreign country where one doesn’t know the language, the social mores, the nuances of behaviour. Hard to Be a God has what might be termed a very busy surface, offering so much to look at that the meaning of what is being seen is initially impossible to grasp. (As I watched, I was reminded of both Tarkovsky’s Andrei Rublev [1966] and Zulawski’s On the Silver Globe [1988], touchstones which helped me not get completely lost.) 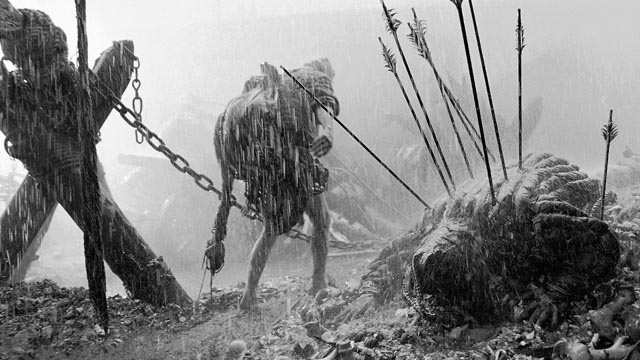 Opposition and dissent are dealt with brutally and summarily

The dialogue doesn’t offer much help, either. The characters speak in oblique fragments which the viewer overhears without a firm context – perhaps the closest parallel might be some of Robert Altman’s earlier work with its dense, overlapping voices creating a sense of multiple lives intertwined rather than any traditional narrative progression. The only orientation the viewer gets is a brief introductory voice-over which tells us that we are on a planet emerging from a period roughly parallel to our own Middle Ages; that a group of scientists from Earth have come to observe the equivalent of our Renaissance, crucially not allowed to interfere; and that a repressive political and social order has stalled the process, enforcing its rule by crushing intellectuals and artists, the remnants of this class having scattered and fled.

Having been given this background, we are tossed into a world of filth and violence and pretty much left to fend for ourselves. We see agents of the ruling order hunting down and killing what’s left of the intellectuals, this violence witnessed by Don Rumata (Leonid Yarmolnik), a man already sinking into aimless hedonism. As repression increases, Rumata is driven to madness; eventually forced to violate the imperative to remain a neutral observer, triggering a rebellion against the oppressors and a massacre. The film’s title comes from something he says at the end to the rest of the scientists, who are preparing to return to Earth; that to stand apart, detached, and merely watch the horrors of creation is too hard. And yet his final engagement with this world has reduced him to the vicious level of those he could no longer tolerate. 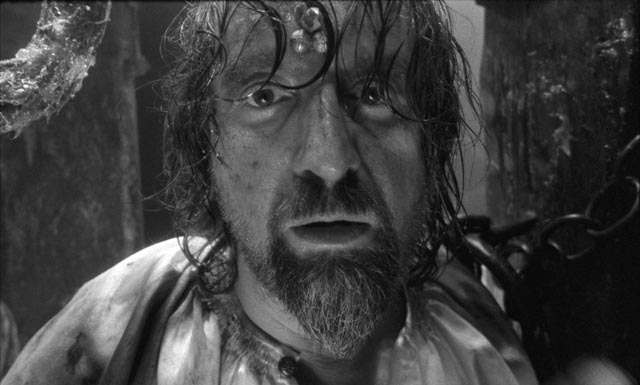 I admit that even this brief, simplified summary escaped me on that first viewing. I was too busy staring at this horrific world to understand Don Rumata’s motives. This is quite possibly the most tactile film I have ever seen, the gorgeously detailed black-and-white cinematography by Vladimir Ilyin and Yuriy Klimenko finding so many shades of silver and gray, that you feel you can touch these images – images which capture a world of mud and rain and shit and snot more graphically than even Vadim Yusov’s luminous photography for Andrei Rublev or Terry Bedford’s colour impressions of a Medieval world in Monty Python and the Holy Grail (1975) and Jabberwocky (1977). There is real tension between the visual beauty of the imagery and the harsh world being depicted; German succeeded in his aim of creating a cinematic world that the audience could smell. Understandably, this makes some viewers uncomfortable – I certainly wouldn’t want to live in this world, but it’s nonetheless a remarkable place to visit.

It’s also much bleaker than the worlds Tarkovsky created. In Andrei Rublev, Stalker, even the nearer world of Stalinist Russia evoked in Mirror (1975) with its more immediately recognizable political climate, Tarkovsky’s work always transcends the oppression of material existence by evoking a spiritual dimension which offers at least a degree of compensation for the pain of life. German’s view seems more existentially nihilistic. And yet the sheer imaginative power of his creation suggests the possibility of transcending this physical horror, in essense the survival of a spirit which can’t ever quite be destroyed by the brutal methods of those who use violence in order to maintain their own material power. 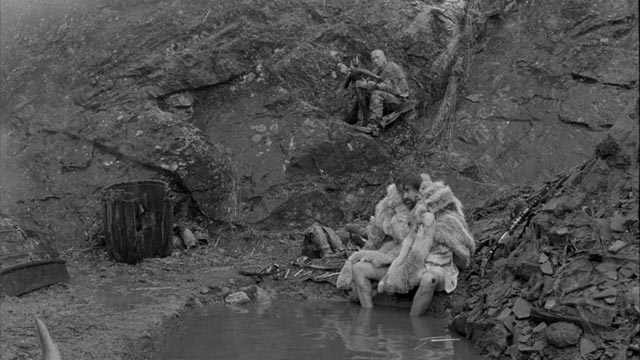 I watched Hard to Be a God a second time the following evening, less disoriented by the sheer newness of its world and better able to understand what was going on. But the truth is I “cheated” by watching the Arrow disk’s extras between viewings.

For the kind of experience I’m trying to describe here, Blu-ray can be both a blessing and a curse. It gives access to these films which would probably never play theatrically within easy reach, and of course it allows for endless repeat viewings and close study, where before I’ve been limited to chance encounters sometimes spread over many years. And yet for films like Stalker and Mirror, that drawn out process has been crucial, allowing lengthy periods of contemplation through which to internalize the film as a part of my own active memory. When I possess such a film on disk, the physical medium takes over much of the work formerly done by memory. I don’t necessarily have to retain the film “whole” because I can simply make quick reference to the disk itself.

An additional danger, particularly with companies like Criterion and Arrow, is that the supplements provided take over much of the process of interpretation. I no longer need to do the heavy lifting myself because someone else has already done it and the disk presents me with their conclusions. So even though the initial encounter with Hard to Be a God gave me that wonderful sense of revelation, of an opening of eyes I didn’t realize were closed, on my second viewing, having watched the hour-and-a-half of disk supplements, the film already seemed much more accessible, its mysteries somewhat reduced by an easier comprehension. 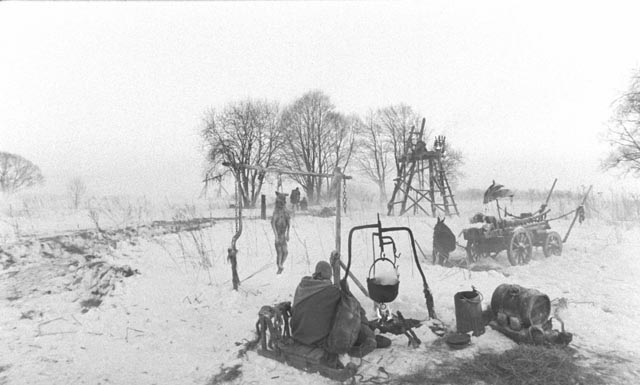 Hard to Be a God ends in a bleak winter silence

However, now that I’ve passed through this quick crash course introducing me to German’s film and the visceral world he created through more than a decade’s work (the film was actually completed by German’s son, Aleksei Jr, after his father’s death in 2013), I not only want to catch up with the filmmaker’s other features – I’ll also re-watch Hard to Be a God again soon, and probably many times over the next few years.

Arrow’s supplements include an introduction to the film by German’s wife and co-writer Svetlana Karmalita recorded at a screening (15:22); an interview with German’s son, also a filmmaker (10:01); The History of the Arkanar Massacre (an early title for the film), with disk co-producer Daniel Bird offering insights into the film and its lengthy production (28:26); Aleksei German: The Unknown Genius, in which disk co-producer Michael Brooks provides a fairly detailed survey of German’s career and the features leading up to Hard to Be a God (34:00); a trailer (1:56) and extensive photo galleries with hundreds of images from the production.

Kino’s disk apparently has different extras, so I may have to look for that at some point. But meanwhile, the Arrow Blu-ray immediately attains “prized possession” status in my collection.