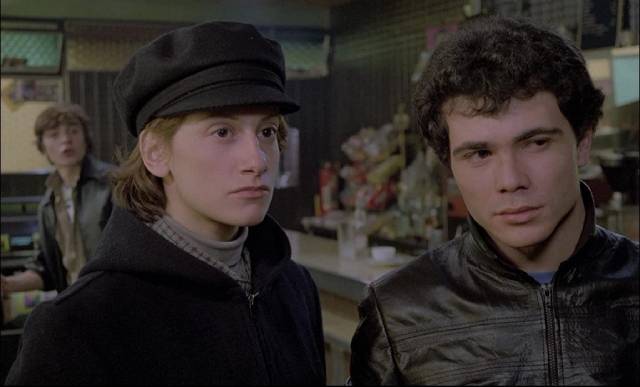 It’s been a long wait for the second pair of releases from Cauldron Films. I pre-ordered copies back in October and what with production delays and shipping problems I didn’t receive them until mid-April. With six months to work up my anticipation, the possibility of disappointment steadily increased. In the end, I wasn’t disappointed, but at the same time, watching these two movies, I didn’t get quite the same feeling of excitement that I felt with Sergio Martino’s American Rickshaw (1989) and the Onetti Brothers’s Abrakadabra (2018) last July. I guess I’m becoming more jaded all the time!

The new releases are both by directors I’m unfamiliar with, one Spanish and one Italian, both of whom have far fewer credits than typical genre/exploitation filmmakers working at the same time. One is a giallo from the genre’s peak period, the other a mix of crime and horror made during the period following Franco’s death, when Spain was redefining itself socially and politically and censorship was quickly loosening up.

The Crimes of the Black Cat (Sergio Pastore, 1972)

Made just a year after Dario Argento completed his “animal trilogy”, setting the standard for the giallo, Sergio Pastore joined the club which combined convoluted serial killer plots with animal imagery and evocative if nonsensical titles. The Crimes of the Black Cat (1972), which Pastore also co-wrote, already has the quality of pastiche, incorporating a number of elements which are familiar from other gialli. With its setting in and around a haute couture business, with models as primary victims and attention diverted by two possible killers, it more than echoes Mario Bava’s Blood and Black Lace (1964).

Model Paola Isabelle Marchall) knows too much and will soon die

As in all the best gialli, the primary investigator is an amateur – in this case a blind musician who was having an affair with the first victim. By coincidence, he overhears a mysterious conversation in a restaurant which turns out to contain crucial information about the murder – as Karl Malden’s blind crossword puzzle creator overhears a conversation which leads him into investigating murders at a research institute in Argento’s The Cat o’ Nine Tails (1971) … hmm, blind investigator? Cat? … where could Pastore have gotten his ideas from?

Pastore manages the somewhat random narrative quite efficiently, and he has a decent cast headed by spaghetti western star Anthony Steffen, stretching himself as the blind musician, Sylva Koscina as the fashion house’s designer (having just come off Roberto Bianchi Montero’s So Sweet, So Dead [1972] and going on to Mario Bava’s masterpiece Lisa and the Devil [1973] the next year), Giacomo Rossi Stuart as her business partner, and Jeanette Len as a mysterious drug addict deeply involved in the murders. Although not a top-tier giallo, lacking the audacious stylistic flourishes of the genre’s best practitioners, The Crimes of the Black Cat is entertaining and well-paced, with multiple twists before it pulls a final revelation almost out of nowhere to wrap things up. The title even turns out to have a more literal meaning than Argento’s, as a cat is actually used as a murder weapon.

Initially, the transfer is troubling with some strange visual issues during the opening title sequence, partially due to dirt and damage to the source, but also (to my eye) seemingly problematic encoding – there seems to be a layer of unmoving grain laid over the image like a filter. But this disappears as soon as the titles are finished. The image quality from then on is uneven as if different sources may have been used, but is generally quite watchable.

There are a couple of featurettes about Pastore, one an interview with his opera-singer daughter Sara, plus two commentaries – one with genre experts Troy Howarth and Nathaniel Thompson, the other an episode of the Fragments of Fear podcast. Cauldron also includes a CD of Manuel De Sica’s score. 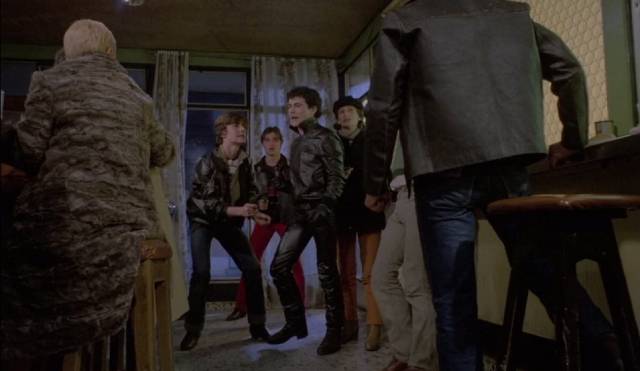 Tomas Aznar’s Beyond Terror (Mas Alla del Terror, 1980) wasn’t what I expected and that caused some slight disappointment, at least initially. Admittedly, from Cauldron’s promotion, I was expecting something trashily exploitative and it doesn’t quite deliver on that base level. There’s a supernatural element, but that’s almost treated as a throwaway; the film’s horrors are almost entirely rooted in the nihilistically violent behaviour of its main characters, a bunch of callous petty criminals who are willing to slaughter people for very little material gain.

In robbing a cafe, they casually kill most of the staff and customers simply because they feel no human connection beyond the personal relationships they have with one another – and even those are pretty tenuous; when one member of the gang is wounded, the leader has no compunctions about putting a bullet in his head. When a middle-class couple walk into the robbery in progress, the gang take them hostage and escape in the couple’s car, discovering that this pair are actually involved in an illicit affair and, ironically, passing moral judgment on them. 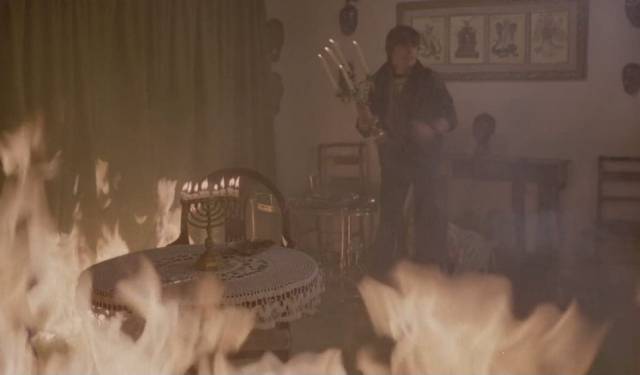 After beating the elderly owner, the gang set fire to the house

In order to avoid the police and possible roadblocks, the gang stop at a remote house where they kill a guard dog and immediately abuse the elderly woman who lives there. In a scene somewhat reminiscent of the “surprise visits” of Alex and his droogs in A Clockwork Orange (1971), they viciously express their contempt for “normal people”, beating the woman and, having discovered a young boy hiding upstairs, locking him in before setting fire to the house and leaving these people to burn alive. Up to this point, Beyond Terror is an effectively nasty crime film reminiscent of recent Italian movies like Romolo Guerrieri’s Young, Violent, Dangerous (1976), Vittorio Salerno’s Savage Three (1975) and Mario Bava’s Rabid Dogs (1974/1996). But then it takes a different direction.

Moving on, the gang find their way to an abandoned medieval church on a remote hill. With no particular plans, they hide out, argue, abuse their hostages … and die one by one because, as it turns out, the old woman was a Satanist. Even as dark forces seem to be conspiring against them, the gang remain pretty aimless. The male hostage tries to escape and ends up burning in the car. The female hostage is sexually drawn to one of the gang members, not much concerned about the loss of her lover. And the gang leader’s incestuous relationship with his violent sister is revealed. 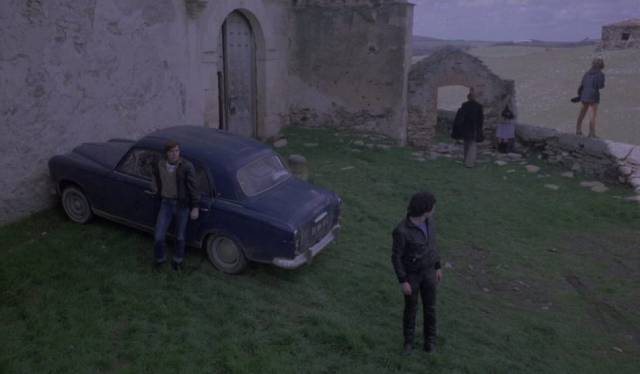 The gang take temporary refuge in an abandoned church

There’s an oddly static quality to the second half of the film as the characters wait for a violent fate to catch up with them, a fate revealed as the work of the old woman only at the end as she shows up with the boy and the guard dog, all apparently immune to death (protected by the Devil), unlike the murderous nihilists who had brutally victimized them. In keeping its focus on the gang rather than foregrounding the supernatural element, the film situates horror in human behaviour rather than dark magic, almost making the gang’s destruction something inherent, an inevitable consequence of their own antisocial behaviour rather than the old woman’s revenge.

In effect, Aznar deprives the audience of the most obvious satisfactions promised by the narrative, the simple cause and consequence of the primal revenge story. The characters at centre stage are all morally bankrupt and unsympathetic, while what ought to be the sympathetic victims are kept largely off-screen for most of the running time, and are finally revealed to be in league with the Devil to boot. 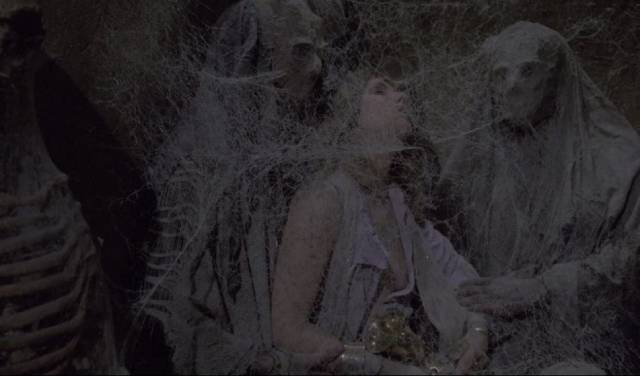 The Medieval dead awaken to deal with modern killers

Beyond Terror seems to be one of those movies which needs a second viewing to get past original misplaced expectations. Kat Ellinger, in her enthusiastic commentary, argues for looking at it from a different perspective, apparently anticipating a viewer response like mine; she also situates it in the context of the post-Franco opening up of Spanish genre filmmaking. There are no other extras, which is a bit disappointing – it would’ve been nice to have more information about Aznar, who apparently is still alive in his 80s. The transfer is stronger and more consistent than the one on the other disk.

As with their first releases, the folks at Cauldron have dug deep into the fringes of genre cinema and unearthed a pair of worthwhile if not entirely satisfying, previously unknown genre movies. And they’ve just announced their next two releases, which seem to indicate a change in direction; although they started with a focus on Euro-exploitation, which they continued with these two new movies, the announced third batch (due in August) suggest that they don’t want to be pigeonholed. I’d like to keep supporting them, but wasn’t immediately inspired to place an order for a pair of more recent found-footage horrors … though one of them does look promising – 1974: La posesión de Altair (2016) was apparently made over a period of four years by Mexican filmmaker Victor Dryere, who shot it on super-8mm film, which just by itself appeals to me. The other movie, The Collingswood Story (2002) by Mike Costanza, is a ghost story shot entirely on webcams, which is perhaps the most limiting of all found-footage gimmicks.