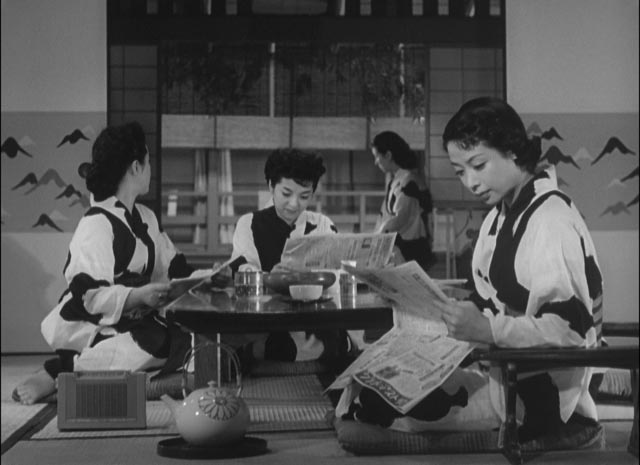 It’s always a little disconcerting at the beginning of a film by Ozu Yasujiro. The stark simplicity of the visual style – camera usually static, set close to the floor, looking slightly up at the actors; a casual disregard for the sacred axis, so that actors may seem to be looking the wrong way; even more unsettling, having the actors look and speak directly into the lens, making eye contact with the audience, putting us in the physical position of the character being addressed – this all goes against the grain of the classical Hollywood “invisible” style and at first seems slightly alienating. But strangely, after a little while, you realize (or rather, I realize) that Ozu has somehow absorbed the viewer into the visual space of the narrative … without overt dramatic gestures or visual tricks, he has established an intimacy which dissolves any emotional distance between audience and characters. We become completely invested in the lives we see on screen, alert to the smallest gesture or change in expression.

I experienced this effect once again while watching Criterion’s new Blu-ray of Ozu’s The Flavor of Green Tea Over Rice (1952), a film I was previously unfamiliar with. Made between Early Summer (1951) and Tokyo Story (1953), it shares themes with them which revolve around Middle Class life in a society undergoing major upheavals in the post-war years, in this case just as the Allied Occupation was officially ending (although these larger political issues aren’t overtly mentioned). After decades under militarized rule which had enforced a conservatism rooted in traditional feudal culture, a previously suppressed attraction to western-style modernism – particularly to a popular culture which emphasized personal independence and freedom – was causing rifts in family and work life. 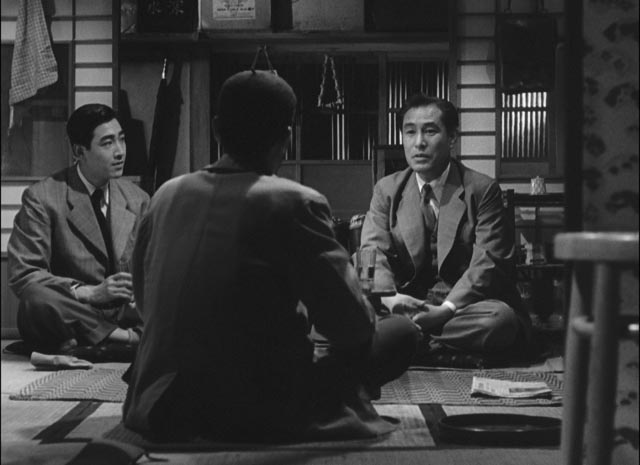 These rifts are at the heart of The Flavor of Green Tea Over Rice, described as a (satirical) comedy by David Bordwell in an interview on the disk and by scholar Junji Yoshida in his booklet essay. But while there is humour in the film, the overriding tone is one of deep melancholy. It’s the story of a marriage in which a husband and wife are unable to communicate with or even understand one another.

Mokichi Satake (Shin Saburi) is a salaryman from the provinces in an arranged marriage with Taeko (Michio Kogure), a woman from a higher class in Tokyo. Thanks to the post-war economic boom, Mokichi has a successful career at an engineering company, but in order to maintain his position is always taking his work home and keeping busy in his quarters. Taeko spends her time shopping and socializing with her friends, who like her seem to hold their husbands in contempt (Taeko calls Mokichi Mr. Bonehead). 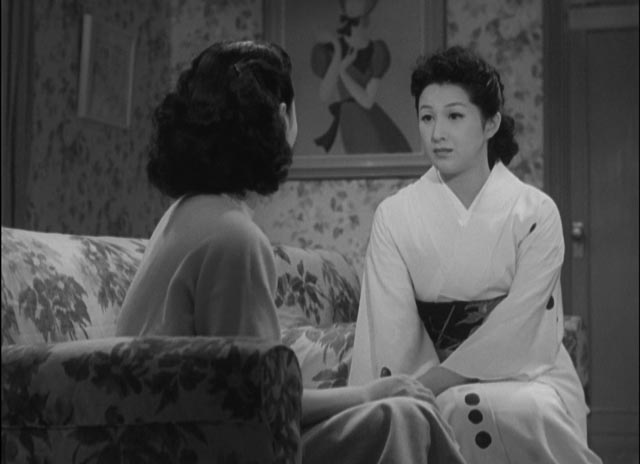 The genders seem to live completely separate lives. In fact, when Mokichi and Taeko are together, there seems to be little more than friction and irritation between them. She criticizes the way he eats – pouring miso soup over his rice and making slurping sounds, the behaviour of the unsophisticated lower classes. After Taeko leaves the table in disgust, Mokichi asks the maid Fumi (Yoko Kosono) how they eat where she comes from, and she says they also pour their soup over rice … he has more in common with their servant than with his wife.

Perhaps not surprisingly, the lack of mutual understanding leads them both to lie to each other rather than express their wants and needs openly. Taeko, wanting to get away with friends to a spa, cooks up a story that she has to leave town because her niece Setsuko (Keiko Tshushima) has taken ill. Mokichi doesn’t want to go away for a weekend golfing, so he gives his friend a pre-written postcard addressed to Taeko to be sent from the resort, while he stays with his young protege Non-chan (Koji Tsuruta), a young man just beginning his career for whom Mokichi has vouched with his employer. Both Mokichi and Taeko are relaxed and happy in the company of friends, yet closed and defensive with each other. 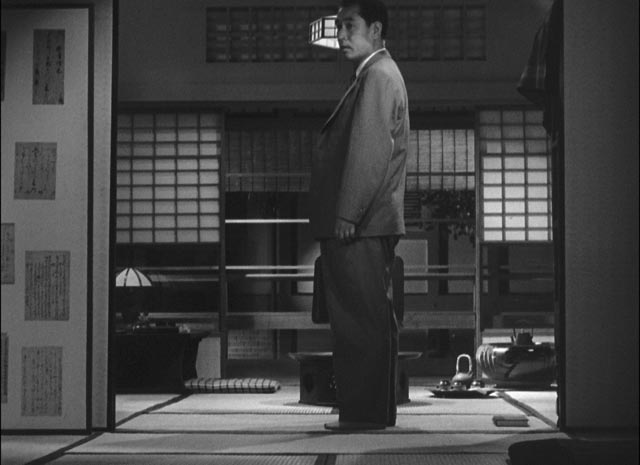 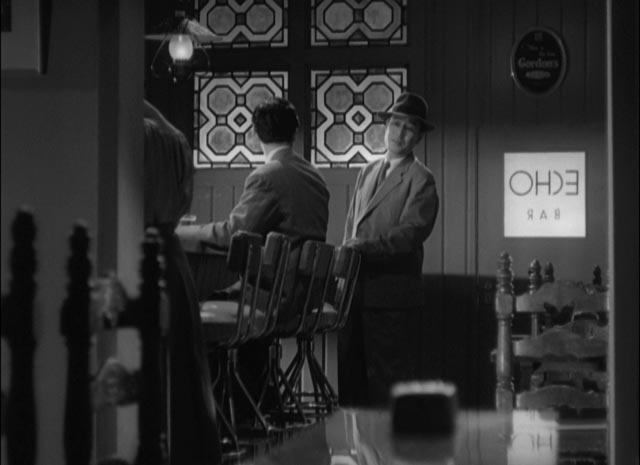 Apart from the friction when they’re together, Mokichi and Taeko are apparently satisfied with their lives, married and childless and occupied with their own separate interests. Interestingly, Ozu complicates what seems like a dichotomy between traditional (Taeko) and modern (Mokichi) through production design: Mokichi’s domestic space is traditional, with tatami mats and a futon to sleep on, while Taeko’s separate quarters are filled with western-style furniture, reflecting a new standard of luxury and status.

This firmly established life is disrupted when Setsuko comes to visit. She’s a modern young woman, outspoken about her disdain for traditions well past their time – in particular, the idea of arranged marriages, very pertinent because Setsuko’s mother Chizu (Kuniko Miyake) has set up a meeting with a prospective husband for her. Setsuko bucks protocol by ducking out of the meeting and following Mokichi, who is out relaxing with Non-chan. She leaves tradition behind and inserts herself into masculine space – playing pachinko and, after refusing to return home with Mokichi, joining Non-chan for a late night snack of ramen. As they eat the simple meal, they banter about the validity of arranged marriages versus self-made matches based on personal feelings … there can be no doubt where their casual acquaintance will eventually lead, but before that can happen, the marital conflicts between Mokichi and Taeko will have to be resolved. 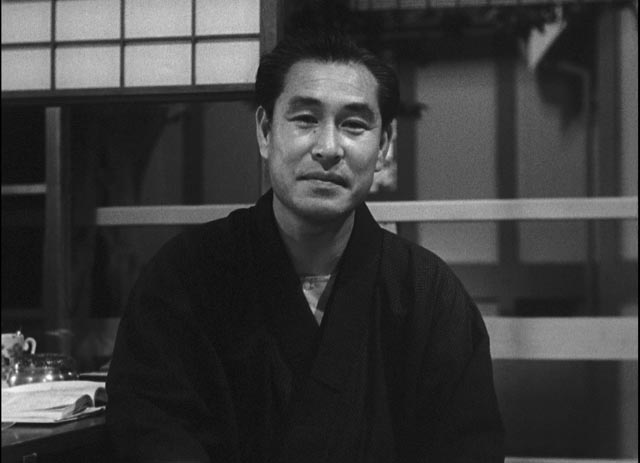 Setsuko’s rebelliousness brings those conflicts out into the open, seeming to put an end to the long-standing peace between the couple. Mokichi comes right out and defends Setsuko by pointing out that forcing her into an arranged marriage will only result in another couple like themselves. When Taeko goes away without saying anything and Mokichi is sent overseas by his boss, she doesn’t respond to his telegram urgently asking her to come back. She only returns after his flight has left … but Fate steps in and gives his plane mechanical problems, returning him home several hours later.

Wary of each other, with Mokichi scheduled to fly out again in the morning, rather than address their problems directly, they decide to have a late night snack. Here Ozu displays his full mastery in a lengthy sequence which mixes social comedy, obliquely expressed emotions, and a deep sympathy for flawed characters who nonetheless deserve the audience’s affection and understanding. 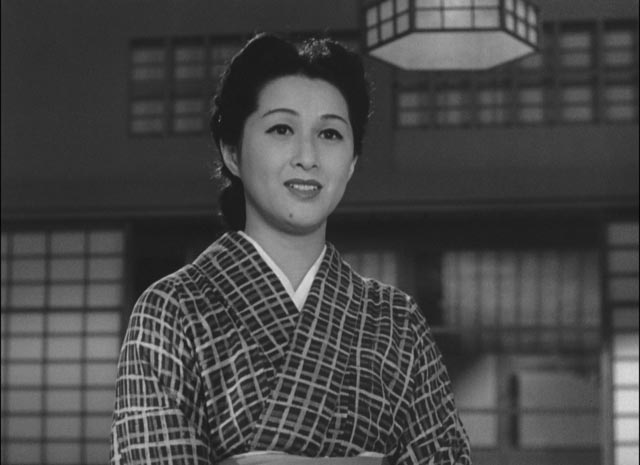 Not wanting to disturb Fumi, the couple sneak into the kitchen – quite obviously an alien space for them – and fumble their way through preparation of a simple meal assembled from scraps they manage to find … in fact the meal referred to in the film’s title, a humble bowl of rice with pickled vegetables. Mokichi pours green tea over the rice, something Taeko would never have countenanced before, and she finally responds to the simple pleasures which he enjoys but which she has previously held in contempt. This quiet sequence runs for some twelve minutes of seemingly inconsequential action, yet when it’s over, Taeko and Mokichi have a new understanding of one another and have become aware of deeply held feelings which were masked by the imposed relationship of an arranged marriage.

With this marriage healed, the film ends with a light and playful moment between Setsuko and Non-chan, suggesting that in the new post-war Japan, a man and a woman making their own choices can begin their relationship with the love and understanding it has taken Mokichi and Taeko years to find. 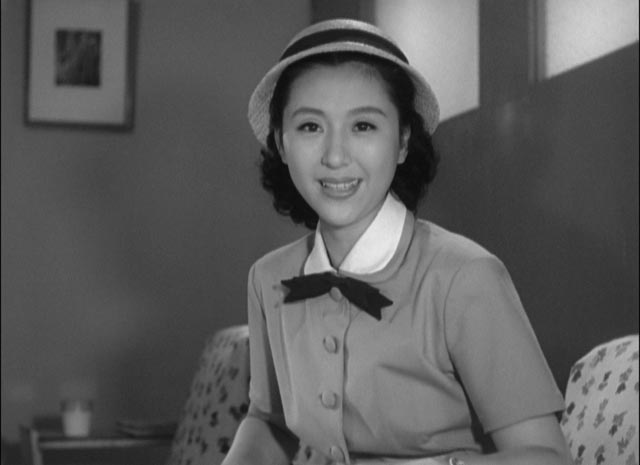 Criterion’s Blu-ray has been mastered from Shochiku’s new 4K restoration from a fine-grain positive. There is some print damage, but contrast and detail are excellent, and the audio is clear.

Most interestingly, Criterion includes Ozu’s 1937 feature What Did the Lady Forget?, which in many ways is a trial run for The Flavor of Green Tea Over Rice, although the narrative is less fully developed, with fewer thematic layers (the marriage isn’t complicated by class differences, for instance) and the resolution of the couple’s conflicts is more crudely handled (the husband gains his wife’s respect by hitting her).

The booklet essay is by Japanese film scholar Junji Yoshida.