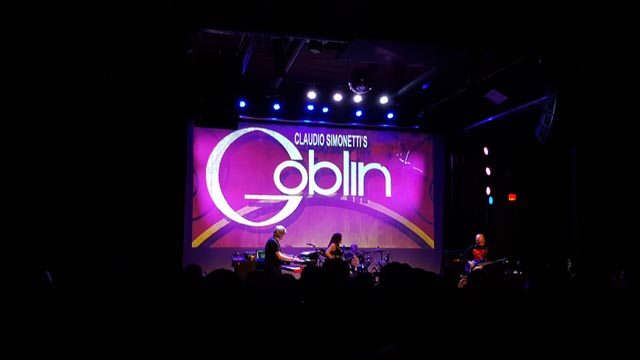 I’ve never been much of a concert-goer. Although I like the idea of seeing and hearing favourite performers live, the experience as often as not ends up irritating me … mostly because of the other people in attendance. I have had some great experiences: I went to all three of John Cale’s shows here in Winnipeg in the 1990s – each one better than the last (I actually have my own bootleg recording of the first show, incongruously performed one Sunday evening on the Main Stage at the Manitoba Theatre Centre), climaxing with an amazingly energetic set at the West End Cultural Centre with Cale and Chris Spedding. I saw both Philip Glass and Laurie Anderson live in Toronto in 1999, and Leonard Cohen live here in 2012 was a transcendent experience.

But more recently, I’ve been at shows where I’m not sure what the rest of the audience was there for. When Lucinda Williams played here, I was constantly distracted by people wandering in and out of the theatre to go get refills at the bar in the lobby. Buying drinks seemed to take precedence over paying attention to a great performer up there on stage. 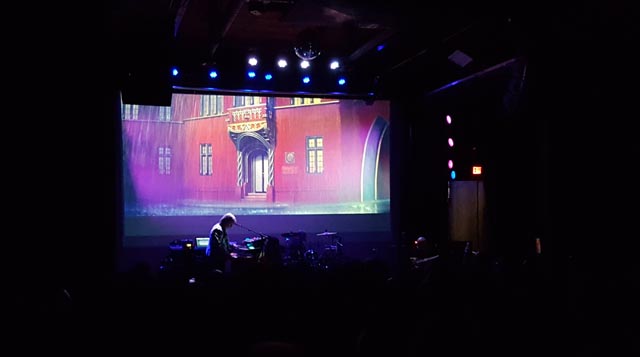 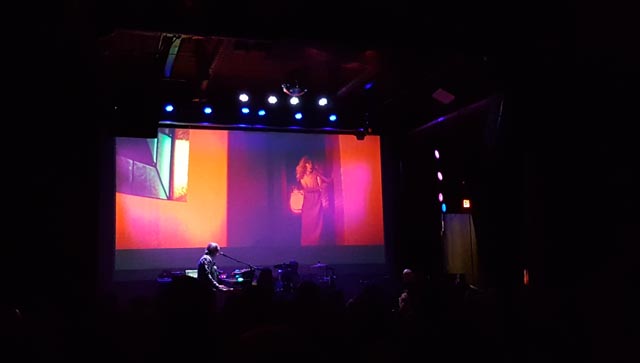 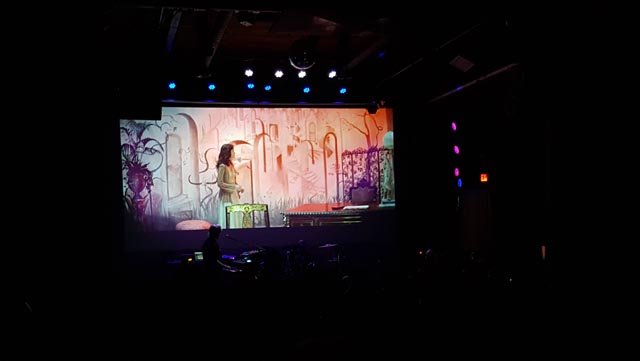 But despite this feeling that all-too-often audiences are not there to pay full attention to the performance, but rather for some kind of social interaction with other ticket buyers, I do have regrets that I passed up some opportunities over the years. Probably the biggest was not making the effort to see Nico live in London in 1984. That was the only opportunity I was likely to have, and she died four years later. (My only real excuse was that it was a Sunday evening and there were labour disruptions in London Transport which would have made it a chore to get into the West End from where I was staying in north London.)

This tension between regret at lost opportunities and anticipated irritation came up again recently when a friend sent me a link promoting the North American tour of Claudio Simonetti and the latest incarnation of Goblin, which was due to end at the Park Theatre in Winnipeg on December 10. It was to entail a live performance of the full score to Dario Argento’s Suspiria (1977), a key work in Goblin’s catalogue. Once again, it was obvious this would be a once-only opportunity, so I didn’t hesitate to buy a ticket and my friend and I drove to the Park on a chilly evening, not quite sure what we would be in for. 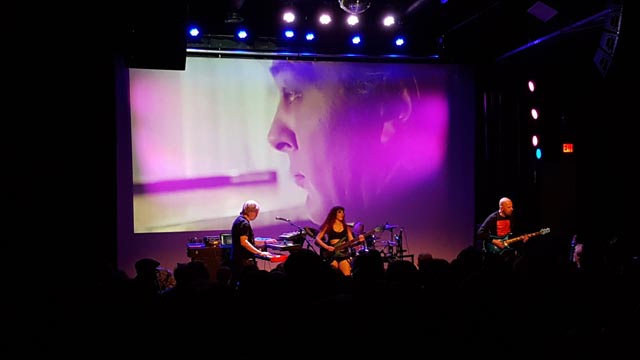 The first clue was the prominent signage saying that this was a “standing only” show. The Park is not a big venue, and there are only a few seats along the side walls towards the back; the rest is just open space slanting down towards the stage. The lobby was already filling up, with brisk business at the bar. The doors opened half an hour late and my friend and I sat to one side as the crowd gradually filtered in, filling the theatre. It was obvious that we’d also have to stand once the show began, but we held off as long as we could – I wasn’t thrilled at the prospect of standing for a couple of hours at the end of a work day.

Time dragged on and the crowd became ridiculously dense (good thing fire inspectors didn’t stop by as it probably eventually reached double the legal capacity), with people constantly pushing their way back out to revisit the bar, returning with precariously full plastic beer cups. By the time the lights dimmed at 8:30, we’d already been there an hour and half and I was feeling edgy and a little claustrophobic – not to mention nervous about those drinks; eventually part way through the show someone did bump into me on his way back in, spilling part of his drink down my arm. When I commented, he turned back and tried to start an argument with me. 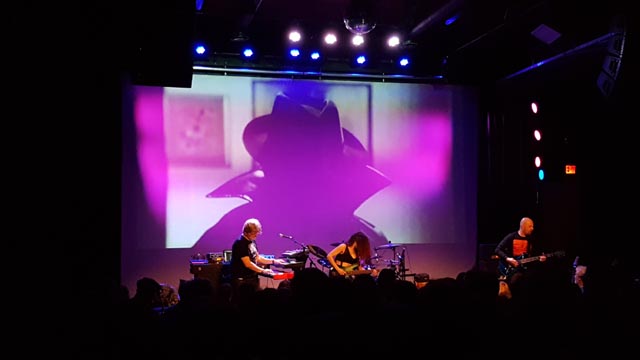 The quintessential giallo image: the killer as an ominous, abstract figure in Deep Red

So the first part of the show was fighting against my irritation. It didn’t help that this was undeniably the absolute worst way to see Suspiria. The weak image projected behind the band was drained of most of the film’s intense colour, and the long stretches without music provoked quite a few people in the audience to laugh at the movie (yes, there is a lot of clunky dialogue, but under more normal viewing conditions the rich atmosphere cancels out the awkwardness). It was obvious that a lot of people were treating the film as camp while nonetheless being fully responsive to the music when it was being played.

The most interesting part of the screening, with the music somewhat separated from the image because it was being performed (loudly) by musicians in front of the screen, was getting a sense of the part Goblin’s score plays in the overall impact of Suspiria. Despite Luciano Tovoli’s lush Technicolor photography and the expressive camerawork, the palpable sense of the supernatural which permeates the film is very much due to the score, which is aggressive and other-worldly. The musical soundscape adds depth and dramatic resonance to what is, in truth, a pretty simple narrative. 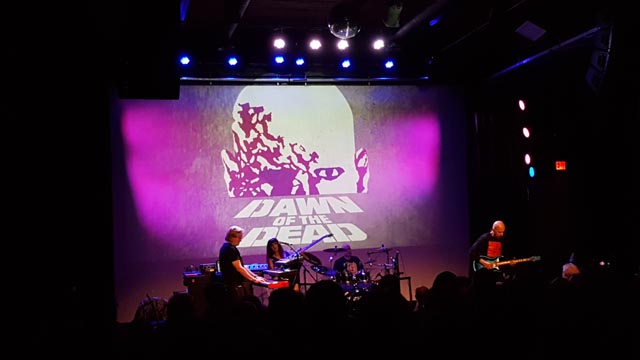 Claudio Simonetti’s Goblin perform a thunderous main theme from George A. Romero’s Dawn of the Dead (1978)

When the movie finally ended just after 10:00, a lot of people started leaving … and the whole experience changed. Simonetti, Titta Tani, Bruno Previtali and Silvia Specchio launched into what I thought was going to be an encore, but turned out to be an hour-plus concert covering most of the major Goblin soundtracks with montages from the movies projected on the screen. Can’t believe so many people were walking out as this started; it turned out to be the high-point of the evening, with the band blasting out tracks from Argento’s Mother of Tears, Tenebrae, Phenomena, Sleepless and Deep Red plus Lamberto Bava’s Demons and George A. Romero’s Dawn of the Dead. The main theme of the latter, played with bone-crushing intensity, was for me the evening’s peak experience.

In retrospect, it would probably have been a more satisfying evening if the band had played the Suspiria score as a suite backed by images from the movie, rather than against the entire film, but the last hour swept away any minor caveats and I’m glad I made the effort to go.

Simonetti obviously enjoyed himself too; he posted on his Facebook page the day after the concert that it was a great show and a great ending for the tour.