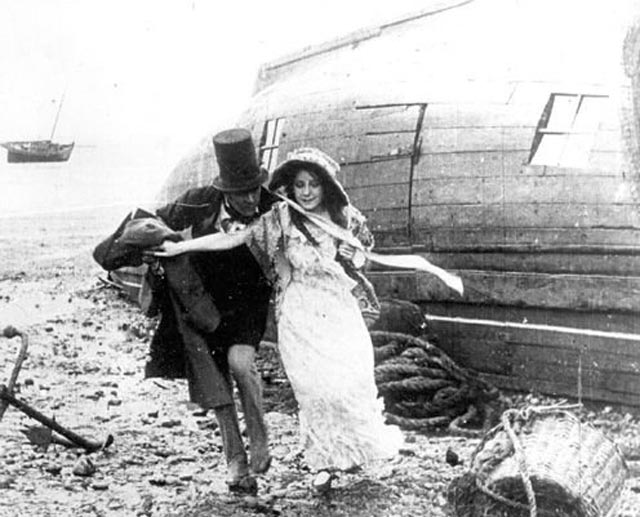 A few months ago, I mentioned that I’d bought a used copy of Rachel Low’s four-volume History of the British Film 1896-1929 at a small bookshop in Stroud, England. I’ve now read the first two volumes (1896-1906, 1906-1914) and it turns out it was well-worth picking up. Based on research conducted by the British Film Institute History Committee, these books pack an enormous amount of information into each volume and while there has subsequently been a great deal more research and analysis, Low’s work has a particular quality which is unlike anything I’ve read on the subject. Written just fifty years after the birth of cinema, these books capture the feeling of ad hoc invention which received wisdom has now somewhat concealed with a sense of inevitability, the settled idea that the technical, business and artistic practice of cinema has had a clear and steady evolution.

Initially rooted in various 19th Century media which blended photography and performance (particularly magic lantern shows and popular stage melodrama, music and comedy), the movies were almost a by-product of engineers and inventors solving the technical problems of creating an illusion of movement through sequential photography. In the early years, public showings were as much a demonstration of the technology as a form of entertainment. While the earliest movies were “actualities”, merely a visual record of some event or sight, these inventors were quick to explore the possibilities of fooling the viewer’s eye – trick photography, composite imagery, even the early exploration of editing (stopping and starting a static camera to create abrupt changes in the image, as in creating the instant transformation of one object or person into another). The idea that “photographs don’t lie” was up-ended almost immediately.

Rachel Low tracks the various explorers of this technology in Britain along with the appearance (and often quick disappearance) of the numerous companies which built the equipment, and others which arose to put the resulting movies in front of the public. It took a long time for what we now think of as the inevitable relationship between production and distribution to evolve. In the early days, producers (or manufacturers) sold prints outright to showmen who either used the movies to supplement live shows or set up (often transient) picture shows. These movies were sold by the foot, often resold to other exhibitors, and frequently played until they disintegrated. Popular films, like the Hepworth company’s Rescued by Rover (1905), would be remade over and over again as prints and negatives deteriorated beyond usability. 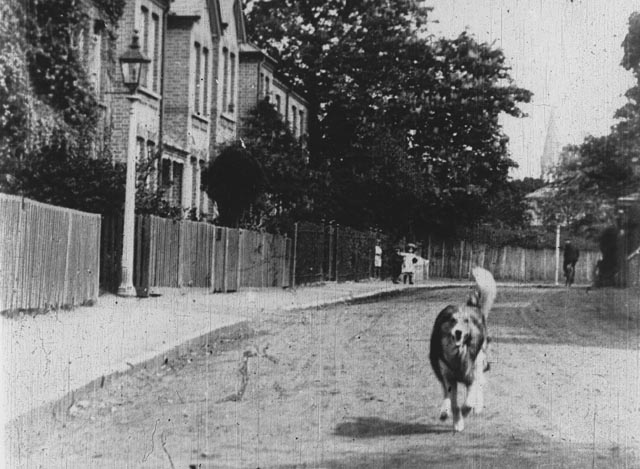 The star of Hepworth’s big success, Rescued by Rover (1905)

Of the many intricate, interlocking narrative threads in Low’s account, one of the most interesting involves the long and acrimonious struggles among various players over distribution models. While the structures of distribution with which we are familiar now seem logical and, indeed, inevitable – certain corporations produce movies, which they then license to other corporations which run theatre chains, or own cable channels or streaming services, while other companies acquire the productions of independent filmmakers and make deals to have them play on these various platforms – in the early years of cinema, numerous different models were tried out.

Initially, those who made movies were considered – and called – manufacturers, not producers or directors or filmmakers; and what they made was deemed an industrial product, literally sold to exhibitors at a price-per-foot. As it became apparent that the movies were more than just a passing curiosity and productions became larger and more elaborate, the three main components of the business – manufacturers, agencies and exhibitors – formed and dissolved and reformed various associations with the intention of maximizing their own profits at the expense of the others. As productions became bigger and more expensive, manufacturers began to charge premiums for “specials”, higher rates per foot.

But the innate limitations involved in selling their products outright pushed them to start renting rather than selling prints, a practice which angered exhibitors who felt that what they paid for should be theirs to do with whatever they wanted – which meant exploiting films for the maximum profit and then selling the worn out prints to third parties. Briefly, one of the most extreme methods of distribution was the limited release, with films put into certain markets for a specified time, then recalled and destroyed (negatives as well as prints), the idea being that interest could be ramped up for that period, spurring higher profits and greater immediate return on investment.

Parallel to these developments, there were social concerns about this new form of diversion. The concern of the manufacturers was a mixture of technological invention and profit-making; the exhibitors, who served as the channel by which the product was experienced by audiences, were mostly concerned with commerce – how to maximize income from the products they bought (and eventually rented). But they were also the ones most exposed to social and political concerns about the impact of movies on the public. Those concerns largely arose because the greater part of the movie-going public was “lower class”. There was an air of disreputability about the new industry and increasing efforts were made in the early years of cinema to appeal to a more affluent and “respectable” clientele, which in turn began the trend of moving beyond coarse humour and mere sensation by adapting literary and stage classics to the screen, with the hope that some of the prestige would rub off on the new medium. 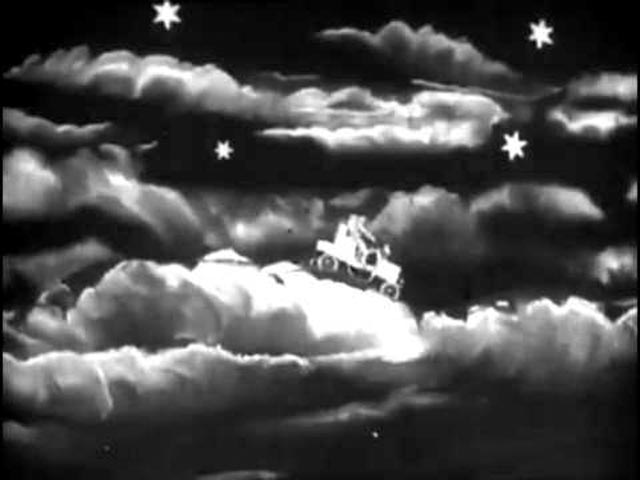 While this trend pushed the development of increasing sophistication, it also exposed the new medium’s limitations – simple photographed records of stage hits, with the camera fixed to observe the stage proscenium, might provide a crude record of then current stars of the theatre, but they took little or no advantage of the distinctive qualities of film. Yet the need to capture such dramas on film pushed the development of the medium by encouraging the more innovative producers to start using the camera in creative ways (varying angles and distance from the action, which in turn necessitated the development of editing techniques to combine the different shots, which again in turn encouraged more innovative camerawork).

Along with all these developments, there was tension between those who saw the movies as a way to make money by attracting an audience looking for nothing but diversion and others who saw the new medium as a potentially powerful educational tool. Certain companies would send their cameramen (it was mostly men at the time) to remote parts of the world to bring back images of far-flung wonders and exotic sights; these travelogues provided audiences with experiences not possible in the normal run of life. The same applied to war reportage, with both reconstructions of famous events and actual newsreel footage of combat proving popular, as well as the early development of science and nature photography.

Low’s account evokes the chaos and excitement which attended the early days of cinema, the technical, business and creative experiments which gradually gave shape to what we now understand as cinema. There’s an exciting immediacy to her writing because much of it is rooted in research which had been drawn directly from people involved these events.

Beyond her account of this chaotic invention of a new kind of industrial art, she also devotes space to an analysis of representative films, tracing the many different directions pursued on the way towards what eventually emerged as the cinema as we know it. In her first volume, these are broken down into multiple categories – Actualities, Interest Films, Topical Films, Panoramic Films and Travelogues, Vaudeville, Trick Films, Comedy and Drama. In the second volume, these have coalesced into three primary divisions, which more closely resemble the way we now think of the movies – Factual Films (what we now call documentaries), Humorous Films, Dramatic Films. To illustrate the extent of the development of film technique in this “second period” (1906-1914), she looks in detail at three particular dramas: a record of a stage production of Shakespeare’s Richard III (1911), an adaptation of Mrs. Henry Wood’s melodramatic Victorian novel East Lynne (1913), and an adaptation of Dickens’ David Copperfield (1913). Through these she explores the development of such techniques as subjective camera and its ability to convey character point-of-view, and the expressive use of imagery which goes beyond merely recording the action to comment on it, emotionally and thematically. 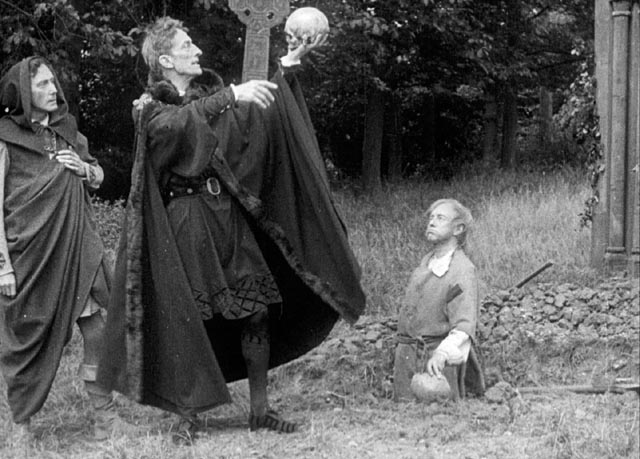 The graveyard scene from a 1913 adaptation of Hamlet

Perhaps the biggest surprise (for me, and this no doubt highlights my own inadequate knowledge of film history) is Low’s account of the early development of colour and sound. In 1906, Charles Urban and G.A Smith patented a genuine colour system, Kinemacolor – not the various tinting and hand colouring techniques we’re familiar with, but a two-colour system suggesting an early development of something like two-strip Technicolor. Perhaps not surprisingly, this innovation was killed within five years by patent litigation (something which plagued the industry virtually worldwide during the early decades of cinema).

In addition to colour, various methods of presenting synchronized sound were tried between 1904 and the beginning of World War One, most involving the use of disks which were played alongside the movies by means of a player linked to the projector. At this time there were a number of inherent technical limitations – any break in a film print would throw the sound out of sync; the machinery used to project the sound in a larger theatrical space was often inadequate. In addition, the limitations imposed by editing the picture meant that synchronizing dramas was all-but-impossible, so sound was mostly used for the recording of vaudeville turns, static filmed records of songs and skits. Interestingly, machines were also developed which, installed in movie houses, could add various sound effects during projection.

When sound finally emerged as a viable element of the movies in the late ’20s, the use of synchronized disks was initially used; it was only with the development of sound-on-film that Talkies truly became inevitable.

Low’s volumes on the evolution of British film are thorough and surprisingly comprehensive. Reading them inspires a sense of excitement and immediacy which many later, more academic texts lack.