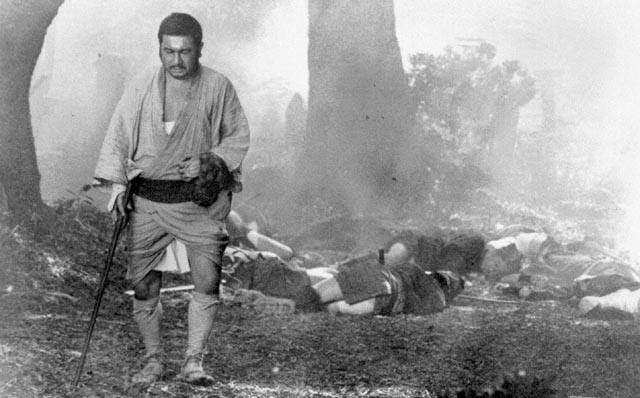 I’ve been a fan of Shintaro Katsu’s series of films about Zatoichi, the blind swordsman, since I came across Home Vision Entertainment’s DVD editions of the first two, The Tale of Zatoichi and The Tale of Zatoichi Continues (both 1962) many years ago in the video department of Winnipeg’s long-gone A&B Sound. I was grabbed immediately, not just by the fascinating character – a quiet, unassuming blind masseur wandering the backroads of feudal Japan, who beneath the surface is a wily gambler and perhaps the deadliest and most skillful swordsman in the land (his wooden came conceals a very sharp blade). The films were also beautifully crafted although obviously modestly budgeted, with striking widescreen black-and-white cinematography, interesting supporting casts, and superbly staged action sequences. While on the surface the idea of the blind man taking on and defeating crowds of attackers seems ridiculous, Katsu’s subtle performance and the staging and editing of the fights were exhilaratingly convincing.

As further titles were released, I bought them all. Not surprisingly given the history of the series – initially produced by Daiei, later by Katsu’s own production company, then with the involvement of Toho – the disks also had multiple distributors: HVE, AnimEigo, MediaBlasters. There were 25 movies made between 1962 and 1973, with a final elegiac release directed by Katsu himself in 1989, along with 100 TV episodes between 1974 and 1979. I’ve only seen a few of the TV shows, but I’ve watched all 25 of the features released on disk – generally preferring the Daiei titles, as the more expensive Toho releases seem to lose a little of the special flavour of the earlier films, becoming both more opulent and more generic.

Naturally, in a series like this, storylines and characters tend towards repetition to the point where they become almost ritualistic – Zatoichi arrives in a town plagued by rival gangs, becomes involved with an innocent villager whose life is in peril, plays the bad guys off against each other while appearing utterly harmless himself, and at the climax faces down the massed forces of villainy and destroys them before moving on again down the road. And yet the character and the nuances of the situations keep the films fresh and engaging.

So it was exciting to see that Criterion is planning to release a dual-format (Blu-ray/DVD) edition of the entire series of features in November. But then I noticed that there were only 25 titles in the set and felt disappointed that apparently even Criterion hadn’t been able to obtain the rights to the 14th film, Zatoichi’s Pilgrimage (1966), long missing in action because the Weinsteins had bought it up years ago when Quentin Tarantino had expressed an interest in doing a remake (though why he couldn’t have come up with an original story for the character is a mystery) and suppressed a DVD release. It turns out, though, that Criterion’s set will contain that title after all – for some reason, they’ve chosen not to include the final 1989 feature.

So the set isn’t quite the complete Zatoichi, which is a disappointment, but it looks like I’ll be forced to buy it because of the belated opportunity to finally see the long absent Pilgrimage.