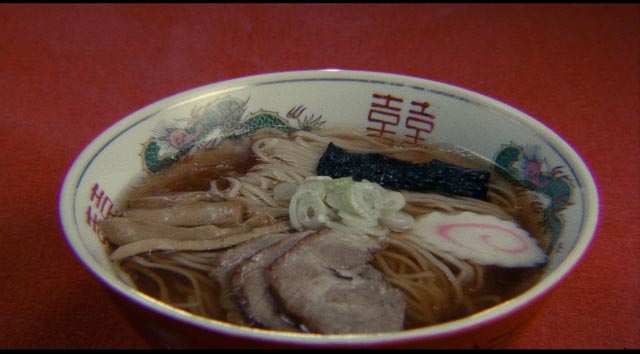 The perfect bowl of ramen: the grail sought in Juzo Itami’s Tampopo (1985)

At some point in human social development, food becomes more than mere sustenance. Or, as the character Will Cole says in Gordon Pinsent’s The Rowdyman (1972), “There’s more to Epicureanism than a good meal.” Once basic needs are met, our physical experiences take on emotional, aesthetic and even moral shadings. Life as a form of art. And not surprisingly, food comes to form an epicentre of pleasure into which all manner of meanings are invested. Food, which at its base is essential for our physical survival, becomes entwined with other physical pleasures – as a component of or substitute for sex, for instance – but also because it is so essential to survival, it becomes entwined with thoughts of mortality. In Marco Ferreri’s La Grande Bouffe (1973), a group of aging bourgeois hedonists lock themselves in a chateau and eat themselves to death; in Pier Paolo Pasolini’s Salo (1975), eating and excretion are inextricably linked with sexual torture and murder; and let’s not forget the fate of Mr. Creosote in Monty Python’s The Meaning of Life (1983).

But while these films suggest a kind of Medieval memento mori, confronting their audiences with the inevitability of death, there are other films in which food becomes a sign not just of life, but of the sheer pleasure of being alive – among the greatest of these are Gabriel Axel’s Babette’s Feast (1987) and Brad Bird’s Ratatouille (2007) – while Campbell Scott and Stanley Tucci’s Big Night (1996) conflates the pleasures of food with economic survival and Tony Richardson’s Tom Jones (1963) famously uses a meal as a blatant stand-in for the explicit depiction of sex. But perhaps only one film manages to combine all of these facets of our complex relationship with food, and it does so by also combining disparate genres drawn from different cultural contexts. 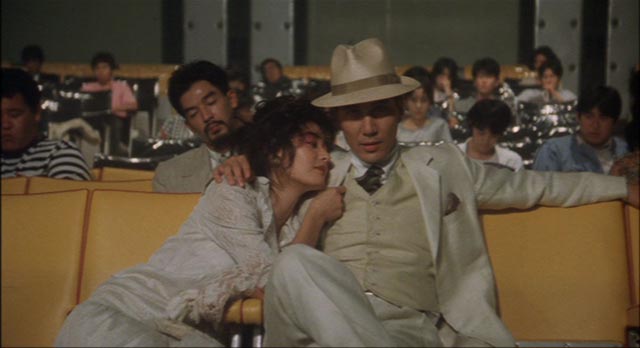 Juzo Itami’s second feature, Tampopo (1985), is a comedy so prodigiously loaded with ideas that it’s either surprising or inevitable that it became an international hit. The film begins in a movie theatre, the camera tracking back as a man and woman dressed in white come down the aisle to the front row, accompanied by servants who bring a table, trays of food and bottles of wine, and set them up in front of the couple. The man, perhaps a yakuza (Kôji Yakusho), notices us, Tampopo’s audience, looking at him and he approaches the camera to talk to us. He goes on a bit of a rant about the low class of filmgoer who makes a lot of noise opening bags of chips and crunching them – at which point a man in the row behind him does just that, triggering a threatening outburst. The man in white then mentions the idea that at the moment of death we are supposed to see a short movie which encapsulates our whole life. He hopes that there will be nothing sentimental about his movie and he looks forward to seeing it. Then the house lights go down and the movie begins.

Under a rousing orchestral fanfare, the opening titles play over moody, noirish images of a tanker truck driving through a night of heavy rain, two men in the cab, the driver Gorô (Tsutomu Yamazaki) and his helper Gun (Ken Watanabe). These images set up certain expectations of doom-laden romance … but after Itami’s director credit, there is an abrupt cut to an aerial view of a city in bright sunlight and a voice begins narrating a young man’s experience of being tutored in the correct way to eat ramen. This leads to a wonderful scene in a noodle shop in which an elderly man (Ryûtarô Ôtomo) expounds on the spiritual and philosophical relationship between the diner and his lunch. 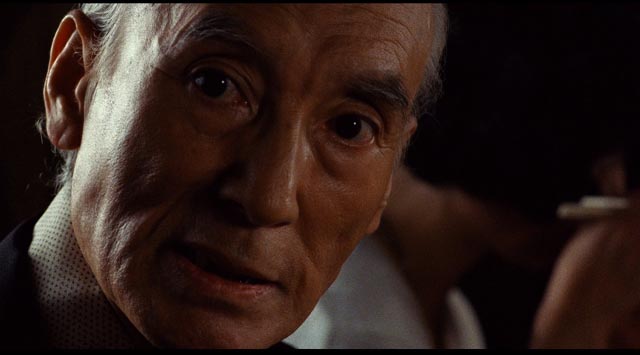 This scene in turn is revealed to be an account being read in the truck by Gun, who declares it nonsense. But the reading has stirred Gorô’s appetite and he pulls off the road beside a small noodle shop. On the way in, these men pass a small boy being beaten in the rain by three others, whom they chase off. This boy is Tabo (played by the director’s son), whose mother owns the noodle shop.

With Gorô and Gun’s entry into the shop, Itami introduces the final major stylistic reference of the film – the Western. Here two strangers step into the equivalent of a western saloon populated by potentially menacing outlaw types, the gang who surround the boorish Pisuken (Rikiya Yasuoka), who is aggressively pressuring the owner to give up her business and submit to him. This owner, the widow Tampopo (Nobuko Miyamoto), reluctantly inherited the small business when her husband died, but she has no natural affinity for the preparation of ramen. After a fight between Gorô and Pisuken’s gang leaves the driver unconscious, she takes him in for the night and in the morning asks the two men for their honest opinion about her cooking. Gorô tries to be polite and noncommittal, but Gun bluntly tells her that her noodles are rubbish. When Gorô provides a detailed critique, she asks him to become her mentor – hinting at that Western trope of the wandering loner temporarily being drawn towards a domesticity for which he is unsuited. 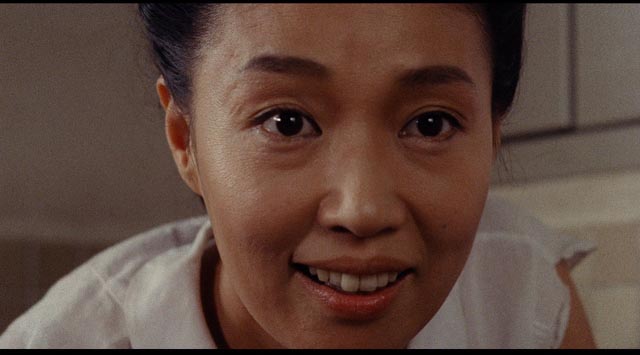 But he does take on the task, and the main thread of the movie centres on the gradual gathering of a team of experts who assist Tampopo in her rigorous training. The film is full of charming vignettes which focus on individual aspects of the production of the perfect bowl of ramen – the technique for creating a perfect broth, the intricate business of getting the noodles just right, the art of presentation. These helpers come from all levels of society – the chauffeur of a wealthy man, a former ramen master who now lives as an outcast among vagabonds who enjoy their own form of gourmet dining by scavenging from the best restaurants (in one of the film’s loveliest asides, one of these men breaks into a restaurant to cook a wonderful rice omelette for Tabo).

Although there aren’t seven masters, this all plays like a playful homage to both Kurosawa’s Seven Samurai (1954) and its Western transformation in John Sturges’ The Magnificent Seven (1960), with Gorô himself reminiscent of the many nameless strangers who populate the spaghetti western. Gorô’s training regimen combines echoes of the sports movie (Tampopo undergoes rigorous workouts Rocky-style) with industrial espionage (she spies on other ramen chefs to learn the secrets of their trade, or uses subterfuge to get them to reveal those secrets unsuspectingly), all of which dovetails with domestic drama and the basic struggle for economic survival. 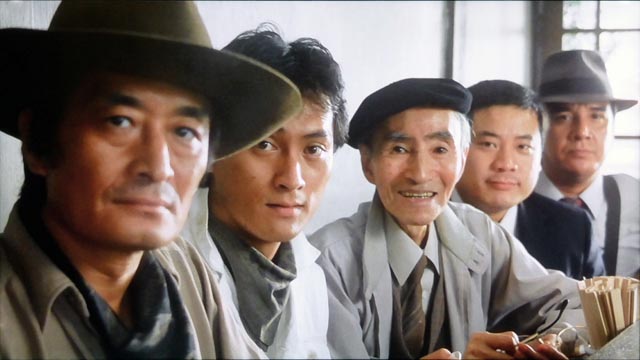 Gorô (Tsutomu Yamazaki) and his team of specialists

But while Itami is playing here with a mixture of genre tropes, the heart of the film is something more subtle; this is about the apprenticeship of a craftsperson who, through the acquisition and development of very specific skills, gradually raises craft to the level of art. In this, Tampopo echoes David Gelb’s documentary Jiro Dreams of Sushi (2011). Gorô, like Jiro (and by extension Itami), disdains flamboyant displays of extraneous motion; the quest he sets for Tampopo involves mastering complex tasks to the point where they can express a perfect simplicity.

In this, the choice of ramen is telling; this is the simplest, most plebeian of cuisines – a bowl of noodles in broth topped perhaps with a few slices of roast pork and vegetables. The art here belongs to ordinary people, not to an aesthetic elite; it is egalitarian. 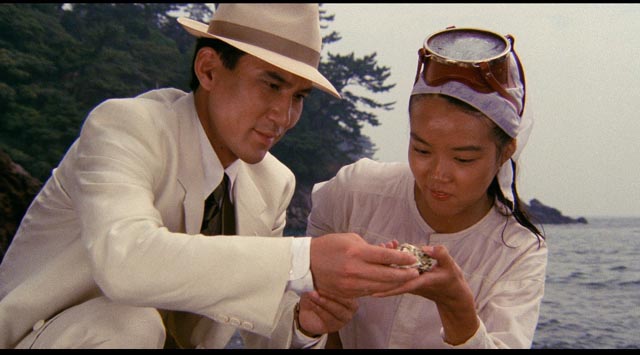 In another diversion, as Gorô rides a bike beside Tampopo on a training run beside a lake, the camera’s attention is drawn to a passing group of businessmen, who are followed to a fancy restaurant. Here, the very serious men in suits are too timid to order from the French menu until one of them unimaginatively chooses sole meuniere, consomme and a Heineken … which the others all order in turn until the youngest and most subordinate member of the group (an assistant who carries their briefcases) engages in a knowledgeable conversation with the waiter and orders a much more elaborate meal, a pointed violation of the social order which shocks and embarrasses his superiors.

In another vignette a man rushes home to find his wife on the verge of death; trying to stave off the inevitable he urges her to cook yet one more meal for him and their children … which she does, dying at the moment they begin to eat. Weeping, the man urges his children to keep eating because this is the last meal they will ever have from their mother. This conflation of food and death reaches its climax in the fate of the man in white, shot down on a rainy night and regretting as he dies in his lover’s arms that they never had a chance to share one of his favourite meals. 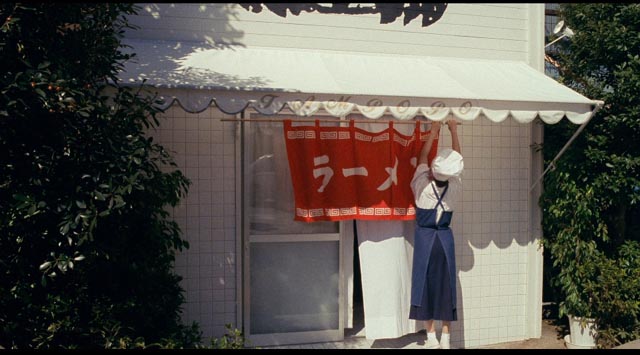 (The link between food and death is unavoidable, of course, because in order for one creature to eat, another needs to die; this fact is highlighted in two separate scenes in the film in which real animals are killed on-screen – scenes which, for this viewer at least, create a jarring disruption of the film’s comic tone.)

These tangents comment on, reflect and enrich Gorô and Tampopo’s quest to find the perfect bowl of ramen and, as in many a Western, once this task is accomplished, the stranger must give up the idea of settling down and head out on the trail once again; although the man and woman have bonded through their shared experience, conventional romance is not possible. Much has been changed by their encounter, and this small piece of the world has been left better for their meeting, but life, like a good meal, is transient. The stranger mounts his truck and drives off towards the horizon and some new adventure.

Criterion’s Blu-ray of this favourite features a 4K restoration from the original camera negative, with strong contrast and rich colours. The mono soundtrack offers clear dialogue, expressive effects (the sounds of cooking and eating), and a lively score by Kunihiko Murai, who perhaps appropriately had previously written scores for some of the Zatoichi, Lone Wolf and Cub and Hanzo the Razor movies.

Criterion has loaded the release with extras, beginning with an engaging Making of Tampopo (1:30:08) narrated by Juzo Itami. This record of the production provides fascinating glimpses of the practical side of movie-making – the process of casting, finding the right wardrobe and makeup for the characters, working with the actors, staging fights, laying dolly tracks …

There are interviews with star Nobuko Miyamoto (11:10), Itami’s wife and long-time collaborator, who talks about the actor-director relationship, and Seiko Ogawa (15:53), who did all the cooking for the production, as a highly specialized part of the prop department.

There’s a video essay on the film’s style, The Amateur and the Craftsperson by Tony Zhou and Taylor Ramos (10:04); and The Perfect Bowl (22:20), an interview featurette in which ramen chefs and restaurant owners talk about the art of the noodle bowl and the influence the film had on spreading a taste for the dish internationally.

Itami’s first directorial effort, Rubber Band Pistol (1962, 32:39), is also included. This black-and-white short, made early in his career as an actor, and two decades before his feature debut with The Funeral (1984), has some interesting camerawork and editing, but feels like little more than an ambitious student film.

There is also a trailer (1:55) and a booklet essay by food and culture writer Willy Blackmore.