Combat! was one of the most popular and well-received series of the early to mid ’60s. Lasting for five seasons, it ran two-and-a-half times longer than the historical period it covered, following the activities of an American infantry squad from D-Day … well, actually not to the end of the war; the squad never got out of France before the end of season five. While the series ran concurrently with the increasing U.S. involvement in Vietnam, which eventually triggered such chaotic social unrest and hostility towards the military, Combat! looked back to what was viewed as the last “good” war, one still viewed as morally untainted.

Created by Robert Pirosh, whose career as a writer went all the way back to the mid-’30s and a couple of Marx Brothers movies, the series most closely resembled a number of movies from late in World War Two and the years immediately after – movies like John Ford’s They Were Expendable, Lewis Milestone’s A Walk In the Sun (both 1945) and, more crucially, William A. Wellman’s Battleground (1949), which had been written by Pirosh. These movies left behind the propaganda needs which had dominated during the war and began to examine the actual experiences of ordinary fighting men and the psychological costs inflicted by immersion in the complex mix of boredom and fear they faced in the war.

This is the subject of the series, a microcosmic look at the daily grind of men for whom only the immediate moment matters; across 152 episodes in five years, Combat! provides absolutely no larger context for the action depicted. These men are too concerned with small, specific objectives and their own survival to take note of strategic concerns. And so the series takes on an almost ritualistic flavour as it continually reiterates, with seemingly limitless variation, the same situation: a patrol, an encounter with the enemy, brutal combat, injury, death … and for the core group led by Sgt. Saunders (Vic Morrow) another brief reprieve before the possibility of death rises up again on the next mission.

As with movies like A Walk In the Sun and Battleground, the strength of the series is this well-drawn group of central characters – the tough, intelligent Saunders, deeply aware of the job that needs doing, while just as deeply concerned with the safety of his men and his personal responsibility for their survival; Caje (Pierre Jalvert), a Cajun who is perhaps the steadiest soldier in the squad; Kirby (Jack Hogan), the cockiest member of the group; and hulking Littlejohn (Dick Peabody), stolid, determined and (perhaps because of his size) seemingly more prone to be wounded than the others. Rick Jason, who shared top billing with Morrow throughout the series, appears only intermittently, often just for a few moments at the other end of a radio conversation, sometimes with an episode built around his character as the squad’s commanding officer, Lt. Hanley.

In addition to this core group, who against the odds manage to survive through all those missions, the show is notable for its remarkable collection of guest stars, some already major figures, others near the start of their careers: Robert Duvall, Sal Mineo, Richard Basehart, Telly Savalas, Lee Marvin, James Coburn and literally dozens of others. Apparently everyone in Hollywood wanted to do the show, for good reasons.

Combat! boasted impressive production values – the amount of action crammed into six-day shoots is often remarkable – and most importantly, a collection of very talented directors, including Burt Kennedy, Tom Gries, Ted Post, Richard Donner, Boris Sagal, Sutton Roley, Bernard McEveety. Robert Altman, approaching the end of his long, productive apprenticeship in television before beginning his movie career, directed no less than ten episodes in the first season, helping to establish the look and tone of the show. This is one of the most significant aspects of the series; it had none of the look of TV drama as it had evolved throughout the ’50s, but rather was shot and edited like a movie. The scale of the action, the use of mobile cameras and impressive wide shots with multiple focus points, gives the series at its best an epic feel within which the characters play out small (but not insignificant) moral dramas.

There are two additional reasons for the show’s sense of realism: the effective use of archival documentary material to give a sense of scope to the battles which we chiefly see from the foot soldier’s point of view, and the unusual (for the time) decision to have all the European characters (German, French, Greek) speak their own languages, without subtitles.

Combat! was perhaps the last clear opportunity in popular culture to treat the war without irony or hyperbole. As images of real war began to proliferate on television with escalating involvement in Vietnam, complicating the very idea of the military, Hollywood was quickly moving to transform World War Two into an overblown kids’ adventure with features like The Dirty Dozen, Where Eagles Dare and the like, eventually smothering any remnants of history under layers of anachronism in movies like Kelly’s Heroes. It’s not surprising that Combat! reportedly had a powerful effect on veterans and their families, creating an opening for a new conversation about those vets’ experiences which they’d been reluctant to discuss before, a conversation which perhaps would have been impossible just a few years later as many of the vets’ own kids turned fiercely against the war in Southeast Asia.

Although production values remained high throughout, the lack of a larger historical arc to give events a more defined purpose makes some of the later episodes – particularly in the final, colour season – seem less “realistic” than the earlier black-and-white shows, more like movies than history. This effect of diminishing returns is also rooted in the limitations posed by studio sets and California locations; for the first couple of seasons at least, much of the action takes place in and around the same French village which is progressively destroyed as the show continues. And when shows open up into wider landscapes, they seldom look much like Europe. It’s quite startling in the first show of season four (Main Event) to see long shots of the squad walking by a broad French river and a jeep driving up into the forecourt of a big chateau – excellent second unit work seamlessly integrated into the material shot on the studio backlot back home.

Episodes inevitably vary in quality, but the overall quality of the writing is consistently high throughout the five seasons. The writing team of Bob and Esther Mitchell, with seventeen episodes from seasons two through five, contributed some of the strongest scripts; Robert Altman and Burt Kennedy occasionally wrote the episodes they directed; other writers included Richard Maibaum (of no less than thirteen James Bond movies), David Z. Goodman (Straw Dogs), John D.F. Black and Gene L. Coon (both soon to be contributors to Star Trek). Crucial to the show’s success were cinematographer Emmett Bergholz (who shot 117 episodes) and special effects supervisor A.D. Flowers (77 episodes), who created large-scale, complex combat sequences on a very tight schedule.

As impressive as the show is, the RLJ/Image Entertainment 40-disk set presents the viewer with a few problems, chief among them the absence of a program guide, or even a simple listing of show titles on the cases of the five individual seasons. If you’re looking for a particular show, you just have to start putting disks into your player until you find it. Personally, I went on line and found a complete episode listing which I printed out to help me get through the set. In addition, the set is organized according to its syndication sequence, not by original air date. This is not a crucial problem as each episode stands alone, without a connection to a larger story arc, but it does to some degree obscure the development of the show in terms of performance, production values, directorial nuances and so on.

This set appears to be a repackaging of earlier season releases (originally with each season split into two separate collections, still indicated in the on-screen menus ). Those releases received a fair amount of criticism over the issue of episode completeness; there were accusations that these were edited/time-compressed shows from the syndicated run rather than the original broadcast shows. This seems questionable to me – all the episodes I watched seemed dramatically intact, and to my eye there didn’t appear to be any “speed up”. But more importantly, in one of the set’s extras, Vic Morrow mentions during an interview that the show ran 47 minutes – which is the length of the episodes on the disks … except for the final, color season, which featured a move to MGM and obviously slightly higher budgets, with an expansion to a 52-minute running time. Possibly the original impression that the episodes of the earlier seasons had been cut was due to some confusion arising from the changes in that final season.

In terms of quality, the transfers are uneven, and not helped by jamming four episodes onto each disk (three per disk in the final season). Although many of the sources appear to be in pretty good shape, with strong contrast, the image – particularly in long shots – is often slightly soft. But all the episodes I sampled were very watchable, with clear sound.

The set offers a range of extras, some odd, some valuable. There are no less than 29 commentary tracks, nine featuring actors (both regulars and guest stars); four with assistant director, later director Michael Caffey; five with assistant director, later director Georg Fenady; four with writers (Esther Mitchell, Shirl Hendryx); six with directors (Ted Post, Richard Donner, Sutton Roley and Robert Altman – the latter disappointingly sparse). These commentaries provide an excellent picture of what went into making the show, and also what made it significant in terms of both production difficulty and narrative content. 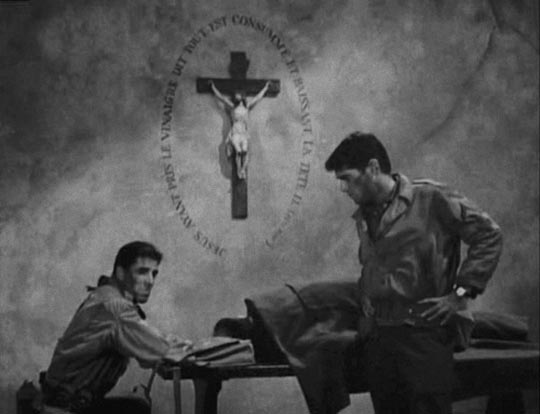 There’s a short interview-based featurette called Memories of Combat! Season 1 (23:23), which suggests that there were plans for similar retrospectives for subsequent seasons which, however, haven’t materialized; a 40-minute radio interview with Rick Jason, promoting the autobiography he published in 2000; a featurette on the episodes directed by Vic Morrow (27:19), which emphasizes the great respect his co-workers had for him and the startlingly innovative cinematic approach he took to the seven episodes he directed, including a lot of hand-held shooting in action sequences and some striking expressionist camerawork; a two-part featurette on the final season, Combat! This Season in Color (32:22, 30:18); The Big Picture, a short documentary produced by the war department in praise of the American infantryman narrated by Vic Morrow; and ten Photo Galleries spread across the entire set. 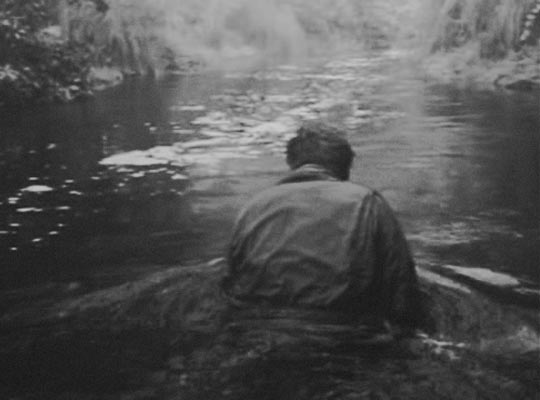 The oddest extras, however, are two 14-minute interviews, one with Vic Morrow, the other with Pierre Jalvert, which were produced by the government to promote Social Security. There’s no connection between that department and what the actors have to say about their careers, and specifically their involvement with Combat!, and each interview gets a lengthy interruption as someone explains for several minutes about how to apply for Social Security. This bizarre, and not very convincing, juxtaposition of the entertainment industry and government programs is, however, the source of that quote about the actual length of the show and since the comment was made in the middle of the series’ run, I think we can take Morrow’s word for it that the episodes in this set are actually complete.