Genre, of course, is not limited to the fantastic — science fiction, fantasy, horror. Contemporary and historical dramas can also fall within genre boundaries.

Denis Villeneuve’s thriller was much-praised by critics and audiences alike, and yet it struck me as a genre movie desperate to convince its viewers that it was actually something much more “important” (as Jonathan Demme’s The Silence of the Lambs also tried to do). Villeneuve has style to spare and his earlier films deal with heavy themes of mortality and transformation; the cool, detached surface of Polytechnique (2009) almost made you think he had something profound to say, although in the end turning the massacre of women at a Montreal college in 1989 into a tragedy for the male protagonist is somewhat questionable. In Prisoners, when two young girls disappear on Thanksgiving Day, and some evidence points towards a mentally challenged young man, one of the fathers, Keller Dover (Hugh Jackman), turns instantly psychotic and kidnaps the suspect, imprisons and tortures him with the help of his reluctant buddy, Franklin Birch (Terrence Howard), the other father.

Meanwhile Detective Loki (Jake Gyllenhaal) is simultaneously trying to solve the kidnapping and growing suspicious of Dover. The unusual name of Gyllenhaal’s character is one indication that the movie is straining for some kind of profundity; but what exactly does it mean that he’s named after a figure of Norse mythology who offended the gods and ended up imprisoned and tortured himself? And why does Gyllenhaal, who’s more or less reprising his investigative role from Zodiac, make the sole defining characteristic of Loki his incessant blinking, an irritating tic which becomes more and more distracting as the movie drags on.

And it does drag on. As in Christopher Nolan’s Dark Knight movies, seriousness here is indicated by a slow, ponderous pace. The drawback to this strategy with Prisoners is that it allows the viewer to become aware of the mechanics of Aaron Guzikowski’s script. Each element of the plot seems to fall into place with an audible clang, with no detail which doesn’t eventually fit with Lego-like precision into a structure which comes to seem more and more like a typical Lifetime cable movie. Every character, past and present, is connected to the central idea of childhood trauma being passed on down the generations, but none of the revelations when they come have any dramatic impact because the pacing precludes any kind of surprise; instead of triggering a sense of discovery, a change in what we’ve been thinking as the narrative plays out, we’re more likely to shrug and think “oh, that’s what that was about.” The final revelation of the villains’ motives echoes the pseudo-religious rationale for John Doe’s crimes in Seven. But in Fincher’s film, those motives played out in a stylized allegory of good and evil, while in Prisoners, they’re offered as a kind of psychological realism.

Between Hugh Jackman’s instant transformation into a character out of a seedy torture-porn thriller and the overwrought, poorly constructed ending, Prisoners wheezes along for two-and-a-half seemingly interminable hours. The movie’s pretensions to serious drama ensure that it offers no satisfaction as a thriller, but its sheer creakiness undermines its own sense of self-importance.

Wong Kar-Wai, in a career now spanning a quarter century, has created some of the lushest, most romantic movies we’ve had the pleasure to experience (and you do experience, rather than merely see, Wong’s films). His international breakthrough was Chungking Express in 1994; that film, like As Tears Go By (1988), Days of Being Wild (1990) and Fallen Angels (1995), is steeped in the rich emotional atmosphere in which the lives of his urban characters collide and separate and sometimes reconnect again. My personal favourites among his films are In the Mood For Love (2000, and to a slightly lesser degree, that film’s strange sequel/epilogue/mirror image 2046 [2004]) and, more relevant to the current topic, Ashes of Time (1994). That most visually gorgeous of martial arts movies is an extrapolation of wuxia pian into realms of poetry, a meditation on love, memory and loss (including the loss of memory). Its labyrinthine, non-linear construction induces a kind of dream state in the viewer which echoes the characters’ own fragmentary experience of lives in which they have deliberately erased the past to spare themselves the pain of loss, only to find themselves continually re-experiencing what they have tried to escape. Ashes of Time is what you might have got if Andrei Tarkovsky had decided to make a martial arts movie.

Wong’s new film, his second foray into martial arts, is visually ravishing but, for me at least, less satisfying than Ashes. Retelling the by now quite well-known story of Ip Man, The Grandmaster is one of at least five movies about the martial arts master to be released since 2008. Needless to say, it’s the most lushly romantic and least conventional of those films. There’s an almost oppressive interiority to The Grandmaster, much of it shot in dark, opulent interiors, with exteriors frequently set at night and filmed on studio sets. Its formal qualities often reminded me of the work of Hou Hsiao-Hsien.

The narrative is fragmentary and allusive, spanning from the time of Ip Man’s martial arts mastery during the Japanese occupation to his later years in Hong Kong (where he eventually became the teacher of Bruce Lee). The film has an elegiac quality; right from the beginning, there’s a sense of a vast, rich history passing away. As is traditional in the genre, lives are constrained by the philosophies of the various martial arts schools, relationships reflecting the conflicts between these philosophies. In Wong’s film, this is embodied in the understated, unfulfilled (potential) romance between Ip Man (Tony Leung Chiu Wai) and Gong Er (Zhang Ziyi), who in the best tradition of the genre make an emotional connection during a beautifully choreographed fight sequence after she challenges him. Later, when they meet again in Hong Kong, the film takes a long diversion to tell Gong Er’s own story; this is, oddly, the most satisfyingly sustained stretch of narrative, and Ip Man himself is nowhere in sight. 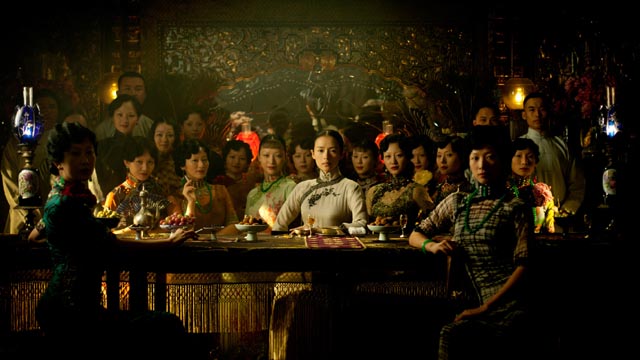 There’s an odd disjointed feel to the film which I initially attributed to the heavy, evil hand of Harvey Weinstein who had picked it up for distribution in North America. The version released in Asia runs 130 minutes, but the version we got here is only 108 minutes. In addition, particularly in the early part of the movie, the screen is littered with explanatory text which constantly interrupts the dramatic flow. The resulting effect is more of a sketch of the story than the story itself.

But apparently, this alteration of the film was supervised by Wong himself (perhaps to forestall even worse butchery at the hands of Weinstein), who disappointingly justifies it by saying that western audiences just aren’t capable of understanding all the subtleties of Chinese culture. Certainly, as viewers, we may miss many nuances in a film from another culture, but this very unfamiliarity and difference is what makes foreign films so fascinating. The idea that a Chinese film needs to be massaged and simplified to avoid difficulty for an English-speaking audience diminishes the value of a diverse film culture. Even if Wong did the work himself, the underlying idea reflects the awful influence of people like Harvey Weinstein over the past few decades, an influence which while supposedly making foreign films more accessible has steadily eaten away at foreign film distribution in North America. By treating viewers with condescension, this practice has shrunk what at one time was a much broader audience.