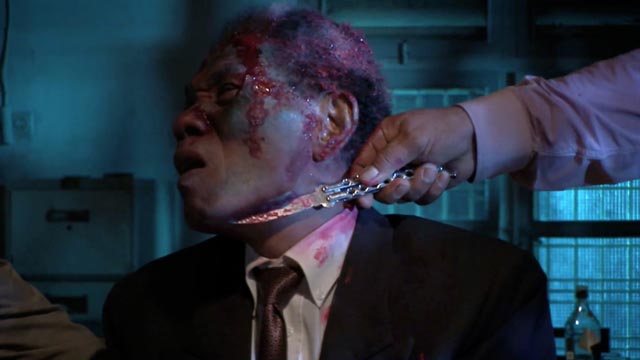 The murderer plays victim: Anwar Congo in The Act of Killing (2012)

Joshua Oppenheimer’s documentary The Act of Killing (2012) is a difficult film to write about. In fact, it’s a difficult film to watch. But it demands thoughtful attention as it deals, simultaneously devastating and creative, with issues of critical importance in light of what’s going on in the world today. 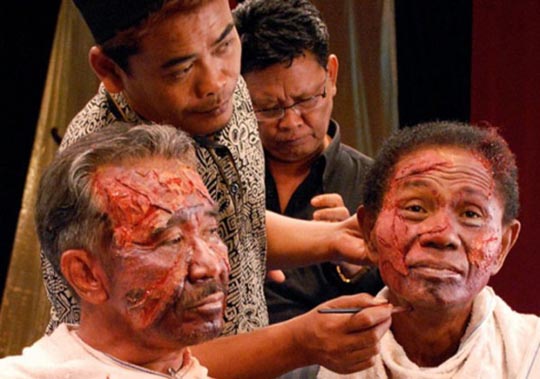 Trying to describe this film almost inevitably makes it sound conceptually appalling. Oppenheimer got to know a number of the perpetrators of the Indonesian genocide of 1965-66 when a military coup overthrew the government and the new rulers used criminal gangs and militias to slaughter all opponents of the new regime – officially a purge of “communists”, the killings included many ethnic Chinese and the populations of entire villages. Although estimates vary widely, it seems probable that more than a million people (Oppenheimer says perhaps as many as three million) were murdered after the coup, which was largely supported by the West.

The government which sanctioned the killings has maintained power in Indonesia ever since, so the perpetrators have never been faced with any kind of prosecution. In fact, they have been viewed as national heroes, living comfortably in the decades since.

Oppenheimer’s film gives us a portrait of a gangster state where the murderers have never been forced to confront their actions. But what makes the film so powerful and disturbing is that it doesn’t stand outside in order to condemn; we see this history through the eyes, emotions and justifications of the killers. You get the queasy feeling that this is the way aging Nazis would look at the world if they had won the war and could proudly look back on the extermination of the Jews.

In order to investigate what happened, and more importantly how it could have happened, how human beings could have committed these acts, Oppenheimer proposes that these murderers make a film about what they did, giving their imaginations free rein to depict their actions however they want. These men see this as an opportunity to celebrate what they believe were patriotic acts. What follows becomes increasingly strange as they re-stage brutal interrogations, garrottings, beheadings, the massacre of a village … all leading to a bizarrely colourful musical tribute to themselves and their ideals of “freedom” (they constantly reiterate that the word “gangster” means “free man”), set to the theme of Born Free, during which their victims thank them for having been set free and sent to heaven. 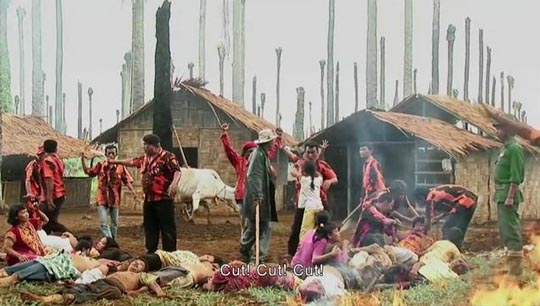 But as disturbing as this film-within-the-film is, what is even more unsettling is the accumulation of details which reveal just how disconnected these men (and their society) are from what we might consider “ordinary morality”. As the film progresses, you realize that you’re in the presence of genuine human evil and, most frightening of all, in many respects it wears an almost charming face.

The main subject of the film is Anwar Congo, a pleasant, smiling grandfather who is said to have personally murdered a thousand people. Accompanied everywhere by his comic sidekick, another killer named Herman Koto, Anwar describes his love of movies, how he’d come out of an Elvis film feeling elated, dancing and singing as he went to the office to torture some prisoner whom he would then kill. He calls these “happy killings”. He describes the slaughter of hundreds on a small confined rooftop; at first he and his friends beat them to death, but that made too much blood, so they devised a wire garrotte which was much more efficient. Then he does a little soft-shoe on the roof, grinning with pleasure. Later, watching tape of the re-staging of a strangulation on that roof, his only comment is that at the time he certainly wouldn’t have worn white pants, so the scene is inaccurate. 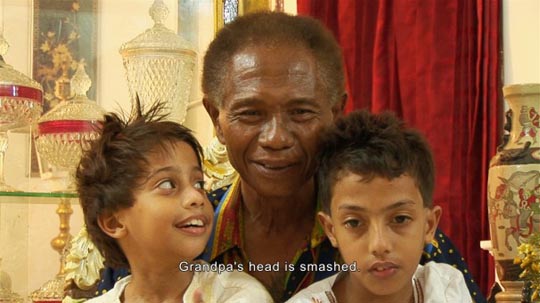 And so it goes on. After the staging of the village massacre in which the “performers” really throw themselves into the scene (one man reminisces nostalgically about the pleasure of raping 14-year-old girls: “for you, it’s hell on earth, for me it’s heaven”), the young son of one of the killers can’t stop crying when the director yells cut and his father complains that the boy, surrounded by the remnants of the carnage, is embarrassing him.

Anwar and his friends are guests on a TV talk show where the cheerful, smiling host congratulates them for having rid the country of communism, asking for details about how they interrogated and killed their victims. A prominent newspaper publisher who oversaw interrogations and ordered murders blithely states that his job wasn’t to print the truth, but to make the people hate those who had to be killed. A government minister congratulates the country’s largest paramilitary group for its service and thanks god that there are so many gangsters willing to do what the government itself isn’t equipped for. 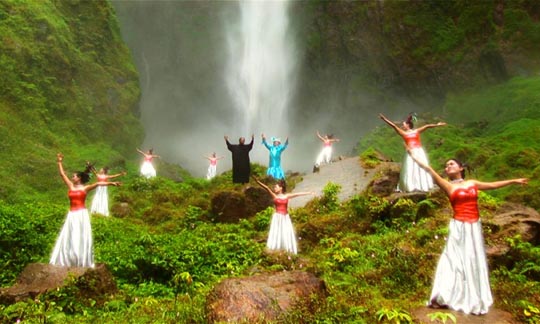 The kitsch of forgiveness

After shooting a scene in which Anwar plays the part of a victim, a “communist” tortured and then strangled, he calls his two young grandsons in to watch the scene on tape. You can hear Oppenheimer off screen expressing concern that this is inappropriate, but Anwar insists that it’s fun to watch grandpa get beaten. But then something shifts and some real emotion suddenly kicks in.

In the most chilling moment in the film, Anwar says that during the scene he suddenly felt an uncontrollable wave of fear and he asks Oppenheimer whether this is what his own victims felt. Oppenheimer points out that those victims would have felt infinitely worse because for them it wasn’t a movie, they knew they were going to die. No, Anwar insists, he really knows now how they felt. 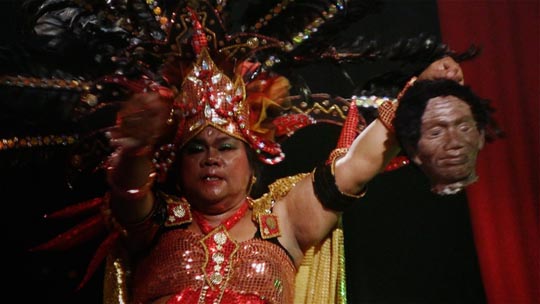 At the end he returns to that rooftop and looks at it with seemingly new eyes; it’s as if he’s actually seeing his victims for the first time and his body is suddenly racked with agonizing dry heaves, as if he’s finally trying to vomit out his guilt … but nothing comes; it’s still trapped inside. And what started out as a celebration of his patriotic activities in the ’60s has perhaps at last awoken some vestige of conscience.

From our comfortable distance, it’s always been difficult to understand how people can perpetrate atrocities – how did ordinary Germans commit mass murder, how did the Khmer Rouge wipe out a large part of Cambodia’s population … Rwanda, Abu Ghraib, Guantanamo … so many places where people commit “inhuman” acts. Joshua Oppenheimer has managed to come as close to an explanation as it may be possible to get and the true horror of it is that these acts are actually committed not by obvious monsters, but by people very much like ourselves, given license by social and political forces which exist not in some other conceptual universe, but somewhere on a continuum along which the rest of us also reside.

The Act of Killing is essential viewing, and probably the most frightening movie I’ve ever seen.