Guillermo del Toro, who made his start – after a couple of shorts and some TV work – with the strikingly original Cronos (1993), has subsequently split his time between small, personal Spanish-language horror fantasies and increasingly big budget Hollywood productions. Along the way, he has become a major force in contemporary genre cinema – not only as a director, but also as a writer and producer. And one of the things he has chosen to do with his industry influence is support a number of other filmmakers just starting out in their directing careers: including, in the past few years, the Ecuadorean Sebastian Cordero, the Spaniard Juan Antonio Bayona, the Canadian Troy Nixey.

The latest filmmaker to benefit from del Toro’s support is the Argentinian Andres (Andy) Muschietti, whose debut feature Mama, based on a short film made in Spain in 2008, has just been released on DVD and Blu-ray by Universal. It’s easy to see what attracted del Toro to the project. Like Bayona’s The Orphanage and Nixey’s Don’t Be Afraid of the Dark, Mama has strong connections with del Toro’s own Spanish features, stories combining both wonder and fear in worlds perceived through the eyes of children. While it’s true that none of these films have managed to match the imaginative power of del Toro’s work, Mama comes closest.

Mama opens with a quick series of deft shots establishing a sense of intense danger and vulnerability for Victoria and Lilly, the two daughters of businessman Jeffrey (Nikolaj Coster-Waldau) who’s just gone over the edge, killing his business partner and now the girls’ mother. He takes the two children, aged three and one, on a wild ride over winter roads, finally crashing in remote woods. Dragging the girls deeper into the forest, he finally discovers an abandoned cabin where, in a final moment of despair, he prepares to kill them too … until something unseen rips him away and kills him.

Five years later, a couple of men who have been hired by Jeffrey’s brother Lucas (Coster-Waldau again) to keep searching for the missing girls finally come across the cabin. What they find triggers a level of creepiness which the film more or less maintains for the rest of its running time: the two girls have become completely feral, skittering about the derelict building on all-fours like a strange cross between monkeys and insects.

Lucas and his partner Annabel (Jessica Chastain) gain custody of the girls after a court fight with their mother’s sister, Aunt Jean (Jane Moffatt), but whatever it was that helped the girls survive in the cabin for five years tracks them to their new home and, after quickly getting Lucas out of the way, the film settles down to a dissection of different styles of motherhood. The reluctant, delayed-adolescent Annabel (she plays guitar in a rock band) gradually overcomes her resistance to responsibility – and her fear of the unruly children – and takes up the fight against the dangerously possessive, ghostly Mama.

The script – written by Muschietti and his producing partner and sister Barbara, with help from Neil Cross – continuously treads a fine line between genre cliches (there are a number of conventional shock moments using editing and sudden sounds to make the audience jump) and authentic character-based drama, the latter providing the movie with a strong spine which carries it over its weaker moments.

Chastain, who received so much acclaim for her work in Kathryn Bigelow’s Zero Dark Thirty, is fully committed to Annabel, providing an authentic, believably faltering transition from reluctance and even repressed hostility to a growing sense of responsibility and finally a fierce determination to care for and protect the girls. And that performance is helped enormously by the work of the two young actresses playing Victoria and Lilly. Megan Charpentier provides the film’s pivotal role as Victoria, the older of the girls who, unlike her sister, can remember life before the cabin and Mama and longs to return to that lost security. But Isabelle Nelisse as Lilly is a revelation; this young child expresses so much awareness, such depths of emotion in her attachment to her ghostly guardian, that Annabel doesn’t stand a chance with her.

These three performances carry the film past the script’s various weaknesses – particularly the underdeveloped secondary roles of Aunt Jean and Dr. Dreyfuss (Daniel Kash), the psychologist who is supervising the effort to re-socialize the girls, while incidentally digging up the backstory on Mama. But what makes Mama so effective as a horror film, and not simply a drama of motherhood, is Muschietti’s skill in surrounding the performances with a consistently creepy atmosphere. His use of shadows, suggestion, background detail and things impinging on the edges of the frame, generates a continuous sense of unease which makes even the most mechanical shock effects work. 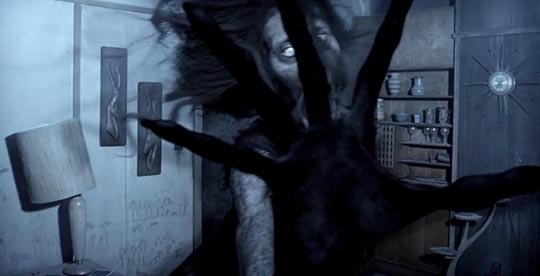 By the time of the climax on top of a rocky cliff above a lake at night, the film has even developed a degree of sympathy for Mama despite her destructive influence on the girls, and the climax makes emotional sense even as it supplies a shock which is almost entirely unexpected in a mainstream PG-13 production.

The combo edition also features a DVD, plus Ultraviolet and digital copies.

The extras: The disk includes a handful of deleted scenes with optional commentary, none of which add anything important. The original four-minute short is also included with a brief introduction by Guillermo del Toro and optional commentary by Andy and Barbara Muschietti. A brief making-of featurette outlines the background of the project, with a feature commentary by the Muschiettis filling in more detail.

Most interesting, however, is Matriarchal Secrets: The Visual Effects of Mama, a short featurette (included on the Blu-ray but not on the accompanying DVD) about the creation of Mama herself. It turns out that the slender contorted figure of the ghost was actually performed by Spanish actor Javier Botet, a disturbingly tall and thin performer who can apparently bend his body into various unnatural postures (he has the genetic disorder called Marfan’s Syndrome). Although the character is enhanced with CGI, much of Mama’s disturbing appearance derives from the live performance, which in retrospect makes her seem even creepier.