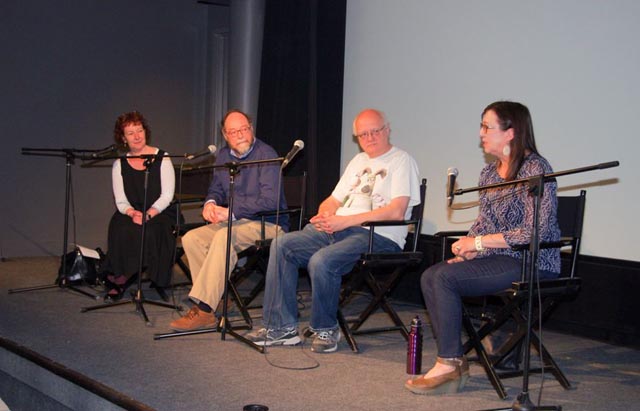 Brenda, Howard, me & Tricia: It’s easy to see who feels the least comfortable on the panel! (Photo by Ken Spicer)

It’s Monday morning and I’m still coming down from an exhilarating weekend high. My friend Dave Barber, programmer of the Cinematheque, has been talking to me since last year about screening my documentary, Going: Remembering Winnipeg Movie Theatres, but the question was always how to fit it into his schedule. Well, that and the fact that my contract with MTS Television didn’t permit such screenings until six months after the film became available on their “Stories From Home” on-demand channel.

Well, it finally happened this weekend (slightly cheating the six-month rule) and the response was more than I could’ve hoped for. Although I’d tried for some media coverage when the film was completed and began to show on MTS, there wasn’t much interest. For some reason that particular venue negates media interest because it doesn’t constitute a discreet event – anyone can watch it at anytime over a period of a couple of years – but this weekend, even though we just had two screenings, I got what for a local like me is amazing coverage.

Alison Gillmor reviewed the film in glowing terms on the CBC’s afternoon drive-home radio show on Friday. After listening to her, even if I’d had nothing to do with the film, I’d have been eager to see it!

Then, earlier in the week, I had been interviewed by the Free Press movie reporter Randall King, hoping for a mention of the upcoming screenings. I was floored to find the entire front page of Saturday’s entertainment section devoted to me and the film, continued on page 2. I couldn’t have asked for a better push and in the event, it really paid off. Both the Saturday evening and Sunday afternoon screenings were almost sold out. 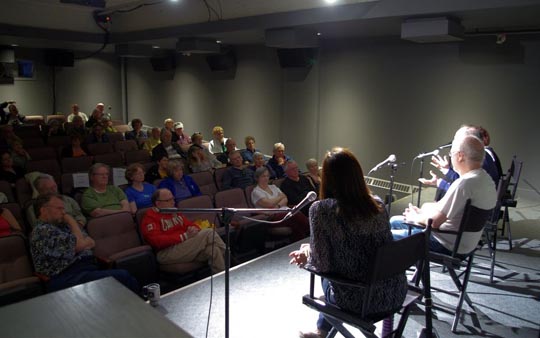 I’d only previously seen the film once with an audience, and that was at last December’s premiere which was packed with people involved with the production and their friends and relatives – not an entirely neutral sample! So this weekend was the first time I’d watched it with random members of the public who’d actually come out and paid to see it. And the response was very much like the premiere. The film triggers a lot of fond memories for people, eliciting quite a bit of laughter and evoking an emotional reaction.

I was kept in the lobby for more than half an hour after the Saturday evening show by people who wanted to talk about their own experiences and told by a number of them that they felt the film was an important contribution to local history – which still seems surprising to me as the whole impetus for the project was very personal to me, an attempt to codify through multiple voices my own memories of the city’s vanished theatres.

Despite really nice weather (after a very wet and stormy week), there was an even bigger crowd on Sunday afternoon. Following the screening, we had a panel discussion on broader issues about the ways film exhibition has changed over the years. I felt like the lightweight up on the stage as I sat with film academics Brenda Austin-Smith (University of Manitoba), my friend Howard Curle (University of Winnipeg) and Tricia Wasney, the public arts officer at the Winnipeg Arts Council and former film programmer at the Winnipeg Art Gallery. All of them very erudite while I had a bit of brain freeze (naturally, walking home later, I kept thinking of all kinds of interesting things I should have said!). 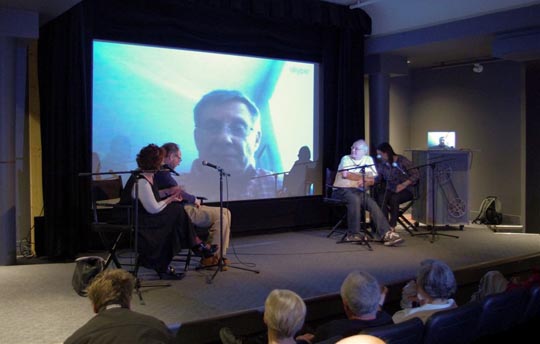 Partway through the discussion we were joined from California via Skype by Leonard Stone, one of the group who opened Winnipeg’s first arthouse cinema in 1962 (this weekend marked the 51st anniversary of the opening, which gave Dave his excuse to program my film). The 16mm dual-screen (also a first) PACE, was established by Stone and his partners in the basement of Winnipeg’s first shopping mall, Polo Park, after a few years of running the Winnipeg International Film Festival. The theatre was dedicated to showing foreign and independent (including Canadian) films which weren’t being screened by the major chains. The experiment lasted about four years and apparently the group made a profit when they sold the theatre in 1966 to Famous Players, who continued to run it for a few years before converting it to a single 35mm theatre.

Although it sounded as if even back then there were difficulties in booking films for an independent theatre (something Dave still struggles with today) and bringing in an audience, the most interesting detail mentioned by Stone was that their lease with the mall cost them only 25¢ per square foot! He attributed their making a profit to that fact alone.

Having moved on to other things since finishing Going, the weekend was a nice reminder that the film has potential life beyond its cable presence. I’ll really have to get down to looking into turning it into a DVD – maybe I can actually make some money off it!