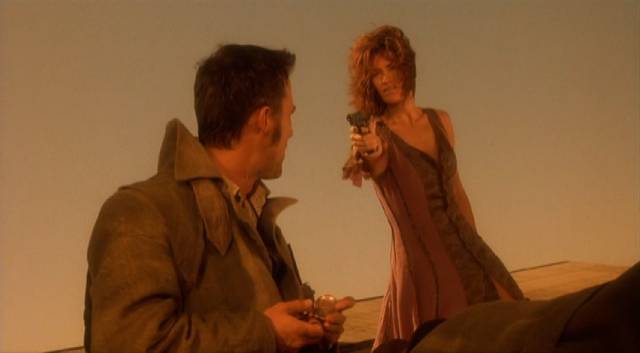 In Dust Devil, a woman confronts and defeats a monster who threatens her with violence; real life is less cut-and-dried

It’s often better not to know too much about the life and personality of people whose work you like and admire. All too often creativity comes with traits which would not be appealing or acceptable in someone with whom you have a personal relationship. Whether writers or artists, musicians or filmmakers, learning too much can complicate our responses to and interactions with their work. How then do we navigate our moral engagement with art that we respond to emotionally, intellectually, viscerally in ways which enrich our lives when we learn unwanted things about what lies behind their creation?

It seems impossible to have a single standard response. Temporal distance mitigates things to a degree – it’s well-known that Alfred Hitchcock was pervy about his leading actresses, something which even spills over into the treatment of characters in his movies, but he remains revered by many critics and viewers. Additionally, while it may be easier to separate ourselves from a writer or painter who turns out to have done objectionable things, it’s a bit more complicated with musicians and filmmakers whose work is not simply their own but rather done in collaboration with others. To reject a filmmaker’s body of work because of their behaviour is also to reject the creative work of many others who made substantial contributions in front of and behind the camera. Do the actions of one person warrant so much collateral damage to other careers? Or is that just a weaselly excuse to hold on to works we’re reluctant to let go of?

Burrowing deeper into this hole, does it matter whether whatever the artist’s unpleasant predilections are that they do or don’t manifest in their work? Woody Allen’s creepy thing about younger women turns up in many of his movies (getting even creepier as he’s gotten older), so it’s difficult to watch his movies without being reminded about what we’ve heard of his personal life. As inexcusable as what Roman Polanski did in 1977 was, that act doesn’t manifest in his movies. Maybe that’s a self-serving justification for the fact that many of Polanski’s films are among my favourites.

Which brings me to a new instance of this dilemma. Regular readers of this blog will know that I’ve long been a fan of Richard Stanley’s work – I’ve recently written about all of his features – and I’ve always found him to be a fascinating character whose eccentricities have only added interest to his movies. (David Gregory’s documentary about Stanley’s abortive attempt to film The Island of Dr. Moreau is one of the best movies about the clash between business and art in Hollywood.)

So I’m filled with conflicting feelings in response to recent revelations about Stanley’s appalling behaviour in his personal life. Accounts of the physical and psychological violence he has inflicted on women seem utterly at odds with the persona seen in interviews and in his documentary The Otherworld, yet I have no doubt of the veracity of what I’ve read of his treatment of long-time partner and collaborator Scarlett Amaris. It will now be impossible not to see Stanley himself through this new lens – in Gregory’s Lost Soul, in The Otherworld, in various interviews accompanying his features on disk and in documentaries like Gregory’s Tales of the Uncanny, in which Stanley is one of many subjects.

But what about the features? Hardware, Dust Devil and The Color Out Of Space are the same films they always were, offering the same pleasures they always have. But the knowledge that the man who directed and co-wrote them is a kind of monster in real life (there are now a number of accounts from women whom he has viciously beaten on multiple occasions) can’t help but affect my response when (if) I watch them again. But to be honest, I don’t want to eliminate them from my collection. Until I actually do attempt to watch them again, I won’t know whether this news about Stanley will sour my viewing experience … so I’ll wait, I’ll let some time pass and see what other information comes out before I try to go back to them…

Men (and it is more often men) will continue to be assholes while creating movies which entertain and sometimes offer deeper satisfactions. While we don’t know about their asshole behaviour, we can freely enjoy their work … but when we do know, our responses become complicated by moral considerations and therein our own personal flaws may be revealed. I’ve made compromises before between what I know about an artist and what I get from their work (Polanski being the most obvious example) and those compromises no doubt err in favour of what gives me pleasure. It saddens me to know that I probably won’t ever see Stanley’s other proposed Lovecraft adaptations, but I totally understand why it’s unlikely anyone will now back those projects. Whether or not they would have been great movies, no producer is under any obligation to facilitate the continued career of someone who, it now appears, is a pretty despicable person regardless of his talent.