Basil Dearden’s The Bells Go Down, which I wrote about last week, is just one of a number of disks I recently received from England. Maybe it’s a bit of nostalgia, but the past few years I’ve been digging back into British film – partly seeking out titles I have memories of from long ago, partly to discover titles I’ve never seen before, and in some cases had never even heard of.

The Boulting Brothers and Seven Days to Noon

My first experiences of the Boulting Brothers, Roy and John, were their satirical comedies from the late ’50s and early ’60s, several of which I actually saw back at that time. I recall there was some criticism of I’m All Right Jack (1959) for its somewhat sour view of labour unions (similar criticisms were leveled at Guy Green’s drama The Angry Silence, made the following year, because it was viewed as reactionary). But that film actually attacked pretty much every layer of postwar British society, a morally bankrupt nation in which, as the title says, everybody was looking out only for their own interests.

The sourness of this and some of the other satires had grown during the ’50s in apparent reaction to the failures of the Left to create the new society rooted in the socialist ideals the brothers had held throughout the ’30s and ’40s. In fact, from the late ’30s to the early ’50s, their work was dedicated to serious examinations of British society, expressing anti-fascist sentiments at the start of the war and examining class issues in the years after, while both brothers worked for documentary film units during the conflict (Roy in the Army Film Unit and John in the RAF Film Unit). This phase of the brothers careers climaxed with the back-to-back pair of political thrillers Seven Days to Noon and High Treason in 1950 and ’51.

Watching Seven Days to Noon now, a viewer may be struck most strongly by its restraint. The plot reads like a season outline for 24, but despite the stakes voices are never raised and shots are fired only twice. In the opening scene, a letter arrives at the Prime Minister’s residence at #10 Downing Street; apparently written by one of the country’s foremost research scientists, it states that the government have exactly one week to unilaterally disarm or he will detonate a devastating nuclear device in the centre of London. Investigation quickly reveals that Professor Hillingdon (Barry Jones) has indeed disappeared and the miniature bomb has vanished from its secure storage place at a secret weapons development site.

Superintendent Folland (Andre Morell) recruits the professor’s assistant Stephen Lane (Hugh Cross) and his fiance, the scientist’s daughter Ann (Sheila Manahan), to try to track him down before the deadline, while the highest levels of government debate what to do about the threat. The investigation proceeds methodically as Hillingdon hides out in a nondescript rented room to await the response to his ultimatum. As the authorities close in, he connects with a blowsy blond named Goldie (Olive Sloan) who takes him home; much to her surprise, he doesn’t have sex on his mind and chastely sleeps on her couch. 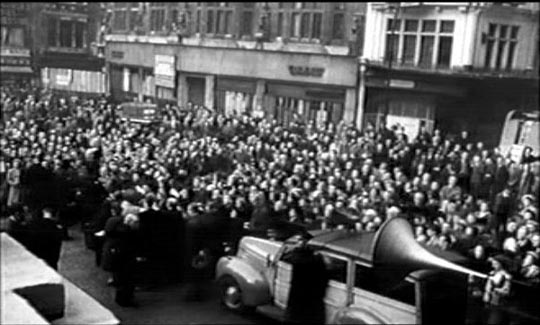 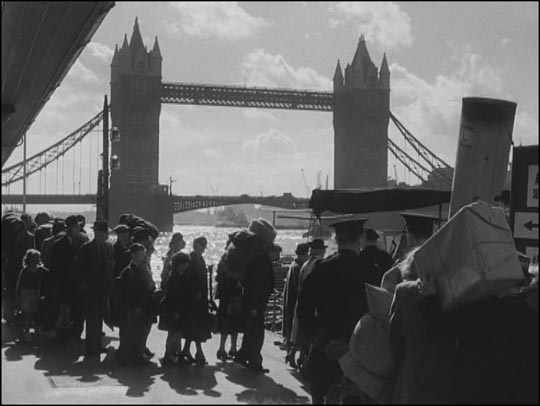 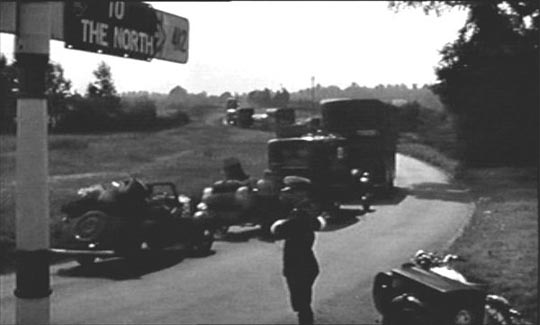 Perhaps the most British aspect of the film is the calmness with which the crisis is addressed. The government decide to evacuate the city rather than meet Hillingdon’s demands and the populace comply in an orderly manner which recalls the evacuations of the war, when a large part of the population left the city to get away from German bombs. And yet there are troubling aspects to this depiction of British calm; as the city becomes deserted and soldiers patrol the streets in search of the missing scientist, the military presence and huge posters with Hillingdon’s picture on virtually every wall inevitably stir echoes of Orwell’s Nineteen-Eighty-Four (published just two years earlier) and the off-hand shooting of a single looter takes on an apocalyptic air.

But the most surprising thing about Seven Days to Noon, and the clearest indication of the Boultings’ ideological sympathies, is the treatment of Hillingdon. The professor is no wide-eyed madman, but rather a quiet man tormented by his conscience for the part he’s played in creating ever more efficient ways of wreaking destruction on a world so recently emerged from the bloody chaos of the war. He has come to see that the inevitable end of his work is human extinction. His plan arises from a rational analysis of the state of the world in the early days of the cold war, while the authorities – the government and the military – who are desperately trying to stop him, who see him as a madman about to commit a terrible crime, are blind to the fact that their addiction to these new weapons and their inability to conceive of getting rid of them is actually the true insanity.

Nowhere to Go and the unfulfilled promise of Seth Holt

Like many British filmmakers of the ’40s and ’50s, Seth Holt started out in documentary (as an assistant editor) before his brother-in-law, the great Ealing director Robert Hamer (Kind Hearts and Coronets, Pink String and Sealing Wax, It Always Rains on Sunday), brought him to the studio. He worked his way up from assistant to editor to associate producer (on Mackendrick’s The Ladykillers), before getting a shot at directing. Given the chance, as the studio itself was in serious decline, he set out to make, as he put it, the “least ‘Ealing’ Ealing film ever made.”

Co-written by Holt and the influential theatre critic Kenneth Tynan (who worked for Ealing as story editor for two years), from a novel by Donald MacKenzie, Nowhere to Go (1958) is one of the finest British noirs of the decade, a film with a very dark, unsentimental vision and a powerful sense of visual style, accompanied by a surprising improvised jazz score by Dizzy Reece. It begins with a lengthy, silent sequence in which Victor Sloane (Bernard Lee, four years before becoming M in the Bond films) helps Paul Gregory (George Nader, perhaps best-known as the star of the notorious Robot Monster) escape from prison. Gregory is a Canadian petty criminal who used a too-smart-for-his-own-good con to cheat a Canadian widow out of her husband’s valuable coin collection. Since no one was harmed during the theft, he blithely gave himself up to police after stashing his loot in a safety deposit box, expecting to get at worst a couple of years behind bars.

But the judge, irritated by his refusal to give back the money, sentences him to ten years; he has no option but to break out. With Sloane supposedly lining up his escape from the country with a false passport in exchange for some of the money – too little as it turns out – Gregory plans to retrieve the cash from the bank and get away as quickly as possible. Naturally things go wrong. Sloane wants all the money, but mistimes his move. Gregory accidentally kills his former partner and finds himself now hunted for murder; the underworld want nothing to do with him and, improvising, he ends up on the run with a bored woman named Bridget Howard (Maggie Smith in her first movie). But by now, Gregory’s deep distrust of everyone he meets causes him to react to her with suspicion … and in true noir fashion, it all ends badly.

With Ealing dying (the studio would produce only one more feature, the next year’s Siege of Pinchgut, directed by Harry Watt in Australia), Holt had 15 minutes cut from his film by MGM to fit at the bottom of a double bill. That shorter theatrical version has shown on TCM, but recently the full 100-minute version was put out by Optimum/Studio Canal in England. I saw the shorter version a year or so ago, but can’t say from memory what was cut as the new disk seems very much like my memory of the theatrical version. The film is bleak in the very best noir sense, its flawed protagonist defeated by his own inner weaknesses more than the forces of fate. Holt shows himself to be a talented visual storyteller and a good director of actors.

And yet, he never quite matched the quality of this debut feature again. With Ealing gone, he moved over to Hammer for the thriller Taste of Fear (1961), one of that studio’s best post-Psycho movies; then alternated television work with just four more features before his early death in 1971 at age 47.