Working on my documentary about Winnipeg movie theatres continues to stir a deep well of nostalgia. I’ve recently been spending hours at the Millennium Library in downtown Winnipeg going through old copies of newspapers on microfilm, looking for ads relevant to what my interview subjects talk about. But inevitably, I find myself slowed down as I stop to look at things which don’t relate to the film, yet trigger my own memories, or surprise me with odd and unexpected details. 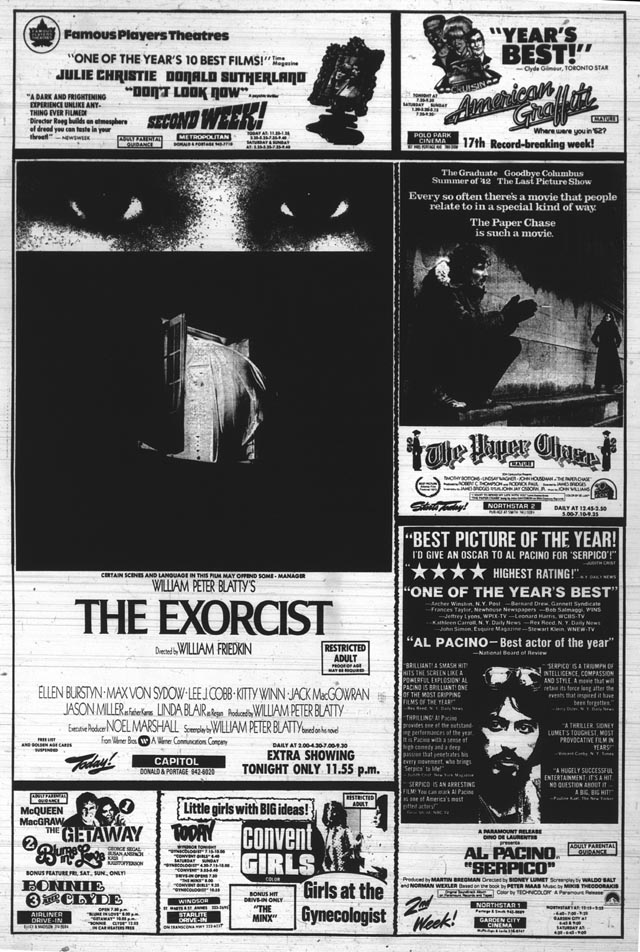 Without a specific date ahead of time, it’s necessary to scan through months of issues looking for a particular ad. While trying to find one for William Castle’s The Tingler (1959) – initially without success: it turns out it wasn’t released in Winnipeg until August of 1960 – I was startled to see a large ad for Mikhail Kalatozov’s WW2 masterpiece The Cranes Are Flying (1957). Even more surprising was seeing that it was held over week after week (although unfortunately the ad specifies that the film was “spoken in English”). I think the last Russian movie I saw in Winnipeg was Timur Bekmambatov’s Night Watch (2004) … hardly comparable on any scale of cinematic or cultural value.

But as long as Kalatozov’s film lasted, it wasn’t held over as long as Carry On Nurse (1959, second of the thirty-odd movies in the series) around the same time. In fact, after being held over for some 11 weeks, that one was later brought back “by popular demand”.

And while we’re on Eastern Europe, there was a large ad (an eighth of a page) for Milos Forman’s Loves of a Blonde (1965), hailed as one of the biggest hits of the year. 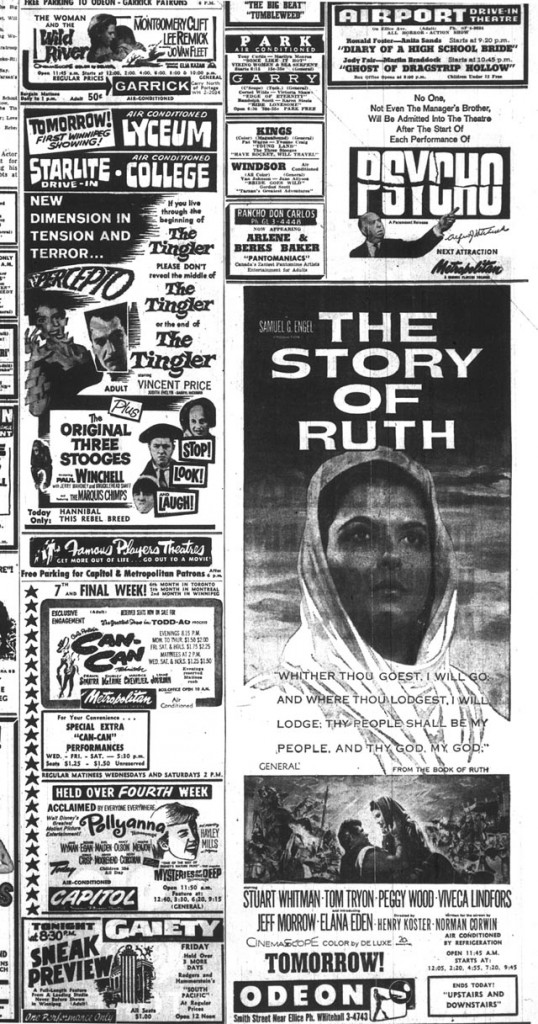 Truly scary: Percepto plus the 3 Stooges

It’s also interesting to see the strange randomness of exhibition back then. Double bills were still common, but what got paired with what is often surprising. At the Lyceum, opening August 12, 1960, The Tingler, touting Percepto, a “new dimension in tension and terror”, was showing with … The Three Stooges in Stop! Look! And Laugh! (1960, featuring The Marquis Chimps and Knucklehead Smiff). The Tingler was showing at the same time that Psycho (1960) premiered at the Metropolitan – an interesting juxtaposition, with old-style horror facing something new that was destined to replace it. That week, the Airport Drive-in was offering Ghost of Dragstrip Hollow (1959) as the bottom half of a double bill with Diary of a High School Bride (also 1959). Pollyanna (1960), Disney’s finest live action feature and a high point in Hayley Mills’ career, was in its fourth week at the Capitol. 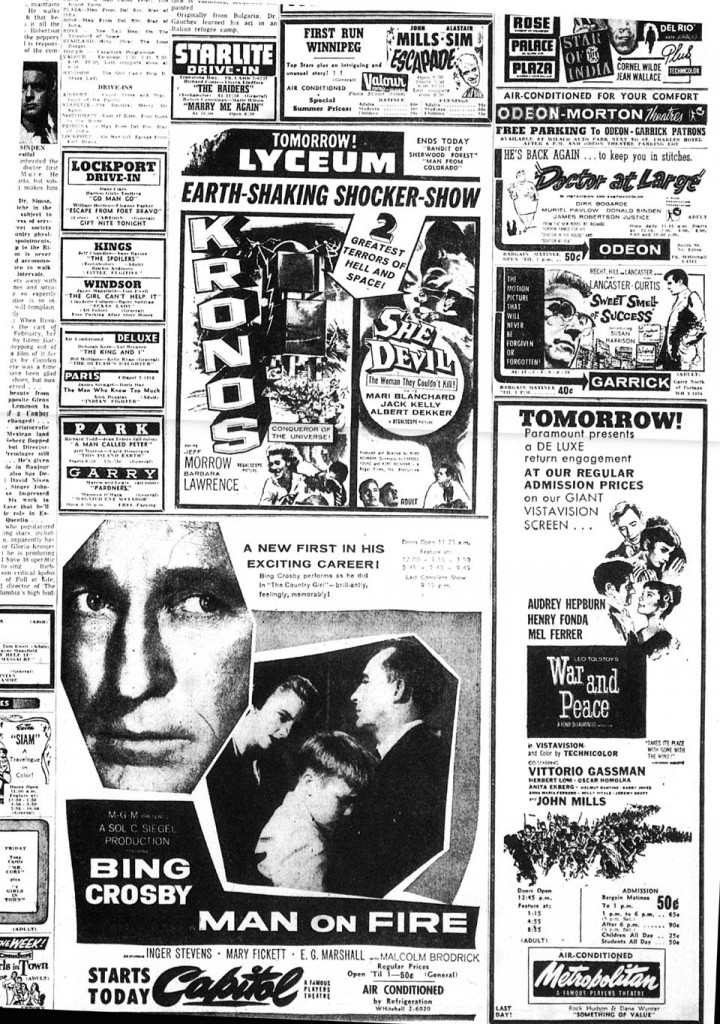 More appropriate, perhaps, was a Kurt Neumann double-bill, also at the Lyceum, opening July 5, 1957: She Devil (“The Woman They Couldn’t Kill”) paired with Kronos (“Conqueror of the Universe”), one of the more interesting ’50s sci-fi B-movies, about a giant metallic alien cube which comes to Earth to suck every drop of energy out of the planet. 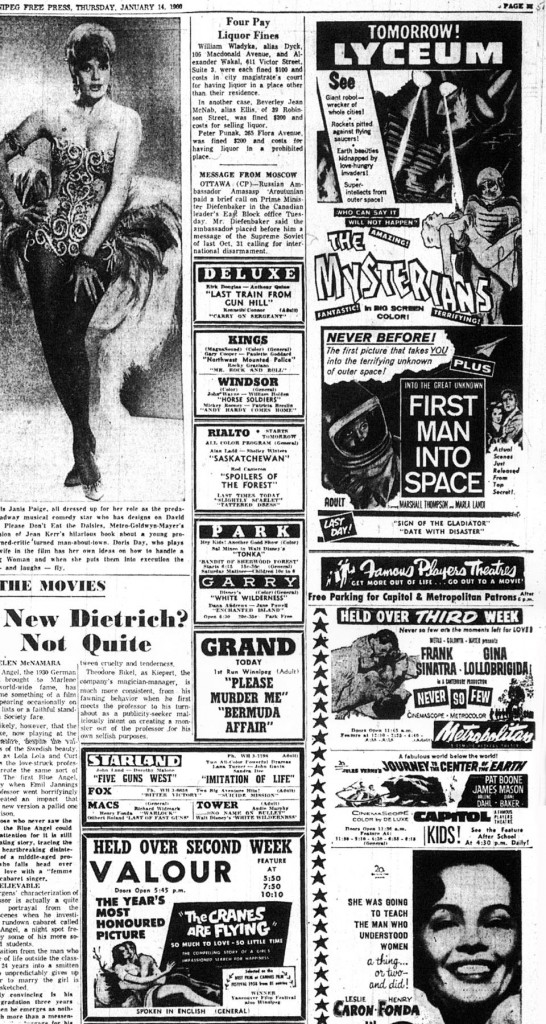 On January 16, 1960, again at the Lyceum (if I’d been living in Winnipeg back then, I think I know where I’d have been spending most of my time!), Ishiro Honda’s great epic The Mysterians (1957) landed (“Amazing! Fantastic! Terrifying! Who Can Say It Will Not Happen?”), paired with Robert Day’s modest First Man Into Space (1959), with astronaut Marshall Thompson bombarded by cosmic dust which turns him into a pathetic yet deadly monster (“The first picture that takes YOU into the terrifying unknown of outer space! Actual Scenes Just Released From Top Secret!”). 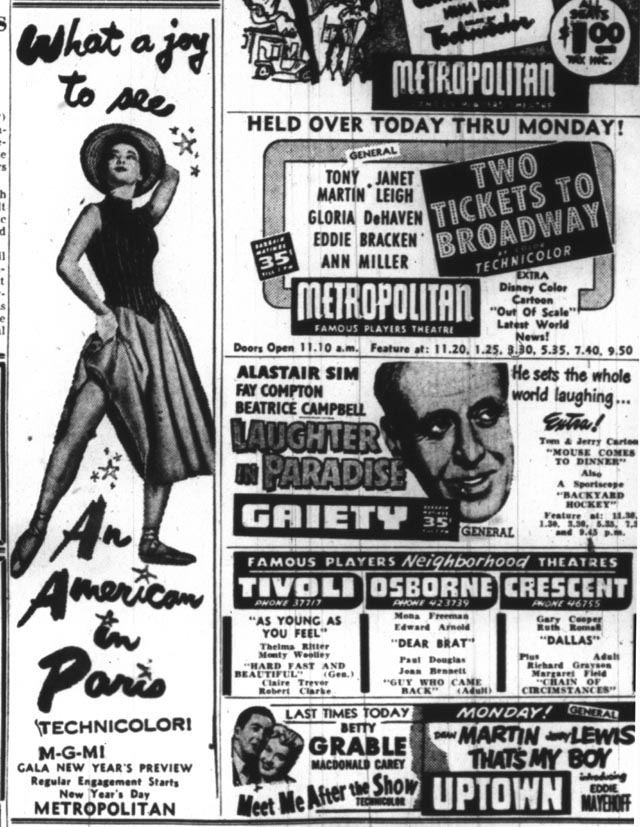 Oddly, while The Tingler played appropriately at the Lyceum, Castle’s earlier House on Haunted Hill (1959, “First film with the amazing new wonder EMERGO The thrills fly right into the audience!”) played at the elegant and prestigious Metropolitan, paired with The Cosmic Man (also 1959, “We could feel hypnotic eyes roving over our bodies … watching … spying!”). A far cry from high end Hollywood art like Gene Kelly and Vincente Minelli’s An American In Paris, the gala New Year’s Eve presentation at the Met on December 31, 1951 (“What a joy to see!”). 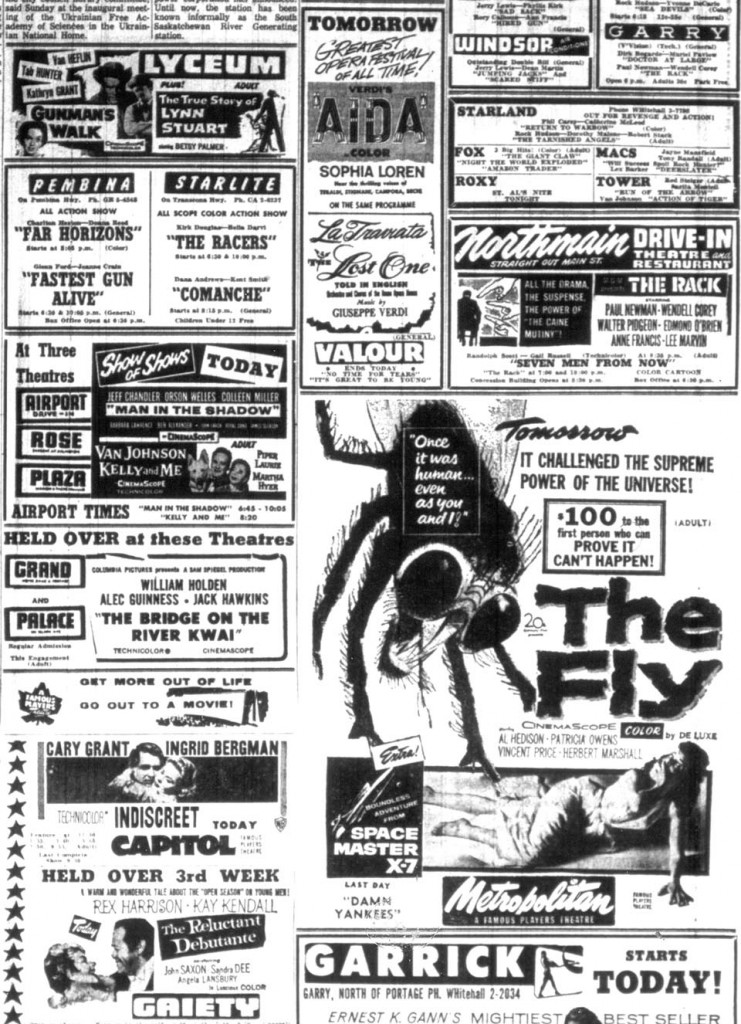 William Castle wasn’t the only one using gimmicks to sell movies. In 1958, although 20th Century Fox added some prestige to their production of Kurt Neumann’s The Fly (just a year after his Regal Films double bill), the ads prominently feature the offer of “$100 to the first person who can PROVE IT CAN’T HAPPEN!”. But does anyone remember the co-feature, Edward Bernds Space Master X-7? It sounds like a low-budget rip-off of The Quatermass Xperiment (1955). 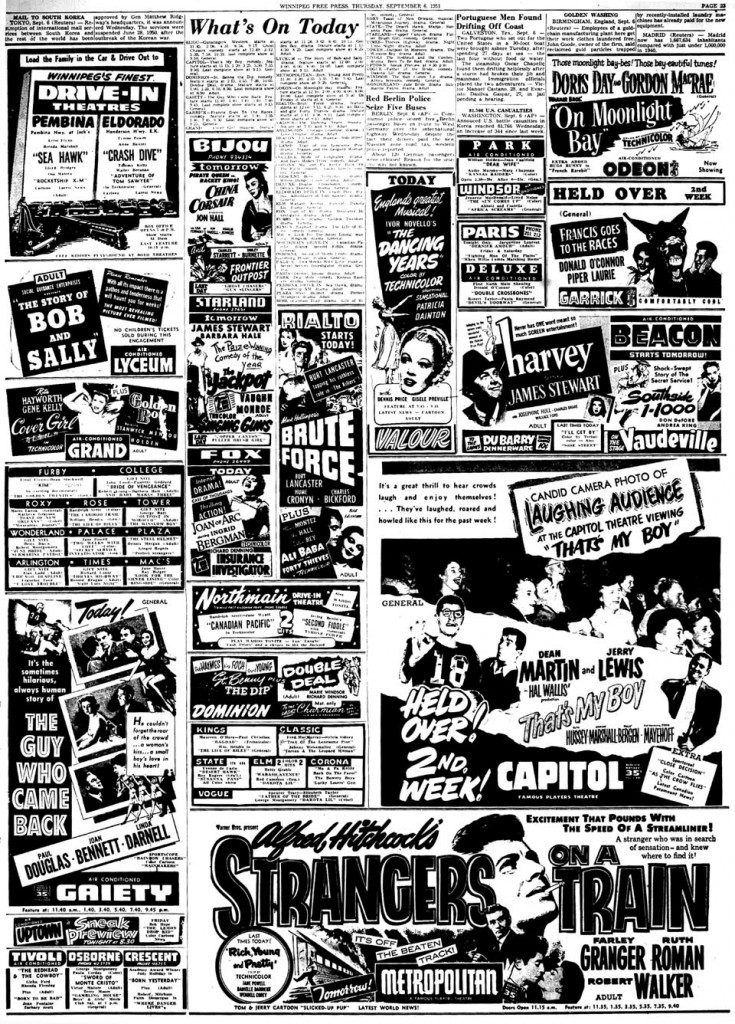 I know it’s not entirely rational, but it’s an undeniable thrill to look at a page of movie ads in which Hitchcock’s Strangers On A Train (1951) shares space with Jules Dassin’s Brute Force (1947, paired with Maria Montez in Ali Baba and the Forty Thieves [1944]); Rita Hayworth and Gene Kelly in Cover Girl (1944); James Stewart in Harvey (1950), the comedy about the giant invisible rabbit, paired with Boris Ingster’s Southside 1-1000 (also 1950, “Shock-Swept Story of The Secret Service!”); Doris Day in On Moonlight Bay and Donald O’Conner and Piper Laurie in Francis Goes to the Races (both 1951), the latter, second of six movies starring the talking mule made in five years, held over for a second week at the “comfortably cool” Garrick. 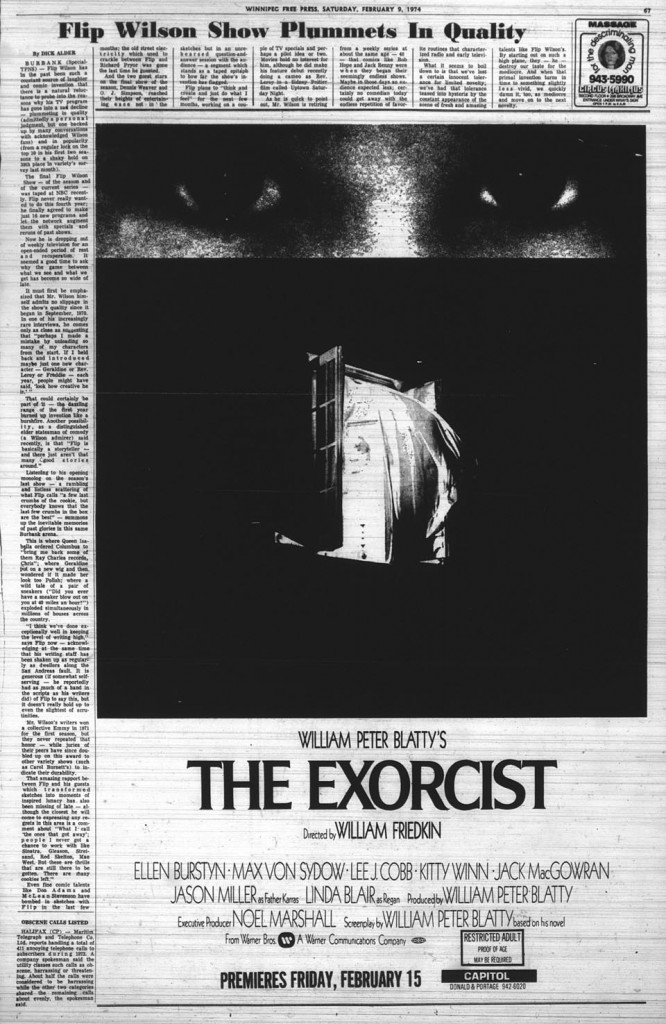 I had to wait about six weeks after reading the first reviews of The Exorcist (1973) before its arrival in Winnipeg was finally announced with a full-page ad on February 9, 1974. The following Friday, the 15th, I was in line on a bitterly cold day waiting to get into the first matinee screening at the Capitol (this project is constantly reminding me how much I miss that great theatre). The line-up went round the block, with people stamping their feet to keep from freezing, and everyone around me seemed to be working themselves up into a frenzy of anticipation, preparing for the scariest experience of their lives.

That’s why I was there too, of course … but unfortunately as the movie rolled on the huge screen I started to get the uncomfortable feeling that this was really nonsense. And that, despite the fact I’d really enjoyed the book. Somehow, seeing the story visualized just emphasized how ridiculous the whole demonic possession thing is. I mean, in a century which was marked by Stalin’s decimation of Ukraine, the Holocaust, two world wars and a bunch of minor ones, we were being asked to find proof of absolute evil in an adolescent girl saying “cocksucker”. The depths of the story’s conservative values came across as inadvertent comedy. So I found myself chuckling my way through it all, puzzled why people around me were shrieking and occasionally fainting. But maybe I lack an essential pop-culture gene – I also laughed at the ludicrous protracted parting scene on the ice floe at the end of Titanic … 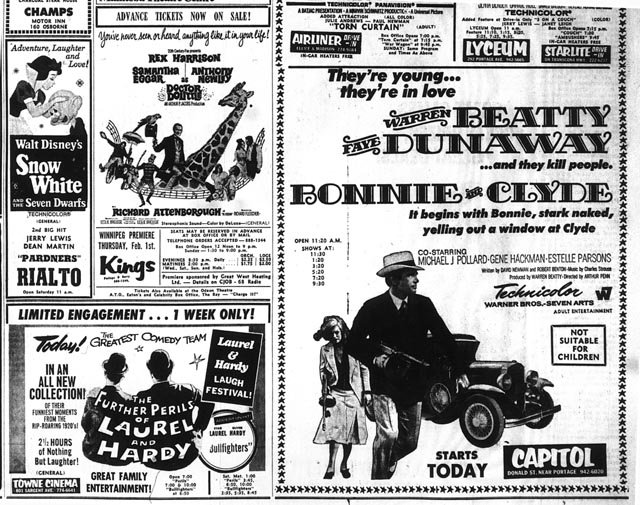 On January 26, 1968, Bonnie and Clyde opened the same day as Doctor Dolittle. Counter programming with a vengeance! But November 1, 1967, illustrates just how eclectic movie-going could be back then. Thoroughly Modern Millie with Julie Andrews was reaching the end of its run just as Peter Watkins’ sole studio-financed film, Privilege, was opening; the prestigious drama A Man For All Seasons (1966) was opening at the Odeon (apparently returning in the wake of 6 Academy Award nominations), while around the corner at the Garrick Born Losers, the first movie featuring Tom Laughlin’s Billy Jack, was arriving – the kind of low budget independent that was beginning to shake studio foundations. 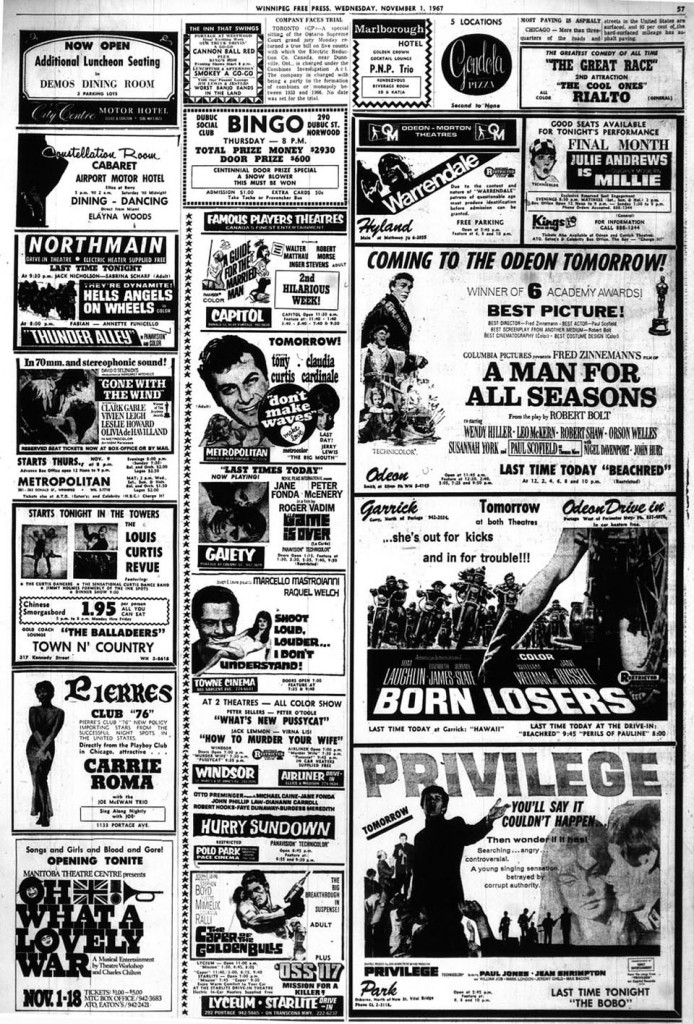 Meanwhile, Allan King’s documentary Warrendale was at the Hyland, Preminger’s Hurry Sundown was playing at Polo Park, and (this came as a surprise) OSS 117: Mission For a Killer was at the bottom of a double bill at the Lyceum and Starlite Drive-in. This 1965 movie was fourth in an on-going series based on what might look like a French James Bond rip-off, but actually predated Ian Fleming’s creation; the character was revived a few years ago in a pair of parodies directed by Michel Hazanavicius. 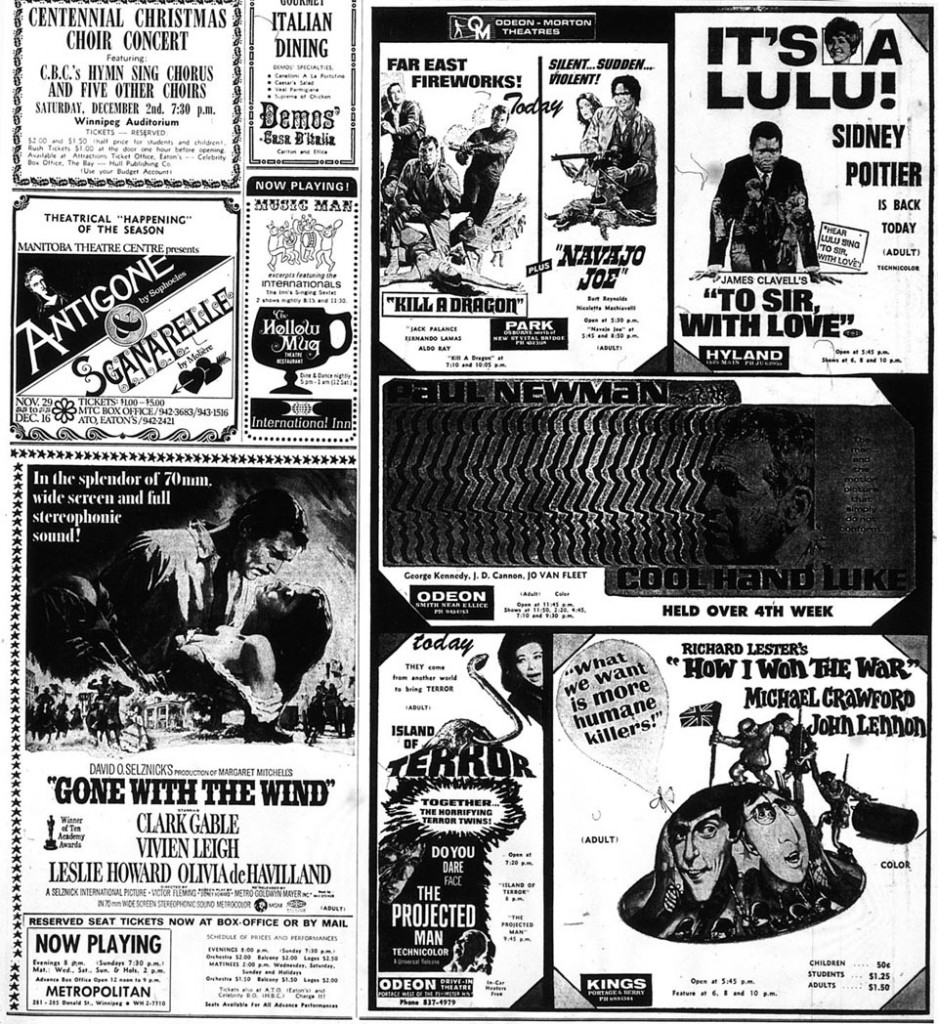 On November 30, 1967, Sidney Poitier returned in second run at the Hyland for another go-round in To Sir, With Love, while John Lennon was appearing in Richard Lester’s controversial (and not entirely successful) satire How I Won the War at the Kings, and Cool Hand Luke stayed around for a fourth week at the Odeon. But what really caught my eye was Terence Fisher’s Island of Terror (1966), an old favourite which I’ve only seen on TV, playing at the Odeon Drive-in with The Projected Man (also 1966), sole feature directing credit for British TV writer Ian Curteis. 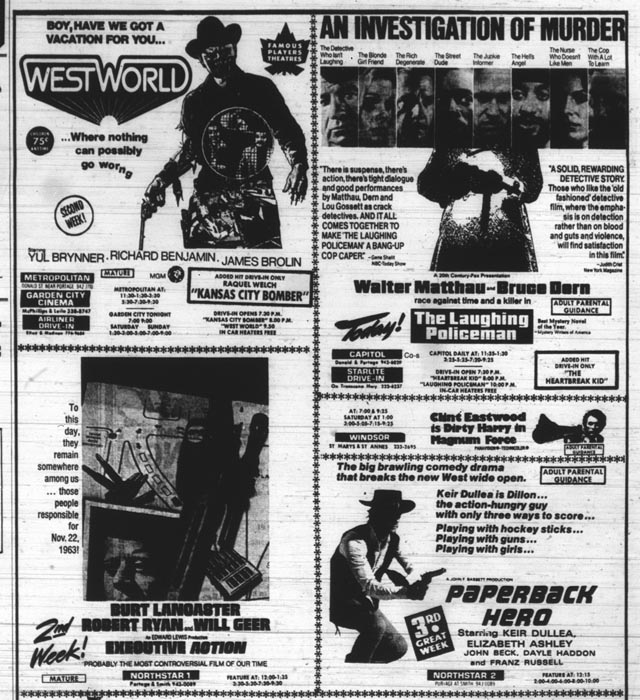 Finally, to put an arbitrary end to this random stroll down memory lane, on February 1, 1974, Stuart Rosenberg’s disappointing Americanized version of the Swedish mystery The Laughing Policeman opened at the Capitol, while Westworld (1973) was held over for a second week at the Metropolitan (paired with Kansas City Bomber [1972] at the Airliner Drive-in); David Miller’s dubious Kennedy assassination thriller Executive Action (1973) was held over at the Northstar 1 and, at the Northstar 2, Peter Pearson’s contemporary Canadian western Paperback Hero (1973, named for no particular reason after the Gordon Lightfoot song used as the theme, and retitled Last of the Big Guns in the States) was entering its third week. I think this was the first movie I’d seen Keir Dullea in since 2001: A Space Odyssey six years earlier. Set in a small Canadian prairie town, it toyed with the individualist myth of the traditional western in a modern setting – or, as the ad would have it, “The big brawling comedy drama that breaks the new west wide open.” It bears some strong similarities to Peter Carter’s much better The Rowdyman of the previous year, scripted by star Gordon Pinsent, in which a smalltown guy (in Newfoundland rather than on the prairies) refuses to grow up and become a responsible adult, causing tragedy. Still, it’s interesting to see a small Canadian feature (albeit with an American star) given as much prominence as the major American releases. 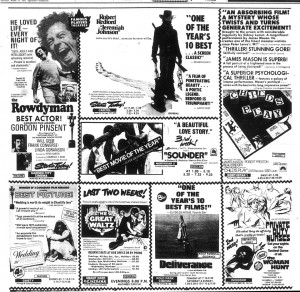