← More from Twilight Time
The Complete Jacques Tati on Blu-ray → 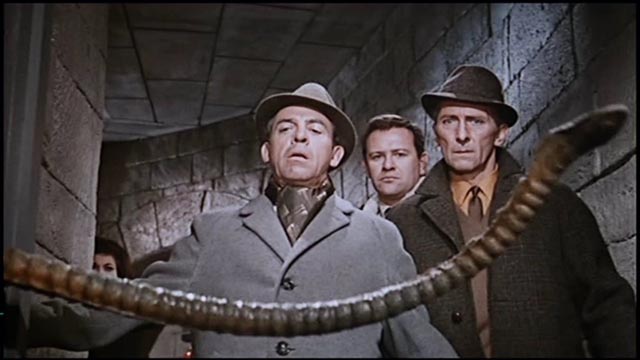 Something nasty in the basement: Peter Cushing and friends meet a silicate in Terence Fisher’s Island of Terror (1966)

For most of his career, Terence Fisher didn’t have much of a critical reputation. As a journeyman director in the 1940s and ’50s, he put out a steady stream of minor features, mostly B suspense movies, occasionally tossing off a small gem like So Long At the Fair (1950). Even after transforming himself and the landscape of British film with the seminal pair of Hammer Gothic horrors, The Curse of Frankenstein (1957) and Dracula (1958), he didn’t receive much critical attention; those films and the ones which followed were viewed more as Hammer product than the work of any particular filmmaker. But perhaps it had to be someone like Fisher, rather staid, somewhat conservative, who made those films – despite a certain degree of outrage and some chafing with the censors, and even considering what at the time struck many as offensively graphic imagery, there’s a paradoxical restraint, even tastefulness, about Fisher’s approach to horror which enabled Hammer to build on that foundation and create a mini-empire. That is, there was just enough in them to cause sufficient offence to generate lasting interest without turning off a large part of the audience and thus ensuring profits which guaranteed the studio’s pursuit of more such horrors over the ensuing decade. 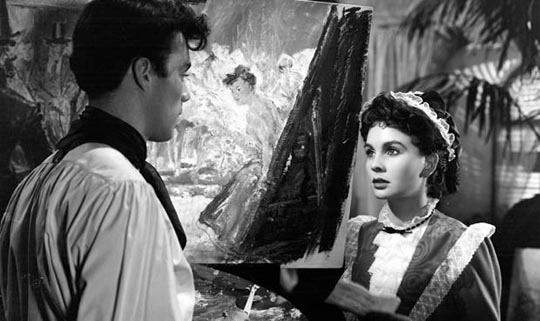 Dirk Bogarde & Jean Simmons: So Long At the Fair

As a child in England in the early ’60s, I was denied access to those Hammer films by the censor’s X-certificate, though I heard about them and saw clips on television which certainly whetted my appetite. But by the time I began to see them (initially, paradoxically, on television, beginning with Freddie Francis’ rather lame The Evil of Frankenstein [1964], Don Sharp’s atmospheric Kiss of the Vampire [1963] and Fisher’s excellent Brides of Dracula [1960] in the later ’60s – they were viewed more as kids’ movies in North America and were much more accessible there than in England), I found them as often as not a bit disappointing: back then, I preferred my horror more contemporary, less distanced by costumes and mannered acting. I recall an article by Harry Ringel in Cinefantastique (Fall 1975; Volume 4, Issue 3), arguing that Fisher was a classical Romantic, that his films were more about subtle emotions than horror, and asserting that here was an auteur and an artist. (According to Ringel, Fisher was a great admirer of Frank Borzage, while disdaining Hitchcock’s heartlessness: “Opposites in subject matter,” Ringel goes on, “Terence Fisher and Frank Borzage correspond where it counts: in emotional attitude. Fisher’s films take place quietly in the soul.”) I’m not sure I bought it all, but over the years, I have developed an affection for that rather staid approach which goes a long way towards naturalizing the supernatural and humanizing the horror. 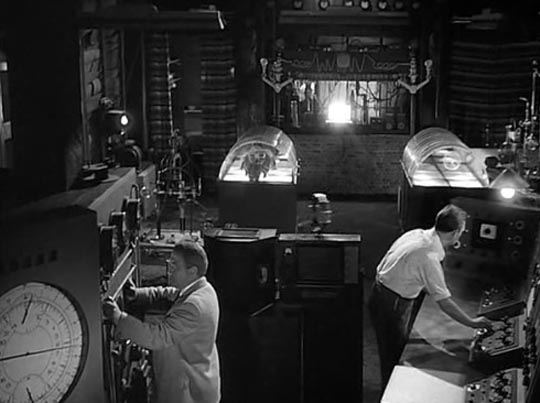 Given the prominence of the Hammer Gothic horrors, it’s not surprising that Fisher is almost exclusively identified with those movies. He was obviously temperamentally suited to the genre; it’s equally obvious that science fiction was never his forte, and yet before he established Hammer’s famous house style, he had previously done a pair of minor sci-fi movies for the studio. Spaceways (based on a novel by Charles Eric Maine) and The Four-Sided Triangle (from a novel by William F. Temple), both made in 1953, don’t have much of a reputation, and it’s true that Spaceways is a pretty dull story about scientists working on a project to put a rocket into orbit – the English equivalent of Destination Moon and Conquest of Space, but made on a much smaller budget. 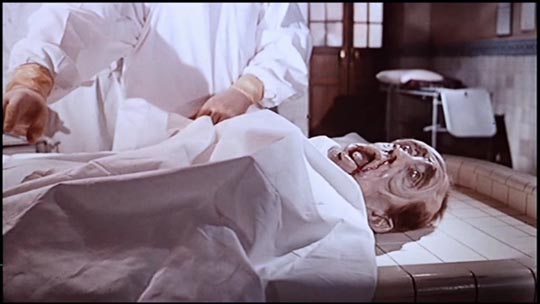 Perhaps what makes these two films interesting (even if just to a small degree) is their focus on characters and relationships rather than technology. Spaceways is more about a troubled marriage (and murder) than the space race itself; and The Four-Sided Triangle – a much better movie, included as an extra on Lionsgate’s region B Blu-ray of The Curse of Frankenstein – is about an attempt to use technology to resolve a complicated romantic situation. Two childhood friends grow up to develop a duplicating machine; when the girl they both love returns after years away and chooses one of them, the other persuades her to go through the machine, making a copy of herself so that he can have her too. Unfortunately, the duplicate really is identical, and like the original is attracted to the friend, resulting in tragic consequences. This is a quiet film, with a cosy English village setting which gives the story a naturalistic conviction. While these movies lack the style Val Guest brought to his Hammer SF films just a few years later (The Quatermass Xperiment, Quatermass 2, The Abominable Snowman … all based on television serials written by Nigel Kneale), their prosaic Englishness has a definite charm. 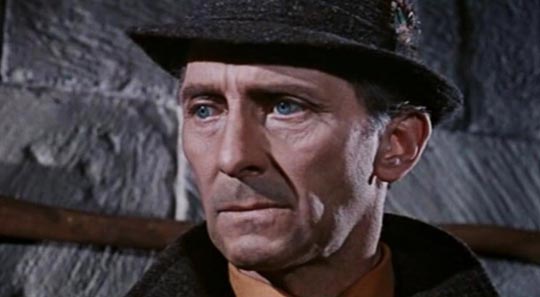 After seven years mostly devoted to horror following the success of Frankenstein, Fisher returned to science fiction in 1964 with The Earth Dies Screaming, a B-movie financed by notoriously cheap Lippert Films. Trying to stage an alien invasion on a shoestring is tough at the best of times, and here the effort is further hampered by a cliche-ridden script about killer robots and the re-animated dead. More successful were the pair of features Fisher made for the short-lived Planet Film Productions a few years later, both of which have recently been released on Blu-ray by Odeon Entertainment in England.

Island of Terror (1966) and Night of the Big Heat (aka Island of the Burning Damned, 1967) have very similar structures, both being set on remote islands where a small population find themselves battling for survival against a deadly sci-fi menace – medical experiments-gone-wrong in the former, alien invasion in the latter. 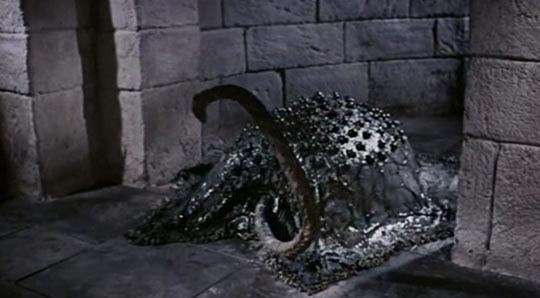 A creature perhaps only a kid could love

Anyone who caught Island of Terror on television as a child (as I did, on that small black-and-white TV in Newfoundland in the late ’60s) will have fond memories of it. The atmosphere is quite creepy, and the menace is effectively if cheaply realized: giant single-celled creatures bred in a cancer-research lab on the far side of the island, which use their long, snake-like tentacles to suck all the bones out of their victims, leaving shapeless rubbery corpses in their wake. With the “silicates” (based on silicon rather than carbon) dividing every six hours, a team of intrepid doctors – local MD Dr. Landers (Eddie Byrne), medical professor Dr. Stanley (Peter Cushing) and playboy bone specialist Dr. West (Edward Judd) – have very little time to figure out a way to kill the creatures. In classic movie fashion, things bred with radiation must eventually succumb to radiation. 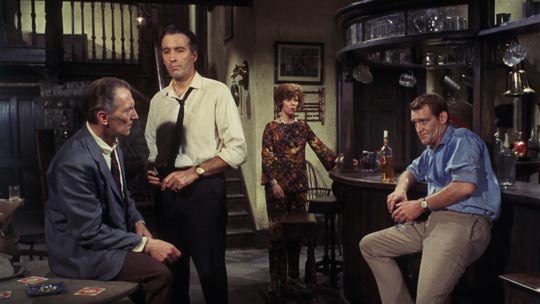 Meeting the apocalypse in a cosy pub

Producer Tom Blakeley tried to repeat the modest financial success of Island of Terror by repeating the formula the following year with Night of the Big Heat, adapted from a novel by John Lymington (which had previously been made as a television play by ITV in 1960). This production was troubled from the start with script problems causing funders to pull out, leaving a budget inadequate to the task of depicting the alien invasion. In many ways, though, Night is a better film than Island, with a strong cast and – as far as it goes – a more engaging story. As in Fisher’s pair of ’50s sci-fi films, the emphasis here is on the characters and their responses to the situation – a writer and his wife (Patrick Allen and Sarah Lawson, married in real life) who run the local inn and pub, the writer’s former mistress (Jane Merrow) who shows up to cause trouble, a mysterious and rather abrasive scientist (Christopher Lee) staying at the inn with a lot of suspicious-looking equipment (echoes of Griffin in The Invisible Man), and the local doctor (Peter Cushing). The story develops slowly as these people try to figure out why the island is suffering from a heat wave in the middle of winter and, once they discover the alien menace, figuring out a way to stop the invasion. But whatever the film’s strengths, it’s finally undone by the pathetically inadequate creatures revealed in the third act: these aliens, arriving here on Earth by materializing through radio transmissions, are nothing more than inert glowing blobs. Blakeley just didn’t have the money for the effects and decided that they didn’t really matter (something he admitted later on was a real mistake). 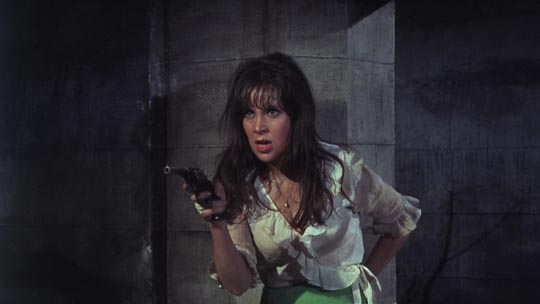 Jane Merrow dealing with the heat

Both films take their time to tell their stories, providing breathing room for the characters and their relationships, and their settings in small isolated communities combine a sense of vulnerability with an atmosphere of what I like to think of as cosy apocalypse – an English sub-genre epitomized by the books of John Wyndham and John Christopher. Death and destruction are played out in recognizable communities populated by ordinary people, giving the audience a frisson of danger accompanied by almost certain survival, at least for the few characters we care about.

One of the things which distinguishes these films from similar low-budget American genre efforts is the quality of the casts. In England, even stars like Cushing and Lee were essentially hard-working character actors, taking roles in movies which a “star” might think beneath them, and always giving committed performances; there was also a seemingly endless supply of excellent supporting players who give these films a serious, no-nonsense tone no matter how silly the stories might seem on the surface. 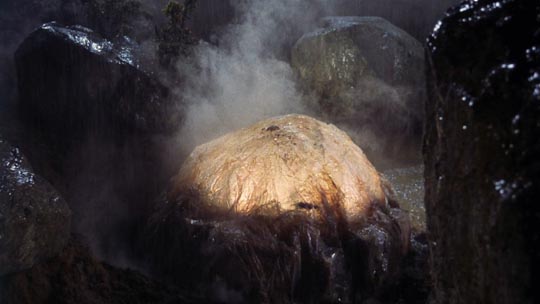 Night of the big disappointment?

Fisher followed Night of the Big Heat with a return to Hammer and one of his finest films, The Devil Rides Out (currently an object of controversy as the new restoration digitally “fixes” many effects shots which were accomplished optically in 1968 with uneven results; this kind of tinkering is rooted in the same kind of thinking which has caused George Lucas to ruin most of his own movies by obliterating the original and replacing it with “what the filmmaker really had in mind at the time”, even though at the time filmmakers were working with the technology that was available to them and doing the best they could with it – just imagine how much better Shakespeare’s plays would have been if only he’d had access to a word processor!). Then there were two more lesser Frankenstein features for the studio before the director died in 1980 at age 76.

Odeon Entertainment’s Blu-rays offer reasonable picture quality given the disposable low-budget nature of the movies. Colours are a bit weak, but both disks are an improvement over previous DVD editions. Night of the Big Heat carries over extras from the earlier DVD – an interview with Christopher Lee, and a chatty commentary with Lee and co-writers Pip and Jane Baker, which offers some interesting insights into low-budget genre filmmaking at the time, but often wanders off into digressions not really pertinent to the film. Unfortunately, there are no extras on the Island of Terror disk.