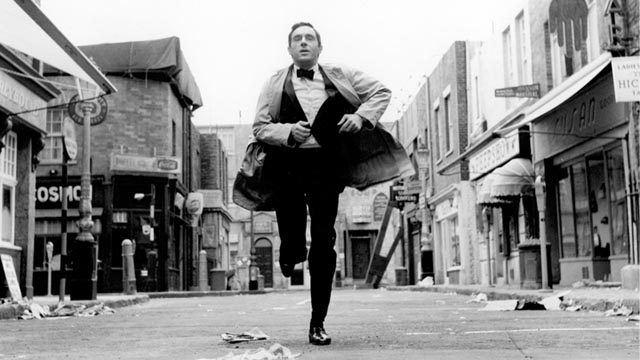 I love black-and-white. Partially this is an aesthetic thing, but I think there’s also an emotional component. A lot of my earliest experience of movies was gained from watching on a small black-and-white television (I had already left home in my late teens before my mother bought her first colour set). In fact, as a kid, I think I took it for granted that the past lacked colour. I’d see documentaries (like the classic BBC series about World War One, The Great War [1964], which I saw when I was nine) and history was always in black-and-white. It came as a shock, years later, to realize that people in the past had inhabited a world with as much colour as the one I lived in.

There’s an abstract quality to black-and-white; what is photographed is rendered in graphic rather than representational terms. Reducing objects and people and environments to various shades of grey renders whatever is depicted with a kind of purity which colour can’t quite match. Colour normalizes things. We see the world in colour and take this aspect of perception for granted; black-and-white, by stripping this aspect of vision away, enables us to see things in a fresh way. It reduces “noise” and enables us to see more clearly. 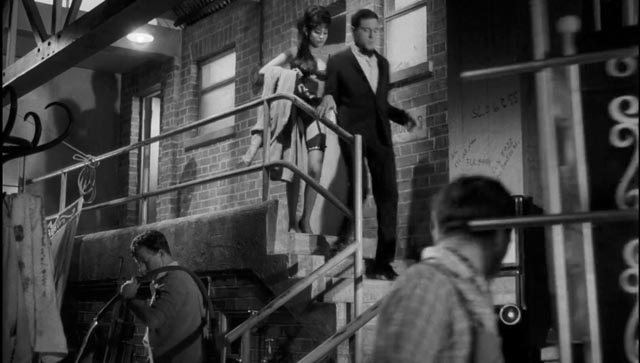 Backstage at the Soho strip club where Sammy works

When I was a child in England, movies were still mostly seen as double bills. Often, the main feature would be a big colour production, while the B feature would be a small, no doubt cheap, British movie in black-and-white. I’d see something like Genghis Khan (1965), with Omar Sharif, supported by a bleak little crime story running little more than an hour (the kind of thing Network has been turning out on disk in large numbers over the past few years in their series The British Film). These would be movies in which the people, the houses, the streets, the cars would be recognizable as akin to the world I inhabited. This may be an entirely inaccurate perception, but it seems that at some level colour represented the exotic, the fantastic, something far removed from ordinary life – Zulu, She, 101 Dalmatians – while black-and-white was somehow closer to reality.

This sense of reality is reinforced by the prevalence of black-and-white in documentary up through a good chunk of the ’60s – not to mention Neo-realism and the dynamic use of location shooting in post-war American films, particularly noir, which contrasted with studio-bound Technicolor. All of which simply points to the fact that concepts of cinematic realism consist of codes and conventions which have at best only a tangential connection with actual reality. (I have a friend who dislikes black-and-white films specifically because “we see in colour”, making black-and-white irritatingly unrealistic for him.) 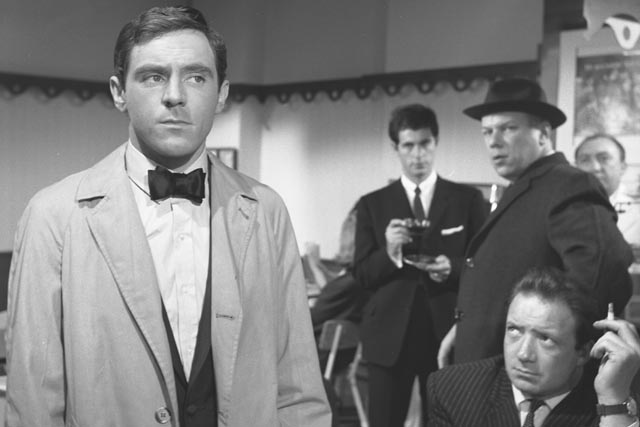 Sammy observed by the two enforcers sent to collect the debt

I tend to respond more to a stylized use of colour, a deliberate attempt to turn colour into an expressive graphic quality comparable to the effect of black-and-white – say the eye-popping look Jack Cardiff brought to the work of Michael Powell, or the feverish look of Dario Argento’s Suspiria or Mario Bava’s colour films. The fact is movies consist of a two-dimensional arrangement of visual elements which are composed by the filmmaker; they do not provide a direct experience of the world but rather an imaginative interpretation of the world (at best) or a mere attempt to produce a simulacrum of that world. The more thoughtlessly colour is used to produce such a simulacrum, the more the attempt diminishes the imaginative magic of the medium. 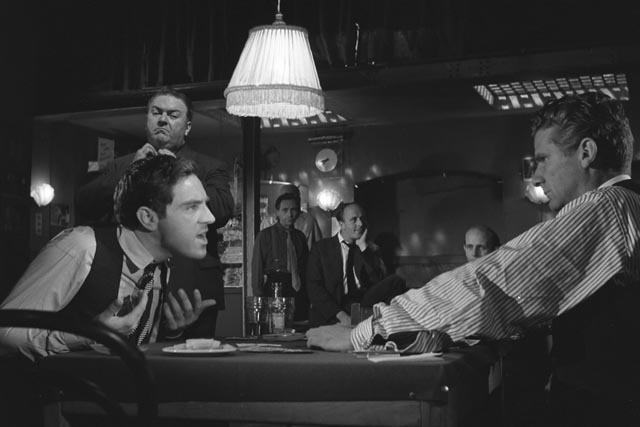 Sammy pleads for a break after an all-night losing streak

These thoughts were triggered by my recent viewing of Jack Garfein’s Something Wild (1961) and a disk I picked up on my trip to England. I knew nothing about the latter, Ken Hughes’ The Small World of Sammy Lee (1963), until I came across the Blu-ray in the new releases rack at Fopp on Shaftesbury Avenue. Hughes has never seemed like a prominent figure to me – I know him mostly as the director of The Trials of Oscar Wilde (1960), the musical fantasy about a flying car, Chitty Chitty Bang Bang (1968), and the dull historical slog Cromwell (1970), as well as one of the many directors responsible for the James Bond parody misfire Casino Royale (1967). So it wasn’t his name that drew my attention. Oddly, it was the name of star Anthony Newley, just below the “Brand new restoration” tag displayed prominently on the front cover. Which in itself is a bit odd, because as a kid in England I hadn’t much liked Newley, a popular singer and comedian as well as occasional actor; but then a few years ago I got hold of Network’s DVD of a six-part TV series from 1960 which Newley had co-created, co-written and starred in. The Strange World of Gurney Slade is a wildly inventive, surrealistic comedy which tangles TV and real life, performance and reality, in ways which prefigure Monty Python (1969-74) and, more surprisingly, The Prisoner (1967-68). 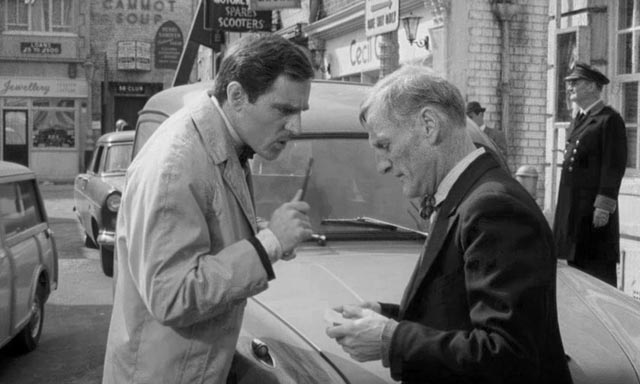 What sealed the deal for me was the blurb on the back of the Blu-ray packaging, which described a gritty crime story located in the sordid world of pre-Swinging Soho. When I got home and watched the disk, I wasn’t disappointed. From the opening title sequence, a series of shots tracking through Soho’s narrow streets in the early morning, with glimpses of pubs, restaurants and seemingly countless strip joints, I was hooked. These images, shot by the great Wolfgang Suschitzky in luminous widescreen black-and-white, immediately evoked a time and place long gone and yet very familiar. What follows this superb, compact scene-setting, is an intense, fast-paced narrative of escalating desperation and tentative, hard-bitten romance, scripted and directed by Hughes with a fine eye for social detail and individual character.

Sammy Lee (Newley) is a small-time entertainer with a regular gig as emcee at a seedy Soho strip club, his tired patter framing the performances which are all tease and very little show, the whole show existing to encourage patrons to buy overpriced drinks. But apart from being stuck in this showbiz dead end, Sammy also has a serious gambling problem. We first meet him at the end of an all-night poker game where he has had a losing streak leaving him £300 in debt to a gangster. It’s one of the film’s strengths that Sammy’s subsequent desperation revolves around such a seemingly small sum.

Sammy is given just five hours to come up with the money or face the violent consequences. After a humiliating visit to his brother Lou (Warren Mitchell), who is about to lend him the money until his wife Milly (Miriam Karlin) shows up and creates a scene, Sammy embarks on a remarkably elaborate and convoluted series of petty schemes, which gradually build on one another to generate the money he needs. All this is done by phone or in quick escapes from the club between shows, with the help of go-fer Harry (Wilfred Brambell), while simultaneously dealing with the arrival of Patsy (Julia Foster), a girl Sammy had a brief fling with on a recent tour up North. Patsy believes she’s in love with the “glamourous” entertainer, who told her he’d help her find work if she came to London.

As his schemes begin to fray and it looks like he won’t be able to find all the money in time, Patsy begins to seem like a promise of another possibility; Sammy can maybe escape with her out of London … perhaps an illusory fantasy, and yet not entirely implausible. The film’s ending is bleak yet hopeful, with Sammy finally gaining what may be a liberating sense of self-awareness. 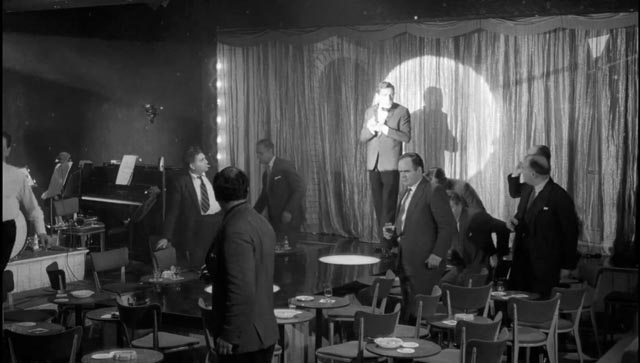 When things seem hopeless, Sammy turns against the customers at the club

Hughes has done a fine job in capturing the film’s milieu and the distinctly ethnic flavour of the East End while creating a convincing psychological portrait in Sammy – a man who has tried but failed to escape those ethnic and social roots, becoming bitter and cynical in the process. The contempt he so easily displays towards those around him, at the club both backstage and in the audience, is really an expression of self-loathing. It’s the trusting naivety of Patsy (not drawn as idealized innocence – her relationship with Sammy is explicitly sexual; he used her for his own amusement on his trip up North) which finally cracks that cynical armour and tentatively restores his humanity.

All of this is beautifully photographed by Suschitzky with the fine attention to documentary detail which is so characteristic of his work. (This film, among others, encouraged Mike Hodges to use Suschitzky on Get Carter eight years later.) The clarity of these black-and-white images strips away any possibility of nostalgia or sentiment, evoking the time and place within which the story is so firmly rooted. The Small World of Sammy Lee is directed with dynamic energy and filled with finely drawn characters, benefiting from a cast packed with great British character actors; it seems completely unlike anything else I’ve seen by Ken Hughes and perhaps indicates a path not taken as starting the following year he embarked on less personal, more “international” projects.

This Studio Canal disk, supplemented with interviews with actress Julia Foster and Mike Hodges, as well as a brief featurette about the locations, was the real find of my trip.

Other black-and-white features I’ve watched recently, and will be writing about at some point, are Robert Aldrich’s Hush … Hush, Sweet Charlotte (1964), Fritz Lang’s Hangmen Also Die! (1943), John Baxter’s Love on the Dole (1941), and Robert Wise’s Odds Against Tomorrow (1959).