← DVD of the week: War of the Arrows
Sabu and the Kordas → 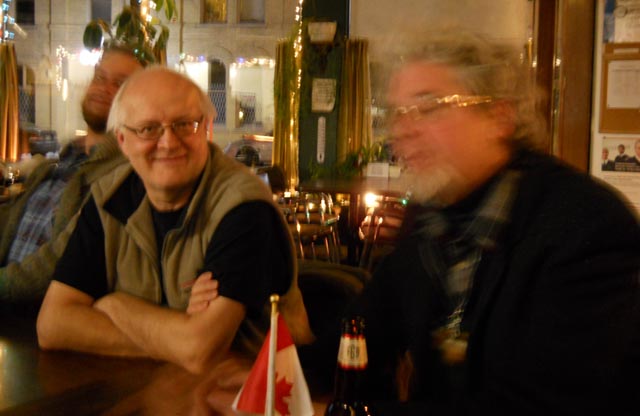 K. George hanging out at the Legion with Craig Baldwin, too lively to focus

I had an interesting evening last Friday, thanks to Dave Barber at the Cinematheque. Dave and his co-workers at the WFG brought Craig Baldwin in from San Francisco for a weekend workshop on found-footage filmmaking. I didn’t have time for the workshop itself, but did make it to the Friday night screening of Tribulation 99 (one of my favourite films), screened with the early short Wild Gunman, and introduced by Baldwin himself. The filmmaker, who earns a living teaching at UC Davis, runs the on-going Other Cinema experimental film program in San Francisco, and has his own DVD label (Other Cinema Digital) which puts out his own and other people’s experimental films …

Baldwin gave a long introduction to the screening, speaking about his philosophy of appropriation as an integral part of art creation and cultural development, his entire career having been a kind of crusade against the use of copyright to shut down creativity and communication, which are crucial for binding communities together. (Saturday night he was introducing his documentary, Sonic Outlaws [1995], about the Negativland/U2 copyright case.) Interestingly, he has never been attacked by copyright holders for using their material, even though he “quotes” extensively from many recognizable movies. 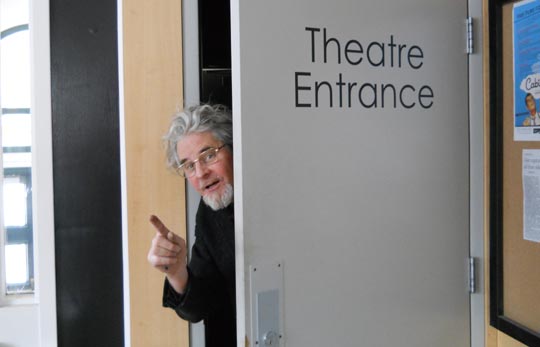 Craig Baldwin at the Cinematheque

He apologized for having to screen Wild Gunman from DVD as he’s an adamant film purist. The 16mm print of Tribulation 99 (1991) was in good shape and as breathlessly exciting as ever, though as he himself says, a younger audience will miss a lot of what it’s talking about because it’s so deeply rooted in a particular time and political situation, requiring quite a bit of prior knowledge on the viewer’s part to get the references which flood over you as you watch.

After the screening, I joined Baldwin, Dave and several local filmmakers (including Matthew Rankin, back from Montreal for a brief visit) and Film Group staff members for beers at the Royal Canadian Legion just down the block from the theatre. I spent a fascinating three hours in conversation with Craig. He’s remarkably like the films he makes, words spilling out of him as if he can’t keep up with the speed of the ideas scrambling to find expression. He talked about the purpose of the Other Cinema program, the difficulties of running a small DVD label, a bit about the project he’s developing now – a collage film about collage, featuring William Burroughs and Guy Debord … He also talked about the limitations of found-footage for expressing complex ideas and information, and the reasons for his increasing use of scripted and staged scenes in his later features, Spectres of the Spectrum (1999) and Mock Up On Mu (2008), despite the problems arising from inadequate budgets and, well, his friends’ limitations as actors.

Like most of the serious artists I’ve met, Craig Baldwin seems ambivalent about all his completed work and is focused on solving the problems of the next project. It was really refreshing to spend time with someone so passionate about what he’s doing, and whose interest is more in process than product – his movies are all acts of discovery …