As Felix Unger was fond of saying in The Odd Couple, “When you assume, you make an ass out of u and me.” Based on my experience of Paul Thomas Anderson’s previous films, which have been equal parts exhilarating and irritating, I didn’t bother to go and see The Master, which despite a lot of critical praise sounded like a festival of mannered acting.

It’s been apparent since his first feature, Hard Eight (1996), that Anderson is so enamoured of his actors that he isn’t willing to rein them in for the sake of the overriding drama. I became irritable about this tendency around the time of Magnolia, much of which I liked, but which overall was too overwrought, its moods unmodulated, its performances in perpetual high gear. It was even worse with There Will Be Blood, with Daniel Day Lewis cutting the ham thick enough to choke the audience. So the prospect of Philip Seymour Hoffman and Joaquin Phoenix going head to head in The Master didn’t seem appealing to me, and I assumed that the more critical reviews were the accurate ones.

And yet, seeing a copy of the Blu-ray in HMV for a reasonable price, I felt a sudden impulse to buy it … admittedly more for the inclusion of John Huston’s remarkable propaganda documentary Let There Be Light (1946) as an extra than for the feature itself. And despite a huge backlog of unwatched disks, I sat down to watch Anderson’s film as soon as I got home … and much to my surprise found myself riveted for almost two-and-a-half hours. In fact, it’s been a long time since I felt quite so engrossed by a movie.

To be honest, I’m still not quite sure what happened … or, in fact, what The Master is “about” in any literal or thematic way. The film creates a strangely hypnotic, immersive experience which has little to do with conventional storytelling, and yet it’s not simply a mood piece, an exercise in atmosphere; its details are precise and concrete.

The first thing to notice is that Anderson has pulled back from the overloaded busy-ness of his earlier work, the cramming of character and incident into unruly narratives. And with this, he has also banished the overblown symbols and metaphors – the rain of frogs in Magnolia, Dirk Diggler’s huge dick in Boogie Nights. The images in The Master (shot in 65mm) have a luminous clarity which, combined with long fluid takes, gives the film a sense of stillness, a meditative quality which seems not simply a repudiation of that earlier overcrowded busy-ness, but also a direct refutation of the hyped up, jagged editing and excessively kinetic camerawork which all but define modern mainstream movie-making. Here, Anderson achieves a formal classicism within which his characters can live and breathe.

And this is the essence of the film: rather than overwhelming the characters with technique, reducing them to mere component parts, The Master is a perfectly formed setting for the observation of two lives which collide, generate unexpected forms of emotional and psychological heat, and then drift apart again.

From a narrative point of view, little happens and nothing is ultimately resolved. But the process itself is endlessly fascinating. 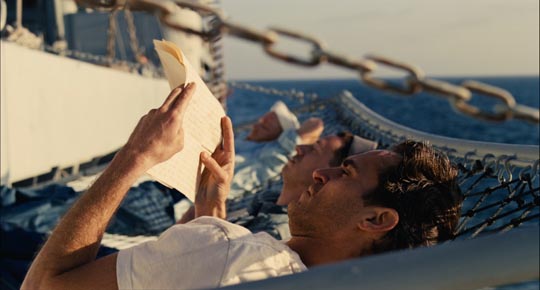 Joaquin Phoenix is Freddie Quell, a WW2 vet both physically and psychologically damaged by the war, his body twisted into a hunched, strangely simian question mark, his mind unable to connect properly with the people around him – his expression is one of permanent puzzlement as if he can’t quite figure out what being human means any more – and he’s prone to bursts of violence which seem oddly disconnected from anger, as if years of war have conditioned him to aggression as a natural state. 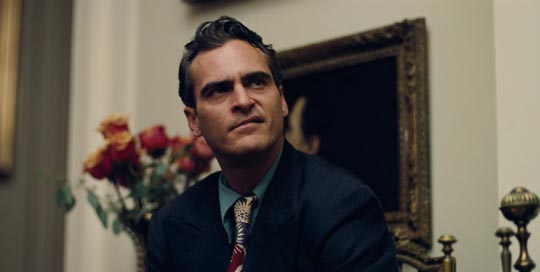 Purely by accident (drunk and disoriented one night, Freddie sneaks on board a yacht to sleep it off), he meets Lancaster Dodd (Philip Seymour Hoffman in a nicely understated performance), a character based on Scientology-founder L. Ron Hubbard. Dodd and his entourage are about to set sail for New York, but instead of kicking Freddie off the boat, Dodd is drawn to him, instinctively sensing in the damaged man a test case for his movement, the Cause. Dodd doesn’t believe that Man is related to Animal (as in Scientology, we are eternal intelligences trapped inside temporary earthly bodies) and here he finds himself confronted by a man who has seemingly reverted to animal form.

Freddie recognizes a good thing when he sees it and sticks around, sniffing around the edges of the Cause and looking for ways to benefit from what is obviously a very lucrative situation. 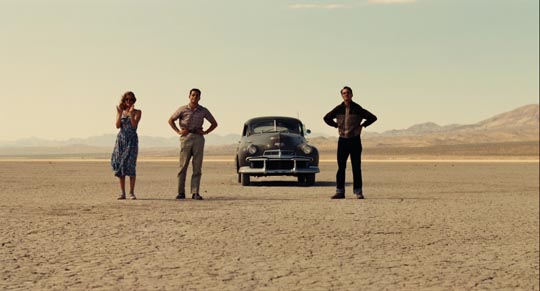 It’s intriguing that Anderson shows no interest in doing an expose of Scientology, nor really in satirizing Hubbard and his wacky ideas. In fact, although Dodd is clearly a charlatan (as his own son says to Freddie at one point, “he’s making it up as he goes along”), mixed in with the fantasy nonsense is a good helping of practical psychoanalytic technique and it’s clear that Dodd may actually be able to help some people with their problems … although he uses this practical element not as an end in itself, but as a means of shoring up the money-making scam of the Cause.

The core of the film lies in the fascinating back and forth between these two characters, each a mixture of the authentic and the false, but neither ultimately able to effect a lasting change in the other. As the Cause becomes bigger and more successful, Dodd loses interest in Freddie (who shows no signs of being “cleared” by the Cause’s techniques), while Freddie has to recognize that there’s no longer any profit to be made by sticking around … and so they drift apart.

There’s a psychological and emotional reality to The Master which transcends the requirements of mainstream narrative, but reflects the ways in which most of us experience life and the relationships which we pass through as we live it. While Paul Thomas Anderson’s previous work has been full of directorial flash and daring, with this film he seems to have achieved a calmly assured maturity, and in doing so has created the most richly satisfying movie of the past few years.

I regret that my assumptions about his work and where it was heading after There Will Be Blood kept me from seeing The Master in a theatre. I’ll certainly go if it gets a re-release, but in the meantime I know I’ll be returning to it on Blu-ray as one of those rare films I feel a need to revisit regularly.