DVD of the week: Duffer/The Moon Over the Alley 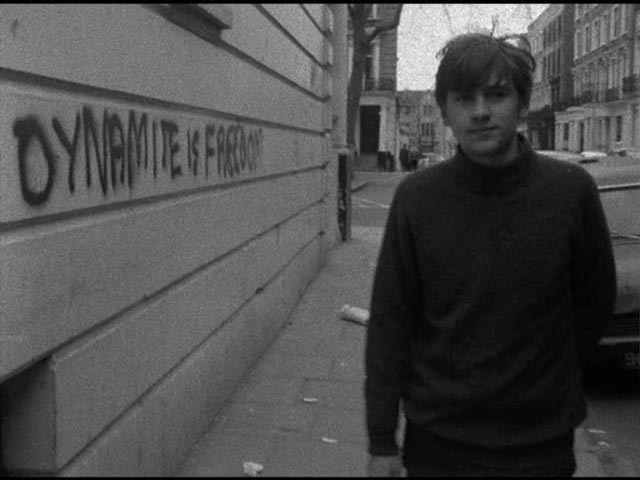 One of the real pleasures of the BFI’s Flipside series of DVDs and Blu-Rays is the sheer eclecticism of the choices being made available. The series’ mandate is to present fringe works, movies outside the mainstream. So far, we have gained access to early thrillers by Pete Walker (Man of Violence, The Big Switch); three excellent exploitation films by Gerry O’Hara (All the Right Noises, The Pleasure Girls, That Kind of Girl); the mondo documentaries London In the Raw and Primitive London; Don Levy’s avant-garde Herostratus; Peter Watkins‘ only studio film, Privilege; Richard Lester‘s least commercial comedy, The Bed-Sitting Room; Guy Hamilton‘s The Party’s Over and Barney Platts-Mills‘ Bronco Bullfrog and Private Road, illuminating documents of their time. 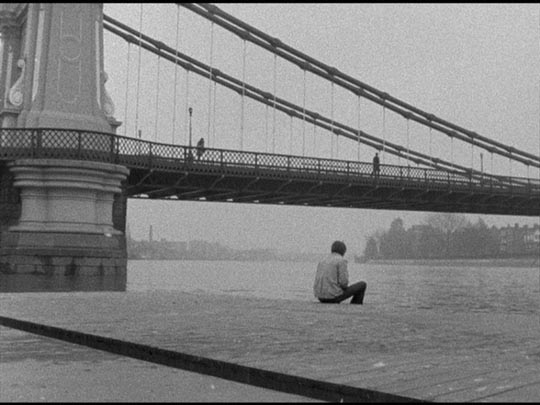 But none of these had prepared me in the least for the recent release of a double bill from the early ’70s by two Canadian expatriates, Joseph Despins (a documentary editor) and William Dumaresq (a writer and lyricist). I had not previously heard of these filmmakers, nor of the two films they made together: Duffer (1971) and The Moon Over the Alley (1975). This isn’t really surprising as both films are very low budget oddities; and yet their distinctive strangeness ought perhaps to have gained them some kind of wider reputation.

Duffer bears most of the hallmarks of the enthusiastic amateur; it was shot silent, with sound added later with little regard for the fact that while we do see the characters talking, what we hear seldom has anything to do with their lip movements. In fact, while the film is very text-heavy, almost all the words are presented as interior to the characters, mostly Duffer (Kit Gleave) himself, who ruminates, describes encounters and conversations, and offers an on-going critique of himself and his relationships with an older, sadistic man, Louis Jack (writer William Dumaresq) and Your Gracie (Erna May), a blowsy, maternal prostitute. 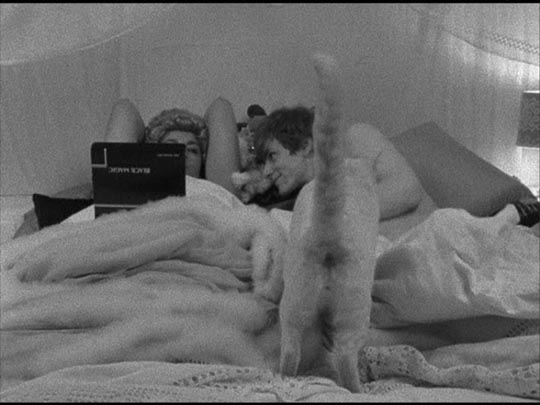 The story, what there is of it, is a strangely innocent playing out of a polymorphously perverse Oedipal triangle, with Duffer drifting back and forth between these two parental surrogates. Louis Jack inflicts humiliation and pain, which Duffer suffers with equanimity, his feeling being that he has no right to deprive the other man of his pleasures; these involve suffocation, covering Duffer with worms, filming him for cheap porno movies – and eventually roughly sodomizing Duffer in an attempt to impregnate him (Louis Jack despises women and seeks a way to bypass them altogether). This last act produces a kind of phantom pregnancy and finally results in the film’s most disturbing element; as Duffer’s perceptions begin to fracture, to the point where he is no longer sure himself of what is happening, he either steals a baby doll from a young girl or a real baby from a young mother, giving the doll/baby to Louis Jack with rather shocking consequences.

But as Duffer’s relationship with Louis Jack goes through its descending spiral into madness, he repeatedly seeks comfort in the warm, motherly arms of Your Gracie – explicitly commenting at one point that it’s not really like having sex with his mother (“She reminded me of my poor old Mum, though my Mum and I never had sex together; it never entered our heads!”), though of course raising the point serves only to confirm the actual dynamic of the situation. 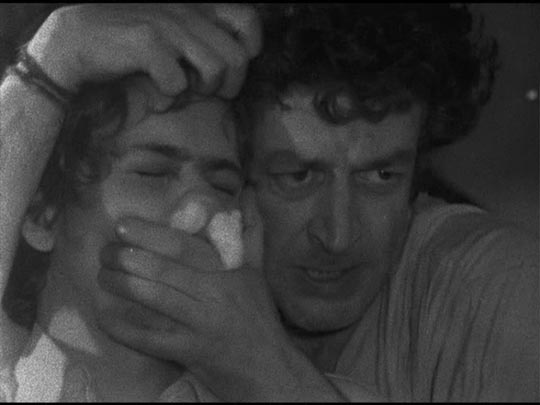 It eventually becomes apparent that the seemingly naive and vulnerable Duffer is more in control of the situation than it at first appears. When he balks at one point at Louis Jack’s attempt to smother him into unconsciousness, the older man is reduced to helplessness; it is Duffer’s submissiveness which holds the power in their relationship. In the end, his manipulation of the two “adults” results in a violent resolution which leaves him free and both “parents” dead.

Although obviously made with no money, Duffer is expressively shot in 16mm black-and-white by Jorge Guerra, and richly enhanced by a soundtrack reminiscent of David Lynch, thick with ambient tones mixing natural sounds with synthesized elements provided by the BBC’s Radiophonic Workshop, and some musical elements composed by fellow Canadian Galt MacDermot (best known for composing the musical Hair). 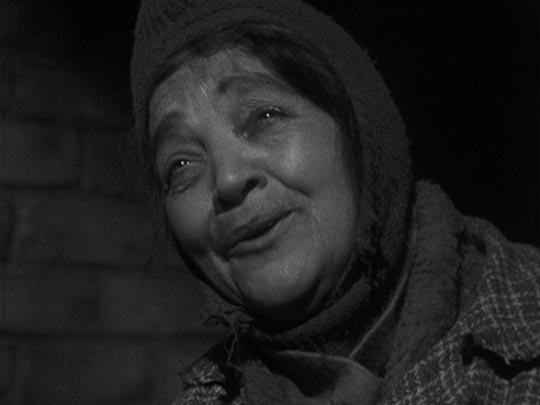 MacDermot took on a much larger role for Despins and Dumaresq’s follow-up, The Moon Over the Alley. A more polished film (shot by Peter Hannan, who went on to work with Nicolas Roeg and Monty Python, and later shot Withnail & I), supported by the BFI Production Fund, Moon is a deliberate nod to Brecht and Weill, a musical set in and around a tenement in Notting Hill on the eve of the street’s destruction for “urban renewal”. Apart from a chorus consisting of an elderly woman street singer and her simple-minded accompanist, who sleep in the alley beside the rooming house where most of the action takes place, most of the songs are embedded naturally within the action – the landlady singing along with the radio as she cleans, an immigrant mother singing a lullaby to her baby, a group of musicians jamming on a street corner at night (and being moved along by a constable). 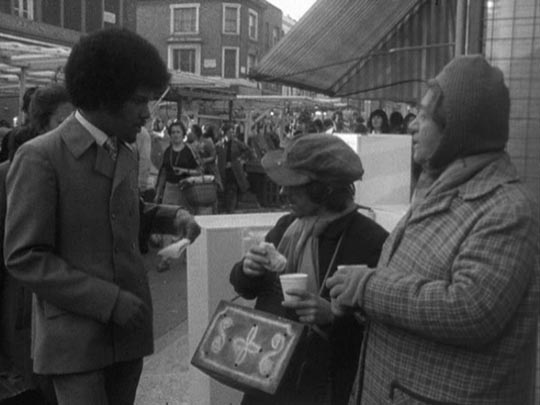 As the sexual content of Duffer is presented without comment or fanfare, the rich mix of working class and immigrant types in Moon is simply a given; the filmmakers are not making any particular political point, merely reflecting a community as it exists, comprised of poor people struggling to survive and make their way in a life which doesn’t have a lot to offer. But there is nothing sentimental about the presentation. There’s an Irishman working two jobs, hoping to make enough to marry his girlfriend; but he discovers that she’s started working at a Soho strip club because she’s tired of waiting. One of the rooming house’s residents is a silent old man who obviously has a penchant for young girls; there is a recurring gang of teens who gradually take on a threatening tone, eventually savagely beating the old man. But they hardly stand for some kind of self-correcting moral force in the community, as they also attack the film’s young romantic couple, a boy and girl whose parents disapprove of their relationship; Moon‘s brutal climax sees the gang (reminiscent of the droogs in Kubrick’s A Clockwork Orange) beating the boy savagely and raping the girl.

In their own distinctive ways, Duffer and The Moon Over the Alley offer images of London in the early ’70s which seem quite shocking today, both films devoid of any kind of self-censorship or accommodation to accepted standards of taste. As idiosyncratic as they are, they leave the viewer with the feeling that a certain reality, usually veiled, has been revealed. 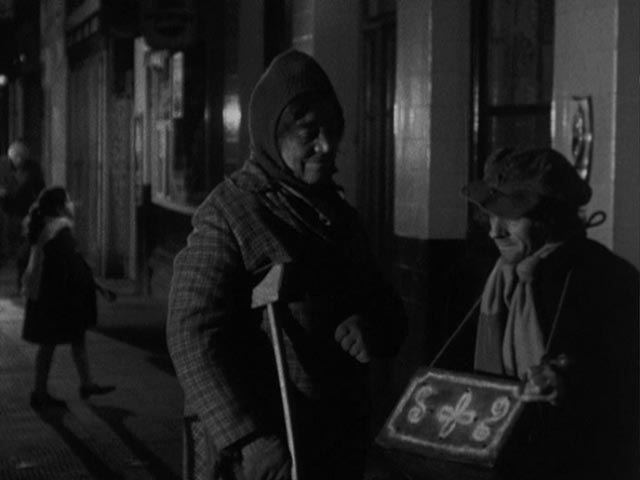 4 thoughts on “DVD of the week: Duffer/The Moon Over the Alley”