By coincidence, having recently finally caught up with Robert Young’s Vampire Circus, I’ve just come across a short film he wrote and directed six years later for the British government’s Central Office of Information. Twenty Times More Likely (1978) is a motorcycle safety film included in the BFI’s fourth volume of COI documentaries – Stop! Look! Listen!, a collection of the British equivalent of the educational and safety films made for North American high school students (available in a number of releases under the banner of Educational Archives, with one particular strand [driver ed] dissected in Bret Wood’s documentary Hell’s Highway). Maybe it’s because I was born English, but I find that a lot of the British films lack the campy flavour of many of these American films, possessing a grimmer, more dramatic tone. 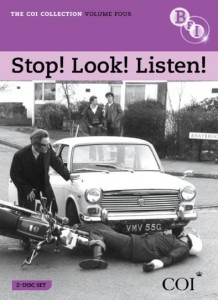 Young’s half-hour film is actually a teen drama built around issues of motorcycle safety. It stars Gillian Taylforth, who went on to a long, still-continuing career in television, including fifteen years on Eastenders; and Ray Burdis, who has also had a lengthy television career, as well as producing a number of movies, including Peter Medak’s The Krays and Philip Ridley’s The Reflecting Skin and The Passion of Darkly Noon. Taylforth is Sandy, a safety-minded girl taking a course in the proper handling of her bike, while Burdis is Alan, a cocky youth who isn’t interested in being told what he should or shouldn’t do. Sandy is attracted to him, but irritated by his immaturity. On the day she passes her test, he again tries to show off by speeding away from her up a hill and disappearing over the crest at high speed. Cue the sound of a crash. 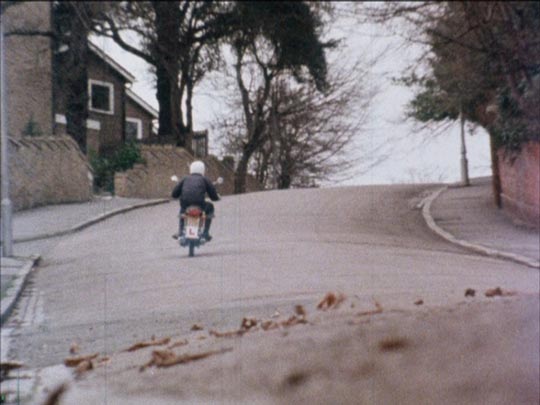 Sandy takes off after him and discovers a group of people standing around Alan and his fallen bike at an intersection where he apparently ploughed into a car. As she reaches him, he opens his eyes, grins, and hops to his feet, the crowd dispersing with comments about his stupidity. Soon after, Sandy discovers that he has signed up for the safety course; she’s still angry at him, but his change of attitude begins to soften her and their mutual attraction develops. But then Alan signs up for some dangerous dirt bike trials and she starts to fear his recklessness again. 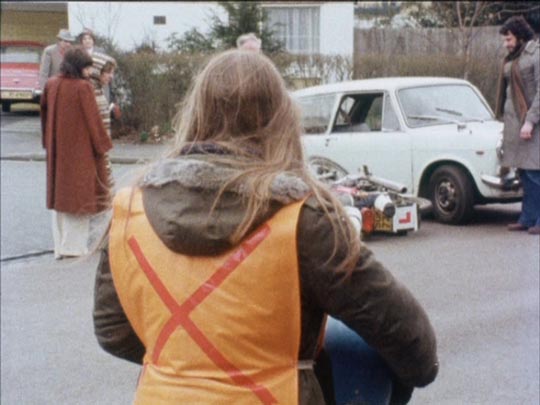 The dirt bike sequence becomes disorienting through Young’s fragmented editing, disconcerting cuts which begin to confuse the physical and emotional space of the film; the narrative line begins to break down and we gradually realize that this is because Sandy can no longer sustain what turns out to have been an alternative storyline conjured up in her mind in denial of what really happened on that hill – and the film ends with her looking down at the crushed bike, Alan’s face covered in blood, his dead eyes staring at nothing.

What makes the film more than merely a tut-tutting, finger-wagging exercise in trying to convince teenagers to behave responsibly is Young’s ability to convey the message through an emotionally engaging story about a couple of characters who have more than two dimensions. Taylforth and Burdis both have charm and actually breathe life into their characters and the unstable emotional connections between them, making the film work as a mini-drama and not just a cautionary educational message. 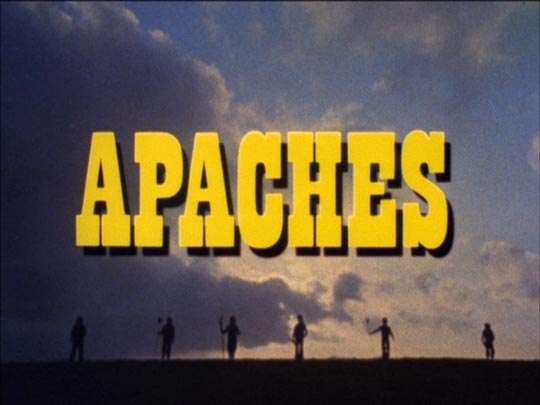 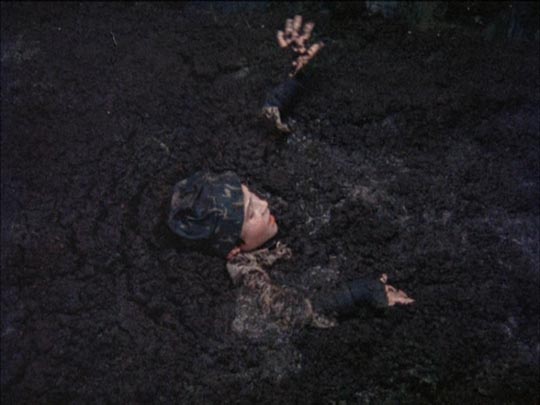 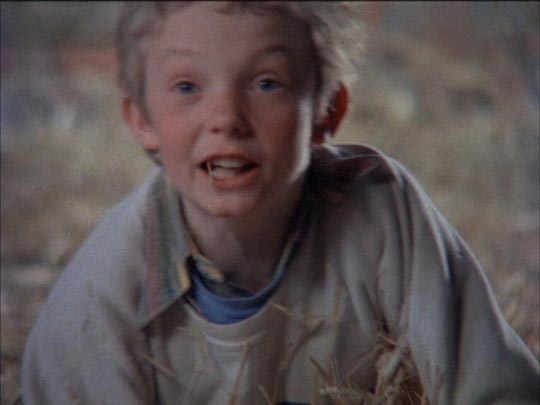 Gillian Taylforth later had a small role in John Mackenzie‘s gangster classic, The Long Good Friday (1980). This same BFI COI set also contains a half-hour short by Mackenzie, called Apaches (1977), made just three years before his big screen breakthrough. A startlingly grim, well-crafted half-hour, Apaches is safety film as horror movie. Six kids play successive games of Cowboys & Indians and Cops & Robbers in the countryside around a small picturesque village and a farm. One by one, as they play their life-and-death games the kids die in extremely graphic ways involving farm equipment, unlabelled chemicals, a manure pit, falling objects, etc. The film assumes an almost surreal tone as the games continue after each death, while intercutting with preparations for a “party” that 11-year-old Danny, the group’s leader and the film’s narrator, comments on; he speaks about the joylessness of adults’ idea of fun compared to the excitement and adventure of the kids’ games … Danny himself is the fifth and last of the kids to die, the party being a sombre family meal following his funeral. Over images of the silent meal, a lengthy list of kids’ names and ages scrolls up the screen: all of them died in farm accidents during the year preceding the film’s release. 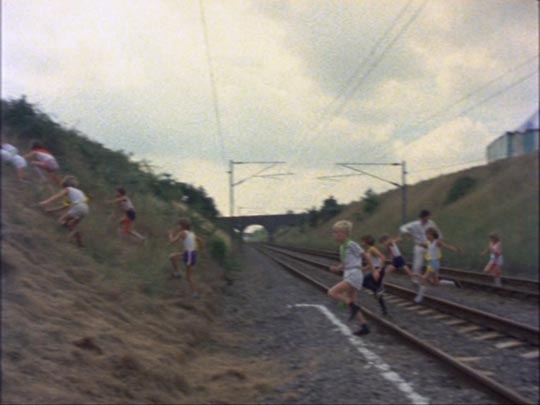 This reminded me of another safety film I saw a couple of years ago, John Krish’s The Finishing Line, included in the 7th volume of the BFI’s British Transport Films series, The Age of the Train. In that controversial short, several hundred schoolchildren take part in a “school sports day” which consists of a number of fatal activities around a railway line: playing on the tracks, throwing rocks at passing trains, going into dark tunnels out of which speeding trains emerge, etc. All of these dangerous activities result in much blood and death, with officiating adults awarding prizes as if at a regular track meet. Although the film was shown on TV and carefully presented in some schools, it was banned by many other schools because of its combination of black comic fantasy and graphic mayhem … 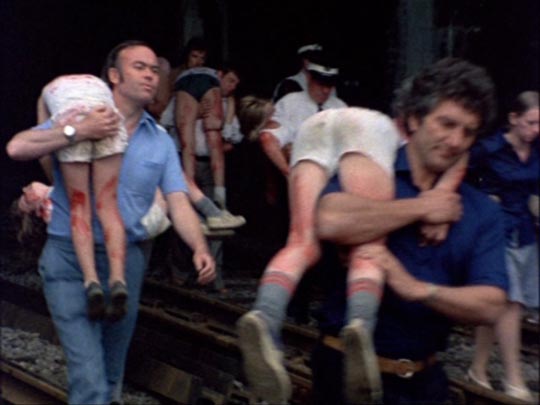 As an aside, I should mention that in the past decade the BFI has been releasing a gold mine of material for documentary fans, creating a vast library of films on DVD ranging from the ’20s to the present. Various departments of the British government have had their own film units over the years and while there was obviously to some degree a propaganda purpose behind these, many of them attracted talented and innovative filmmakers (anyone involved in filmmaking can appreciate the prospect of a steady income). In addition to the recent series of COI releases, the BFI has issued no less than nine sets of British Transport Film unit shorts, amounting to more than forty hours of material from one of the finest of the production units (these consist not only of training films for railway personnel, but also tourist, history, safety films and even social commentary, the quality often raising them far above the level of “industrial films”). 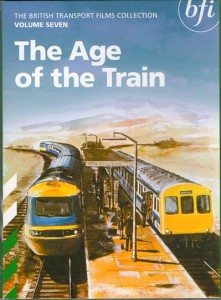 There are also three sets of films from the GPO (General Post Office) film unit, which go far beyond merely promoting the Post Office’s services, presenting a kind of social portrait of the late days of the Empire, including Basil Wright’s The Song of Ceylon, the theme of which producer John Grierson described as “Buddhism and the art of life it has to offer, set upon by a Western metropolitan civilization which, in spite of all our skills, has no art of life to offer.” 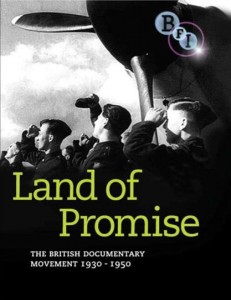 On the industrial front, the BFI has released compilations of British Coal Board films, and an upcoming set of documentaries about shipbuilding; a collection of sex education films ranging from anti-VD tracts from World War One to fairly graphic depictions of sexual behaviour in the ’70s; a series of nature shorts from the ’20s and ’30s; a complete set of the films presented by the Free Cinema movement in the ’50s and early ’60s; and two massive sets, Land of Promise and Shadows of Progress, which together provide a rich overview of the British documentary movement from the ’30s to the late ’70s.

Personally, I can’t get enough this material and I wish the National Film Board of Canada would treat its own seventy year library of documentaries with this kind of care and respect.