Anatol has backed off considerably about the script – I don’t know why.  Seems to accept that if I can sell it, it’ll be up to the producer who directs.

Greg Gubi likes it (with a few reservations about specific points); Eric really likes it.  I gave a copy to Everett McGill today (there’s a part in it for him).

Somehow – I don’t know how – I seem to have written something good.  The responses are not just a matter of politeness – they’re very positive.  It doesn’t seem to be a run-of-the-mill script.  I’m amazed.

Eric threw out an excellent suggestion at lunch – David Bowie for the drug dealer in the script.

They hooked up a U.S. pay channel here at the hotel last week.  So now I find myself watching the tube a lot – last week, Brimstone and Treacle and a few bad films; just now Dragonslayer – I still love it.  Coming up next month, both Mad Max and Road Warrior. 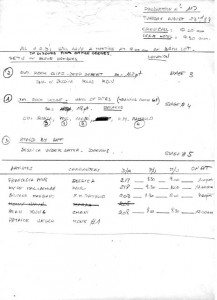 I have to retype the script.

It’s not completely “in format” and Leslie Werner told me today that a lot of people won’t even read such a script – take a look then put it aside because their poor little eyes can’t follow a slightly different form.  A dreary job.

An interesting indication: Leslie offered to type it on her word processor in return for a part of it.

Of course I’m not giving any of it away – but that someone who’s been in the business for years is interested in getting a piece of the script is perhaps a promising sign.

Everett gave back the script yesterday.  He was most effusive about it – praising my skills – suddenly very friendly.  I’m amazed at the respect this thing is gaining me.

He wants to get together to talk about it.

Anatol, for some reason, has become very resigned about it – I wasn’t that obvious, was I?  He’s talking openly in terms of other people directing it. 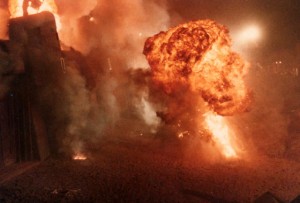 We were back at Aguilas Rojas, the garbage dump, for night shooting again yesterday (tonight as well) – I actually felt a kind of fondness for it.  And for all the waiting yesterday, it wasn’t as uninteresting as those nights back in April – there was a spectacular battle scene with huge naphtha explosions.

Patrick Stewart wants to read my script – I left a copy at his hotel this afternoon.

Another good night Friday at Aguilas.

For some reason, a lot of people have been getting a bit nasty with us – saying we’re never around, implying that we haven’t been working here.  Even David has made a few comments about hardly ever seeing us.

Sammon showed up Friday evening – with a recut convention piece.  Edited out of all the tapes Armstrong took back.  Despite his assurances, they’re running and working with the masters, not duping the material.

Just sat through Cimino’s Heaven’s Gate – the uncut version.  Beautifully produced – but the script was dreadful, completely unfocused.  If it’s supposed to be about class struggle, the capitalist establishment crushing the poor immigrant proletariat, why is two thirds of it concerned with the passionless love triangle involving Chris Walken, Kris Kristofferson, and Isabelle Huppert?  And for all the length, the characters are never given any depth.  The elaborate prologue becomes meaningless because it’s completely detached from what follows – after dominating it, John Hurt becomes totally extraneous throughout the rest of the film.  As for the epilogue, it’s even less connected with what went before.

Penny Shaw, by the way, was one of the assistant editors. 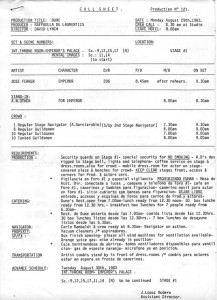 Moira likes the script.  And I’ve given a copy to Molly.

I spoke to Armstrong this afternoon.  We can forget about remaining to cover the model work.  And I suspect – though it’s hard to decipher his evasive manner – that we can forget the editing too.

I’m sending a copy of Café Universal to the WGA West to get it registered – a necessary precautionary measure. 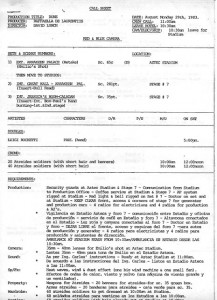 The wrap will probably be sometime next week.

We got an interview with Kyle this morning.

We’re all a bit down.  I’m afraid Anatol and I have pretty well accepted that next month will be the end for us.  If it becomes apparent that we’re not going to edit, that Armstrong just wants us temporarily to show him around the material, I’ll tell him to find his own way and leave.  I’ve got to find a place to go and live – neither the States nor Canada. 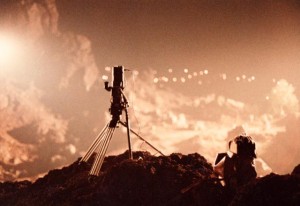 When my friend Tim arrived from Canada, I stopped writing the journal and spent much of the final two weeks of the production showing him around the studio and introducing him to people. We spent the last week in Mexico touring the Yucatan in a rented car, then returned to Canada with a one-day stopover in Chicago, where I handed the photos for the Eraserhead article to Fred Clarke.

Two months later, I made a quick trip to visit Jack Leustig in Los Angeles, before flying to England where I lived for the next year, with a three-month break traveling in Europe during the summer. Jack represented my script for a while, but needless to say it remained unsold and unproduced. I first saw my article in print when I bought a copy of Cinefantastique in Munich; it looked quite impressive, though some of the text had been cut, and occasionally my wording had been altered in irritating ways. It ended up taking almost two years to get paid the small fee I earned for the effort.

I briefly connected with David Lynch again in London, where he was using a studio to do some ADR for Dune, and also met up with John Dykstra while he was supervising effects work for Tobe Hooper’s under-rated Lifeforce. But on the whole, what connections I had made on Dune all eventually lapsed. The most enduring was with Jack Nance, for whom I wrote a script while in Europe. We got as far as meeting with a representative of Oklahoma oil money – a truly bizarre 24 hours in Las Vegas, which turned out to be a dead end. Jack was on and off the wagon over the next few years, moving from one place to another and I eventually lost touch with him as well … it was a shock to read in the papers of his strange, sad death in December 1996.