Well, I couldn’t make the copies today – I got up to page twenty-seven and the copier broke down.  Nothing personal, I hope.

I actually took the plunge this evening and went to a movie (theatres here are awful).  By myself.  Peter Yates’ Krull.  Awful.  Dumb script, leaden direction, horrendous costume and set design.

Six people involved whom I now know personally – two actors: Freddie Jones and Francesca Annis – and four on the crew: Andrew Kelly (now on Kit West’s crew here), Ken Warrington (now doing the plates for opticals on Dune – taking over from Apogee’s people), our very own Kuki Lopez Rodero (David’s A.D.) and Vicente Escriva who has just left us without warning because of some argument with Raffaella.

Although the effects are generally pretty poor, there is one sequence – David Allen’s crystal spider animation – which is really very good.

On the whole, for all its twenty-five-or-whatever million dollars, it looks remarkably like a cheap Italian sun-and-sweat epic (an impression much aided by the dismally handled monster-villain, “the Beast”).

I’m glad going to movies here is so cheap (about 60c US).

Witnessed an incredibly stupid decision at the studio yesterday.  Second unit was doing a major effects shot – the wall of the Emperor’s ship being blown out on Stage 5.  Sections were pulled away by cable, followed by air cannons firing debris and gas jets sending up a wall of flame.  (Later, the Baron is to be composited in, flying out through the hole as he dies.)

The set was constructed a couple of months ago with this effect in mind.  It took all morning to rig it.  They got one take before lunch – it had to be cut short because it almost started a fire.  They set about rigging for a second take.  Almost three o’clock, rigged to go – and in rushes Tony Masters – “we want it changed; a bigger hole, the pillars have to go too….”  Now, all of this would essentially require rebuilding the set.  A lot of money.  Raffaella is away until Wednesday – so the decision to throw all that extra money in can’t be made yet.  So, the logical thing to do would be to do the second take as is, have it in the can just in case, since it’s all paid for already (it was ready to shoot).  But instead, Pepe Lopez said, no, scrap it.  So if Raffaella when she gets back says she’s not spending all that extra money, they’ve still got to waste money setting up the shot again they were ready to shoot yesterday.  I can’t understand the way these people think.

Did fuck all today.  We went out this morning to do some shopping.  Got back in time for lunch.  After lunch, lingered a bit – then Anatol and I went to a movie.

Called Possession, it was made a few years ago in Berlin by a Polish director called Zulawsky, in English, starring Isabelle Adjani and Sam Neill.  It’s one of the wildest films I’ve ever seen, brilliantly directed, superbly acted (Neill is incredible; Adjani has never been better).  The camerawork had me squirming in my seat in ecstasy – I don’t think there was a dull shot in the film, very few conventional shots – Zulawsky keeps the camera moving almost constantly – but it’s never annoying or gratuitous – generates a perpetual tension as the film gets more and more insane.  It’s the closest experience to Eraserhead I’ve come across – but far different – instead of David’s careful, stately elegance, Zulawsky is wildly energetic, almost crude – but for all his explosiveness, he’s as controlled as David, obsessed with details, tiny mannerisms, quirks of character.  I haven’t been so thrilled by a film in ages – despite the scratchy, broken print, the intermittently disappearing sound, often inaudible dialogue.  I have to see it in a good print.

Carlo Rambaldi is here for a few days, doing something with the sandworm.  We’ll interview him possibly tomorrow.  Actually, we could almost justify going to Possession because Rambaldi built the creature Adjani gives birth to which eventually becomes Neill’s doppelganger.  A nice piece of work it is too, though little seen in the film.

Anatol didn’t show up with the car, so I wound up riding in with Rambaldi and his assistant.  Talked a bit about Possession, and some of his other work. 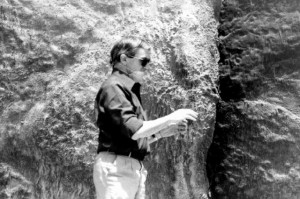 We took the camera out to the backlot this morning where Rambaldi was detailing the large worm segment (using a whole lot of condoms to create tissues and tendons).  He gave us a little impromptu interview, part English, part Italian, with his assistant (Bruno) acting as interpreter.  We had quite a chat with him – he’s articulate, communicative about his work, very friendly.  We’ll continue to cover him; next week the third-stage navigator is due to arrive from L.A. – sixteen feet long, requiring twenty-five people to operate it.

John Schlesinger, in Mexico to shoot a movie called The Falcon & the Snowman, stopped by to see what was going on and chatted with David Lynch. 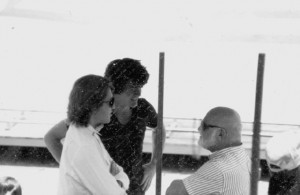 My script has now gone to four people – Anatol, Fred (with Leslie to read it after him), Pablo – and Bob Kocourek of Patsa – though I gave it (a mistake) to Marie to deliver to him and apparently she’ll pass it on to him after she’s finished with it (which at her speed could be weeks).  I was really pissed off when I heard that (from Bob) because he’s a production connection – in other words, business.  She’s just a spoilt brat.

We took off for lunch in Coyoacan sometime after one.  Anatol and Marie in her car; Pablo and me in his.  We lost them when she made an illegal turn.  For which we were both grateful.  Pablo and I wound up at a restaurant where we proceeded to have a seven-thousand peso lunch.  (Including two bottles of wine.)  After which we went on to catch the afternoon show of Possession.

This time I followed much more of the dialogue, caught most of the surface action.  I was surprised at just how fast it sweeps along (it seemed very long yesterday).  I absolutely love it.

Adjani is strange – sometimes in a film she seems beautiful (Adele H.); other times I find her rather unattractive (The Tenant) – in Possession she’s simply gorgeous.

Well, Anatol just called.  Says he likes the script – though he thinks it would be hard to sell to an American producer.  My response is: so what?  I’d prefer to make a European film anyway.

We’ve done very little all week – and now the three of us are planning to get away next Friday morning for three days in Acapulco, if possible (reservations may be a problem).

Meanwhile, Anatol has had enough of Marie – the constant bitching and complaining have finally gotten to him – maybe.  He vacillates a lot.

Pablo likes the script – read it through twice yesterday evening.

Fred’s reading it.  I gave a copy to Kyle this morning (I’ll get one to Jack Leustig through him in a few weeks).  And Bob Kocourek seems interested in reading it (if Marie ever lets go of the copy she took).  Greg Gubi also wants to read it.

I may run off a few more copies – give one to David.

It looks as if Fred has just been pushed out of the film. – he seems resigned to it.  After all the shabby treatment, the constant taking of his equipment, making it impossible to shoot, it seems he’ll be leaving in September and whoever remains will take over all the elements he was to shoot.

There are also rumblings of problems between David and Raffaella, that she’s starting to put responsibility for all the delays and problems onto him – nothing, of course, to do with her ineptitude as a producer.

Heard why Vicente has left: apparently his brother, married to Raffaella’s sister, broke with the company in New York and left with his wife – so the whole Escriva family (including a sister also employed by Dino, and Vicente himself) have simply ceased to exist for de Laurentiis.

Just called Tim: he should have his passport next week.  So, barring unforeseen problems, he’ll come down the Monday of the week after next (the day I get back from Acapulco – if I go).