Saturday we got a very good interview with Kit West.  I’m finally beginning to see a few things which actually can be cut together. 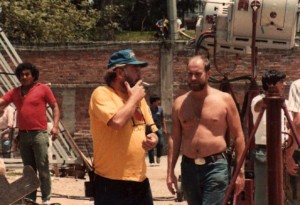 Effects supervisor Kit West (l) with one of his crew

Today, we went to Azteca Stadium where Jimmy Devis’ unit was doing a shot with a foreground miniature.  Devis is very cooperative – in fact, invites us in and makes suggestions. 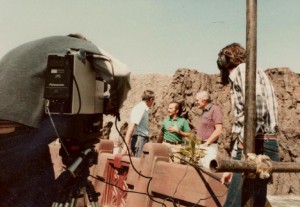 On returning to the studio, we went to the backlot where David was preparing to film the full-size worm segment.  We covered that from all angles, then wrapped.

Fred likes the script – as a first draft.  He spoke to Anatol – I haven’t talked to him yet – and what I got second hand was very positive – but he thinks it’s very sketchy – characters have to be filled in (Pablo said the same).  For me, the characters have to be filled in by the way they’re portrayed, defined by the action.  I don’t want to load them with expository dialogue.

Apparently Kit West told Raffaella he was quitting last week.  He didn’t leave – but he’s not happy with the way things are.  His crew is stretched very thin – and now he’s apparently having to do things Rambaldi contracted for (Rambaldi’s baby worm for the water ceremony is just a dead lump of rubber – Kit’s people had to hollow it out and install mechanisms to give it life) – apparently Rambaldi’s known for this kind of problem.

Kyle read the script Friday evening (like Pablo, twice in one sitting) – liked it, but was baffled by the politics.  A response which baffles me – the politics are generalized, abstract – not referring to any particular real situations, but to various attitudes which should be clear from the characters’ words and actions.

He passed the script on to a friend who’s staying with him.

I took another copy to Bob Kocourek – Marie still hasn’t finished the one I sent originally – she reads a few lines here and there in between doing tasks in the office.  It’s no wonder she has trouble following it; she doesn’t know how to read.

Just finished Lorenzo Semple’s adaptation of Bester’s The Stars My Destination.  A passable script with some very clumsy bits – but the tone isn’t right.  It’s too soft, jokey at times – as if Semple were trying to get a Vonnegut feel into it.  It should be harder, grittier, yet more poetic.  Considering what Semple did to King Kong in the remake, I’m surprised at how seriously he treats this material – but it’s still not enough.

Yesterday was a bust.  We were ordered to follow yet another tour of the studio – foreign press – and got awful footage – no light, bad sound … and Strick treating us like lackeys.

To our surprise, Francesca popped up in the afternoon and asked if we still wanted an interview, had we changed our minds … she seemed quite eager to do it.

Had dinner with Fred Monday evening – good long chat.  He really likes the script.  Would like the artist clarified a bit – and other characters identified more securely (just for reading – he doesn’t think much extra dialogue should be put in).  He’s already thinking in terms of how to realize it visually.  A very favourable response.

Bob Kocourek knows people at Handmade Films (they do the Python movies and others, such as The Long Good Friday).  If we can get the script to them through him, even if they aren’t interested, it might reach others through them who would like this kind of thing.

Anatol spoke to Armstrong yesterday.  We’re to pack up and ship out the moment principal photography finishes (around the second week in September supposedly).  Then, meetings in L.A. to decide what’s next.

David seemed a little shocked when we told him today.  Strick was surprised.

Another dead day – we didn’t do a thing.

Two interviews lined up for tomorrow – Bob Ringwood (who’s reluctant) and the obnoxious Alicia Witt (child genius) and her bizarre family.  Then both Pablo and I are splitting early – he with his family to Cocoyoc, me to Acapulco.

Meanwhile, Anatol has broken with Marie (at last) after interminable squabbles and her constant bitching.  She finally brought back the little stories she borrowed at the same time as the Eraserhead article (that came back a few days ago) – but only after photocopying them.  She’s so bloody possessive – didn’t even ask first.

I’m not looking forward to tomorrow, the interview with the Witts.  I just finished reading a bunch of clippings about the kid – who supposedly spoke at one month, read at nine months, memorized and quoted Shakespeare before she was two, read college textbooks before she was three, plays piano, writes stories and articles (and, her mother says, types a hundred words a minute) … and is in telepathic communication with her mother … a real-life Alia, a monster born with total consciousness….

How the fuck can I talk to her – or rather to the family?  We have to “discuss” the whole thing first with the parents – to make sure we won’t be “negative”.

Well, here I am, sprawled on the floor of a hotel room in Acapulco half-drunk after the two-for-one happy hour. 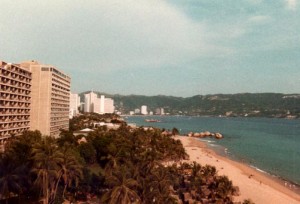 View from my hotel room in Acapulco

Bob Kocourek read the script – and flipped.  He reads a lot of scripts for his job – ones already slated for production – but still, he loved Café Universal.  Looked at me, rather surprised, and said, “You’re a great writer.”  Also said I should definitely peddle the script around.  Though it needs a special producer.  In his estimate (and that’s his job), it’s fairly expensive – over five million.  The cheapest way would be with a French director and crew.  Which brings me back to Anatol.  I really don’t think he can do it – he’s already coming up with “ideas” I don’t like (Eric read it, liked it, told Anatol it has everything but religion – so Anatol wants to stick in a group of nuns crossing a street, the light changes, they have to pick up their habits and run – like a can-can chorus – which has nothing to do with anything, won’t fit anywhere, would be a cheap laugh (?) which, Anatol says, “says it all about religion” – with judgment like that, his involvement would be the kiss of death).  I have to get a copy to Jack Leustig – and hope he really does have contacts in France.

Meanwhile, Bob is going to think about who best to get in touch with.  (He passed a copy on to Moira, production manager on Conan II – I’m not sure why – except perhaps to expand the possible circle of contacts.)

Just had a very brief chat with Tim – he won’t be coming Monday – probably late next week or the week after.