Ups and downs, crises and annoyances, problems and what have you.

Anatol just “missed us” on Sunday – but he doesn’t trust Jack anyway.  And Gordon’s a nice guy – he promised we’d do well on this deal, and so there’s no reason to think he won’t do well by us….

I’m beginning to wonder about my judgment; why do I feel comfortable with Jack?  David doesn’t like him, doesn’t want him anywhere near the book.

I think I’m going to wind up stiffed on the article, stiffed on this video project, lost as far as the book is concerned – Jack seemed like a security blanket – but everyone I’m involved with shuns him.

If Jack does manage to put together a production deal on my script, he won’t be able to work with Anatol (and frankly I have nothing now but doubts about Anatol’s abilities) and there would be no way to get David involved because of Jack’s involvement.  I could end up alienating a bunch of people (with Anatol it wouldn’t matter so much – with David, I’d be sorry).

Jack asked me Sunday who I’d like to direct the script if he could find financing (a known director would offer more security of course than Anatol could).  Yesterday, after some brief thought (more or less off the top of my head) I gave him two names: Franc Roddam and Bertrand Tavernier.  I can’t believe I’m considering things like this. 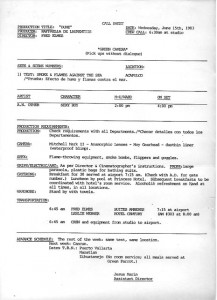 Yesterday, Pablo was sick and Anatol was drunk (he was up boozing until four in the morning).  We sent Pablo home, and Anatol slept in the office.  I spent the day waiting for Jurgen Prochnow to become available for an interview.  He was incredibly decent, doing it after seven in the evening – a good one too.  We had to get it because he was scheduled to have part of his beard shaved off this morning for his final shot (the Baron rips open the Duke’s cheek and poisonous smoke comes out from the tooth implanted by Dr. Yueh).

That shot was got to this evening.  All set up.  Jurgen on the table, a tube running into the prosthetic on his cheek.  Something went wrong on the take – too much smoke.  Even before Ken McMillan tore the cheek, the yellow smoke spewed out (a broken seal?) engulfing Jurgen.  He broke away from the table, tearing off the prosthetic – tearing the newly shaved cheek which was burned by the smoke.  A bad end to the day – a lousy way to finish his work on the film which he yesterday said was a great pleasure….

Not a good week at all.  For a while Anatol was absolutely impossible – Thursday he was like a raving lunatic, whatever I said to him he became furious, refusing to understand me … it got to the point where I just came out and said “I can’t work like this – we’d better call Gordon and tell him to find someone else to replace me” and Anatol angrily agreed.  By the end of the afternoon he was back to what for him is normal.  But by now, both Pablo and myself have no respect for him – he’s a self-made failure, obviously doesn’t know how to do this job and has no sense of responsibility.  Pablo and I have agreed to push him as much as possible to shoot what’s necessary – and if he gets awkward again to shoot it ourselves.

Meanwhile, the atmosphere on Dune has lost much of the friendly tone it once had.  Raffaella doesn’t know how to treat people decently.  Everyone feels used and abused on the production.  The hours have grown longer again.  And still no one seems to have signed a contract (even Dykstra).  The Apogee people are all gloomy because David doesn’t have a practical idea of what’s involved in the effects work and Raffaella doesn’t want to pay for what they’re asking Apogee to deliver.

Wednesday evening I had supper with Jack Nance at his hotel, after which we went to a sleazy little nightclub on Insurgentes.  An amazing place with a continuous show – a live band, strippers, singers, a comedy group whose skits included religious satire.  We stayed until the joint was closing up – around three-thirty.

It struck me there that it would be a good idea to make a film of Malcolm Lowry’s Under the Volcano with Jack as the minor diplomat who drinks himself to death … should check that out.

Helen Bickham, the artist, visited the studio yesterday – Oscar Rodriguez was supposed to come too, but he didn’t make it.

If we could find transport, she’d act as guide tomorrow on a trip to Tepoztlan (one of the towns studied in my Mexico course last fall).  Though Jack, who’d like to go, finds her chatter intolerable.

I took Maggie Anderson, the dialect coach, to supper yesterday (Bellinghausen) – she’s a marvelous character – I definitely want to keep in touch with her (she’s leaving early next month).

Only spent a couple of hours at the studio yesterday – to shoot one of the artisans in Giorgio’s shop. 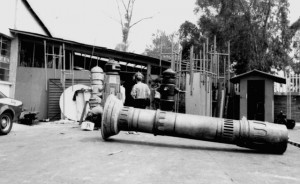 Went to supper with Maggie again – an odd thing.  I’d taken a nap in the afternoon.  Helen and her stepson dropped by.  After they’d gone, I took a walk around the area, came back here about eight.  I tried to call Fred to see if he’d like to go eat – and found myself talking to Maggie, who’d just called here to speak to Pier Luigi Basile – a crossed line.  She recognized my voice asking for room 21 and asked if I’d like a “return engagement”.  So we went to a Chinese restaurant on Niza – not too bad.

We talked about David – he is not, she insists, either a painter or a writer.  He expresses himself graphically through his fingers, carried by instinct, intuition.  As for writing, she says the script is dreadful (it does lack the central thread of character development necessary to carry the story – the weight of that has to fall on Kyle).

As she sees it, he’s typically American – he carries no past with him, no cultural baggage.  Her metaphor is that he was born in the caul and still hasn’t escaped it – he’s grown in the womb.  But his instinct is so powerful that it throws up a lot of things which do work – yet nothing so complete because nothing is thought (the problem with The Elephant Man).

We also talked about Anatol – she too sees him as someone not really going anywhere (though he’ll get jobs because he can charm people like Raffaella).  She rather surprised me, after asking about the genesis of the Paris script, by saying I should go on to something else because if I’ve decided not to do it with Anatol he’ll steal it from me….

After supper I introduced her to El Corral, which she loved.

It’s a pity she’s not thirty years younger – she’s the best date I’ve ever had.