Talk about strange coincidences – this time an unhappy one. 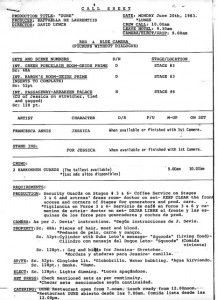 Last Wednesday, out of nowhere, I flashed on the idea of doing Lowry’s Under the Volcano with Jack in the lead.

Today at lunch, Cyril (one of the people in wardrobe) mentioned that he’d been asked to do a bit of work on a film starting in July in Cuernavaca – something about a volcano, from a book written in the thirties – all taking place in one day – a diplomat drinking himself to death….  It rather upset me.  John Huston is making it, with Albert Finney, Jacqueline Bissett, and Anthony Andrews.

I guess that’s the trouble with good ideas – they occur to other people as well….

After an incredible thunderstorm yesterday evening I went out wandering in search of Jack.  I found him in the restaurant of his hotel.  We had supper, then took off in pursuit of a bar.  We wound up at Lombard’s – which, from the decor, must once have been a bordello.  A friendly waitress who was just like a younger, Spanish-speaking Lila Kedrova.  When that place closed down, we made our way to another – the very noisy one across Amberes which often wakes me up at night.  From there, in search of coffee.  We had a three o’clock breakfast at Vips on Niza (where Anatol and I landed that first morning in the city).  And all the time, Jack was going back over the Herbert Noble story (the Texas gangster he told us about that Saturday at the Galeria Plaza).  He wants me to write it into a script.  Read the material he’s gathered, then go to Texas to do some research – archives, talking to people who were connected with it….  It really sounds like a viable story.

Anatol obviously realizes that things have gone wrong between us.  At the end of last week he said that despite our difficulties, we have to stick together on this project as protection against being screwed altogether (by the way, we discovered that the two of us together are being paid only a bit more than one stills photographer – George is getting about $300 a day).  And I don’t know how many times now he has said that once I’ve got my screenplay I’ll take off and make it myself, leaving him behind.  Yesterday morning he came out and asked how much I want to be paid for it – again saying I’ll probably go off and do it myself, not even giving him a “story by” credit.

The thing is, although he knows it’s gone sour, I really think he believes it’s all on my side – he’s constantly talking about my temper, saying I should start taking tranquilizers.  Yet I’ve never yet exploded the way he does, become absolutely impossible to talk to (I’m not saying I’m not moody and difficult).  The difference between us is, I think, that I realize when I’m being awkward, but he doesn’t.

On top of it all I’ve grown to hate so many of his mannerisms….

I think my little “joke” a while back stopped David short because the comment was actually true – and maybe he knows it.  His penchant for – unpleasant things has been completely cut loose because of the huge budget (yesterday he had Paul Smith tear the tongue out of a dead cow and eat it – I had to leave before they did the shot).  Without a strong producer to keep the lid on, all the bogies are coming out of David’s mind – and he doesn’t have a sense of proportion.

Between the ham-handed de Laurentiis production technique and David’s obsessions I’m beginning to lose faith in the viability of this project.  I think Dune may turn out to be an awful mess, much of it alienating the audience.  I really hope I’m wrong, that this feeling is just a projection of my current negative state of mind – but I’m not the only one who’s feeling this way; quite a few people around the set have become a bit disgusted with the proceedings.

The big news this week is, of course, that Apogee is off the picture.  Dykstra finally told them he can’t possibly work under these conditions – and since he still doesn’t have a contract … it’s in the hands of the lawyers, as Greg put it.

A practical move, of course.  Halfway through the shoot, with no other major effects house available, and what’s rumoured to be a very good worm test just delivered – if de Laurentiis doesn’t back down and act reasonable about the budget, the project is in serious trouble – it’ll be crippled by cut-rate effects.  The next couple of weeks will tell – they’ll have to get Dykstra back, and on his own terms.

I heard from Maggie something which goes further to confirm David’s lack of a sense of reality – I’m beginning to find him a little horrifying beneath that gee-whiz facade.  Before that business with the effect which burnt Jurgen, it was David’s plan to have a plastic surgeon (specifically the awful young woman doctor who’s on set during the day) actually cut a hole in Jurgen’s cheek for the smoke.  Maggie was present when Raffaella went to David and said “you’re not going to cut any of my actors” – and he was, Maggie said, furious about it.  He told Raffaella he’d do it himself.  She said he could cut himself up, but only after the film was done.

I got a letter from Fred Clarke.  The book rights are automatically mine – no problem.  He wonders why I haven’t been in touch about covering Dune.  Mike Kaplan, the managing editor is coming down this week, so I’ll have some direct contact. 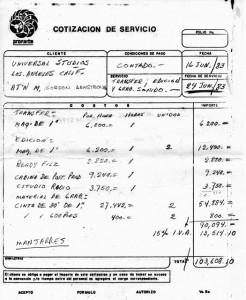 Paul Sammon arrived Wednesday evening.  Brought me down some stuff – the recorder next to useless, because it’s too big to carry around (the whole point in having it).

We spent Thursday pulling out the shots he wanted for his promo film – I set up all the cassettes so they were ready to go at the right spot.  Friday we took the player over to Pronarte and they plugged it into their system (it took a long time), transferred the material to one-inch.  By then it was lunch time – I left him, taking the cassettes.

In a way, we were far too generous.  Sammon took writer, producer and director credits, and we didn’t argue – but he neither produced nor directed, merely wrote, narrated, and edited.  Neither Anatol nor Pablo can stand him, and I have to admit he’s more than a nuisance, pushy.  And it was his outline that Armstrong sent down to us (Sammon was a bit nonplused that we’d seen it).

And speaking of Armstrong – he was down for the Universal “convention” (a visit of over a hundred exhibitors on Friday).  The same old thing: quick talk, little substance.  He took back the first thirty cassettes (illegal – the Mexican censor is supposed to see them first), told us that sure we’d be editing (though they haven’t decided on the actual form yet – got a dozen ideas including Sammon’s – but he hasn’t asked me, has he?).  And he’ll “take care” of us on the matter of the promo thing.

Jack’s in a bad way.  Pains in the gut.  On antibiotics, pain killers – but still drinking.

Thursday evening there was a thunderstorm.  We went up on top of the Royal to watch it.  Had some drinks, talked.  (We got into a rhapsody on the french fries there – very good.)  The bar closed around midnight.  We were up there alone.  He stood in the light rain by the lawn and declaimed a passage of Shakespeare – beautifully.  It was very moving.

We went on down to the basement bar, where we met John Stirber.  He’d had a lot to drink – talked about how this job is ruining his family but he can’t help it, it’s what he wants to do.  His plans for an invention he hasn’t been able to get off the ground.  A rather depressing encounter.

From there we went to the sleazy joint on Insurgentes, where Jack became obnoxious – a loud drunk.  The problem was that Maria, the woman we met there last time, didn’t want to strip in front of him, wanted him to leave – he ordered more and more drinks.  With her help, I finally managed to get him out.  We were going for a coffee when one of the many touts in the area handed him a card – a bar where there are girls, etc.  Jack went on to the place.  I came back to the hotel.

I wish there was something I could do for the guy, but what?  He’s become self-destructive (says he’s going to die in Mexico).  He seems to like me – wants me to work on that script for him, calls me up a lot.  That night he told me that I was the only one who had the guts to face the way he really is – no one else will stick with him on these night journeys.

He finally read the outline of Café Universal.  Nasty, vicious, sordid – but he likes it a lot. 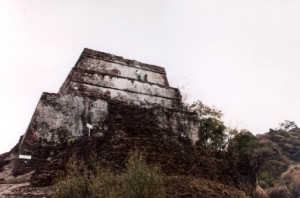 Pyramid on the mountain above Tepoztlan

Today, I went to Tepoztlan with Helen Bickham and her stepson Danny.  We climbed a mountain to a small pyramid, had lunch on the town square, looking out on the market.  Seems like a fairly nice place, nestled at the foot of steep mountains at the end of a huge valley.

A very positive response from her about my article.