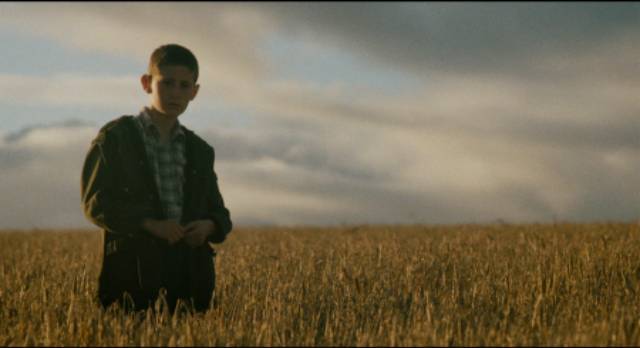 Memory is highly selective. Even when something makes a strong impression, we tend to remember fragments rather than wholes, sometimes retaining only a fragmentary trace of the original experience which may be accurate in some specific detail, but otherwise a distortion of the whole. Lynne Ramsay’s first feature, Ratcatcher (1999), had a powerful emotional effect on me when I saw it on its original release and again when I watched it on DVD almost twenty years ago, but seeing it again on Criterion’s new Blu-ray, I was constantly taken by surprise – individual images connected with my memory, but while I recalled it being both bleak and poetic, on this viewing it seemed far darker and more emotionally wrenching than my recollection. 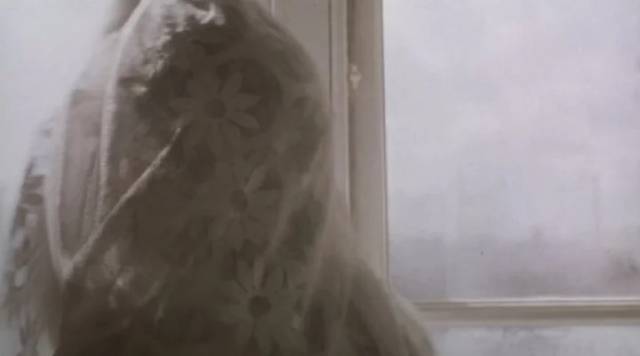 Speaking to a friend who also hadn’t seen it in years, it was interesting to note that his memory had clung to a number of brighter, more hopeful moments scattered through the film, having suppressed much of the more distressing material. Essentially both our memories had shied away from the darkest moments, clinging to the fragile instances of potential relief which Ramsay had woven through one of the bleakest depictions of childhood on film. In its poetic evocation of that unstable state between supposed innocence and adult awareness, Ratcatcher belongs with Bresson’s Mouchette (1967) and Bill Douglas’s autobiographical trilogy (1972-78). 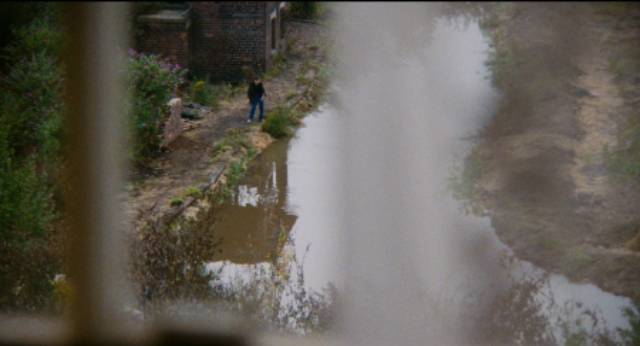 James plays at the edge of the filthy canal

From its very first image Ratcatcher is overshadowed by the possibility of death. A young boy spins inside a lace curtain, his face tightly wound in what looks like a shroud, a faint sound of children at play in the distance. Shortly afterwards, this boy, Ryan (Thomas McTaggart), lies dead at the edge of a filthy canal behind the building where another boy, James (William Eadie), lives with his parents and sisters. James is a silent, haunted figure, not least because he was responsible for Ryan’s death; their play beside the canal had turned to rough-housing and anger and he had pushed Ryan out into the water before running away, leaving him to drown. 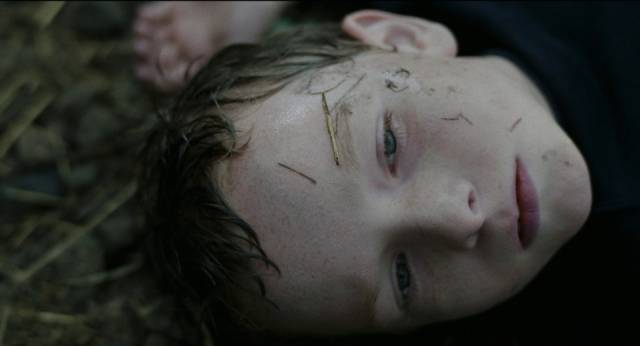 Ryan is pulled from the canal

Ramsay doesn’t narratize James’s confusion or guilt, but rather evokes it through often oblique, evocative imagery. She creates a space within which the audience experiences the world through the boy’s feelings. In some ways, Ratcatcher is reminiscent of the films of Ken Loach in its finely detailed depiction of poverty and working class life, but rather than the explicit social and political critique of Loach’s work, it draws the viewer into James’s existential state. The sense of despair, countered intermittently by brief glimpses of warmth and hope, is all-enveloping. 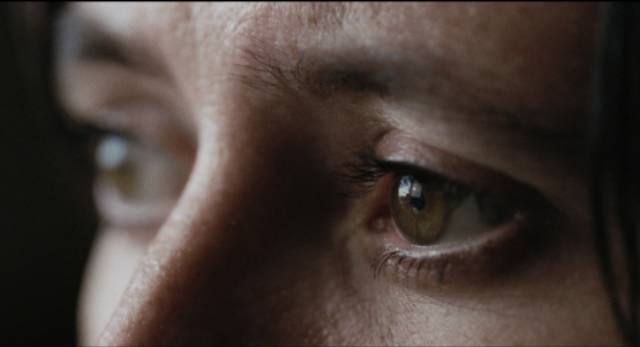 The family lives in a tenement destined for demolition and are waiting to be assigned a new home in a council development. Da (Tommy Flanagan) is an unemployed alcoholic; Ma (Mandy Matthews) struggles to hold the family together; older sister Ellen (Michelle Stewart) has a life of her own hidden from James, and younger sister Anne Marie (Lynne Ramsay Jr.) is still a child. James is in an unstable in-between state, no longer able to exist in the carefree space of a child, but not yet fully admitted into young adulthood. He watches everything from a slight distance, growing aware of the insecurity which surrounds the family and edging towards a sexual awakening. 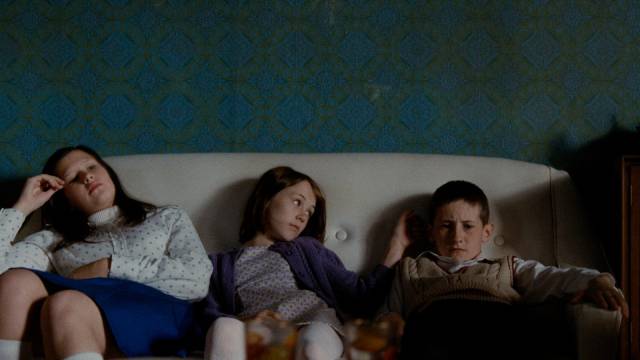 He watches a gang of older boys who use and abuse adolescent Margaret Anne (Leanne Mullen) and himself hovers between a childish friendship with her and erotic desire. She in turn is drawn to him because, unlike the boys she submits to with resignation, he is shy and undemanding. In a key scene which it would be hard to imagine a filmmaker risking today, James and Margaret Anne take a bath together as he helps her deal with the head lice which plague all the children; their mutual nakedness is shown as entirely non-sexual, an expression of prelapsarian innocence, a brief respite from the harsh reality of their lives beyond this safe space. 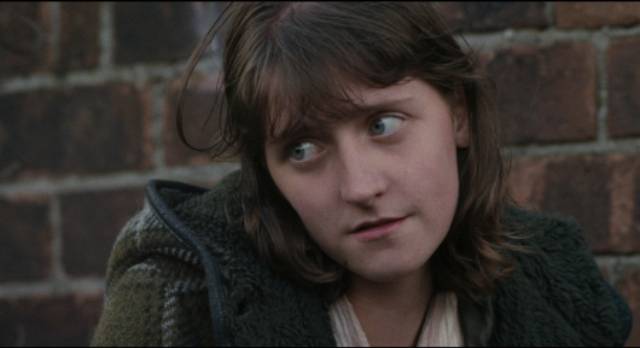 But escape may be nothing more than a fleeting dream. Twice, Ramsay creates a vision of escape, but in each instance there’s a touch of fantasy, a suggestion that this can’t be real. James flees the tenement flat and catches a bus which takes him out of the city and eventually leaves him on a country lane winding through open fields. Walking on, he comes to an empty suburb of partially completed houses – perhaps the place his family will eventually be moved to by the council. In one of these houses, a kitchen window which has not yet been closed in with glass looks out over a sunlit wheat field. James climbs through and runs through the waist-high crop, jumping and rolling in this place which is the antithesis of the filth and decay which surrounds him at home. 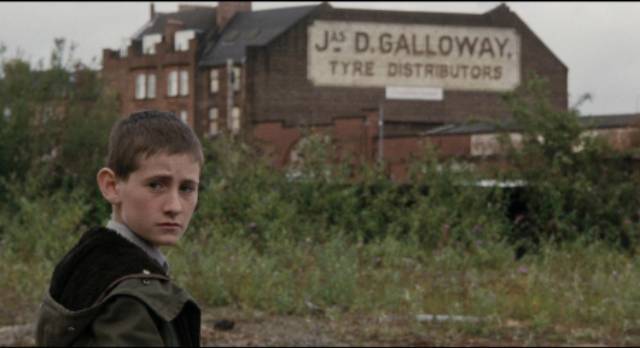 James watches the world with suspicion

In the second instance of seeming escape, a boy named Kenny (John Miller), who has more affinity for animals than other children, brings out his new pet mouse to show James. The gang of older boys appear and take the mouse from him, tossing it from one to another, and telling Kenny not to worry because it can fly. When he finally gets the little animal back, Kenny goes inside and moments later calls down to the boys from his window; he has tied a balloon to the mouse’s tail and releases it to fly away – to the moon, he says. And suddenly, we see exactly that, the mouse hanging from the balloon, drifting through space and finally landing on a lunar surface among many scurrying mice. Escape is both lyrical and a cruel illusion – later, when Kenny insists that his pet has gone to the moon, James bluntly tells him “no, you killed it”, and Kenny suddenly tells James that he saw him push Ryan into the canal. Death hangs over these children as a constant presence. 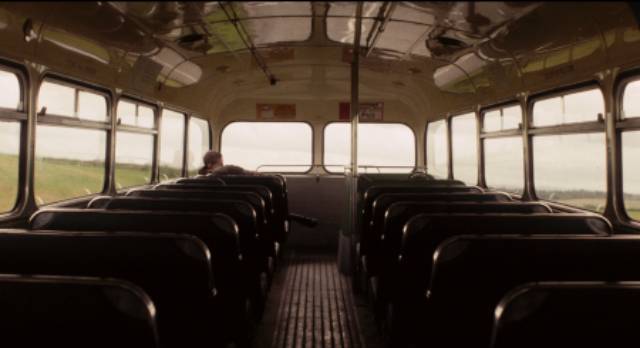 James takes a bus out of the city … 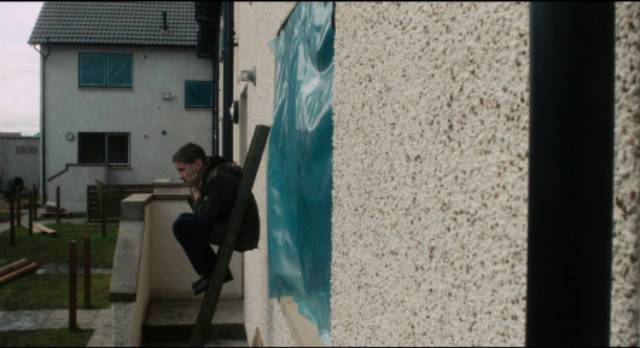 … and discovers a half-built housing development … 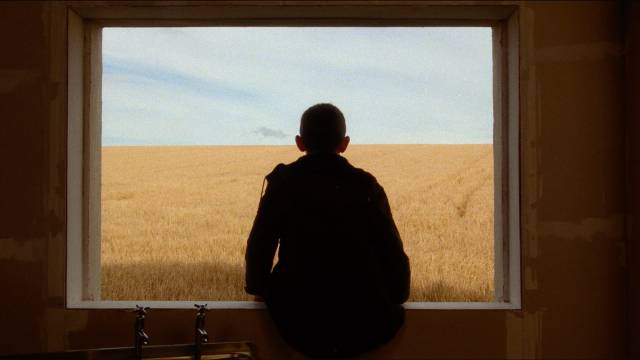 The tension between hope and hopelessness is embodied in the film’s dual ending. In a long shot, we see James jump into the canal and the camera follows as he slowly sinks into the murky water, a visual echo of that opening shot of Ryan turning in his lacy shroud. But then, after a moment of black, the image opens again on that sunlit wheat field with James and his family approaching, carrying various pieces of furniture – they have been liberated from the confines of the slum and are heading towards new possibilities offered by that suburban estate. James puts down the chairs he’s carrying and looks out towards us, his face suddenly losing all tension and suspicion, lighting up with a radiant smile … there is, perhaps, a real alternative to the grim constraints of poverty. But again the image goes black and the end credits roll over him continuing to sink into the murky water of the canal, so that moment of joy may have been nothing more than a dying flicker of fantasy. 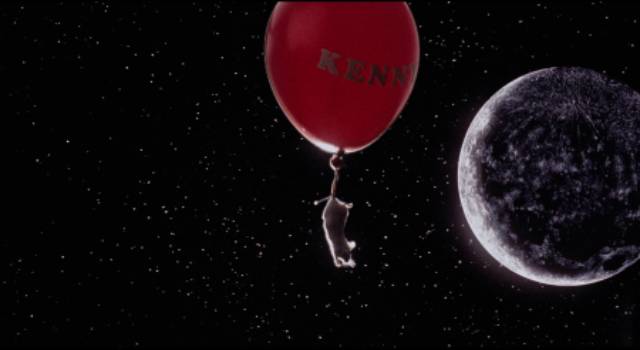 Although it can seem a bit disrespectful to say that an artist’s first work remains their best – after all, technical and expressive skills develop with further experience – this seems true of Lynne Ramsay’s Ratcatcher. Although her considerable artistry is apparent in her subsequent work, this first feature has the richness and intensity of something deeply personal. Her three later features are all adaptations from novels, but Ratcatcher was an original script rooted in her own experience growing up in Glasgow. The sense of period and the details of a particular social milieu are very strong in Ratcatcher, which is set during a garbage strike in 1973 – you can practically smell the filth and decay as the kids play in streets piled high with rat-infested trash bags. 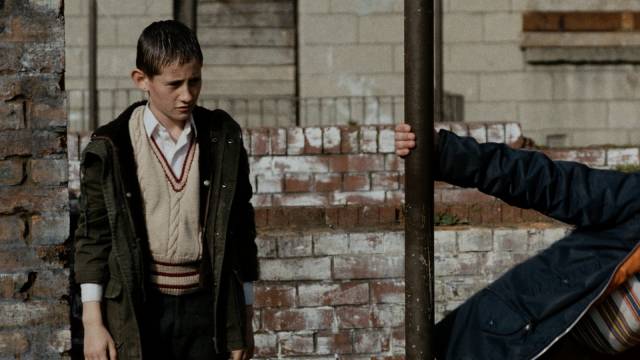 Kenny tells James he saw him push Ryan into the canal

Like Jane Campion, whose early work bears some similarity to Ramsay’s, she set out originally to be a visual artist – Campion was a painter, Ramsay a photographer – and visual expression often takes precedence over narrative. A focus on small, telling details gives her work a tactile quality out of which characters’ psychological and emotional states emerge without the need for much, if any, dialogue. We learn everything we need to know from their actions within their acutely observed surroundings. James seems passive and almost inexpressive much of the time, but at several key moments we become aware of the intense longing for some tangible connection with someone outside himself – on the edge of the canal when he tentatively rests his hand on Margaret Anne’s grazed knee; at night when he sees his sleeping mother’s toe sticking out through a hole in her stocking and gently tries to pull the nylon back over it (a moment which reminded me of Jamie in Bill Douglas’s My Childhood [1972] warming a teacup with hot water and placing it gently in his grandmother’s cold hands); and finally combing the lice out of Margaret Anne’s hair and joining her in the bath, splashing playfully like two young children… 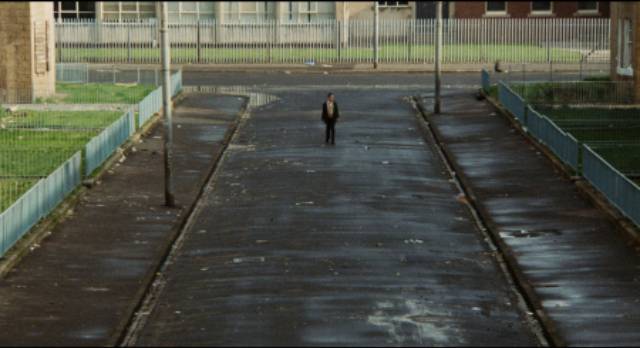 James seems all alone in the world

Ramsay fills the film with images which are often achingly beautiful even as the world they depict is harsh and ugly. And yet there’s no sense that she’s aestheticizing poverty; rather she’s honouring the humanity of the people who live in a place there’s so little chance they’ll ever be able to escape. Much of this rests on her sensitivity to the cast, most of whom were non-professionals. Tommy Flanagan and Mandy Matthews are excellent as James’s parents, but the heart of the film lies in the remarkable performances of William Eadie and Leanne Mullen, with strong support from Michelle Stewart, John Miller and the other children. 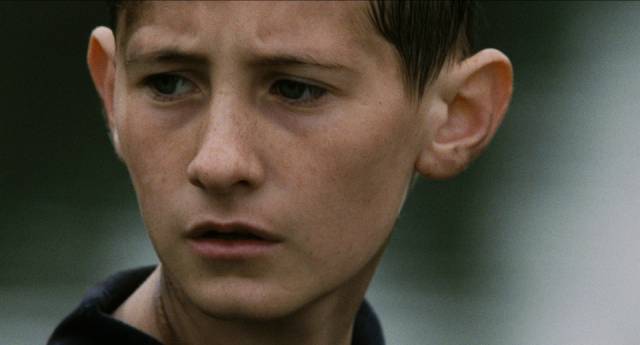 Ramsay’s often striking compositions, skillfully photographed by Alwin Küchler, look vibrant and alive in Criterion’s new 4K transfer (though Gary Tooze at DVD Beaver has some comments about the inaccuracy of the new colour timing). The soundtrack is often subtle, with Ramsay eschewing naturalism for a poetic expressionism which complements the imagery. Thankfully there are subtitles to help decipher the thick Glaswegian accents.

New features include another interview with Ramsay (20:15) recorded this year, which is an interesting complement to the earlier one – her thoughts about the film and the personal experiences from which it grew have remained consistent, but she seems a bit more relaxed now given the distance of two decades and three more features. There is also a lengthy audio piece in which cinematographer Küchler discusses his work with Ramsay (which includes all her films up through Morvern Callar).

There’s a trailer (1:20) and a booklet with an essay by critic Girish Shambu and a piece by filmmaker Barry Jenkins in which he recounts his own influential encounter with Ramsay and her work when he was a film student.