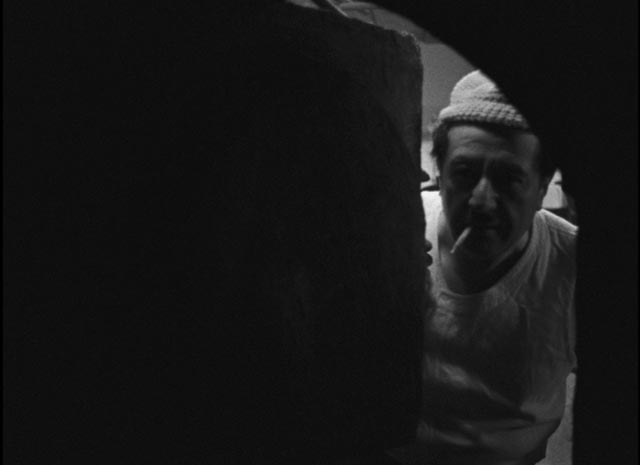 Marcel Pagnol is an interesting figure in the history of French cinema. As a playwright in the 1920s, he had little interest in movies, but when sound came in at the turn of the decade he embraced the new medium and soon gave up the theatre. Perhaps unsurprisingly, given his emphasis on dialogue – and facility with verbal wit – his work was often greeted with a mixture of admiration for rich characterizations and criticism that he merely made filmed theatre, not real movies. A tendency to use a fairly static camera and sometimes awkward editing – particularly cutting into scenes with closeups which are jarring because of a seeming carelessness about matching angles – could make his work seem stylistically perfunctory.

But closer attention complicates this impression. His blocking of actors in a fixed frame emphasizes social and psychological connections which seem organic rather than imposed by the filmmaker, giving his work some similarity to Jean Renoir’s rich mix of detached observation and empathy for humanly flawed characters. Pagnol’s attention to the physical space within which his stories play out also belies the accusation of filmed theatre … although he built his own studio in Marseilles, he liked to shoot on location, placing his characters in a visual space which suggests a larger world beyond their often petty conflicts. Adding a preference for regional vernacular speech to this sense of place, Pagnol’s work is something like a precursor to neorealism blended with the poetic realism characteristic of much of French cinema of the ’30s. 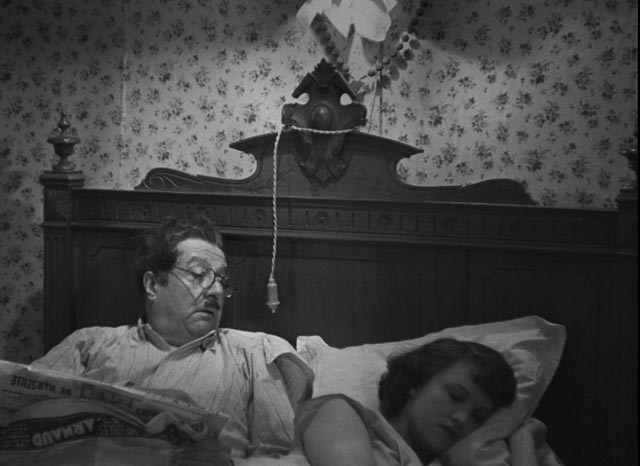 With all his attention on work, Aimable (Raimu) is unaware of Aurélie (Ginette Leclerc)’s dissatisfaction

La femme du boulanger (The Baker’s Wife, 1938) is as rich a film as Pagnol ever made, yet it came about purely by chance. When another filmmaker who was scheduled to shoot at the Marseilles studio pulled out at the last minute, probably due to his funding falling through, Pagnol was faced with overheads and immediate cash flow problems, so he quickly contacted writer Jean Giono, got permission to adapt a story, wrote a script in ten days, and planned to quickly make a 50-minute short. His first choice to play the lead turned him down and urged him to give the role to Raimu, who had been so crucial to the earlier Marseilles Trilogy based on Pagnol’s plays. Raimu accepted, and it became apparent that this would be a full-length feature.

Filmed in the Provençal village of Le Castellet and on stages at Pagnol’s studio, The Baker’s Wife is an entertaining combination of broad farce and finely observed social comedy. From a modern perspective, it is also problematic in its treatment of gender relations. Raimu plays Aimable Castanier, a jovial baker who has just moved to the village with his much younger wife Aurélie (Ginette Leclerc). The previous baker hanged himself and the villagers eagerly await the first batch of bread, having previously been dissatisfied and now unhappily having to travel to neighbouring villages to buy the staple. 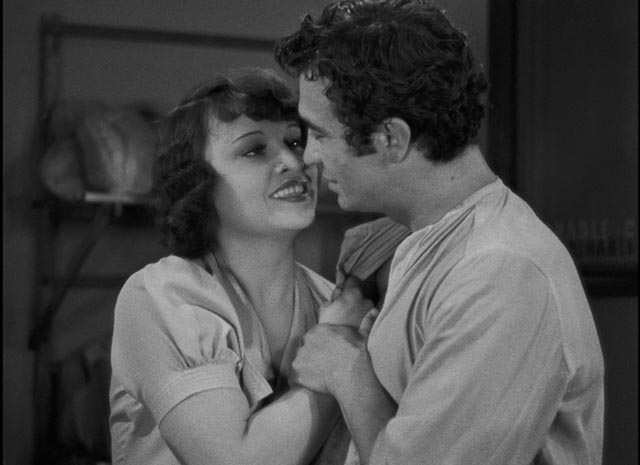 As the crowd waits for the batch to come out of the oven, they banter with Aimable in front of the shop, tossing around double entendres about his attractive young wife and the loaves. It’s clear that Aimable views Aurélie as a kind of business asset, her physical appeal something to draw customers to the store. Later, as they turn in for the night, it’s also clear that she’s sexually frustrated and that his only concern is making bread. So it’s not surprising that she runs off with a handsome shepherd (Charles Moulin) who works for the dissolute local Marquis (Charpin).

Despite his neglect, Aimable is distraught when it becomes clear that she’s left him. As a cuckold, he becomes the butt of jokes among the villagers. But they quickly become distressed because he has lost all interest in baking. There’s no bread and something must be done. In the early stages of the film, Pagnol has sketched in numerous disputes and conflicts among the villagers, some going back generations with original causes long forgotten. One farmer’s trees cast shade on another’s field, withering his crop of spinach; the priest and the teacher argue over faith and reason. If there is to be bread, these differences must be set aside and everyone must help to find Aurélie and bring her back. 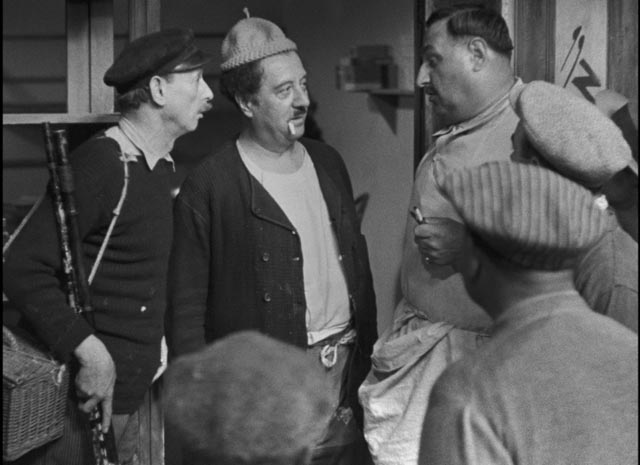 Aimable becomes the butt of ribald jokes after Aurélie runs away

In becoming a figure of ridicule and the butt of sexually humiliating jokes, Aimable takes on a ritual role going back centuries; he’s the clown, the fool, the one who takes on his own shoulders the weight of social stresses which can’t normally be openly expressed without risking the disintegration of the community. Because of his embarrassing plight, the feuding farmers rediscover a friendship which renders their differences pointless; even the priest and teacher set aside their political and philosophical differences for the sake of the community … in the process providing the film with its best visual gag when the teacher has to carry the priest on his back across the marsh to an island where Aurélie has been seen (naked!) with the shepherd.

Realizing that their tryst has no future, the shepherd abandons her and the priest and teacher take her back to the village, waiting until night when the streets are empty to spare her the humiliation suffered by her husband. Her return represents the healing of the community and a restoration of order … but from our vantage, it also represents something more problematic. 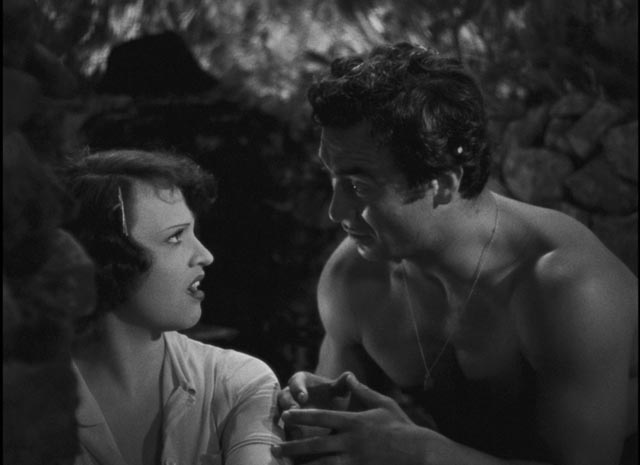 Aurélie’s escape proves to be a mere romantic illusion

Aurélie is allowed little autonomy or agency by the story’s structure. While the film acknowledges her dissatisfaction and her sexual desire, it cannot allow them the room necessary for her to exist as an equal individual. Her contrition and acceptance back into the marriage keep her subservient to Aimable, who no doubt loves her but nonetheless continues to see her as a component of his role as baker.

However, Pagnol doesn’t shy away from these issues and the film becomes surprisingly dark at the point of their reconciliation. The reunion is initially warm and Aimable makes an effort to minimize the pain he feels at her betrayal, providing a flimsy cover by pretending that he believes she had merely gone to visit her mother without telling him. This generous gesture touches Aurélie and reinspires an affection for him. But just then Aimable notices the return of a female cat which had recently run off in heat and all his bitterness pours out in a vitriolic and abusive diatribe which obviously expresses everything he feels about Aurélie and what she did … the tender moment turns disturbingly nasty. Before she can be fully brought back into the marriage, she has to be put forcefully in her place, shown that her autonomy and desire must be absolutely suppressed if a “harmonious” order is to be maintained. Her submission to these terms makes the seemingly happy ending ambiguous. 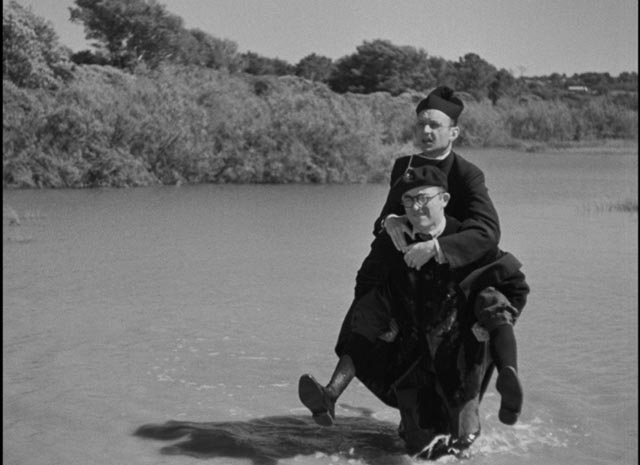 The Baker’s Wife is a witty comedy of manners, populated by vivid characters embodied by Pagnol’s stock company of actors – Raimu gives a performance of remarkable range, while Leclerc manages to express a great deal with very little dialogue, and the rest are given free reign to flesh out types with illuminating individual eccentricities – but there’s darkness beneath the breezy surface. While the film concerns itself with healing a divided community, its deeper theme is the threat posed to a comfortable patriarchal order by female desire and the necessity of suppressing that desire in order to maintain social stability.

Criterion’s Blu-ray has been mastered from a 4K restoration taken from the original nitrate negative and it looks beautiful. There are very few flaws despite the film’s age, and the audio is quite clear.

There are several informative supplements, beginning with an introduction by Pagnol from a 1967 TV broadcast (5:31) in which he sketches the story of the film’s rushed conception, something he expands on at greater length in a 1966 episode of Cineastes de notre temps (26:09), in which he also elaborates on his theory about the importance of the spoken word in cinema. There’s a brief featurette from 1976 about a screening of the film in the village of La Castellet, at which some people who had been extras during the shoot see it for the first time.

Finally there’s what’s called a selected-scene commentary by Pagnol expert Brett Bowles, which is actually four visual essays on various themes (totalling 38:58). Bowles delves into the folkloric aspect of the baker’s role in French country life, the issue of social divisions which posed a risk to France on the eve of the Second World War, and the film’s treatment of sexuality and marriage – in the latter case arguing against the conservative interpretation I’ve given above.

The booklet essay is by Ginette Vincendeau, who does grapple with the implicit struggle in the film between a nascent feminism and an entrenched patriarchy.

Criterion’s Blu-ray of The Baker’s Wife is an excellent companion to their box set of the Marseilles Trilogy, released two years ago.