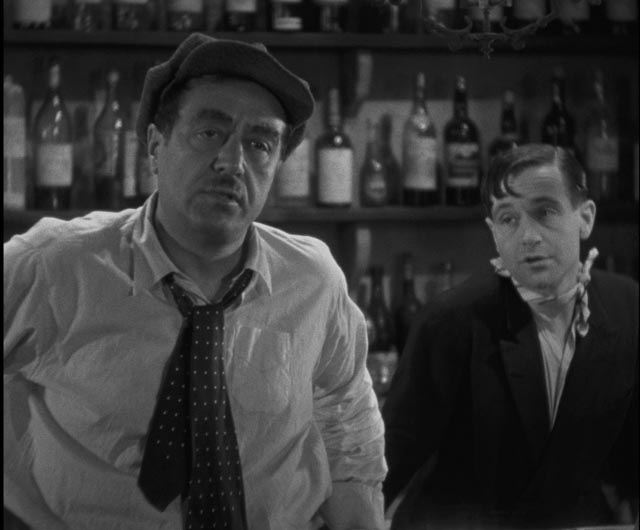 The much-disputed auteur theory, originated by French critics in the late ’40s and ’50s and adopted by Andrew Sarris in the U.S. in the early ’60s, is a useful if imprecise tool for discerning patterns and influences in cinema. It was initially a way to prise the work of individual film artists from the commercial imperatives of the studio system. It quickly became a way of asserting the primacy of the director as the creative force in cinema, a simplification and distortion of the enormously complex and collaborative nature of the art.

As evidenced by Criterion’s release of Marcel Pagnol’s Marseilles Trilogy, the figure of the auteur may be quite real and yet not necessarily, or simply, the director. Pagnol was, by the end of the ’20s, a successful playwright, who only became interested in film with the advent of sound. In 1931, he adapted his stage play Marius for the screen; it was produced by Paramount and directed by Alexander Korda. At least, that’s what the credits indicate, but apparently Pagnol was on set the whole time and directed the actors while Korda took care of the camera and other technical issues. 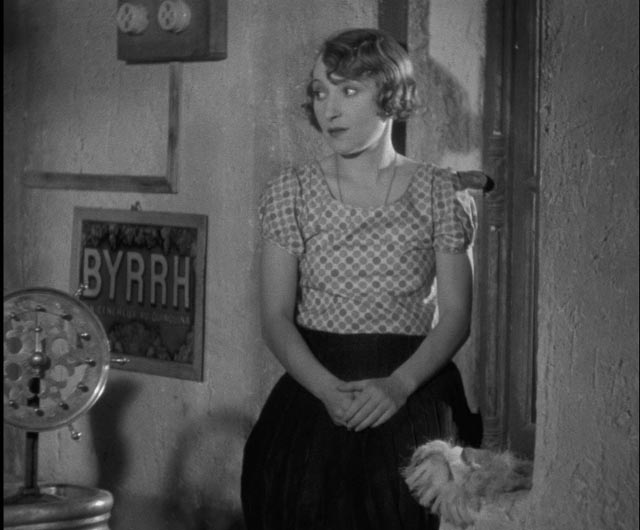 With that film’s success, Pagnol proposed adapting the play’s sequel, Fanny, but Paramount wasn’t interested because “sequels always fail.” Undeterred, Pagnol set up his own company and Fanny went into production with Marc Allégret as director. This was a less harmonious experience as Allégret assumed he would have full authority and didn’t appreciate Pagnol’s involvement on set. By the time Pagnol wrote the third part of his trilogy several years later (as an original film script, not adapted from a play), he had directed four features himself and chose not to share the work on César with another director. In short, he was deeply involved in all three films as writer, as producer, but not completely as director. Yet the trilogy has a conceptual coherence which indicates a strong primary creative intelligence, which seems clearly to be rooted in Pagnol’s work as the author of the scripts.

These three films, made over a period of five years, exhibit stylistic variations which reflect the evolution of film technique in the early sound period, and also the different approaches of their three directors, which display a gradual opening out from the confines of a studio soundstage to the purely cinematic potential of real world locations. But even as they evolve visually, what remains consistent is the conception of the characters (with one exception, all the roles are indelibly performed by the same cast in all three films[1]), a deepening richness which is as much a reflection of the actors’ investment as it is of Pagnol’s wonderful dialogue. Here again, the question of the auteur is complicated by the process of creation itself. As originally written (as a play), the character of César was considered peripheral by Pagnol, yet when he offered the play to Raimu, the actor declared that he wanted to play César and not Panisse, considered more central by Pagnol. When Pagnol pointed out the difference in scale of the two roles, Raimu told him to expand that of the bar owner César and Pagnol did, transforming his original work into something richer and more complex. 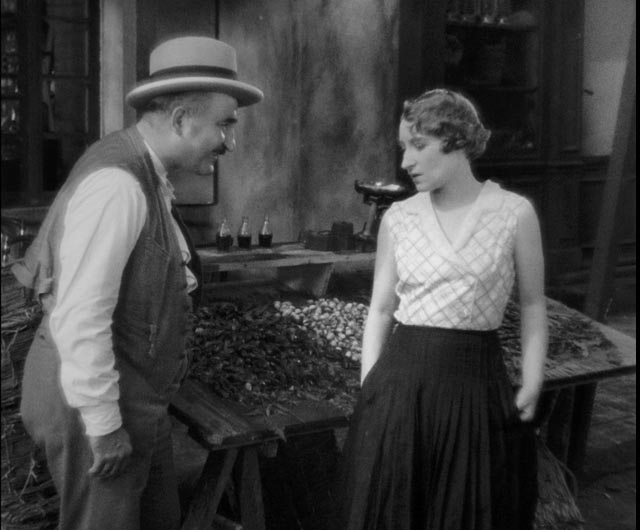 Panisse (Fernand Charpin) offers to save Fanny from social shame

The first film of the trilogy, Marius (1931), is largely stage-bound, shot on carefully lit sets with a polished camera style thanks to Korda. This does not mean, however, that it has the static quality often attributed to early sound films. Korda’s staging is dynamic, with the characters occupying the full visual space of César’s dockside bar and the street just outside. Here César and his son Marius (Pierre Fresnay) have a warm if occasionally prickly relationship. Just outside the door, Fanny (Orane Demazis) tends a seafood stall. She and Marius have known each other since childhood and in the course of the film they discover that they have, almost unknowingly, fallen in love.

But their relationship is complicated by two things: first, the ship’s merchant Panisse (Fernand Charpin), despite being thirty years older, has asked Fanny to marry him, something which would give her social and economic security. But second, Marius, having grown up dockside, watching ships and sailors come and go, hearing endless stories of far-off places, is desperate to escape the confines of the Marseilles neighbourhood which has defined his entire life. As indicated by the film’s title, the focus here is on the inner struggle Marius has between his growing attachment to Fanny and his desire for adventure. Realizing that clinging to him would only make him unhappy, Fanny precipitates a break, in effect making the decision for him, and the film ends with Marius setting sail from the harbour.

Marius – and the two films which followed – displays an unselfconscious frankness about sex and sexuality which gives the entire trilogy a sense of maturity of a kind which would become largely suppressed in Hollywood by the mid-’30s with the Production Code. The trilogy’s non-judgmental attitude towards Fanny in particular is an implicit criticism of the restrictive power that the Church wields over basic human nature, a power which shapes the attitudes and actions of the older people who surround Fanny. 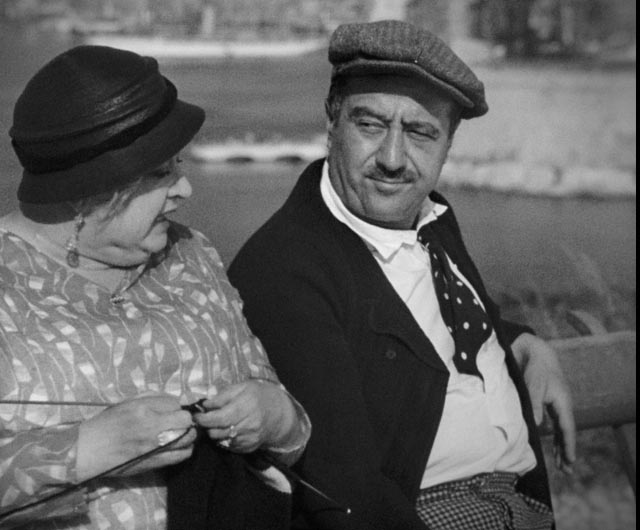 The second film, Fanny (1932), shifts its focus to her own moral dilemma. Faced with a pregnancy as a result of the last night the couple spent together, she wants to wait for Marius’ return, propriety be damned. But she is surrounded by adults who are deeply concerned with appearances – her mother Honorine (Alida Rouffe) with the blow to family honour, César and Panisse with Fanny’s own reputation – and she is eventually convinced to marry Panisse, who fervently commits himself to raising her child as his own, while César obliquely maintains his role as grandfather by becoming the boy’s godfather.

Where the first film restricts itself largely to César’s bar, Fanny takes in the home she shares with her mother and the home she will come to share with Panisse, and perhaps more importantly, the streets which run between these places, opening the story up within an attentively observed real world. The sequence which follows Fanny’s discovery of her pregnancy, in which she moves like a sleepwalker through those streets, climbing a high hill to a church where she seeks some kind of divine guidance, is shot from a moving vehicle with a concealed camera; the bustling streets are populated by the real people of Marseilles, unaware that the desperate woman passing among them is a character in a movie. It was scenes like this which lead to Pagnol being held up as one of the prime progenitors of Neorealism, blending the elements of drama with the raw reality of existing social and physical spaces. 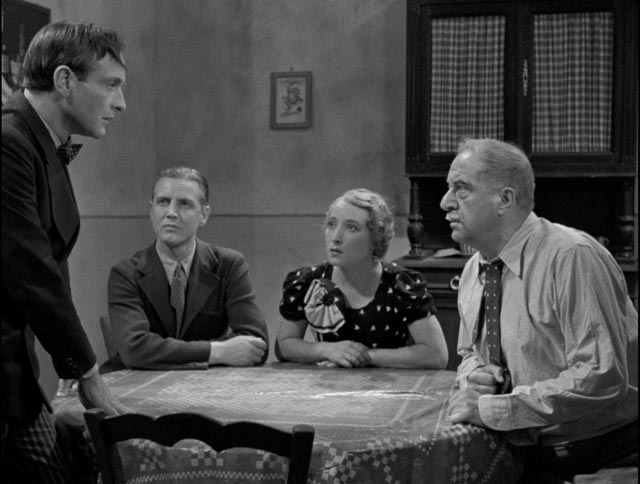 After twenty years away, Marius returns to confront the lies surrounding his son

There were four years between Fanny and the final film of the trilogy, César (1936), by which time Pagnol realized that cinema offered him a more viable canvas than the stage, in terms of both creative possibilities and commercial return, and he wrote the script directly for the screen. Set twenty years after the events of Fanny, it deals with the consequences of the earlier events for the lives of all the characters, including the now-grown son of Fanny and Marius, Césariot (André Fouchét). With the death of Panisse, Césariot is finally told of his true parentage, a devastating blow which casts his entire life as a lie. He sets off to find his actual father, long since returned from sea and now a mechanic in a garage in another town. Césariot conceals his own identity and various misunderstandings result in him believing that Marius is a petty crook, a bitter “discovery” adding to the blow of learning that his mother was not a “respectable” woman when he was conceived.

Unveiling a series of revelations which gradually peel away decades of lies and misunderstandings, César gradually reconciles the characters to one another and finally resolves the issues which had arisen from all the various conflicts, internal and social, which had damaged their lives. The trilogy ends on a deeply humanistic note, optimistic that even after decades it’s still possible to heal deep emotional and psychological scars.

The Marseilles Trilogy has a narrative fluidity marked by constantly shifting moods and tones, with comedy blending into tragedy and back again. The three films weave a complex pattern of interconnected lives disrupted initially by the impetuous decision of Marius which leaves Fanny in a precarious social position, with those around her constructing an elaborate lie to conceal an unacceptable fact, which leads to them all eventually living inauthentic lives for twenty years until the contradictions are finally resolved. Despite having three different directors and their evolution from stage plays to original work for the screen, the three films form a single coherent story in which we see these people growing and evolving in an organic, rather than literary or theatrical, way. In this, it seems clear that the actors are as crucial to the work as Pagnol himself; while he wrote the scripts, Raimu, Charpin, Demazis, Rouffe and Fresnay inhabit their roles completely, almost exploding with an earthy energy which draws the viewer into their lives with a visceral sense of engagement. Here in the early days of sound, it’s clear that Pagnol had a powerful instinctual understanding of the unique power of cinema to create a world in which realism can be heightened and focused by the imagination of artists working in close collaboration. These three films, more than eighty years old, provide the most satisfying viewing experience I’ve had in quite some time.

Criterion’s Blu-ray edition has been mastered from 4K transfers drawn from several sources, including the original nitrate negatives, and the results are impressive. While there are slight variations is quality (not surprising considering the age of the films), all have a richly textured film look, with strong contrast and a pleasing sense of grain. Audio is clear throughout.

Once again Criterion have stacked an already impressive release with substantial supplements, beginning with an admiring introduction by Bertrand Tavernier (19:38), the humanism of whose work obviously owes a debt to Pagnol.

Pagnol’s grandson, Nicolas Pagnol, who was instrumental is the films’ restoration, offers an account of the trilogy’s production and influence (29:54).

Marcel Pagnol: Morceaux choisis was a six-part television series about the writer-director’s work made for French television in 1973. Criterion includes one-and-a-half episodes devoted to the making of the trilogy (57:44, 27:17) which include extensive clips from the movies alongside various interviews with Pagnol himself discussing his work.

Marseilles (1935, 12:28) is a short impressionistic portrait of the port city produced by Pagnol.

In a brief featurette on the films’ restoration (2:24), Nicolas Pagnol describes the crowd-funding process which made the work possible.

Finally, there is a re-release trailer (1:38) and a booklet which includes an essay by critic Michael Atkinson and a lengthy account of the trilogy’s origins written by Pagnol as an introduction to accompany the publication of the scripts in 1964.

(1.) The comic role of ferry captain Félix Escartefigue was played by Paul Dullac in Marius and César, but he wasn’t available for Fanny, so in that film the character was played Auguste Mouriés. Whatever Mouriés’ qualities as an actor, he can’t help but be overshadowed by Dullac’s huge comic presence. (return)