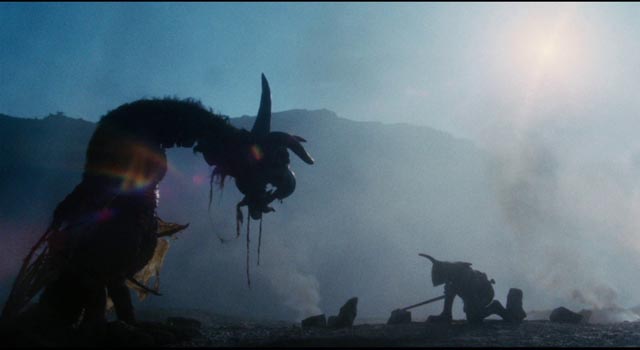 Animators tend to be an odd breed. Their chosen art requires extensive periods of solitude obsessing over minute details. Although he appeared as a performer in Monty Python’s Flying Circus – the original television series (1969-74) as well as the subsequent features – Terry Gilliam’s signature contribution to the troupe were the absurd, surreal animations which held the wildly inventive chaos together. That is, while the rest of the group possessed a typically British verbal approach to comedy, Gilliam – the lone American – was primarily a visual artist.

When the Pythons moved to the big screen – after an initial outing which merely transposed the TV show’s format to a feature-length theatrical experience – Gilliam served as co-director with Terry Jones. Jones, a Medieval scholar, perhaps instigated the retelling of the legend of King Arthur and his knights, but in light of the group’s subsequent varied individual careers, it seems likely that Gilliam was crucial to the look of Monty Python and the Holy Grail (1975). For all its anachronistic comic absurdities, Holy Grail was grounded in a detailed and coherent visual world, an evocation of filth, madness and violence which heightened every comic effect. 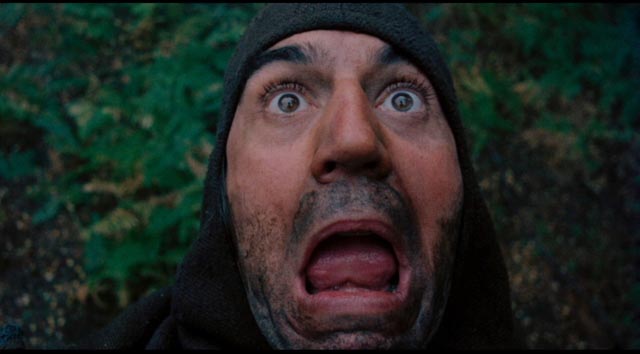 A poacher (Terry Jones) is surprised by the beast … 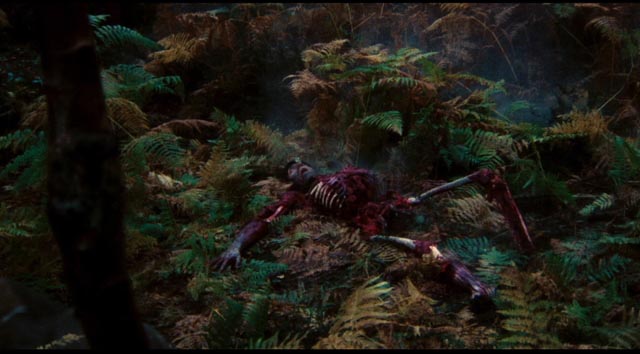 … and what’s left falls to the forest floor

While Holy Grail had moved further towards long-form narrative, it nonetheless remained episodic, a series of skits, more fully developed and better integrated than the TV show’s patchwork, but still reflecting its origins as a collaborative group effort. When Gilliam embarked on his solo directing career two years later, there were perhaps inevitable traces of Python in the resulting film (including appearances by all members except John Cleese and Graham Chapman), but it was a definite leap forward in terms of storytelling.

In Jabberwocky (1977), co-written by Gilliam with Charles Alverson, the Medieval world is richer and more coherent – filthier and more dense in its visual details, and even more pointed in its satirical jabs at social stratification. Taking Lewis Carroll’s poem from Alice Through the Looking Glass as a starting point, the film gives us a world full of piss and shit and blood, of death and decay, and most pervasively of human venality and stupidity. 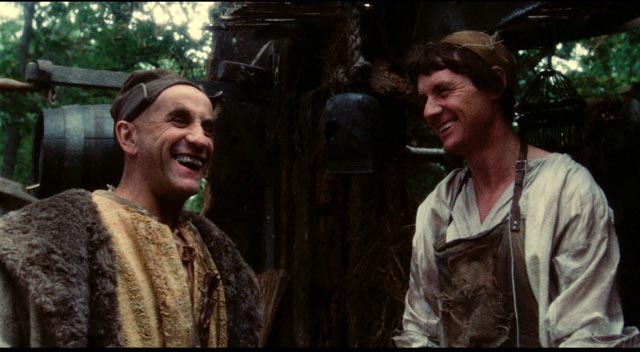 After a prologue in which a cheerful poacher (Terry Jones) goes through the woods emptying his traps, only to find himself stalked and killed by an unseen monster, we meet Dennis Cooper (Michael Palin), the cheerfully vacuous son of a village craftsman. Dennis has no interest in the craft of barrel-making; he wants to make money by doing things as cheaply as possible, an attitude which enrages his father, who on his deathbed disowns his son. Forced out into the world, Dennis bids farewell to his beloved Griselda (Annette Badland), the monstrous daughter of a tradesman who cares nothing for him, and heads to the city to seek a trade and a fortune.

But the monster rampaging through the countryside has created a crisis; the city is overflowing with refugees and no one is allowed in unless they have money, or at least some possessions of value. Dennis is turned away and like many others camps out below the city walls while inside the ruling class schemes to exploit the situation. The senile King Bruno the Questionable (Max Wall) is manipulated by his Chamberlain (John Le Mesurier) and the kingdom’s leading citizens – businessmen and the clergy – who see the existence of the monster as a great opportunity to make money and fill church pews (which in itself is a moneymaking boon). 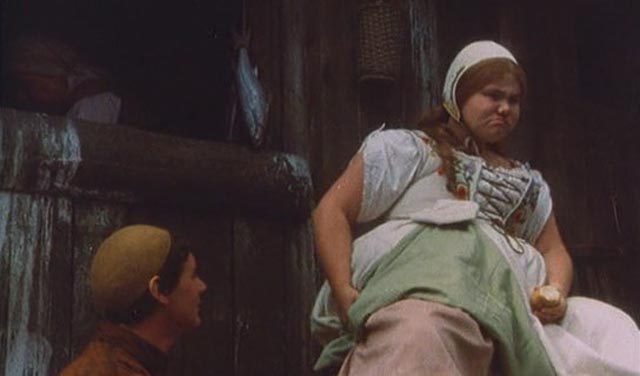 When the king is petitioned by commoners whose lives are in chaos – no food, no security – he decides to hold a tournament to find a champion, promising half the kingdom and his daughter in marriage to the knight who can slay the beast. The Chamberlain pushes for a more practical way to find this champion as the tournament merely kills all the potential heroes; and the leading citizens scheme to prevent the slaying of the monster by recruiting their own knight to get rid of the eventual champion.

Through a series of complications rooted in his own naivete, Dennis eventually finds himself serving as the champion’s squire and riding off to confront the Jabberwock – which, by the way, is a visual wonder when it finally arrives. 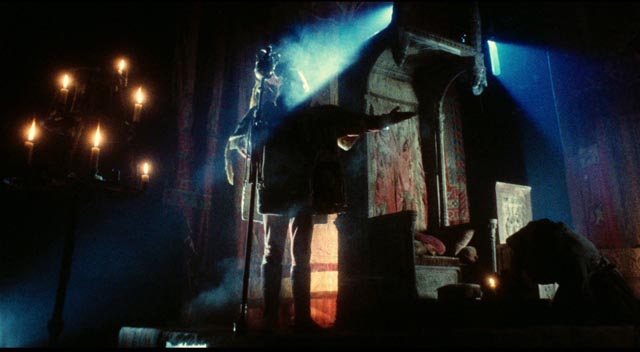 This is the classic hero’s journey and Dennis eventually achieves the classic fairytale “happy ending” – but it’s not at all what he wants. At every stage of the story, Gilliam undercuts the traditional narrative, finding that this world’s inhabitants fall far short of romantic ideals. The king and his castle are in terminal decay; the aristocracy are determined to enrich themselves by furthering the oppression and destruction of the peasants; the princess is as naive as Dennis, living in delusions derived from the very romances which the film refutes.

Made on a ridiculously low budget, Jabberwocky creates a fully realized world, all that filth and decay paradoxically rendered through images of often great beauty (photographed by Terry Bedford); every scene is packed with detail and layers of texture, giving it a greater sense of realism than many more expensive historical epics. These details reflect the depth of Gilliam’s imagination – the half-eaten potato, tossed away by Griselda and seen by Dennis as a token of her love, which gradually rots and sprouts unwholesome tendrils as the story progresses, a visual analogue for the true nature of his romantic illusion; the poacher’s sack, into which he stuffs each trapped animal, seemingly unaware that they are fighting and tearing each other apart as they hang from his shoulder before he himself is gutted by the monster; the endlessly falling dust and debris inside the castle, an expression of the clouded and chaotic mind of the king … every detail is a considered expression of this world in which human actions are futile gestures against a relentless entropy. 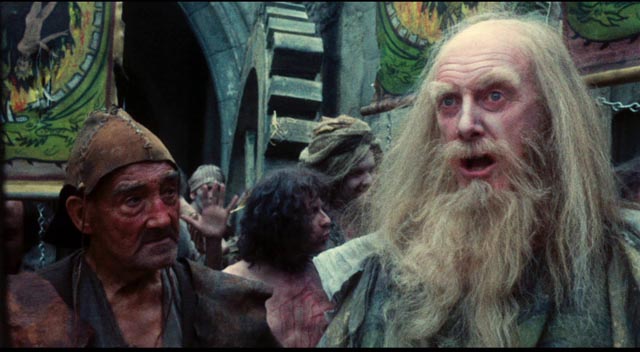 Graham Crowden as the leader of a sect of religious fanatics

While Holy Grail derived a great deal of its humour from anachronisms, raising laughs from a tension between the physical world depicted and self-referential details (the use of coconut-shells to make the sound of horses’ hooves; the sudden eruption of an absurd musical number …), Jabberwocky immerses us in its Medieval world, its humour largely residing in its treatment of character as caricature in the manner of Carroll’s Alice books. (The cast is a who’s who of British character actors: Harry H. Corbett, Warren Mitchell, John Bird, Bernard Bresslaw, Peter Cellier, Derek Francis, Bryan Pringle, Kenneth Colley, Graham Crowden, Brian Glover …) As a result, it’s not laugh-out-loud funny like Python, but it’s a richer and deeper work, and darker in its vision of human failings, the ways in which dreams and desires go askew and take us in unwanted directions. The verbal humour and physical slapstick seem poised above an abyss which threatens to swallow the world.

Gilliam’s dark worldview, perfectly rendered eight years later in Brazil (1985), is here already almost fully formed. It was this blend of absurd humour and darkness bordering on despair which earned both films a mixed critical response. Like the works of David Lynch, Gilliam’s films seem to emerge from some deep personal place not always fully accessible to the viewer; they come from that strangely isolated creative space occupied by the animator, building worlds from almost solipsistic impulses. Such films do not merely aim to please – in fact, they often give the impression that they don’t care whether we like them, or understand them – they exist for themselves and it’s up to us to enter them and take away whatever we can. 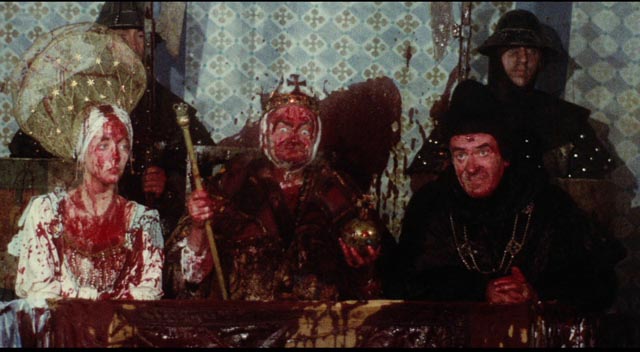 If I want to be amused, I’ll revisit Monty Python and the Holy Grail; if I want to be fully immersed in an imaginative world, I’ll turn to Jabberwocky’s Medieval dream.

Criterion’s Blu-ray derives from a 4K restoration undertaken by the BFI and the Film Foundation. Colours are dense, contrast rich, with pronounced grain in some lower-light scenes. The detailed production design looks excellent, belying the low budget. The soundtrack is clear and strong, adding depth to the film’s visual world.

The disk includes a commentary from Gilliam and star Palin recorded for the original 2001 DVD release.

Criterion has created a new retrospective feature about the making of the film (40.49), in which Gilliam, producer Sandy Lieberson, star Palin and actress Annette Badland recount details of the production, the financing and Gilliam’s approach to directing.

Valerie Charlton (14:45) gives an account of designing and building the Jabberwock – and from the sounds of it, it’s amazing it turned out so well.

Cinematographer Terry Bedford (22:29) speaks of working on Holy Grail and Jabberwocky in an audio interview recorded in 1998 (over the phone).

The film’s opening was altered slightly between its original British release and the U.S. release; the restored version combines both – a slightly longer prologue followed by a voice-over and images from Bosch – but the original British opening, without the paintings and narration, is included as an extra.

A brief selection of Gilliam’s storyboards and the finished scenes based on them (7:00) is also ported over from the original DVD release.

Palin and Badland alternate through a reading of Carroll’s poem (1:27), and an original trailer (1:27) fails to clearly convey the nature of the film.

The booklet essay is by critic Scott Tobias.